Home > Style > Fashion > Your complete guide to the Adidas Samba, the sneakers connecting football and fashion Your complete guide to the Adidas Samba, the sneakers connecting football and fashion

Style
Your complete guide to the Adidas Samba, the sneakers connecting football and fashion
Share this article
Next article

Look up the history of any iconic sneaker and you can usually trace its status back to the moment someone famous wore it. That isn’t the case for the Adidas Samba.

Completing the trifecta of Adidas trainers along with the Stan Smith and the Superstar, the Samba was birthed out of necessity. In 1950, Adidas founder Adi Dassler introduced his brand’s first shoes as a solution to frozen football pitches. These trainers, crafted with innovative gum soles that offered superior traction, allowed footballers to train on ice.

You may also like…
Style
The history behind the hype: Adidas Stan Smiths
Style
Your complete guide to the Nike Air Presto, the iconic running sneakers that ruled the 2000s

Adidas wanted to debut its new sport shoes at the 1950 FIFA World Cup in Brazil, so the brand gave them a name that would stick with South American football fans: “Samba”, after the Brazilian music genre and dance style.

The Adidas Samba ended up being popular with football fans on the other side of the planet. Rowdy, loudmouthed English football devotees, also known as “casuals” or “hooligans”, adopted (or often, stole) the Samba sneakers as part of their unofficial uniforms, along with Stone Island jackets, FILA tracksuits and Fred Perry shirts.

These fans, whose style now informs streetwear and the wardrobes of celebrities like Drake, can be given half of the credit for the Samba’s enduring appeal. The other half belongs to the sneaker’s design itself. Having looked more or less the same throughout its 71-year history, Adidas’ oldest sneaker is a study of minimalism. It boasts a streamlined silhouette made with leather uppers, suede inserts, grippy gum soles and of course, the Three Stripes.

In many ways, the Samba is the unsung hero of Adidas. Since its debut, it has sold over 35 million pairs around the world, putting it just behind the Stan Smith in terms of sales. It has been referred to as “Europe’s Air Jordan”, but the Samba didn’t need any celebrity endorsement to find its place in sneaker history.

In fact, it’s the other way around. Today, you’ll find plenty of famous faces sporting the sneakers as a show of their style credentials. Rihanna has been spotted all over New York in them. So has Bella Hadid. A$AP Rocky customised his OG pair with neon green laces. And Frank Ocean may be singing about Nikes, but he paired his Prada with Sambas earlier this year.

If you, too, would like to earn your stripes as a sneakerhead, we’ve put together a list of the best Adidas Samba kicks you can cop now. Shop them below. 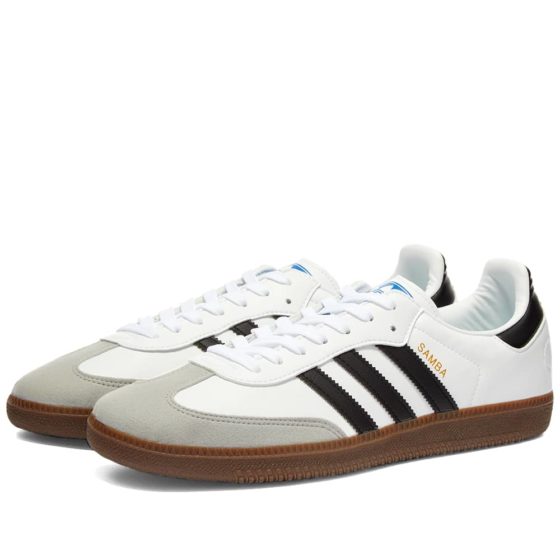 How do you update a classic? By putting a sustainable spin on it, like Adidas did with the Sambas earlier this year. This pair swaps the leather and suede combo for vegan-friendly materials, while sporting its original design. 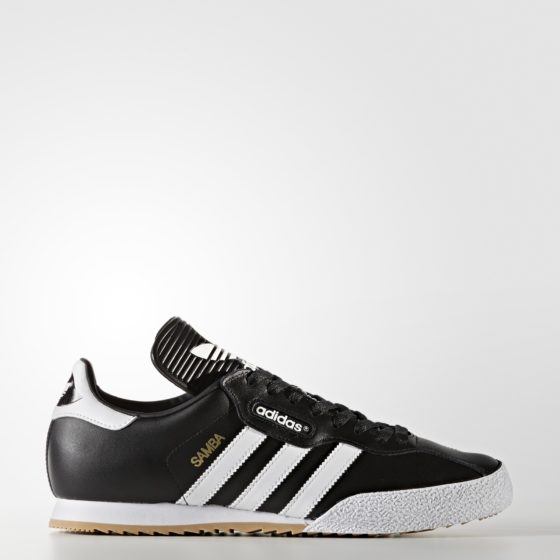 In the ’80s, Adidas launched the Samba Super, which was marked by its extra-large ribbed tongue and chunky rubber toe cap. Fans of the Danny Boyle film, Trainspotting, will remember it for entirely reasons: a burgundy pair was worn by its protagonist, who was played by Ewan McGregor. 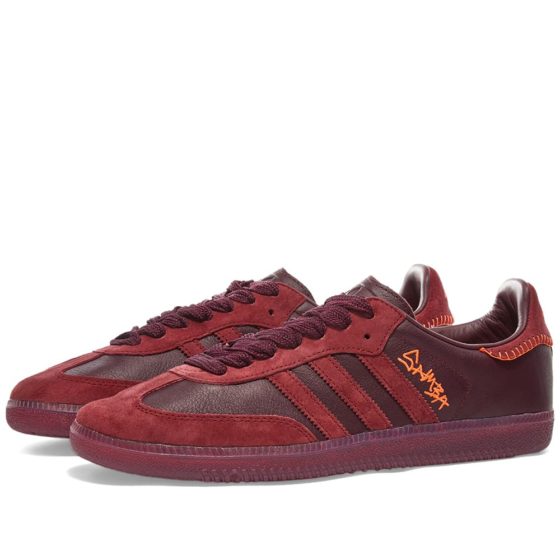 Superbad actor Jonah Hill is a super fan of the Sambas, which he got to remix for his Adidas collaboration in 2020. Inspired by skateboarding culture and Hill’s childhood in the ’90s, this maroon pair is a close alternative to the aforementioned kicks that appeared in Trainspotting. 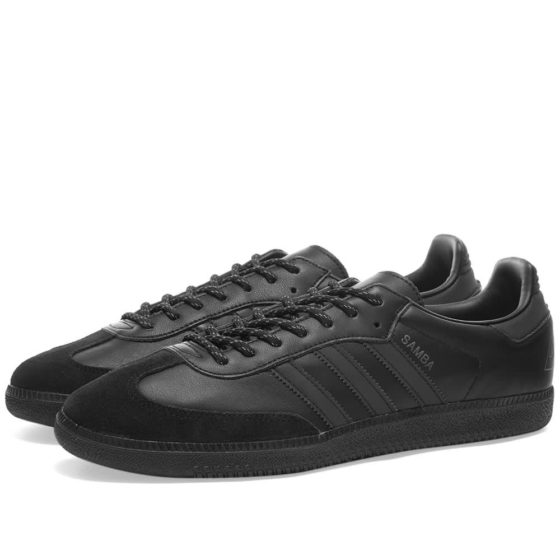 Pharrell is another tastemaker who has teamed up with Adidas to reinterpret it’s oldest sneakers. The musician designed the stealthiest Samba you can find, stripping the sneakers of all colour except one: black. 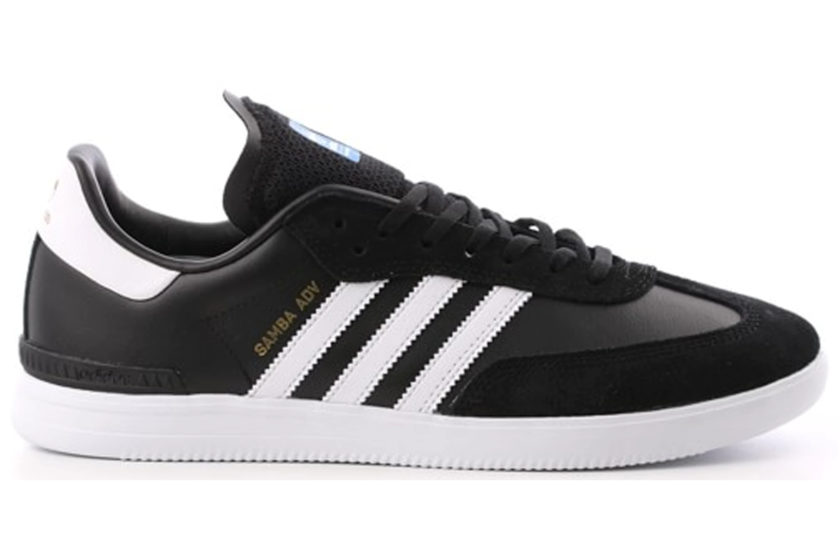 In 2016, Adidas remodelled the Samba for skateboarders. The Samba ADV boasts a more durable and cushioned design, featuring an internal mesh bootie for dynamic fit and a supportive, moulded heel clip. Last August, Adidas introduced its flashiest Samba yet: the LAFC edition, done up in black and metallic gold hues to mirror the colours of the Los Angeles Football Club. That, and the extended tongues certainly make the sneakers stand out. 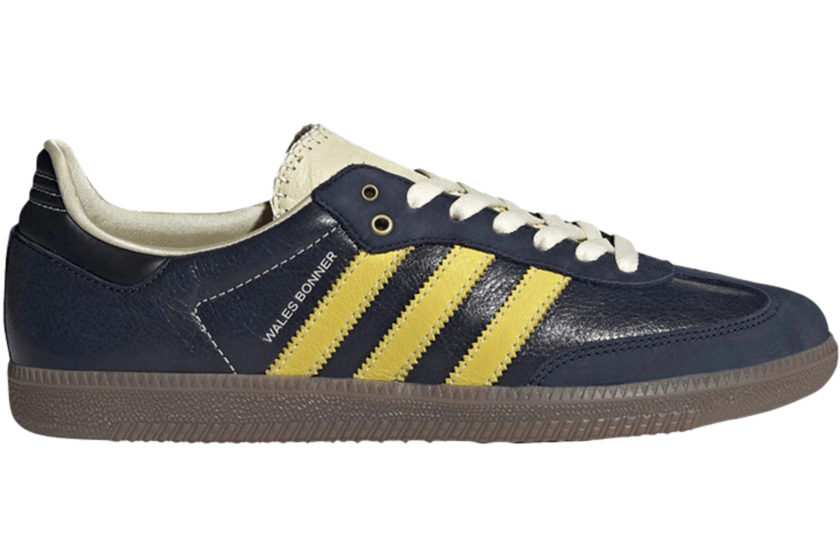 The hottest Sambas you can get right now are those offered in Adidas’ collaboration with the London luxury fashion brand, Wales Bonner. The shoes nod to the eponymous designer’s Jamaican-British heritage as well as the ’80s dancehall scene with its unique colourways. You’ll also find Wales Bonner’s signature topstitching throughout.