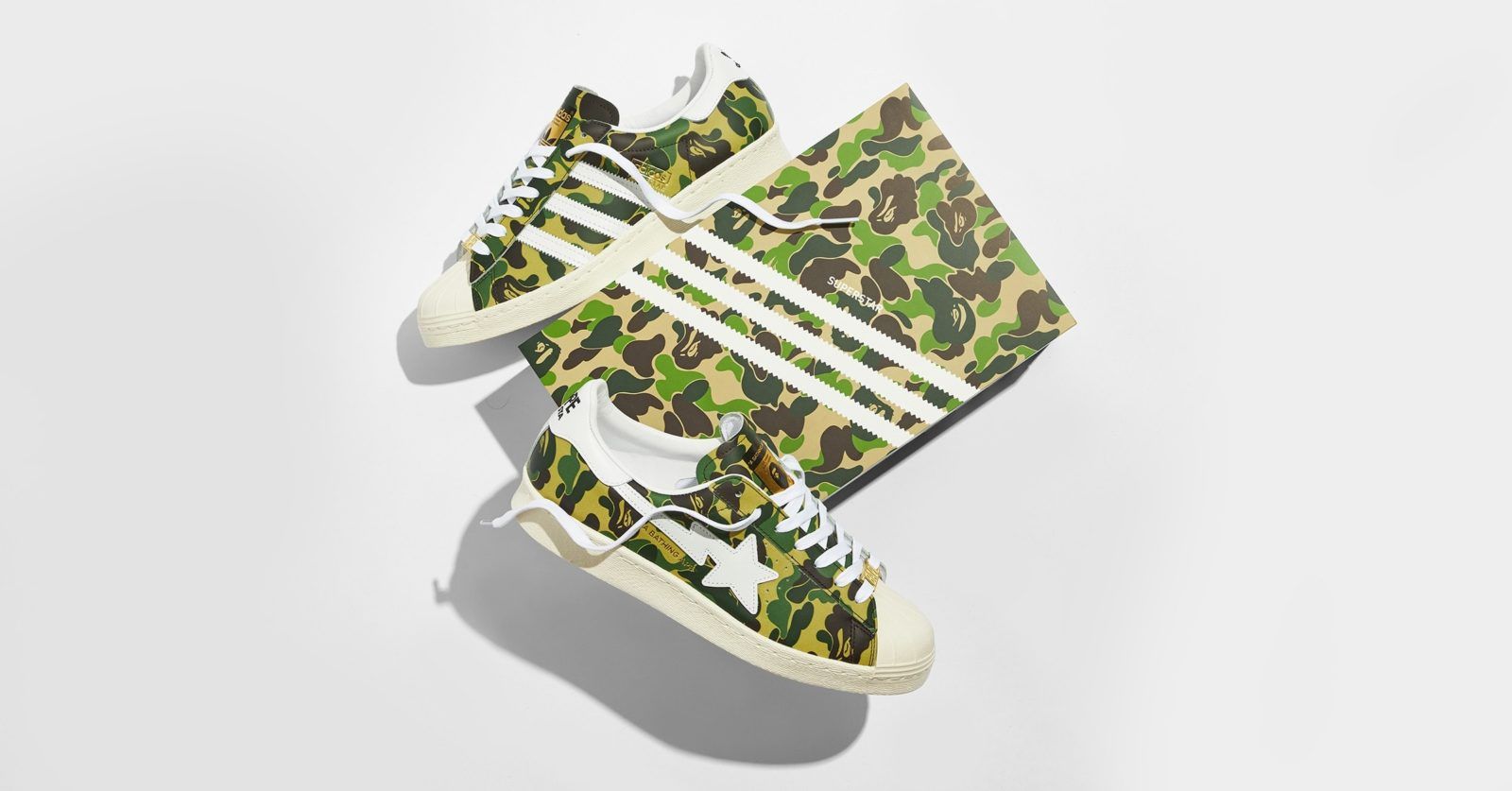 Between the sold-out releases of the Nike x Sacai Vaporwaffle and Travis Scott’s Air Jordan 6 collaboration, the last 24 hours would have been agonising for sneakerheads.

Still, there’s always another pair of limited-edition kicks to cop. This May, some of the exciting new sneakers up for grabs are from collaborations with Comme Des Garçons, A Bathing Ape, Vivienne Westwood and even Coca Cola. There’s also a couple of Air Jordan releases worth keeping an eye on, especially if you’re a serious collector.

You may also like…
Style
ASICS unveils its most sustainable sneakers yet, and they’re pretty fresh
Style
You can now customise Adidas sneakers at Singapore’s first MakerLab

For fitness buffs looking for high-performance shoes that will take their running to the next level, Adidas has refreshed its Ultraboost sneakers in vibrant new colours that will pop right off the track. But if you’re just shopping for something that looks fresh, maybe even get you a couple of compliments, Converse has just the thing.

Below, discover all our must-have sneakers for the month of May.

For Spring/Summer 2021, Commes des Garçons unveiled its latest Nike collaboration: a refreshed take on the latter’s 1993 Air Carnivore sneakers. The Japanese label has stripped it of its colours, offering the mid-top sneakers in black and white versions that sport reflective 3M elements. Aside from the Nike-branded strap that featured on the original Air Carnivores, designer Rei Kawakubo has also included her label’s branding on the heel. The shoes aren’t exactly new — they were released in Tokyo last year — but now you’ll get the chance to own a pair when they launch at Dover Street Market Singapore and Comme des Garçons Hilton on 1 May.

If there’s one thing straight Singaporean guys can’t get enough of, it’s Hawaiian shirts. Now, they can sport them even on their feet thanks to Converse’s latest collaboration with Beyond Retro, a European vintage clothing retailer. Using second-hand Hawaiian shirts sourced from across America, Converse has created tropical-themed uppers for its beloved Chuck 70s sneakers. The upcycled nature of the collection means that no two pairs are alike, but rest assured they’ll all feature a distinctive pattern of leaves and florals. The rest of the shoe is just as green: the laces are made entirely from recycled materials, while the outsoles, tongues and heels are partially crafted with recycled waste, polyester and cotton. Get yourself a summery pair at Converse’s equally eco-friendly flagship store at Jewel Changi Airport.

After collaborations with Converse and Kith, you’d think that Coca-Cola has dabbled enough in the world of sneakers. Not quite. This time, the American soda company has teamed up with ASICS for a sustainable take on the latter’s GEL-QUANTUM 90 TYO runners. The uppers and midsoles are made with four water bottles’ worth of recycled polyester, while the sockliner, also crafted from recycled materials, was dyed with a technique that uses less water and ink. The effect is no less striking, though: the shoes come in Coke Red and White colour combinations, featuring Coca-Cola’s logo on the side and a green heel inspired by the iconic Coke glass bottle.

Streetwear legend A Bathing Ape is bringing its beloved camouflage print back in a whole new way: through a pair of Adidas Superstars. Besides its military-inspired pattern, Bape had made its mark on the cult-favourite sneakers with branding on the heel, the side, the laces and in the form of an ape graphic in gold foil on the tongue. For a sneaker collaboration that feels pretty nostalgic, this pair will surely be much sought-after for years to come. Try your luck at getting them when they release on 7 May.

Speaking of nostalgia, remember the Air Jordan 1 KO? The sneakers, which were basically a canvas version of the leather AJ1s, first debuted in 1986, and were later re-released in 2010 and 2014. If you didn’t manage to snag a pair of the striking red, white and black high-tops in any of those years, you will now get another chance. Nike is set to reissue them in its iconic “Chicago” colourway on its SNKRS app on 12 May, so keep your eyes peeled.

ASICS’ two-year collaboration with Vivienne Westwood is now wrapping up with their final (and most fire) drop of 2021. Enter the GEL-KAYANO 27 DE sneakers, which features Westwood’s penchant for deconstruction by baring the very elements of the shoes. Each toe cap stops short to reveal a net layer beneath it, which runs all along the shoe. Below that are the shoes’ uppers, which are made with ripstop fabric that is favoured by the military for its strength and durability. Speaking of functionality, the GEL-KAYANO 27 DE features ASICS’ GEL technology cushioning that makes the Japanese brand a favourite among runners. The new sneakers, which will launch in Lichen Green/Ox Brown or White/Lichen Rock colourways on 1 May, are sure to turn some heads.

It’s a year of collaborations for Rick Owens, with the Paris-based designer teaming up with everyone from Dr. Martens to sportswear brand Champion over the last few months. Now, Owens continues his winning streak with sneaker label Veja with their fourth collection. This time, the two brands have updated Veja’s Runner Style 2 shoes in four new colours and sustainable materials: recycled polyester for the upper, and a mix of sugar cane, banana oil, Amazonian rubber and rice waste on the midsole.

Following iterations of Reebok’s Instapump Fury high-tops and Club C sneakers, Maison Margiela continues its partnership with the sportswear brand with the brand new Tabi Instapump Fury Oxford. As the name suggests, the shoes feature a Derby-inspired upper that’s split at the toe — a nod to the iconic Tabis. The shoes are also given a boost with a heeled boot design borrowed from the Instapump Fury. And they’re made all the more striking with three colourways: white, black and yellow/red.

In terms of appearance, Adidas’ high-performance Ultraboost runners have not been the most adventurous. The sportswear giant is changing that with a new collection, fittingly inspired by its vibrant ZX sneakers that were staples of the ’80s acid house rave scene. The Ultraboost 1.0 DNA sneakers have been reworked into three new colour combinations: “Aqua” is almost entirely in light blue, down to the soles, with neon yellow accents; “Turquoise” has mint green uppers that are contrasted with a red sockliner, and “Cream White” features the most colourful stripes of all three. We don’t know a more motivating way to hit the track than by putting on a pair to show off to everyone else. But first, you have to win them through a draw on 7 May.

Nike has just rolled out the freshest pair of Air Jordan 11s you’ve ever laid your eyes on. Basically a rebranding of the “Columbia” colourway that was first unveiled in 1996, the new “Legend Blue” Jordans boasts a clean look consisting of a full white upper, black sockliners, and icy blue soles. The low-cut sneakers are also numbered on the insole with “25”, referencing the 25th anniversary of the colourwy. If you missed the drop on Nike’s SNKRS app, try your luck on eBay.

Shopping Sneakers Adidas Rick Owens Nike Maison Margiela Reebok Asics veja Converse
Pameyla Cambe
Senior Writer
Pameyla Cambe is a fashion and jewellery writer who believes that style and substance shouldn't be mutually exclusive. She makes sense of the world through Gothic novels, horror films and music. Lots of music.
Fashion Style Jewellery
Sign up for our newsletters to have the latest stories delivered straight to your inbox every week.