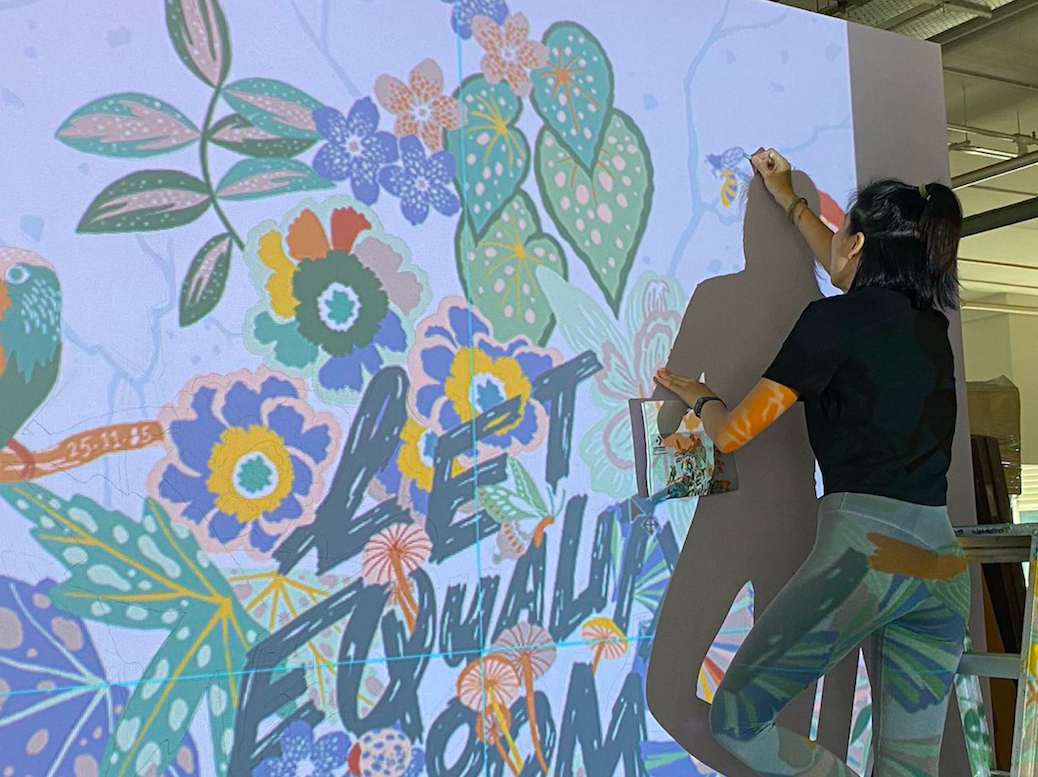 When Converse announced that its first Singapore flagship at Jewel Changi Airport was sustainable, its claims seemed dubious.

Surely it was another case of greenwashing — how can a sneaker store be good for the environment?

The answer lies in the mural that greets you once you arrive at the store. (Conveniently enough for sneakerheads, it’s situated right next to New Balance and is near to Foot Locker.) The artwork, which livens up the space with its pastel hues, depicts a sapling growing out of a Converse high cut sneaker. There’s a clever pun in the featured slogan, “One Step Is All It Takes”. But the best thing about the mural is something you can’t even see: it clears the toxins in the air.

That’s thanks to the special paint used, known as Graphenstone, which has photocatalytic properties. In English, that means that the paint uses light to break down toxic substances in the air, like carbon dioxide, into harmless particles — much like trees.

The mural is one of several around Jewel; you can see another nature-inspired one at the back of the flagship, featuring defective Converse sneakers that have been repurposed into painted petals. And, just a short walk away from the store, you’ll find one by local artist Tan Zi Xi (@messymsxi), which has the air-purifying power of nine trees.

So far, Converse has “planted” over 8,000 trees around the world with its Converse City Forests murals. The project, introduced in 2020, has brought “sustainable street art” to cities like Bangkok, Manila, Jakarta and Warsaw, absorbing air pollutants in place of actual plants.

It’s an ingenious idea, especially in the wake of a pandemic that has left us masked up all the time. In fact, we spent a good deal of last year thinking about fresh air when we were confined to our homes during the circuit breaker.

In America, the idea of breathing — or not doing so — was associated with the killing of George Floyd, which reignited the Black Lives Matter protests months after the Australian wildfires. And let’s not forget that shortly before, teenage eco-activist Greta Thunberg was reminding the world of the threat of air pollution and urging us to join the climate change movement to give up flights.

All of which is to say: clean, breathable air has never been more precious. So thanks, Converse.

The City Forests murals aren’t all that the shoe brand has done in the name of preserving the environment. In 2019, it launched its Converse Renew collection of sustainable Chuck Taylors made from used plastic bottles. It recently added its signature badminton shoes, the Jack Purcells, into the mix as well. Even its decision to open its first flagship here was a mindful one, given that Jewel Changi Airport is an eco-friendly establishment.

And the City Forests murals in Singapore addresses more than just environmental issues. Through her artwork, Zi Xi roots for gender equality; you’ll discover Singapore’s milestones towards achieving it by interacting with her mural through Converse’s City Forests Instagram filter.

Which brings us to that other source of freshness at the Converse flagship — the artists. The in-store murals are the collaborative efforts of Zi Xi, as well as four young local creatives that she mentored: Kitty Yu (@kittyujg), Hanirusyaidi Subhan (@hanzbaobao), Hariz (@haha.hariz) and Seth Hoo (@sethhoo).

All four are members of Converse’s All Stars grassroots program, which scouts emerging talents across different disciplines around the world and offers them creative opportunities, training and workshops. The All Stars program especially looks out for youths whose passions lie in activism, sustainability, inclusivity and diversity.

For Hanirusyaidi and Hariz, who are both pursuing Communications Design degrees, the Converse City Forests murals mark their first physical, public art installation.

“Working with Zi Xi has taught me a lot about discipline,” said Hanirusyaidi, who joined the All Stars program in 2019. “I could figure out that fine line as to how to combine [my sense of artistic] freedom with discipline to make my work better.”

Hariz was commissioned by Converse to design their holiday lookbook last year, but this was his first creative project with the brand that wasn’t solely on the screen. “Zi Xi taught me a lot, not just about technical skills, but also about the significance of the details in your artwork, like a leaf or a letter.”

Or like the use of Graphenstone. The next time you’re in Jewel to get yourself a Shake Shack burger, be sure to drop by Converse’s new flagship store. Don’t worry, it doesn’t have that fresh paint smell.