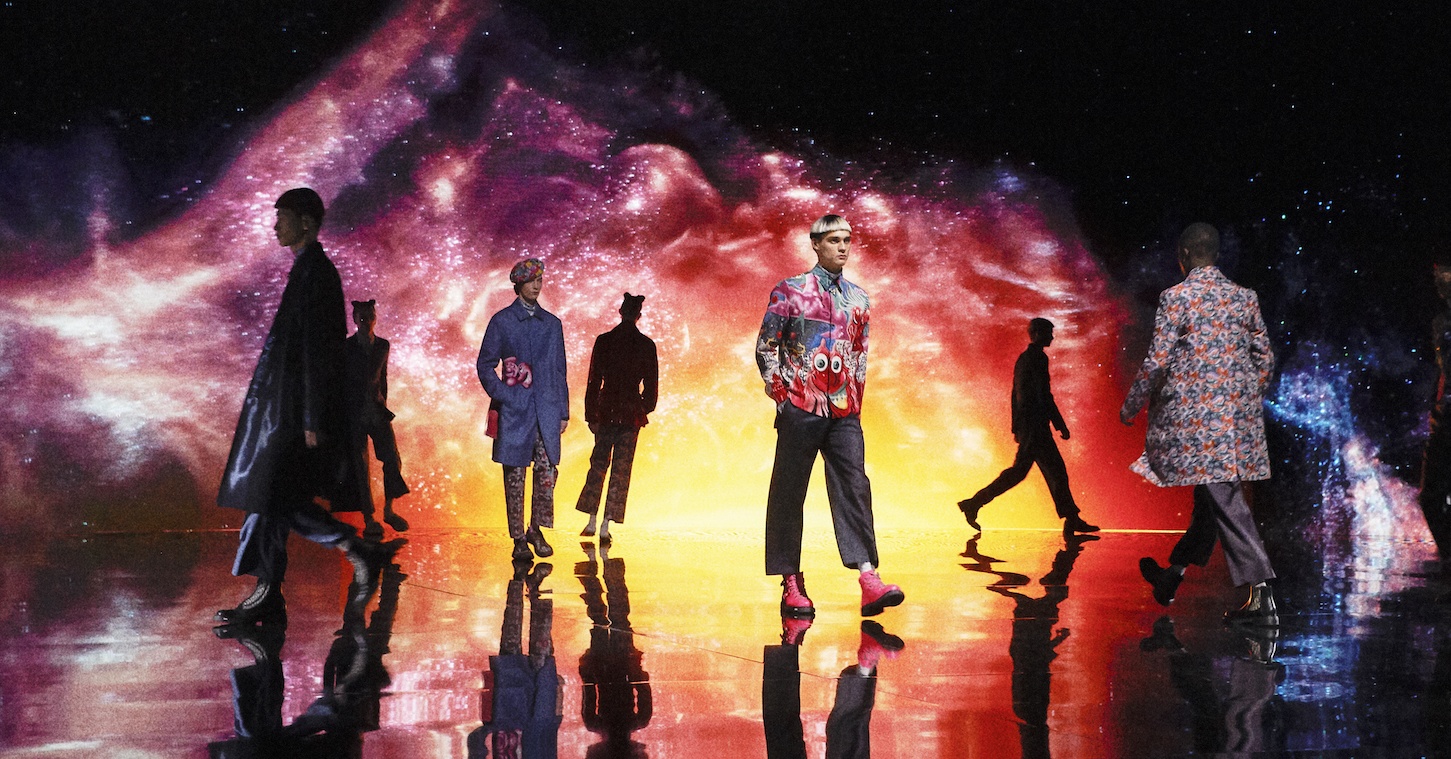 Considering where Planet Earth seems to be headed, it’s tempting to seek an escape in the cosmos.

But we’re not Elon Musk, so we (happily) settle for the next best alternative: Kim Jones’ latest Dior Men show. The livestreamed event took us through time and space to unveil the Fall/Winter 2021 collection, featuring the works of American painter Kenny Scharf. (Dior is big on artistic collaborations, after all.)

Instead of outer space, it was the Dior universe that Jones explored and expanded. His latest menswear offerings, comprising relaxed tailoring and lounge-y pieces, were enhanced by a riot of colour (courtesy of Scharf’s art), stunning craftsmanship (realised in the Dior atelier) and couture connections to Christian Dior (dug up from Maison’s archives).

All of this is easy to miss on the pixels that we saw the collection through, which is why we’ve listed the highlights from the Dior Men show below.

The show set was out of this world

It’s too bad that the Dior Men show was staged during the pandemic, because it was a cosmic spectacle worthy of an audience. The runway was engulfed by the stunning imagery of Thomas Vanz, a French filmmaker with an obsession of outer space. His psychedelic swirls and stars, which may well be what Noel Gallagher envisioned when he penned the phrase “Champagne Supernova”, looked straight out of The Mandalorian, the Star Wars sequel series Kim Jones has been inspired by.

The Dior designer also looked to the past, with a macro lens on the creative scene that was bubbling in Manhattan’s East Village in the 1980s. There was Deee-Lite, the eclectic dance music group that epitomised inclusivity before it become a buzzword. Their dancefloor hits “What is Love?” and “Pussycat Meow”, which soundtracked New York nightclubs, were revived and remixed specially for the Dior show by vocalist Lady Miss Kier. Her fellow member DJ Dmitry’s manbuns were also sported by quite a few Dior models — a look that we would love to see on the Maison’s ambassadors like Robert Pattinson and A$AP Rocky.

’80s New York was also the playground of artists such as Keith Haring, Jean-Michel Basquiat and Kenny Scharf, the last of which is Kim Jones’ artist obsession of the season. (He previously collaborated with the likes of Amoako Boafo, Daniel Arsham and Hajime Sorayama.) Scharf’s sci-fi-tinged, Pop Art works coloured the collection, appearing as prints and embroidery across pajama-style shirts and trousers (fashion is still in its loungewear phase, clearly), zipped jackets, coats and this season’s Dior Saddle bag. Scharf also created drawings of animals from the Chinese zodiac, which became the playful motifs of sweaters in the collection.

This season, traditional Chinese textile techniques were revived at Dior’s French atelier. Scharf’s artworks were brought to life across the clothing pieces with seed embroidery, one of the oldest embroidery techniques in the world. It’s also among the most intricate, requiring artisans to create tiny, wrapped loops of yarn (or “seeds”). On the tamborin-style berets designed by Stephen Jones, Scharf’s cartoons were recreated with thousands of tiny pearls using a Chinese beading technique. Despite the pandemic, Dior wasn’t bound by time or space this season.

There was no front row at the show, but Dior did get the people who would have been there to model looks from the collection. That includes Kim Kardashian, who donned a blue Dior Oblique suit cinched by a moire bow belt and accessorised with lace gloves, monogrammed slippers and the aforementioned beret. Other celebrities who sported head-to-toe Dior are Batman star Robert Pattinson, Kate Moss, Bella Hadid, J Balvin, Gwendoline Christie and Lily Allen.