Home > Style > Fashion > The Dior Saddle bag saga, and why it is back for good 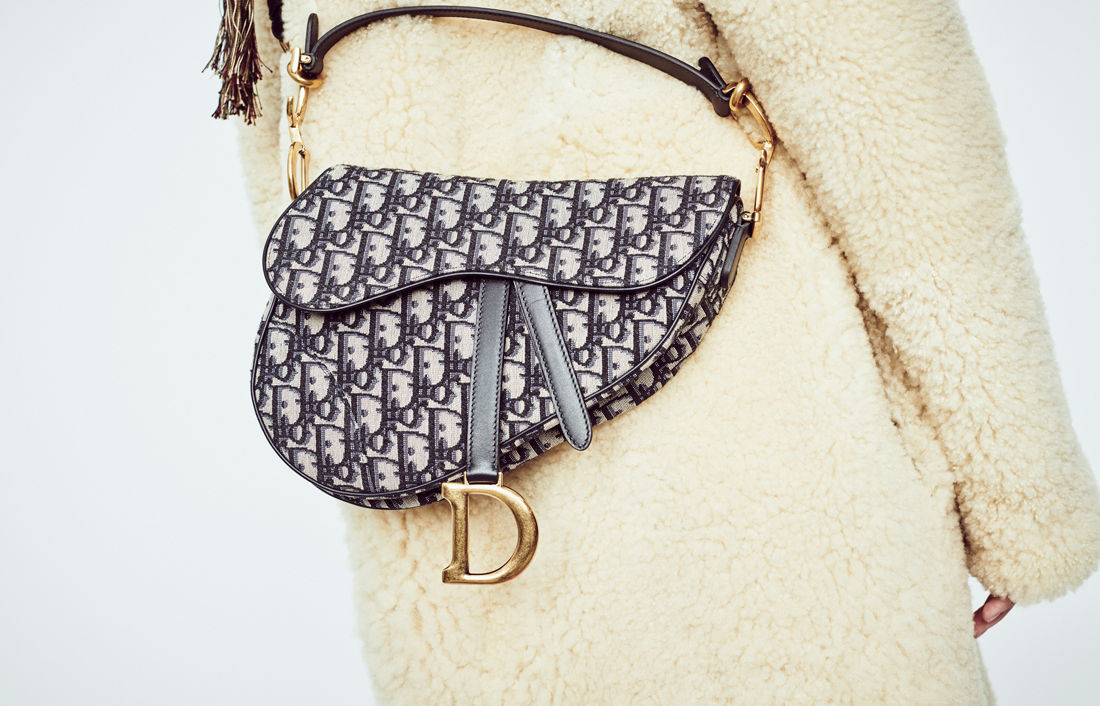 The Dior Saddle bag saga, and why it is back for good

The zany-shaped Dior Saddle bag stole the limelight at Maria Grazia Chiuri’s Fall 2018 show earlier this year. Its off-kilter silhouette, unsurprisingly, is the first thing that catches your attention. You begin to ponder whether this avant-garde of a bag even belongs to this decade we’re in. And you’re absolutely right — it’s not.

The Dior Saddle was the emblematic accessory of the ’00s. Dangling from the crook of many noughties icon’s arms — Carrie Bradshaw to Paris Hilton — this equestrian-inspired crescent was then-creative director John Galliano’s offspring which first debuted in his Spring 2000 collection for the French house.

It ticked every implicit requisite required of an It-handbag at the turn of the century. Monogram-swathed insouciance, check. Conspicuous gilded logo charm, right there swinging in sync with your stride. Most crucially though, it was a total encapsulation of Galliano’s feted kitsch — a definitive authority to the period’s more-is-more aesthetic.

In late 2000, Sex and the City’s Season 3 Episode 5 aired on television. Carrie Bradshaw went on her second date with Aidan clasping a chain-printed Saddle bag under her arm. The fictional fashion figure’s seal of approval further propelled the cult-like mania for the jaunty-chic purse. Paris Hilton practically had her white leather iteration glued to her shoulder, towing it to all her papped parties. Lauren Bush had an ultra-mini one, slinging it on for a Dior fete in 2003.

Alas, as hypes go, the Saddle hysteria eventually petered out. It was no longer on the runways by 2007. And after Galliano’s anti-Semitic rant four years later, all traces of the once-hallowed designer was wiped clean. You may call it the Raf Simons minimalist purge, to be exact. The newly appointed creative director signalled a new era, digging deep into the house’s pre-Galliano archives, skewing a 180-degree take on the French house. The Saddle was discontinued. Existing ones were pushed further back into the unseen depths of the closet. Everyone forgot about the eccentric has-been.

Or so we thought. In 2014, Beyoncé was among the first to dig out her pony hair version. Still, it wasn’t till early 2016 that Vogue pinpointed a piqued mass interest in the bag, all in due thanks to K-pop inamorata CL who swung out a ’gram-worthy limited edition piece printed with the portmanteau “Adiorable”.

After almost a decade of absence, the Saddle’s sabbatical granted it a vintage gem status. Demand surged through the roof. Vintage resellers sold them like hotcakes. But why now?

The noughties, as we know it, is undergoing something of a renaissance. Fashion’s well of inspiration is subculture nostalgia. And by now, designers have mined almost everything that could be extracted from the ’70s, ’80s, ’90s — leading nowhere else but to the inevitable unearthing of the ’00s, the open minefield of questionable taste.

The past few seasons have revelled in fanny packs, cargo pants and it’s-so-bad-it’s-good kitsch. Vintage Saddle bags have been spotted on the likes of today’s girl-about-towns Bella Hadid, Kendall Jenner and Elsa Hosk. Chiuri, possibly sensing the change of tides, decided this season is primed for an official return of the aughts symbol.

The artistic director waxes lyrical about its shapeshifting transcendence on a press statement: “I consider this icon of the house’s recent history the perfect accessory to deal with this battle that is daily life. Indeed, the Saddle is a bag that is worn in exactly the same way as a shirt or jacket, and it’s so comfortable to wear with its long strap that you almost forget it’s there… like a chameleon, it adapts to all situations.”

Chiuri highlights this versatility through her Fall 2018 resuscitations, which include its classic Toile Oblique jacquard monogram, but larger, as well as a wacky motley-fringed version.

Freshly hitting stores today, we’re predicting the Saddle won’t stay idle on the shelves for long. And to give further pause for thought: What better way to get on the noughties bandwagon, other than through its most consummate incarnation? Giddy up, it’s high time we ride on the Saddle.