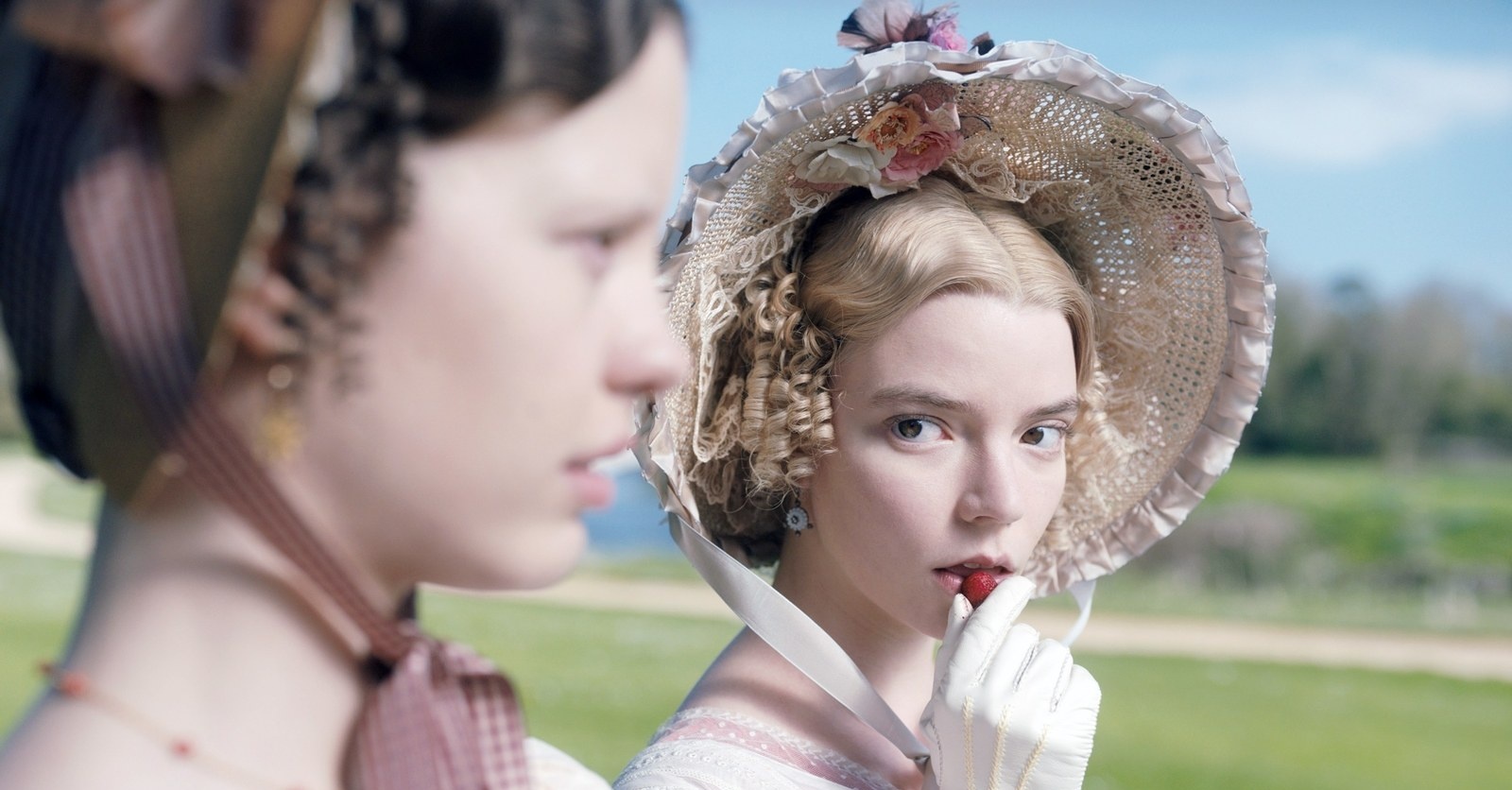 “Handsome, clever and rich” is how Jane Austen described the titular character of her novel, Emma. If she saw Autumn de Wilde’s refreshing film adaptation of it, she would add another adjective to the list: stylish.

Anya Taylor-Joy, who plays Emma, is irresistibly so in the new film. That’s partly thanks to director de Wilde’s vision. There have been six adaptations of the Jane Austen novel thus far (seven if you count Clueless), but de Wilde’s version sets itself apart with its modern, strictly symmetrical look.

Unlike other period films, Emma also has a distinctively pastel-hued colour palette. You could call it Wes Anderson-esque, but it would be more accurate to compare the film to Sofia Coppola’s Marie Antoinette, which de Wilde drew inspiration from.

Those delightful colours trickled into everything from the film’s interiors to its costumes, stitched together by costume designer Alexandra Byrne. Having previously worked on historical dramas like Elizabeth and Mary Queen of Scots, Byrne knows a thing or two about bringing traditional English dressing of yore to life. For Emma, though, she also created looks that could easily be adapted for today.

Emma’s Regency-era frocks, all frills and puffed shoulders, come in the same trendy soft hues that were spotted on the Spring/Summer 2020 runways of Gucci, JW Anderson and Sies Marjan, to name a few. Their feminine silhouettes are also the stuff of collections by Minju Kim, Molly Goddard and Simone Rocha. And Emma’s lavish adornments, meant to underscore her high social standing, is very much in line with our love for striking accessories that will earn a like or two on Instagram.

If you are just as besotted by Emma’s elegant 19th-century style as we are, here’s how you can pull it off without looking like a Jane Austen cosplayer.

As expected of one of the richest residents of Highbury, Emma Woodhouse’s clothes are rife with details. Think puffed shoulders and ruffled layers, all to spruce up the modest Regency-era uniform of high-neck, Empire waist dresses with maxi skirts. Go for those in sheer, light fabrics that are just as perfect for today’s summer dressing as they were for the English countryside that Emma called home. This Brock Collection dress, for example, features a romantic layer of embroidered tulle. You could also go for a shorter hem (it is, after all, the 21st century), like the one in this Cecilie Bahnsen dress. And if you’re looking to bring Emma’s style into the evening, how about this ruffled lamé dress by The Vampire’s Wife?

Almost as delightful as Emma’s charms are the ones she wore. Her jewellery of choice included an array of drop earrings and dainty pendant necklaces. If you want to be really on-trend this season, pick out accessories with pearls, like these Simone Rocha earrings. Just as embellished — and unapologetically feminine — is this crystal drop pair by Erdem. And for your neck, a heart pendant necklace is good enough to spell out your romantic nature.

Emma’s tightly coiled curls are often adorned with equally striking hair accessories. Thankfully, hats, headbands and hair clips are very much in today, so go forth and accessorise. Your sun hat of choice needn’t be as elaborate as the feathered and frilled ones Emma wore; this lace one by Valentino will do just as fine, especially with its contemporary bucket hat shape. You can also steal the show at your next soirée like Emma with this embellished Givenchy headband. And for everyday glamour, make a statement with a pretty hairclip or two, or top off your coiffure with a bow.

Emma, who often lords over her friends and the other villagers, does so without the help of high heels. Instead, she followed the practical attitude of the Regency-era dressing. Satin and silk slippers, as well as low-heeled leather boots, were often the order of the day when people mostly travelled on foot. Today, you can find a match in an array of ballet flats. The glamourous Emma herself might have preferred this crystal-encrusted pair from Miu Miu. On the other hand, these comfortable Alexa Chung flats are more suitable for the everyday. And for a smarter look, slip on these pink leather booties.

Shopping Film fashion and film anya taylor-joy autumn de wilde
You might also like ...
Style
How Wes Anderson’s quirky aesthetic has inspired fashion
Style
How to work pearl accessories like Harry Styles
Pameyla Cambe
Senior Writer
Pameyla Cambe is a fashion and jewellery writer who believes that style and substance shouldn't be mutually exclusive. She makes sense of the world through Gothic novels, horror films and music. Lots of music.
Fashion Style Jewellery