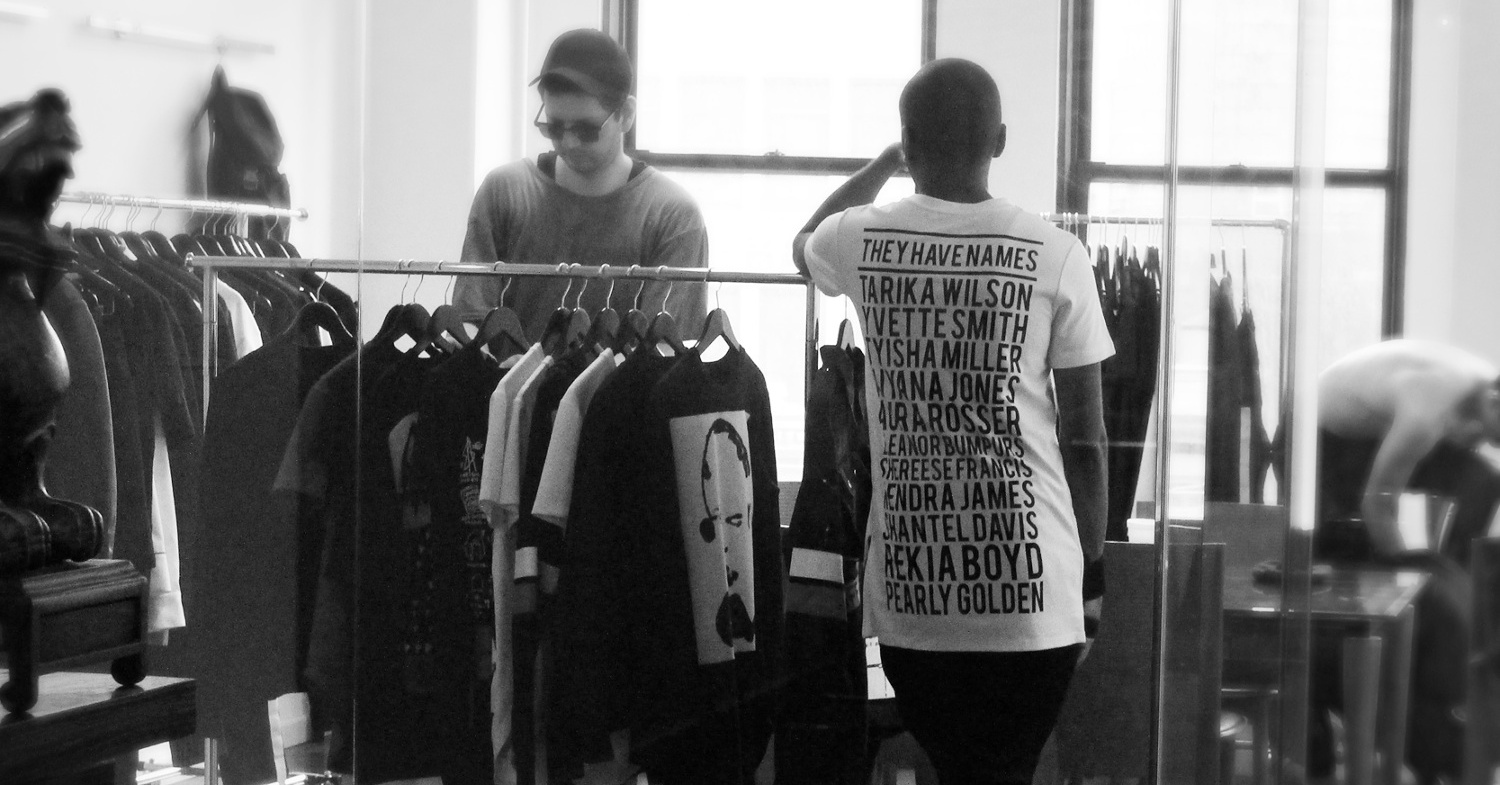 Following the racially-charged killing of George Floyd, a black American citizen, at the hands of a white police officer named Derek Chauvin, countless supporters of the Black Lives Matters movement have taken to the streets for anti-racism protests.

That’s not just in major US cities like New York, Los Angeles or Minneapolis, where the murder took place, but also beyond: protestors have held demonstrations in Berlin, London, Toronto and more, while others around the world are raising awareness for the political cause on social media with the hashtag, #blacklivesmatter.

Among the latter are fashion designers like Marc Jacobs, Donatella Versace, Clare Waight Keller, Silvia Fendi, Zac Posen, Alexander Wang and Balmain’s Olivier Rousteing, who is one of only two black designers at the helm of a major luxury fashion brand. The other is Virgil Abloh, founder of Off-White and creative director of Louis Vuitton, who shared a now-deleted Instagram post criticising protestors for looting streetwear stores. For his part, Abloh has also donated US$50 (S$70.32) to the Fempower Bail Fund in Miami, which is roughly half the cost of the now sold-out Off-White face mask.

Fashion behemoths like Louis Vuitton and Gucci — which recently launched a campaign to raise funds for domestic violence victims — have also used their popular social media accounts to add to the conversation on racial injustice. So, too, have sportswear giants Nike and Adidas. For the first time, the multi-billion dollar companies set aside their rivalry to support Nike’s #UntilWeAllWin campaign, which shared the following message:

But the most significant contributions to the Black Lives Matter movement thus far have mostly come from smaller, independent fashion brands, who bear the brunt of the economic impact of the COVID-19 pandemic. Below, we list all the labels that have taken their activism one step further by donating to various funds to fight racism.

After archiving all of its Instagram posts except the ones related to #blacklivesmatter, London label Asai announced that it will be selling a previously unreleased dress that was worn and made covetable by Rihanna. The sales from the iconic dress, which retails at £300 (S$522.71), will benefit not just Black Lives Matter, but also Solace Women’s Aid and UK-based The Voice of Domestic Workers.

To aid the Black Lives Matter movement, Asos has announced to its 10.3 million Instagram followers that it will be “making a donation to a relevant organization”. In its statement, the online fashion retailer also urged others to speak up against racism: “Silence isn’t an option. We share the sorrow and outrage of the world over the grave injustice leading to the tragic loss of George Floyd’s life, along with Breonna Taylor, Ahmaud Arbery, Tony McDade and so many other Black lives.”

FILA will be making a US$100,000 (S$140,635) donation to Black Lives Matter, according to its latest Instagram post. The sportswear brand also goes on to encourage its followers to “take the necessary steps alongside us for a more equal and just tomorrow.”

Aside from sharing resources for its followers to educate themselves on racism, as well as initiatives to donate to, Helmut Lang is also making a donation to the American Civil Liberties Union (ACLU).

While highlighting other black victims of police brutality in America, Kith’s latest Instagram statement declares that it’s “committed to utilising our voice and resources to stand for the safety of our citizens, friends, family and neighbours in productive ways that we pray will spur the change we all need.” The streetwear fashion retailer also links the various organisations and petitions that it will be funding, such as the Minnesota Freedom Fund, the ACLU, the Children of Promise, NYC, and a GoFundMe fundraiser by George Floyd’s family.

Brendon Babenzien, founder of New York menswear label Noah, has shared a personal statement on the brand’s website reflecting on white privilege and racism in America, along with a list of resources for fans to contribute to the Black Lives Matter movement. This isn’t the only time that the former Supreme creative director has spoken up on racial injustice: in 2016, following the killings of Philando Castile and Alton Sterling, Babenzien sold Black Lives Matter T-shirts and donated all proceeds to the cause. Noah had also previously encouraged returns of their merchandise from Trump supporters, stating that it did not support “his brand of madness.”

Puma took to Instagram to announce its decision to support the Minnesota Freedom Fund, declaring a “need to take action together.” In its post, the sportswear brand also shared an iconic photo: one of African-American athlete Tommie Smith, with his Puma shoes off, raising his fist in a Black Power salute at the 1968 Olympics. The gesture, which was meant as a protest against racial inequality and poverty, cost Smith his gold medal and earned him death threats. Despite the backlash, Puma has continued to support the athlete and his cause. In 2018, the brand launched its #THIRDSALUTE social media campaign in honour of Smith, donating up to US$100,000 (S$140,635) to the ACLU.

Pyer Moss founder Kerby Jean-Raymond is known for using his fashion label to highlight social justice issues. In 2015, he raised awareness for the Black Lives Matter movement with his second runway show. Despite receiving  death threats and being dropped by several fashion publications and retailers, he continued his political streak. His F/W 2016 show nodded to the suicide of MarShawn McCarrel, a Black Lives Matter activist, while his S/S 2016 collection was marked by the slogan, “I can’t breathe” — the last words of Eric Garner. He listed the names of other victims of police brutality on his “They Have Names” T-shirt, which was later updated with more names and worn by Colin Kaepernick. The activist designer has also frequently called out the fashion industry for appropriating and exploiting black culture. Now, he continues to speak up about Black Lives Matter on his Twitter and Instagram accounts.

Besides donating to the NAACP Legal Defense Fund, a civil rights law organisation in America, Stella McCartney is encouraging her Instagram followers to do the same with a link to donate.

New York label Telfar, which has long championed diversity with its unisex clothing line, is also a supporter of the Black Lives Matter movement. In honour of Black History Month in 2019, the brand collaborated with the Black Lives Matter Global Network for a limited-edition slogan T-shirt, donating all proceeds from its sale to the anti-racism cause.

Puma Kith Noah pyer moss telfar black lives matter
You might also like ...
Living
How to support the Black Lives Matter movement from Singapore
Living
These local companies have formed a fundraising collective to help migrant workers
Pameyla Cambe
Senior Writer
Pameyla Cambe is a fashion and jewellery writer who believes that style and substance shouldn't be mutually exclusive. She makes sense of the world through Gothic novels, horror films and music. Lots of music.
Fashion Style Jewellery