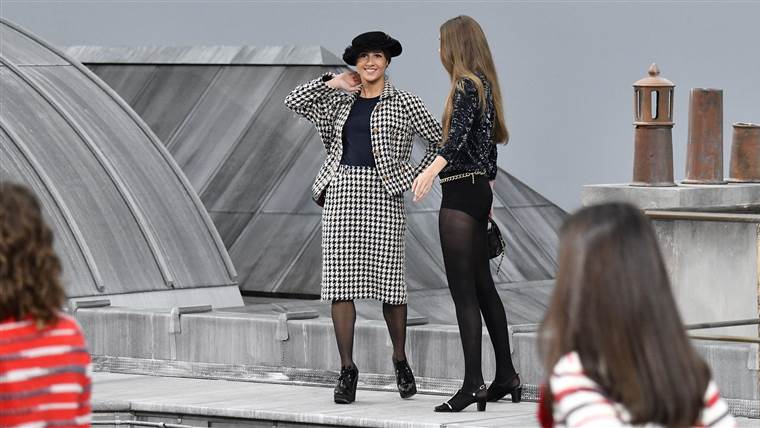 This week, supermodel best friends Gigi Hadid and Kendall Jenner have made it to the headlines yet again. Hadid confronted an intruder at Chanel‘s runway during Paris Fashion Week which became a debatable hot topic, while Jenner stars in her latest job as a graceful mermaid in an Italian short film for Reserved. For product launches, Louis Vuitton serves us its fun-sized Airpod casing clad in Vuitton’s classic leather monogram and gold detailing. Virgil Abloh and Evian are to

release yet another water bottle design, Coach creates ‘Naruto’ capsule collection in collaboration with Michael Jordan B and Puma announces a partnership with G-Eazy while keeping their 2020 sneaker design under wraps.

It looks like there was a catfight on Chanel’s catwalk. At Chanel’s show during Paris Fashion Week, Supermodel Gigi Hadid went head to head with an intruder who turned out to be a French comedian and YouTuber named Marie Benoliel. As Benoliel neared the catwalk and managed to claw her way up on stage for the final walk, her plan to disguise as a Chanel model (wearing her borrowed Chanel tweed set) was intervened by Gigi Hadid who then confronted her and escorted her offstage.

Virgil Abloh, who works with Evian as their ‘Creative Advisor for Sustainable Design’, has launched another water bottle stylishly cloaked in his latest “Make A Rainbow” design. The wordings on the Evian bottle sports Abloh’s classic font but allows light to refract through the water droplets. This design is exclusive at selected retail locations in Asia and France.

Michael B Jordan is apparently an avid fan of Japanese Manga series Naruto. Now, he’s joining hands with Coach to launch an exclusive capsule collection of T-shirts and jackets inspired by his love for the anime. This collection will be available on 3 October at Wisma Atria and The Shoppes at Marina Bay Sands.

G-Eazy and Puma announces sneaker collaboration to arrive in 2020

Rapper G-Eazy and athletic brand Puma has officially announced their first sneaker collaboration in 2020. Their partnership extension was announced at Puma’s dinner to celebrate G-Eazy’s homecoming at Rolling Loud Bay Area last weekend. Details of the shoes’ design haven’t been revealed, but the brand has confirmed that it will be released early next year.