Here’s how to fashion faith into your wardrobe

Fashion has long derived inspiration from religious iconography, from replicating images of the Virgin Mary to drawing architectural prints from majestic Italian cathedrals.

We’ve seen this trend date as far back as Christian Lacroix’s impressive final haute couture look in 1989, where Marie Seznec Martinez sashayed down the runway in a dramatised wedding gown while sporting a large golden cross necklace. In 2006, Lacroix added a more contemporary twist to his wedding ensemble with vibrant colours and exaggerated silhouettes, without compromising the traditional integrity of the classic ecclesiastical dress.

New York brand Vaquera looked to the theocratic-based television series The Handmaid’s Tale as its overarching theme for its June 2017 collection. Based on Margaret Atwood’s 1985 novel, the four-man team designed dystopic looks in the same symbolic red robe and white coif but with a modern and edgy flair.

Theological-inspired fashion may have taken the fashion runway by storm but still remains controversial due to its sensitive nature. With designers like Dilara Findikoglu, who displayed a satanic-themed collection in London Fashion Week 2017, the boundaries for fashioning faith have been relentlessly pushed and challenged. The 27-year-old Turkish designer sent out models dressed to resemble devils and vampires, down a runway in St Andrew’s Holborn church. The collection drew the ire of members of the church and other devouts, who claimed that Findikoglu’s work was sacrilegious, blasphemous and an outrage to the holy setting.

If you’re looking for ways to blend fashion and faith, here are 11 pieces to purchase to add a divine touch to your ensemble. 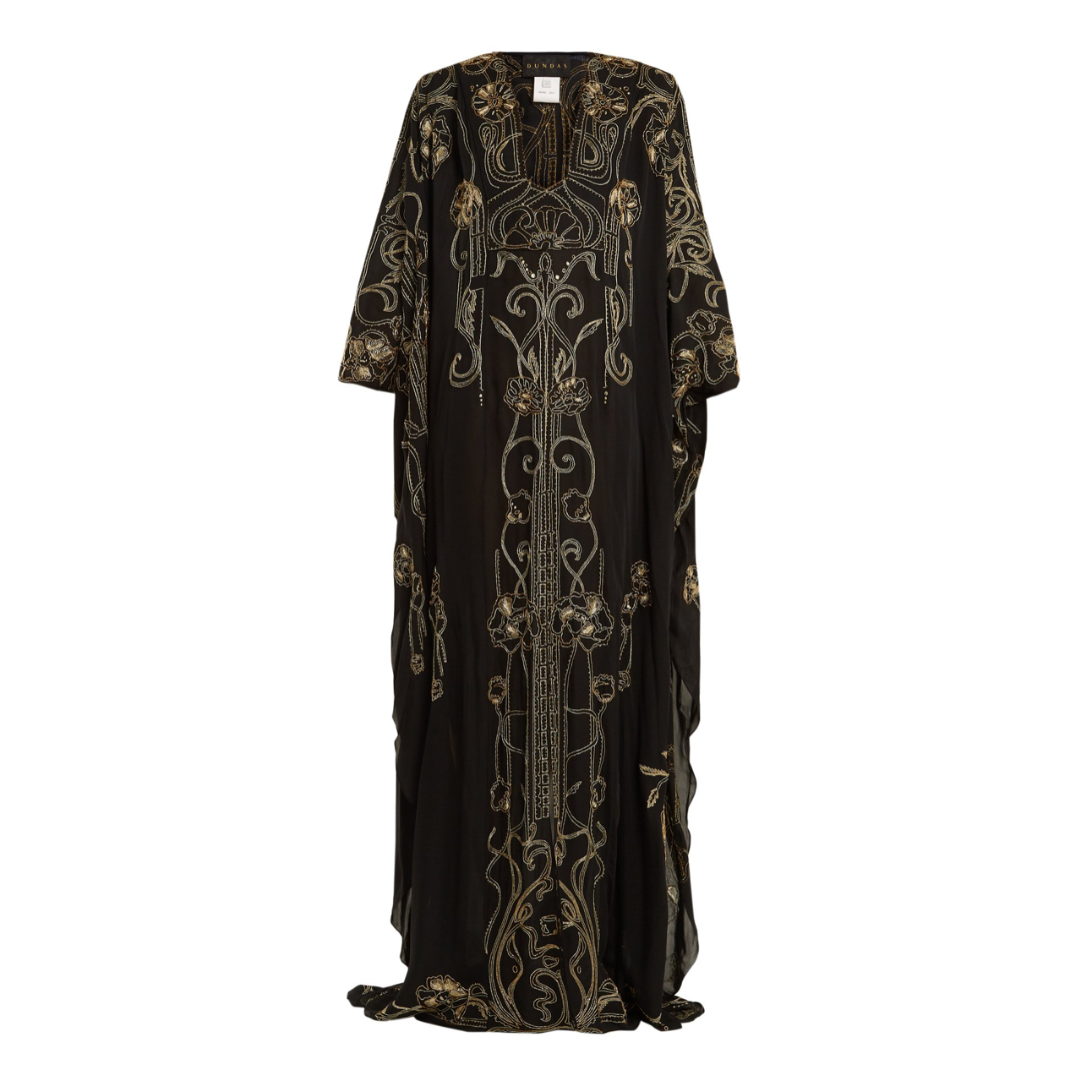 This flowy black and gold metallic gown features a deep V-neck cutting with several side slits. The overall kaftan silhouette harks back to many cultures, most noticeably that of the Turkish Ottoman empire. Turkish royalty donned kaftans with intricate hand-sewn embroidery to set themselves apart from other classes of society. The kaftan evolved during the 1960s’ hippie movement and was thereafter incorporated into high fashion brands like Giamba’s Fall 2018 collection and Badgley Mischka’s Resort 2018 runway. Although it’s worn as a fashion statement piece today, kaftans are still used as religious apparel by Muslims and Orthodox Christians in Russia. 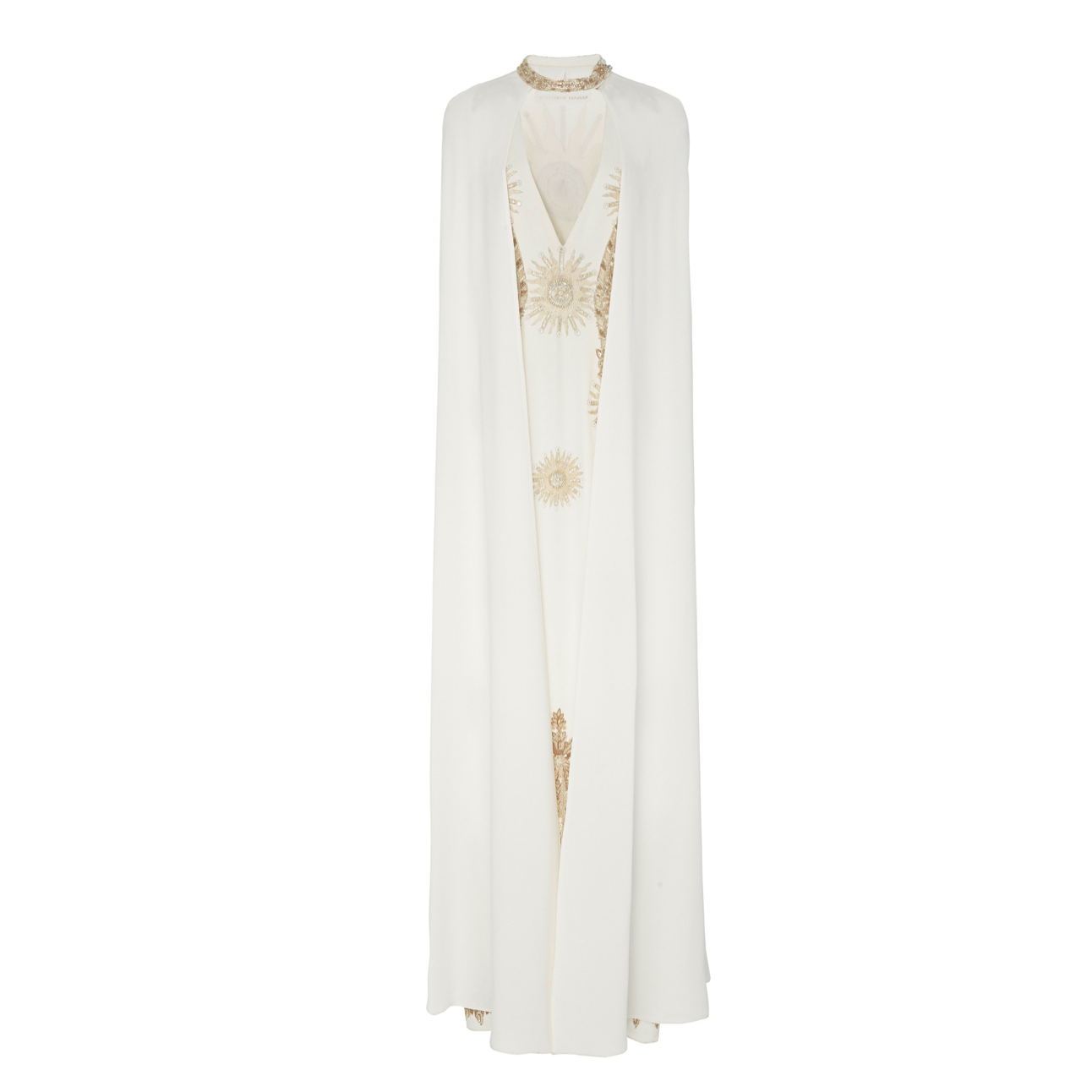 This white Cucculelli Shaheen dress is meticulously hand-embroidered with gold, platinum, copper beads and even ivory pearls. The most striking element of this evening gown is the sewn-in cape, which dates back to the medieval European era. A cape was most commonly seen then on members of the Catholic clergy and was worn for liturgical purposes. It was also donned by the American and French military before evolving into today’s fashion statement. Caped garments were also present in Christian Dior’s latest Spring 2018 couture collection as well as Alberta Ferretti’s Autumn/Winter Ready-to-Wear 2018 collection. 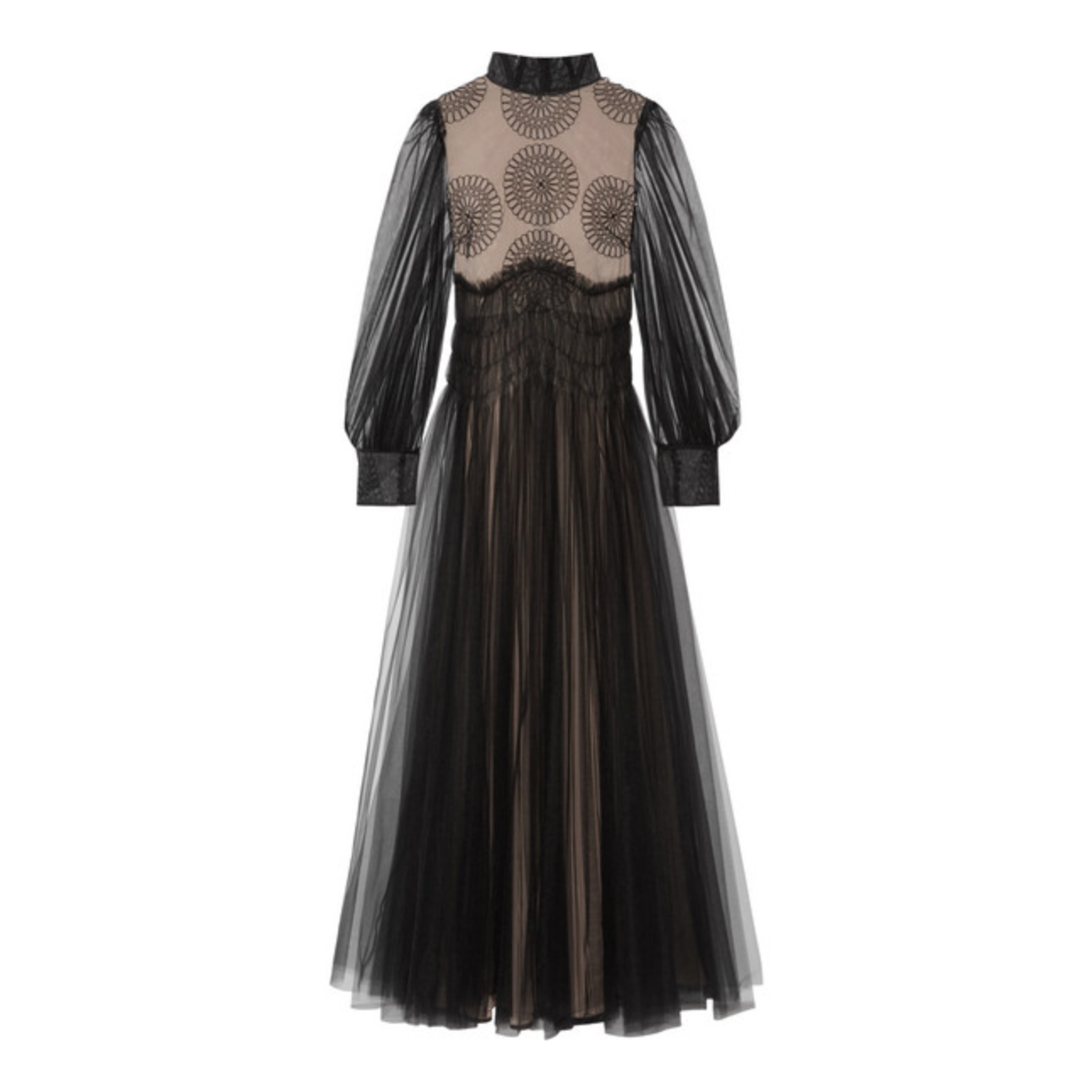 Valentino’s creative director Pierpaolo Piccioli drew inspiration from medieval and Renaissance times to design a fashionable and luxurious version of the tunic-scapular religious habit. The gown is made with mesh material that makes it too provocative for Sunday church service, but can be easily paired with any coloured inner-wear to tone its risqué factor down a notch. The religious habit is still routinely used by nuns and friars, but it has been referenced in past fashion shows such as Givenchy’s Ready-to-Wear Spring 2013 collection. 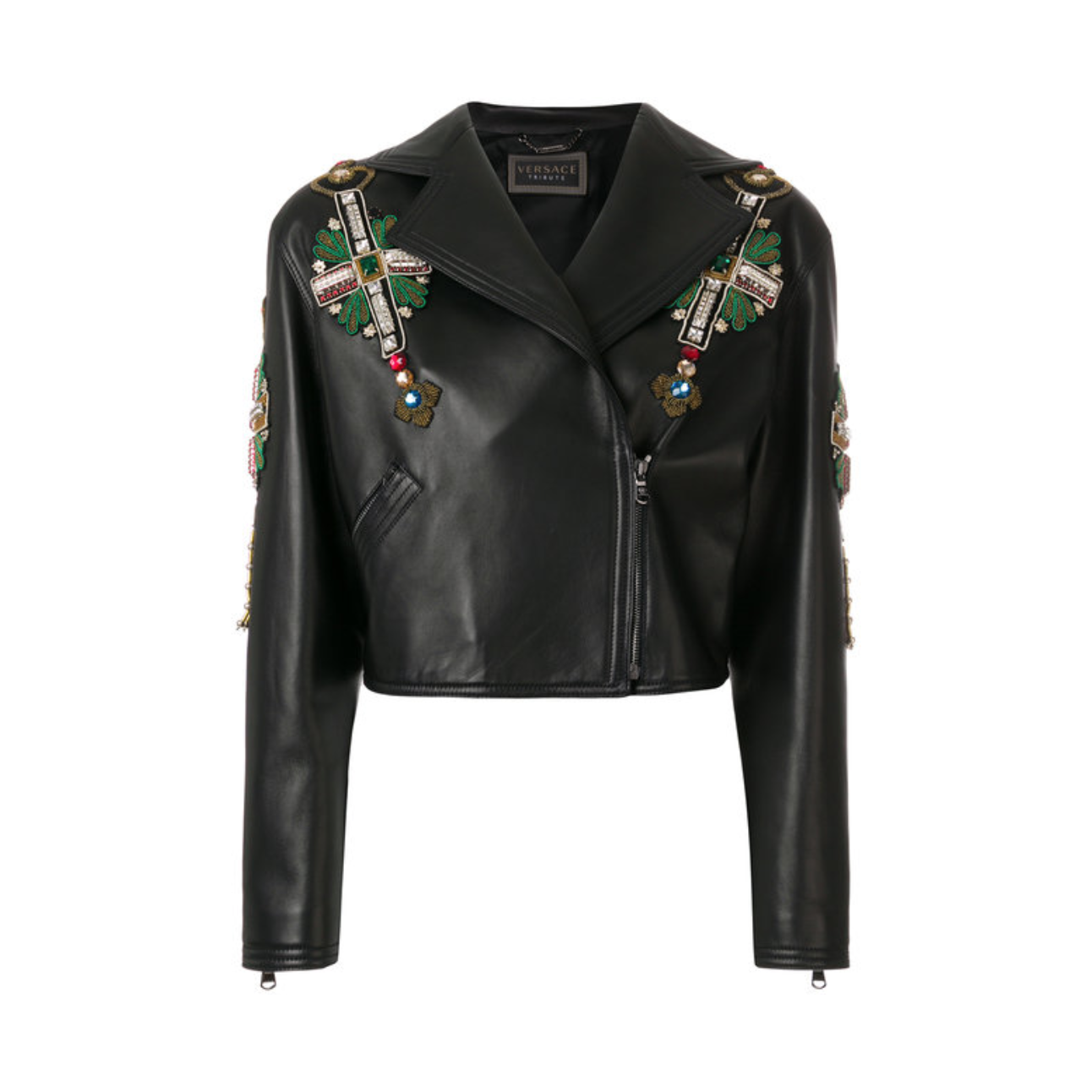 A classic leather biker jacket is dressed up with cross embellishments that come in a mix of green, white, red and yellow hues. A recurring symbol in Catholicism and Christianity, the cross has long been one of the more popular religious motifs making its way into the worlds of fashion and jewellery, with celebrities and rappers incorporating it into their attire — regardless of faith. 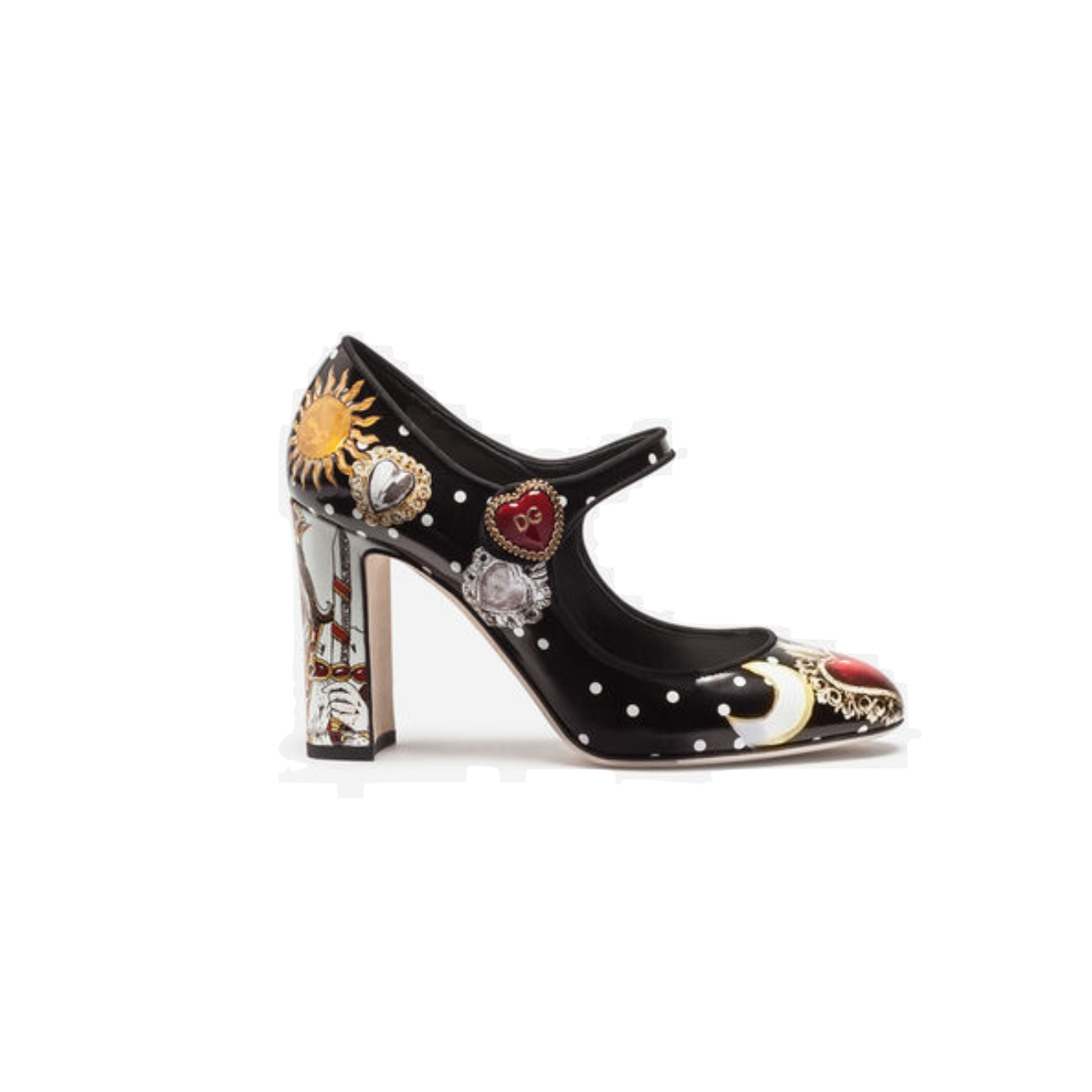 In Dolce & Gabbana’s Spring 2018 release is a Mary Jane shoe that flaunts symbols of the sacred heart, a crescent and the sun on black patent leather. The emblems are in line with the brand’s latest King of Hearts collection, which sees bold patterns on various clothes and accessories. They allude to religious iconography, and the role that faith plays in royalty. The sacred heart is also a key symbol in Roman Catholicism. Dolce & Gabbana has heavily referenced theology and Sicilian culture since 2010. 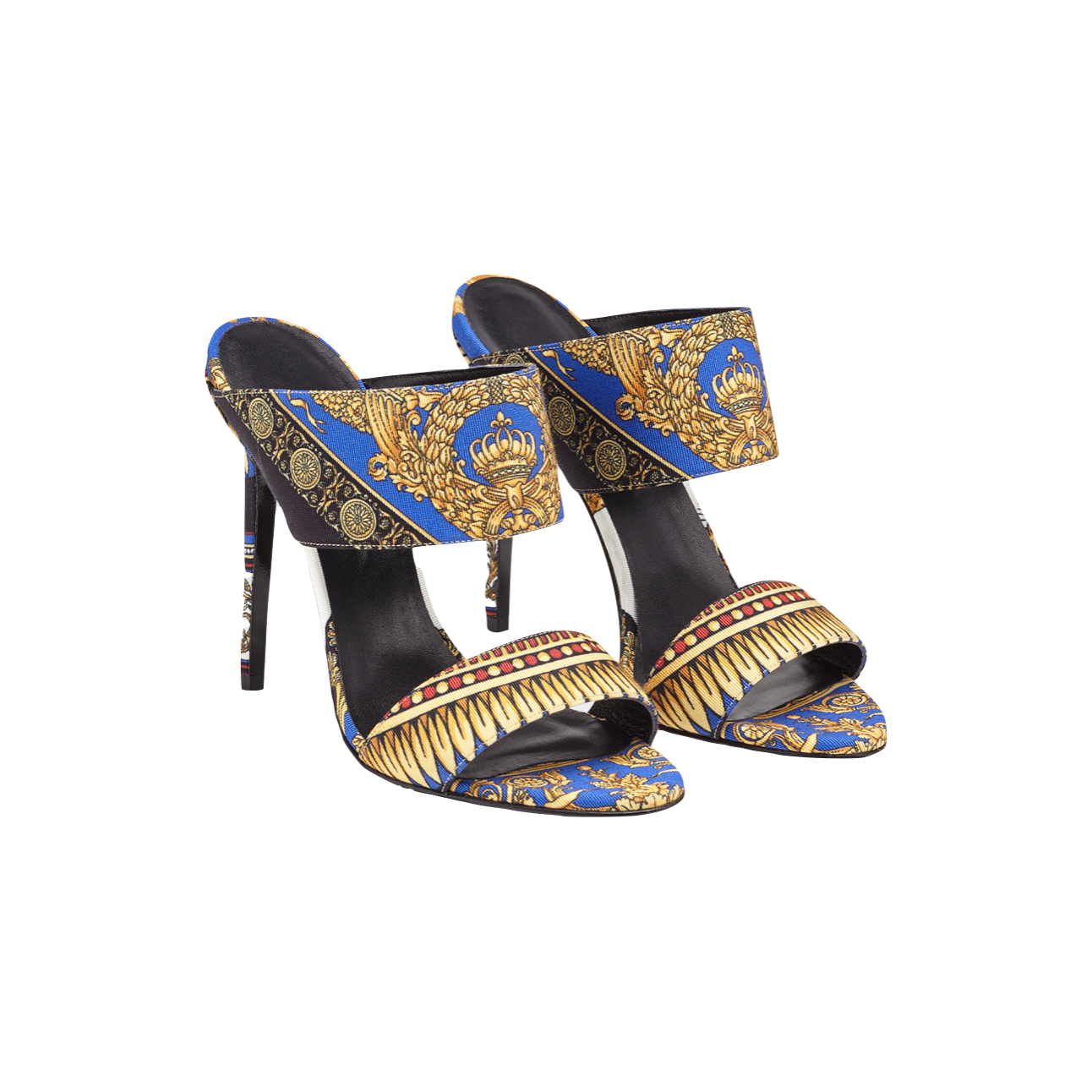 Versace incorporated gold baroque prints into its Ready-to-Wear Spring 2018 collection. Baroque prints originate from Renaissance art and was a popular decorative style used in Italian churches since the 17th century, thanks to their exuberance and regality that easily injected glamour into any aesthetic. Apart from Versace, brands like Moschino, Salvatore Ferragamo and many more have integrated bold baroque prints into their designs. Slip on this pair of sandals to elevate your look. This Judith Leiber clutch is embellished with silver Austrian crystals and pearls to create a lush pattern centred by a cross motif. The late Hungarian-born fashion designer claimed that Hitler was the reason she joined the handbag business. She was best known for her crystal minaudières and only has four boutiques in the world, one of them being in Singapore. Her handbags commonly feature one-of-a-kind animal prints, but several statement pieces like this showcase inspiration drawn from the cross. 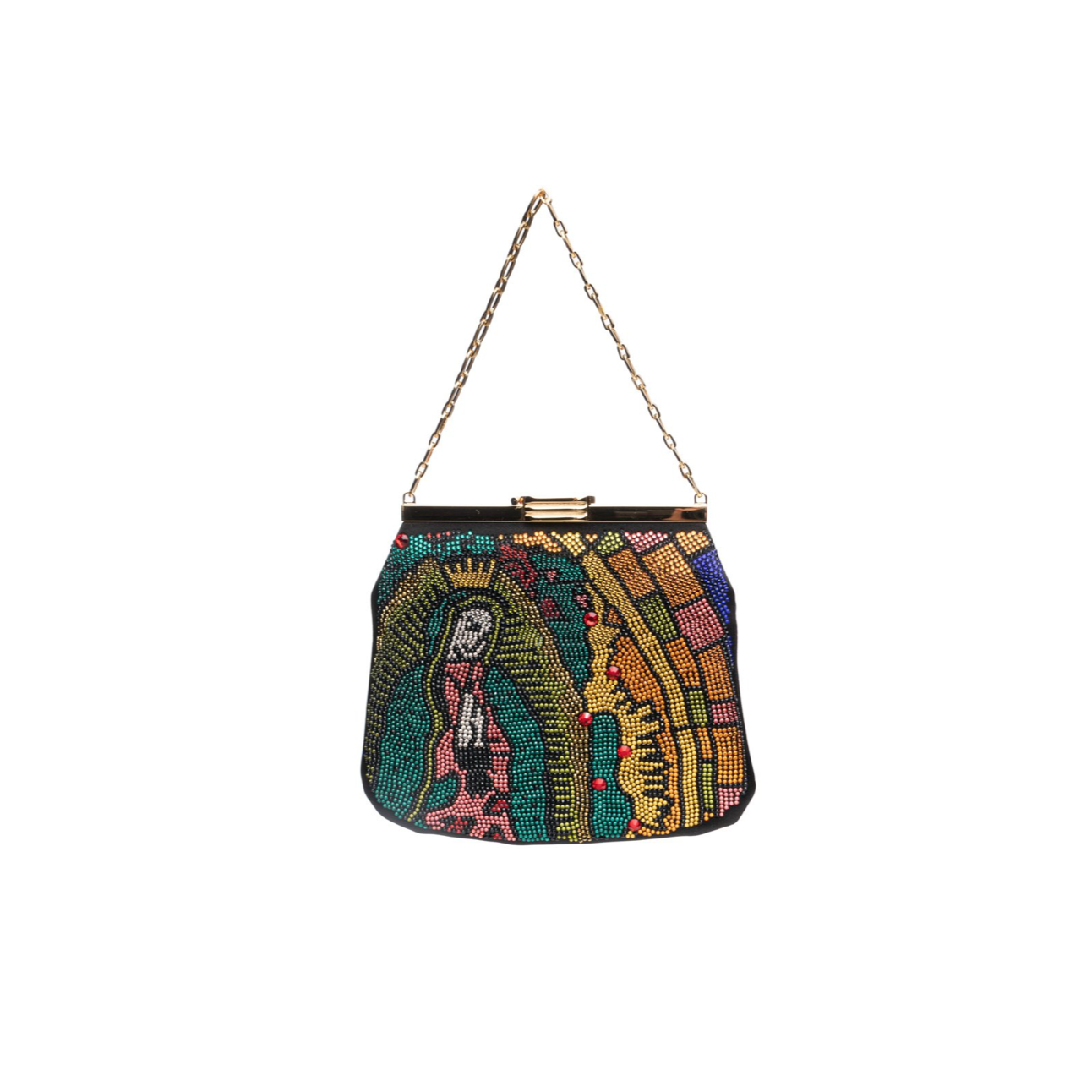 8
Bienen-Davis' Our Lady Of Guadalupe 4AM bag

While most designers take a more subtle approach in incorporating religious inspiration into their bags, Bienen-Davis’ Met Gala 2018 Sacs-rilège Capsule collection went the completely opposite direction. Using over 4,000 multi-coloured Swarovski crystals, the bag was carefully embellished to feature Our Lady of Guadalupe, also known as the Virgin Mary. Seeing how luxe and intricate the brand’s latest collection turned out, it’s no wonder that stars like Sarah Jessica Parker and Adwoa Aboah were wearing Bienen-Davis creations on their wrists on the red carpet. 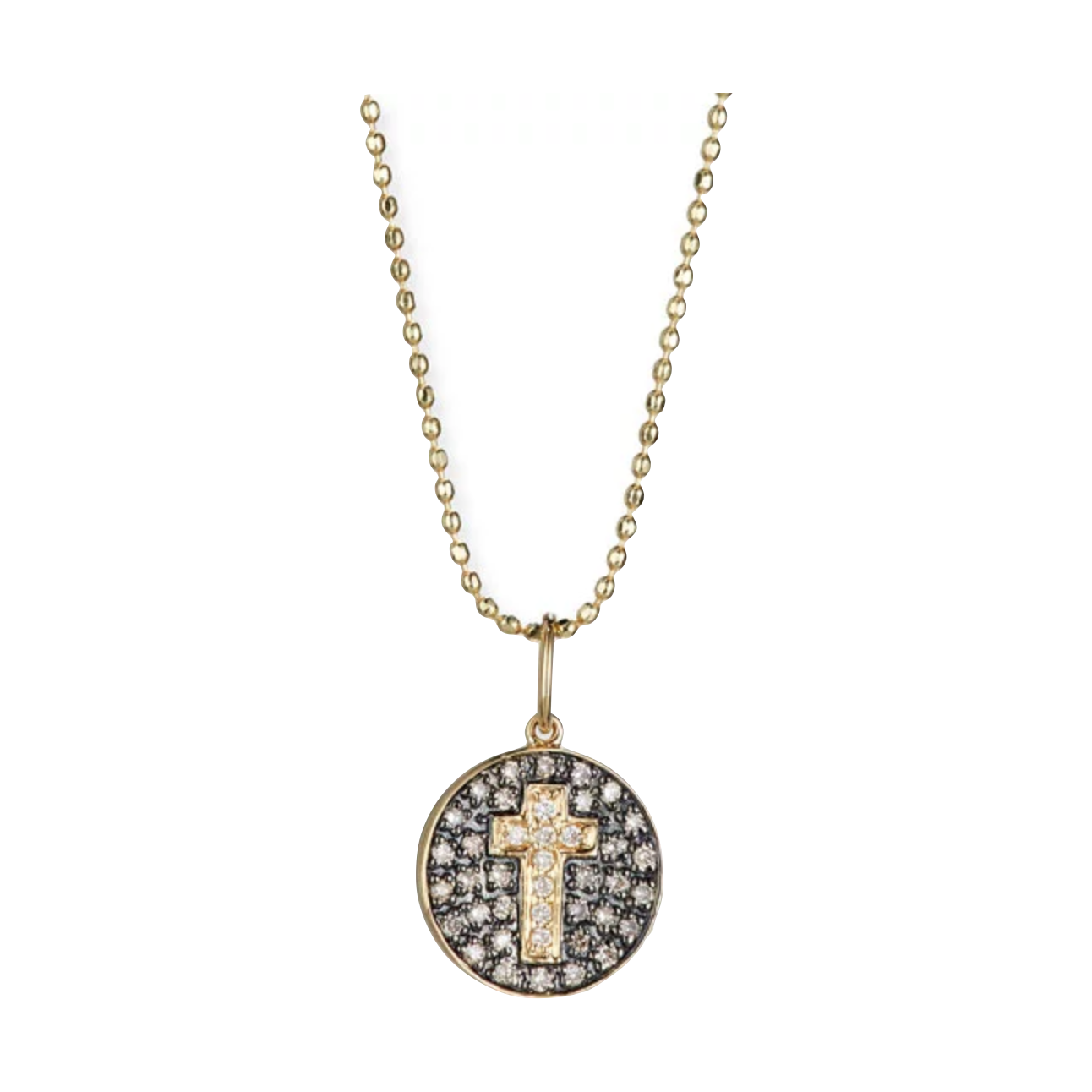 This Sydney Evan necklace carries a 14k yellow gold ball chain paved with champagne and white diamonds in the classic cross motif. The brand’s founder and designer Rosanne Karmes has a penchant for crafting quirky jewels that carry spiritual talismans like the hamsa, evil eye and crosses. Stars like Rihanna, Jennifer Lopez and even Miley Cyrus have been spotted wearing quaint Sydney Evan rings and necklaces. 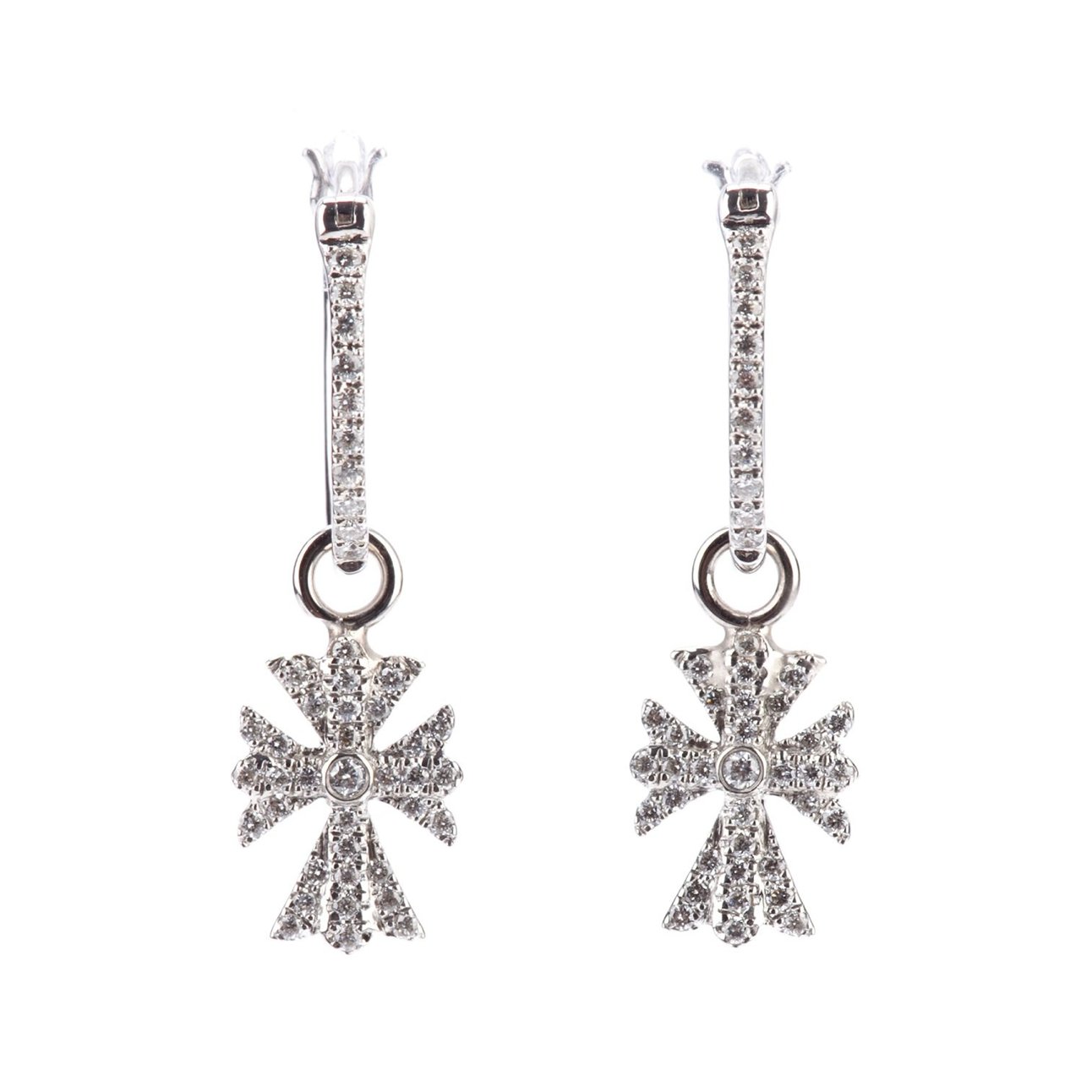 Instead of the usual cross pendant, try on these dangling earrings from Elise Dray, which are striking statement pieces that can be easily paired with any day or night look. Fashioned in 18k white gold, they are completely covered in pavé white diamonds and add a luxurious twist to any ensemble. 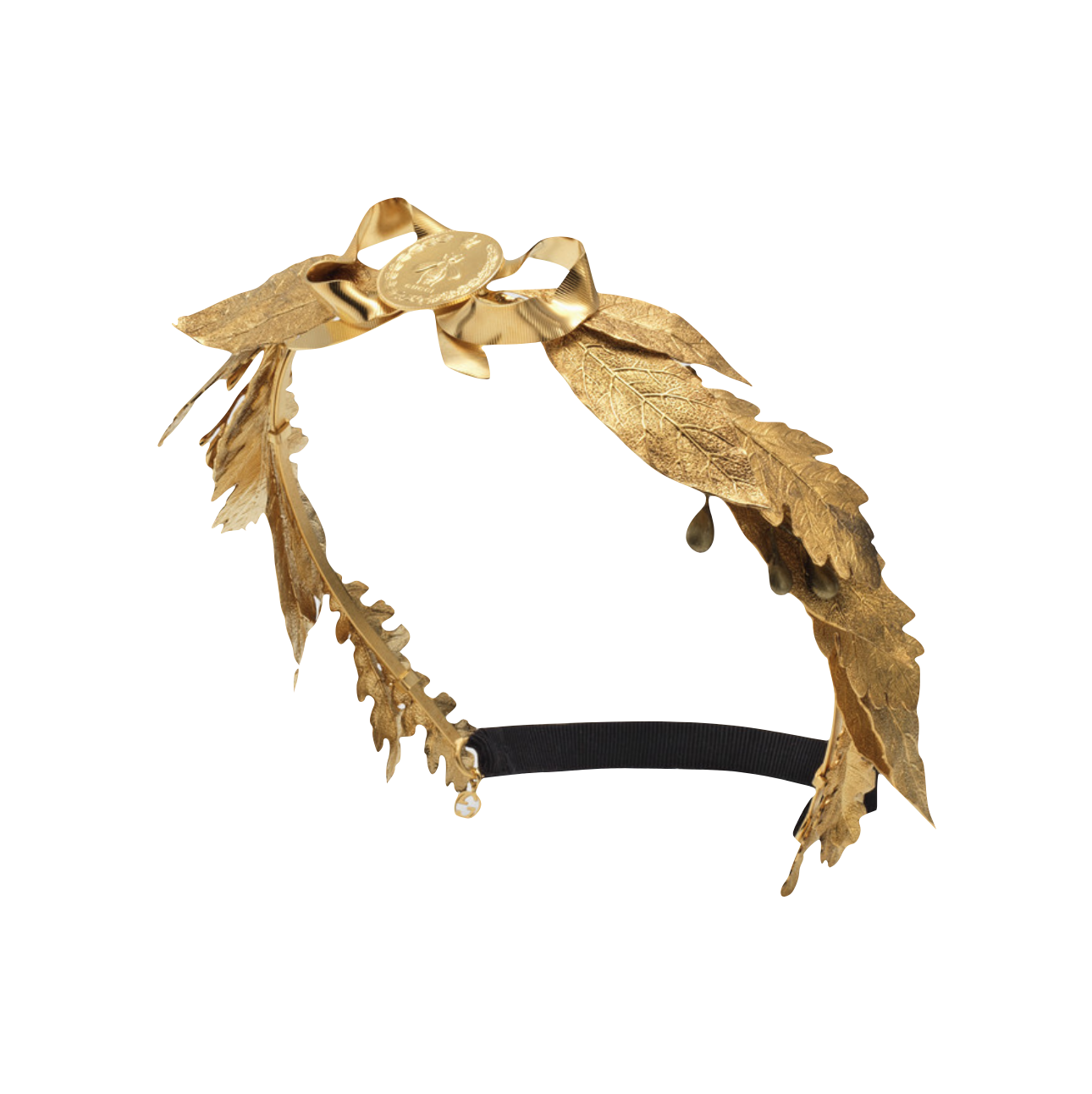 Released at Gucci’s Cruise 2018 show, this golden-leafed hairband references laurel wreaths — a prominent motif in Julius Caesar and Greek mythology. Originally made from branches and leaves, the laurel wreath symbolises victory and accolade, and was used by athletes during the ancient Olympics. These wreaths also allude to Jesus’ suffering, and are now used as traditional decorations hung on front doors during Christmas. This crown-hairband is made in metal with an aged gold finish, and also features intricate shapes of oak leaves, a metal bow, metal coin, and bee.