10 best fashion moments of the week: Gucci aliens, Donatella’s Versace on the Floor lip-sync, and more

Style
10 best fashion moments of the week: Gucci aliens, Donatella’s Versace on the Floor lip-sync, and more
Share this article
Next article

Gucci’s band of aliens is not going away anytime soon. They initially made their Instagram debut a few months ago, mumbling Martian lingo against a green screen backdrop. Yet, it wasn’t until the social media brawl with Pierre Louis-Auvray, a Central Saint Martins BA student, who claimed creative director Alessandro Michele stole Gucci’s otherworldly creatures from Louis-Auvray’s digital fashion illustrations, that they blew up. Michele might insist the similarities were coincidental, but accidental or not, the Gucci aliens are here to stay.

For the latest Fall/Winter 2017 campaign, Gucci reinstated fashion’s long-lost fantasy element as it put these intergalactic beings into shoes which other luxury mammoths would normally save for the predictable Hadids. The extraterrestrial beings take centre stage in glowing UFOs and far-flung planets that don’t resemble ours — a refreshing change we need from the ultra-polished images we’re accustomed to.

In another mammoth Italian luxury house, perfection is taking on a new meaning as well. Watch Donatella herself lead her glammed up Versace boys and girls get down to the season’s catchy tune (no, not Despacito) — Bruno Mars’ Versace on the Floor, in the grandest of mansions. It’s an impeccably well-dressed move in raising the karaoke bar to a whole new level. 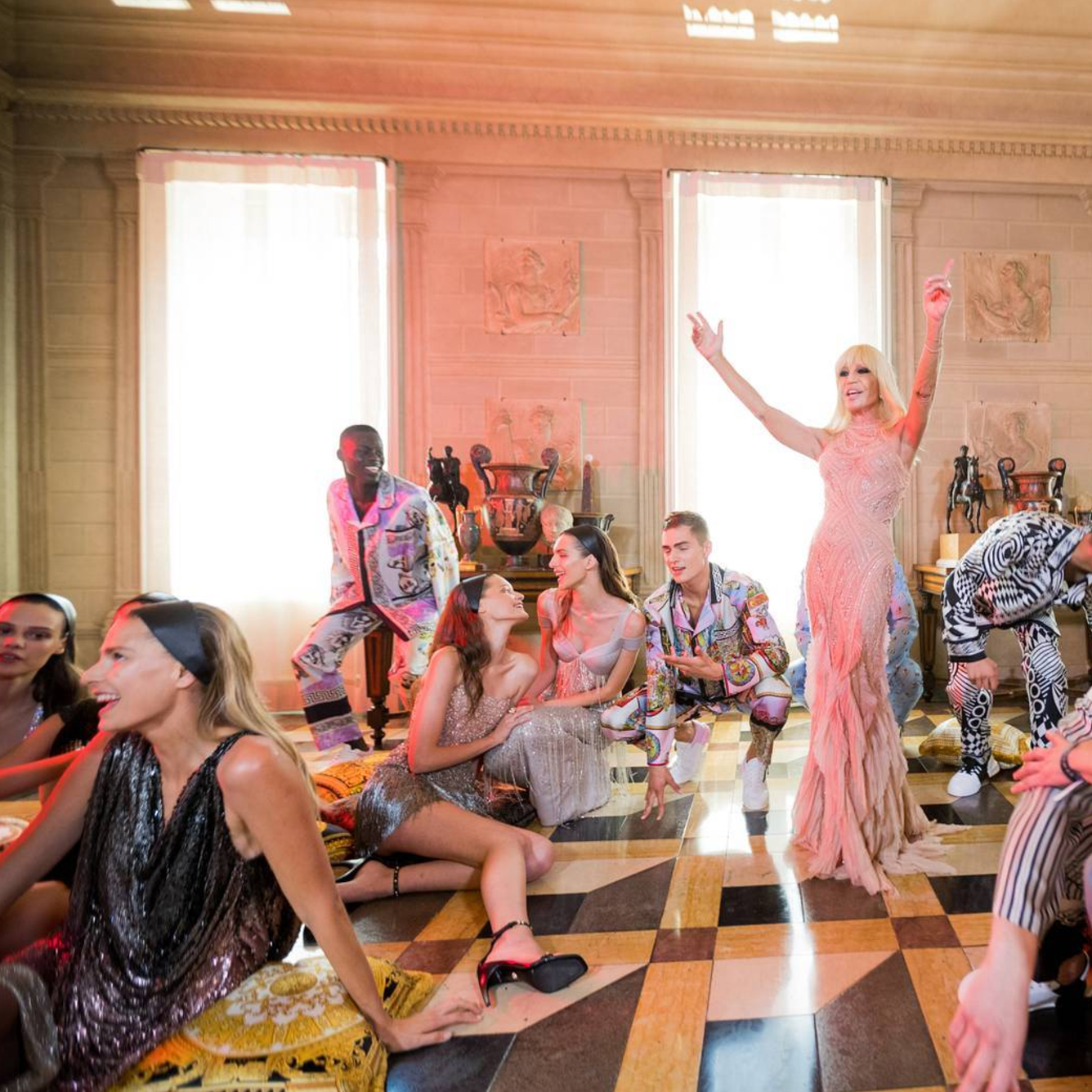 “What a fun experience! #VersaceOnTheFloor” 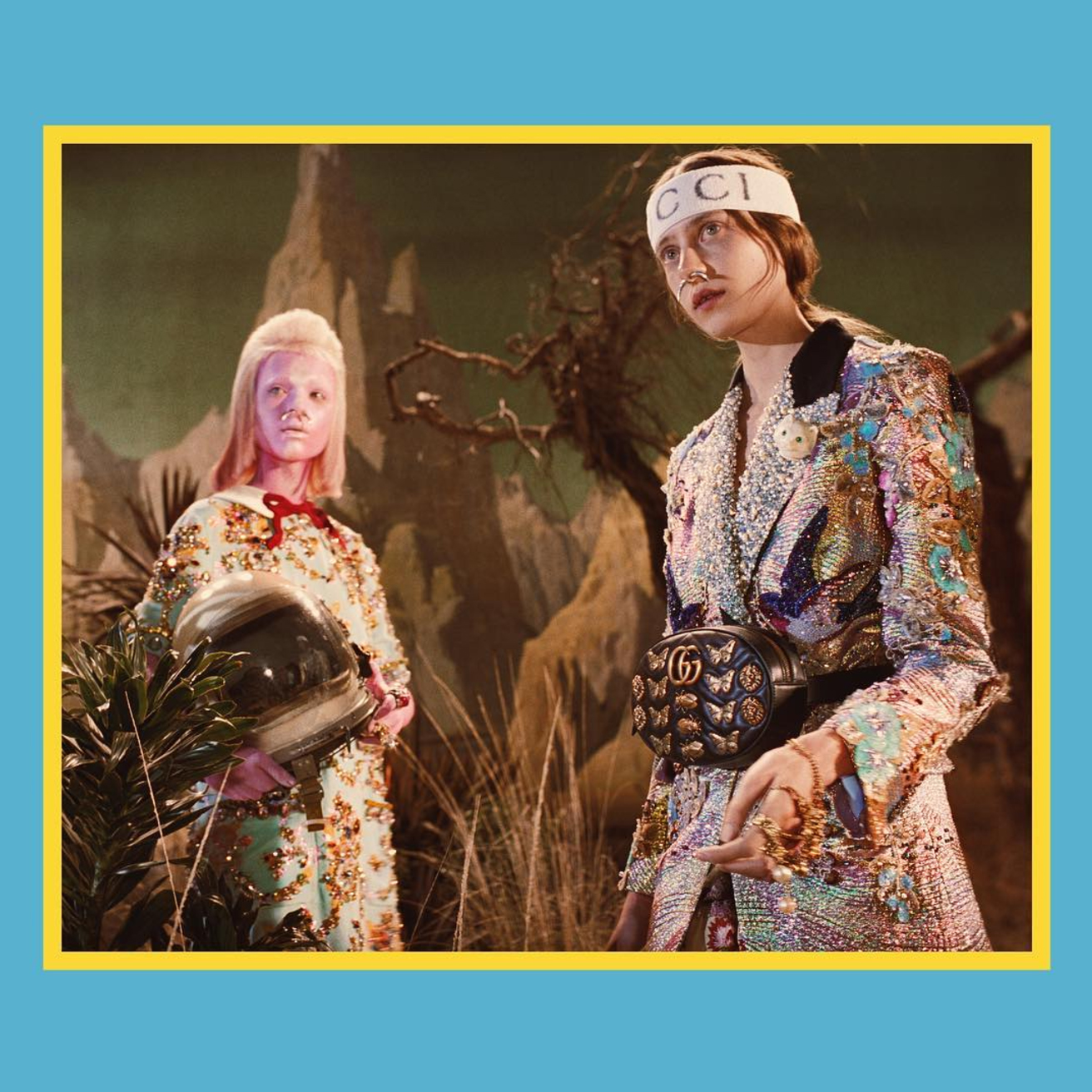 Gucci looks to the extraterrestrial and beyond for its FW17 campaign mood board.

“Vintage sci-fi inspirations are found in the #GucciFW17 campaign shot by @_glen_luchford. The #GGMarmont matelassé belt bag is worn over a lurex jacquard jacket, with a sponge headband with Gucci script. A floral bouquet tapestry jacquard dress with embroidery and a nose piercing with dog motif.#gucciandbeyond
Creative director: #AlessandroMichele
Art director: @christophersimmonds” 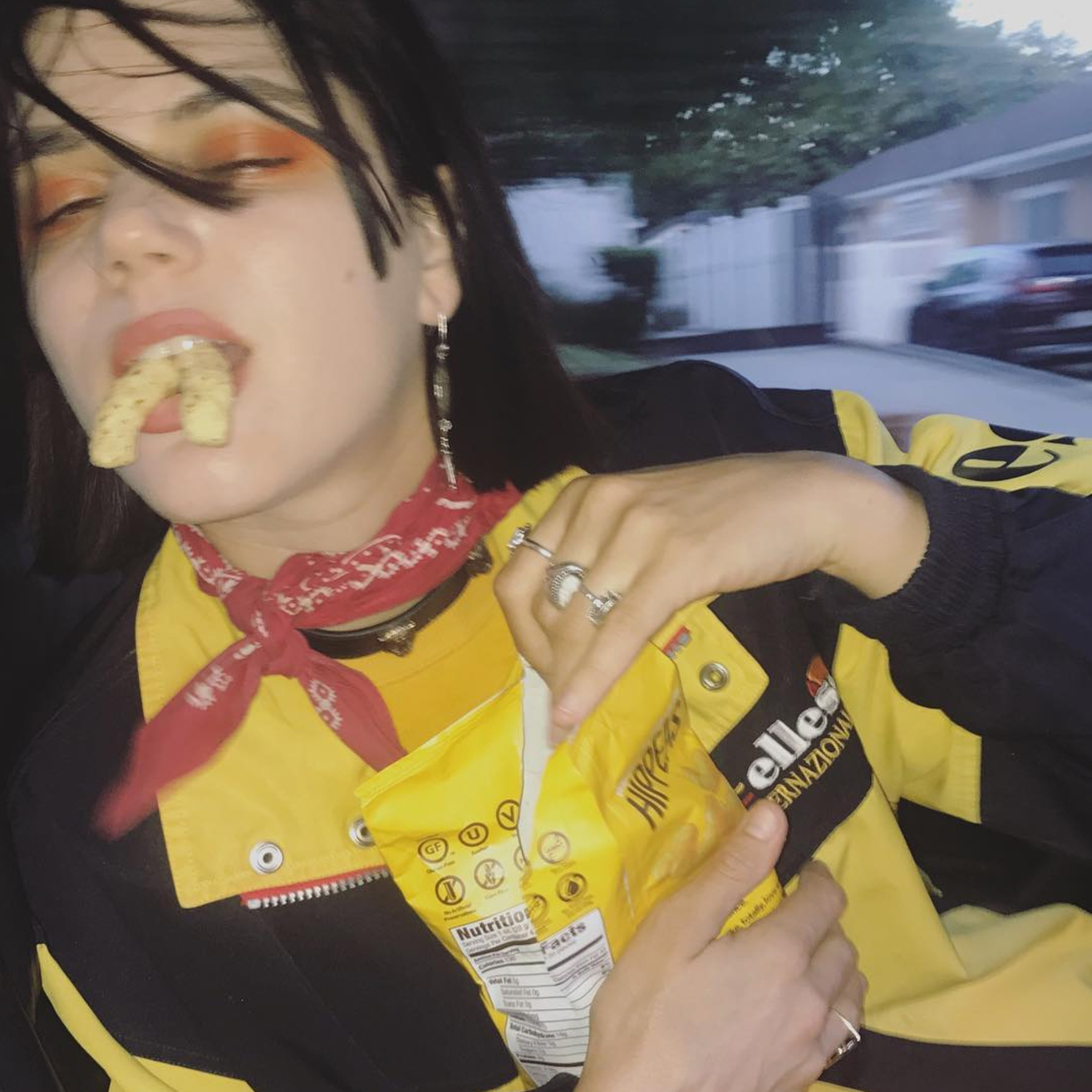 Ava Nirui, too, takes pleasure in dressing according her intake du jour. If Luka Sabbat — also known as 2017’s millennial style icon — ever starts his own cult mass, we’re signing up. We sure don’t mind a Haider Ackermann-clad pope. In München for the week, fashion buyer Tiffany Hsu dropped by MyTheresa’s brick-and-mortar boutique in the city for some chic plastic antics served by Miu Miu. 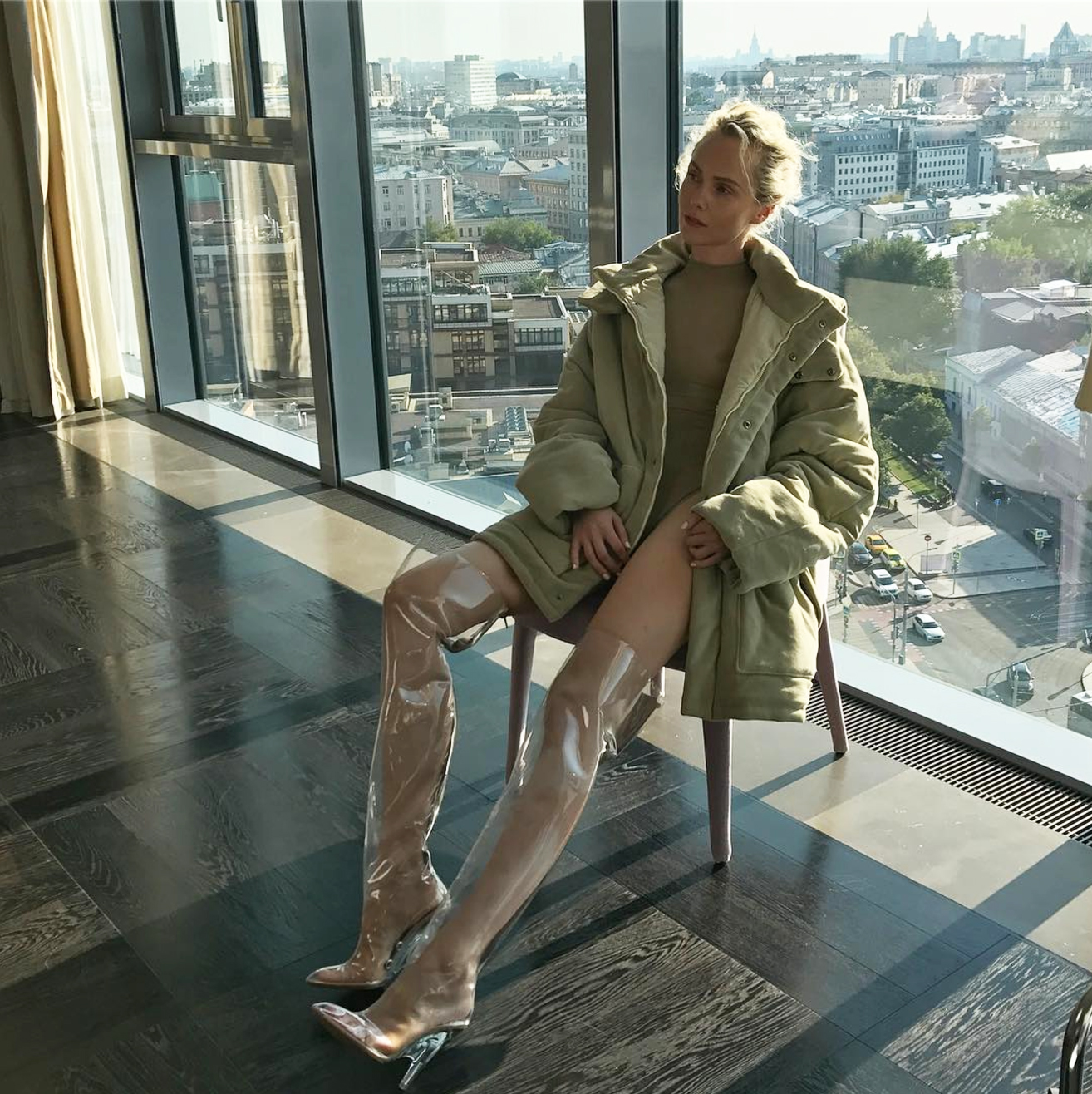 Elsewhere in plastic was Olga Karput — street style star and founder of Russian retailer Kuznetsky Most 20 — who wore her store’s latest Yeezy drop. Chanel’s Gabrielle bag isn’t just for the ladies, and G-Dragon is living proof that risk-seizing gents can look so androgynously good with one slung on. Now we know where Simon Porte Jacquemus — the Paris-based designer who heads his own namesake label — gets his keen sense of Provençal style; it runs in the family.

“MY GRANDMOTHER, SHE IS EVERYTHING TO ME.
#JACQUEMUS FAMILY” 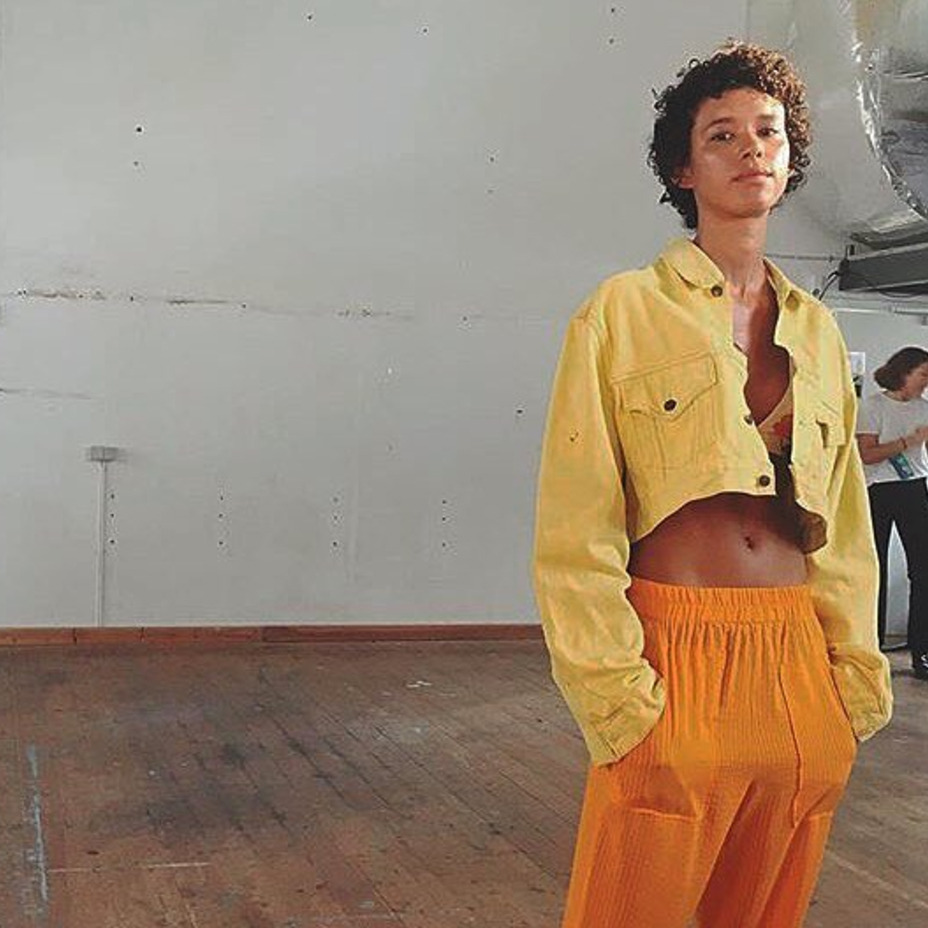 In Denmark for Copenhagen Fashion Week, cool cat Dilone opened the fashion fiesta’s most anticipated show, Ganni, before kicking it back at its garden party with fellow #GanniGirls.

Food & Drink
These artisanal ice-cream joints are delivering sweet relief to your home
Style
Want a new Coach bag? Shop for one without leaving your home
Style
6 best lume dial watches to light up your collection with
Beauty & Grooming
6 new beauty launches we love this June 2020
Food & Drink
Cricket ramen? This Tokyo joint is serious about the joy of eating insects
Food & Drink
7 best vegetarian restaurants that deliver plant-based meals to you
Living
Q&A: Extreme adventurer Ryan Pyle on rediscovering adventure in a pandemic
Travel
Singapore Airlines and SilkAir set to resume more flights in June and July
Food & Drink
What to order this week from Buona Terra, Wildfire Chicken & Burgers and SPRMRKT
Sign up for our newsletters to have the latest stories delivered straight to your inbox every week.