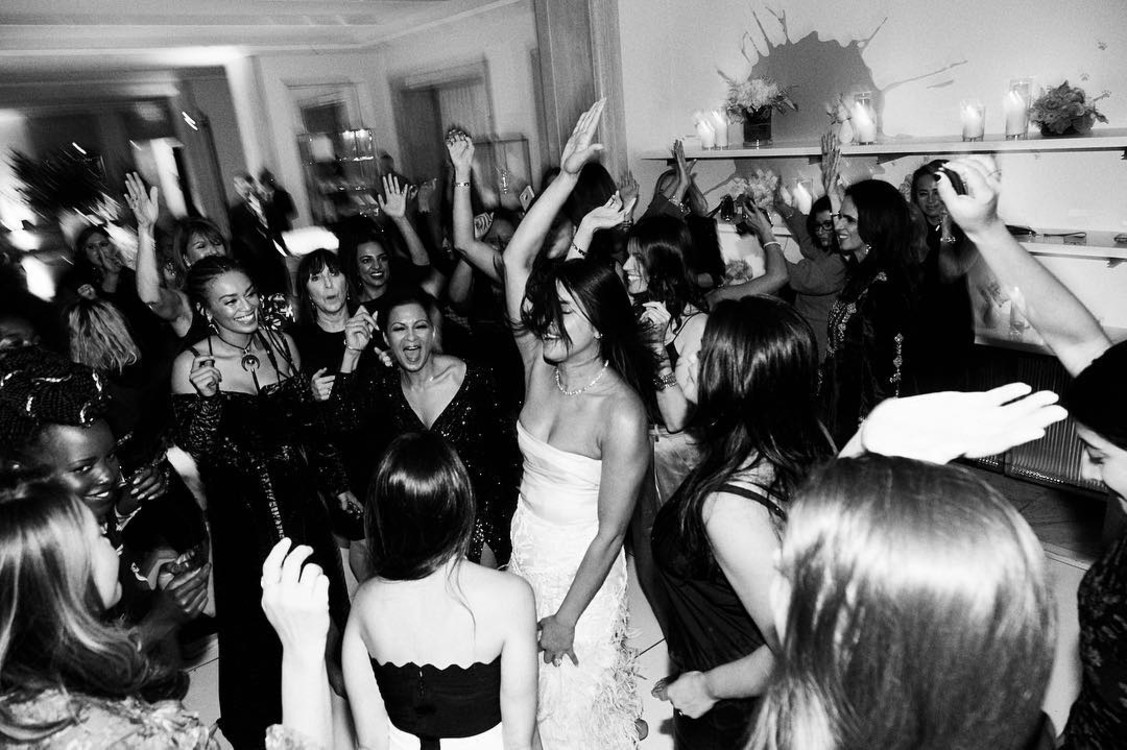 Wedding season is in full swing this month, and kicking it off is the holy matrimony of Japan’s Princess Ayako and her groom Kei Moriya. Choosing to marry a commoner (a recurring theme in these days it seems), she now forfeits her royal status and shows us that love is bigger than any archaic title. Keep reading for a recap on last week’s fashion news that includes more than the aforementioned fairytale story.

Love, laughter and a room full of amazing ladies…and some special gentlemen (what a special surprise)! Thank you so much @mubinarattonsey and @anjula_acharia for throwing me such a memorable bridal shower that broke all the rules! My amazing friends and family who made me feel so special and loved, thank you. And to top it off @tiffanyandco 😍 Perfect! Here’s sharing it with you…

A million hearts around the world broke when Priyanka Chopra and Nick Jonas got engaged. But we’re past that, and it’s onto the celebrations. The actress shut down the just-opened Blue Box Cafe at Tiffany’s flagship New York City store last Sunday for an elegant soiree with 100 of her closest friends and family, which include Lupita Nyong’o and Denise Miller-Jonas, her future mother-in-law.

The bride-to-be looked stunning in an ivory feathered column gown by Marchesa as she danced the evening away in a pair of Christian Louboutin heels. Now the wait is on to see who will be designing her wedding gown. We’re guessing she’ll go with someone who can blend the influences of both East and West together, as it is rumoured for the big event to take place at the Umaid Bhawan Palace.

Chanel partners with Pharrell for a capsule collection arriving next year

It’s been a year since the Colette x Adidas x Pharell x Chanel sneaker collaboration, and the latter two are ready for their next endeavour. At the Chanel Cruise 2019 show in Bangkok, the singer-model-actor posed for the cameras in a sneak peek of the capsule collection: a bright yellow hoodie embellished with sparkly Chanel logos and insignias.

The capsule collection will apparently be a full ready-to-wear series with both mens-and-womenswear, and it’s set to drop next year on 29 March, where it’ll be available at a new Chanel boutique in Seoul first. Select Chanel stores worldwide will then see the collection hit their stores on 4 April.

Took me a minute to get it together, but at long last, for those who have requested, a little look inside the best day of our lives. Link in bio for more. #thefaltrows

The Oscar-winning-actress-and-entrepreneur Gwyneth Paltrow married TV-producer Brad Falchuk back in September, but we are only getting a glimpse into the celebration of the #faltrows (that’s their hashtag) now. As seen in the photo album, it was a truly Pinterest-perfect wedding: an open-air rehearsal dinner in a Hampton’s garden, hand-written name place cards, and a dirty martini bar cart courtesy of Restoration Hardware.

On the big day, the bride wore a Valentino gown by Pierpaolo Piccioli with a layered lace applique over a swiss dot base, and the groom looked dashing in a classic grey Tom Ford suit.

Captured together at the party for the new Gucci Guilty fragrance campaign #ForeverGuilty, the faces of the campaign @lanadelrey and @jaredleto together with creative director #AlessandroMichele. The event was held in the Hollywood Forever Cemetery in Los Angeles. The landmark is also a setting in scenes from the video of the new campaign, which will launch worldwide in January 2019. #GucciBeauty. See @courtneylove’s Stories shot at the party on @guccibeauty

The ultimate showing of Lana del Rey, Jared Leto, and Alessandro Michele at the Met Gala this year was not the last time we saw fashion’s Holy Trinity. In the mausoleum of the Hollywood Forever Cemetery last weekend, we saw the eclectic trio reunite to break the news that the former two will star in the latest campaign for the brand’s formative fragrance, Gucci Guilty.

Titled “Forever Guilty”, it will be directed by Glen Luchford, the same creative eye behind a few of Gucci’s most iconic campaigns, including the most recent Noah’s Ark one. It is set to launch worldwide in January next year.

Thank you @VictoriasSecret for sending us actual runway looks and real wings to borrow for the night!!! OMG a dream come true! Got to be a Victoria Secret Angel for the night! And Kendall got good practice lol

The yearly Victoria’s Secret Fashion Show is nigh, and with it — just in time for Halloween — one very-successful influencer decided to capitalise on all the stars aligning. Kim Kardashian planned months ago for her and her sisters to “dress up” as Victoria’s Secret Angels (her sister Kendall is an actual Angel).

Of course, the lingerie powerhouse had no problem with the idea, even sending the family a few outfits from last year’s show for them to strut around in. The series of Instagram posts following could make for a great “Break the Internet” contender, ever since Paper Magazine’s 2014 cover of Kim Kardashian (yes, that one).

This year’s Victoria’s Secret Fashion Show will be filmed in New York City on 8 November and will be broadcast on 2 December.