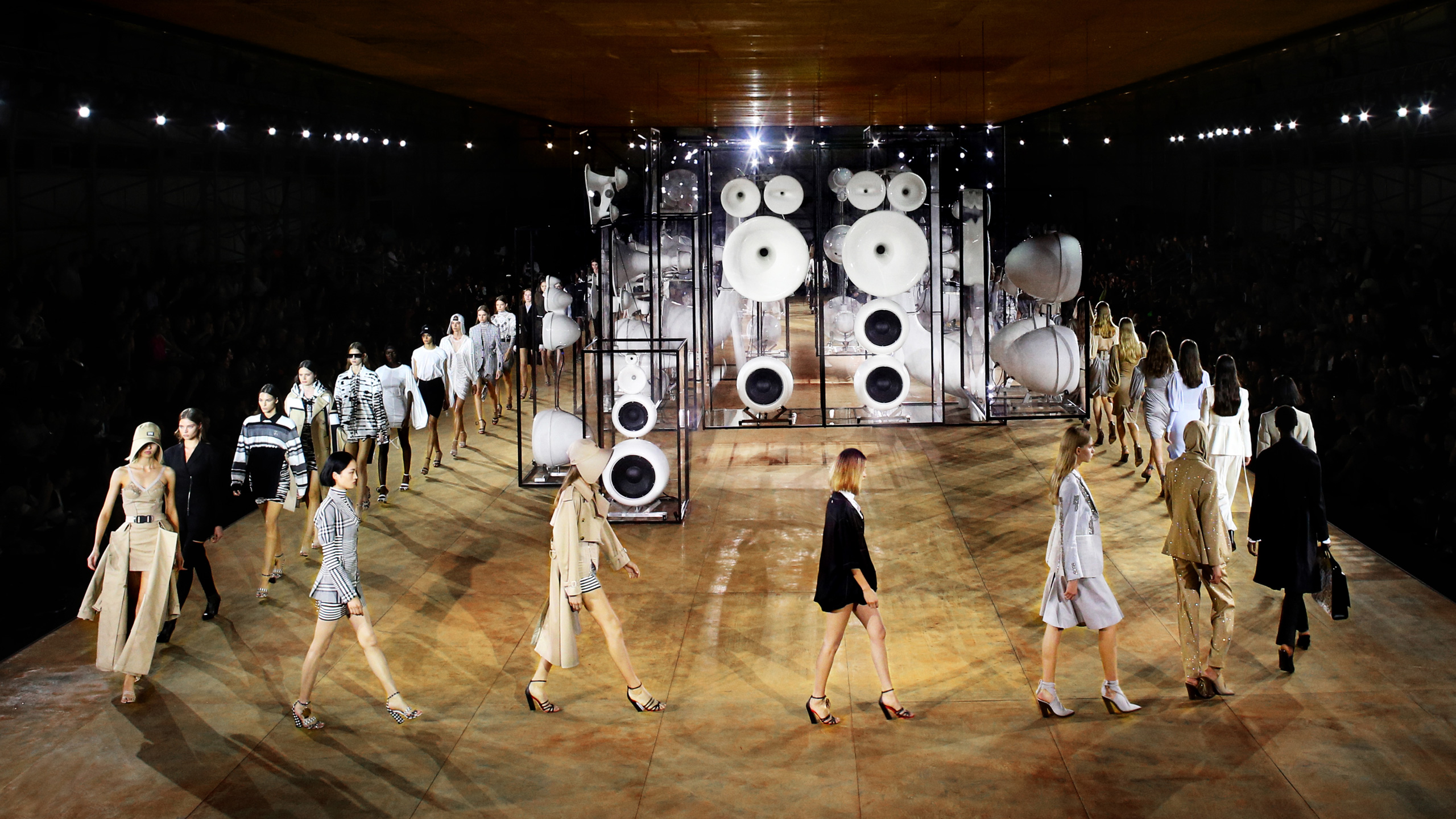 In the midst of Brexit woes, the designers showing at London Fashion Week were still determined to put on a strong front. Other than Vivienne Westwood (who chose not to put on a runway show), the typical stalwarts gave a masterclass in British dressing. While still playing on your usual tropes of florals and checks, the patterns and fabrics saw themselves on extravagant silhouettes and suits with unorthodox tailoring.

Interspersed throughout the few short days that saw models and editors flock to London were also forward-looking themes, suggesting in part the effort designers are putting in to participate in the planet-saving discourse. There was also the other more violent reaction from Extinction Rebellion.

The group of environmental activist first glued themselves to the doors of LFW’s official venue and spilled fake blood on the pavement to signify a “bleeding red carpet”. It all culminated in a dramatic staged funeral procession in Trafalgar Square at the end of the week. Two black coffins – one marked “OUR FUTURE” and the other “RIP LFW 1983-2019” – were central to the demonstrations that saw the involvement of some 200 people. Yes, some were dressed in black and even had veils on. These actions are definitely one-upping PETA, but are they necessary to drive the discussion about climate change?

There is no doubt fashion is becoming all the more sustainable season after season, with designers and fashion groups opting to be more transparent with how they treat their production and unsold merchandise. But we’ll save that conversation for another day. For now, here are the trends you can expect to see in your favourite boutiques come he Spring/Summer 2020.

What is a style more reserved for fall/winter made a strong showing this season, especially on the Burberry runway where Riccardo Tisci sent down a couple of models dressed in smart ensembles that resemble a CRT TV’s test pattern. Victoria Beckham also chose to utilise the versatility of checks, although it was played a bit safer.

Yes, Miranda Priestly’s iconic quote comes to mind whenever florals are mentioned in a trend recap. But Richard Quinn executed this style so exquisitely that you’ll want to burn your peplum dress once you’ve seen how he does it. After all, florals are his specialty. His clothes are just loud enough for you to stand out in the room, but not too ostentatious that it’s obnoxious.

A way to give clothes some dimension is through the use of layers, and putting a jacket on top of a blouse isn’t the only way. The lack of any ankle-showing throughout Erdem’s summer garden presentation was in part due to all the voluminous gowns that in one fell swoop eliminated the waistline. The bright, summer colours suggest the perfect attire for a garden wedding in the Mediterranean.

Elsewhere, the JW Anderson runway also saw a curious mixture of layered dresses and skirts that seem to flit in the wind with each step. It’s as though we’ve been transported back to an era of decadent European fashion but updated with modern sensibilities.

The impact of Anthony Vaccarello’s giant shoulders for Saint Laurent Fall 2019 have trickled down to this season, as seen in a more dramatic fashion with Richard Quinn’s oversized shoulder pads. Whether you want a subtle increase to your shoulder muscles or just have them blown out of proportion, the designer has something for you.

Erdem’s whimsical dresses too, have been accented with shoulders that would lend anyone who wears them a heightened stature. Few things are as powerful as a woman walking into a room with a floral dress and wide shoulders to command the space.

Style
Women in suits: Why power dressing is still a vital conversation in 2018

The future is now

Some designers find inspiration in the now, but the visionary ones are always looking towards the future. Despite leaving Kering, Christopher Kane has promised to still uphold the corporation’s comprehensive sustainability standards with plans to further improve on them. To really drive home the point that he’s all for creating a better planet, just peep the many pullover-hybrids emblazoned with the theme of the show, “Eco Sex.” Plus, the number of ensembles towards the end of the show featuring galactic elements only reinforce his outlook of the future. Perhaps they’ll be vintage pieces by the time we’re living on Mars?

Power dressing for women is no longer a novelty – it’s the norm. But the traditional silhouette for blazers and jackets can seem a little too stagnant, and we’re glad designers are trying their hand at some unorthodox tailoring styles to jazz it up.

Riccardo Tisci has brought back to the forefront the jacket with a cinched-to-oblivion waist, replacing buttons with a zipper and adding unique elbow joints to the sleeves. We’re also loving the addition of a belt to the waist of the men’s suit, probably a nod to the detachable scarves from his counterpart Kim Jones’ suits for Dior?

Richard Malone also showed a variety of new silhouettes that evoke a bold, “Wild Wild West” mood with the fringes on the jacket and the boot-like shoes.