Following pitstops in London and Pitti Uomo‘s Florence, the menswear circuit has just rounded up Milan Men’s Fashion Week (MMFW). Unfolding over the course of three days, the weekend journeyed through a whirlwind of shows where Italy’s best served their next season’s sartorial offerings on a silver platter.

Yet with recent developments in the fashion calendar — Gucci, Burberry and Vetements (before it decided to drop off completely, that is) notably sparked a shift in other labels to organise co-ed runway shows — Milan’s menswear scene wasn’t as dynamically definitive as it once was.

Business of Fashion’s Angelo Flaccavento even decidedly pointed out that Milan was in the peril of losing relevancy, as it was lacking originality.  “To put it clearly: Milanese designers are looking at Balenciaga, Raf Simons and Gosha Rubchinskiy a little bit too much. The spiral of copies is so swirling, you almost get a sense of vertigo,” the fashion critic wrote.

There’s always a silver lining, though. Amid the cluster of Italian big names losing their niche in pursuit of sports luxe’s commercial viability, those who dared to colour beyond the lines of the currents stood out. From Fendi’s eclectic workwear panache to Prada’s graphic superheroes, here are the freshest MMFW Spring 2018 shows you need to see. 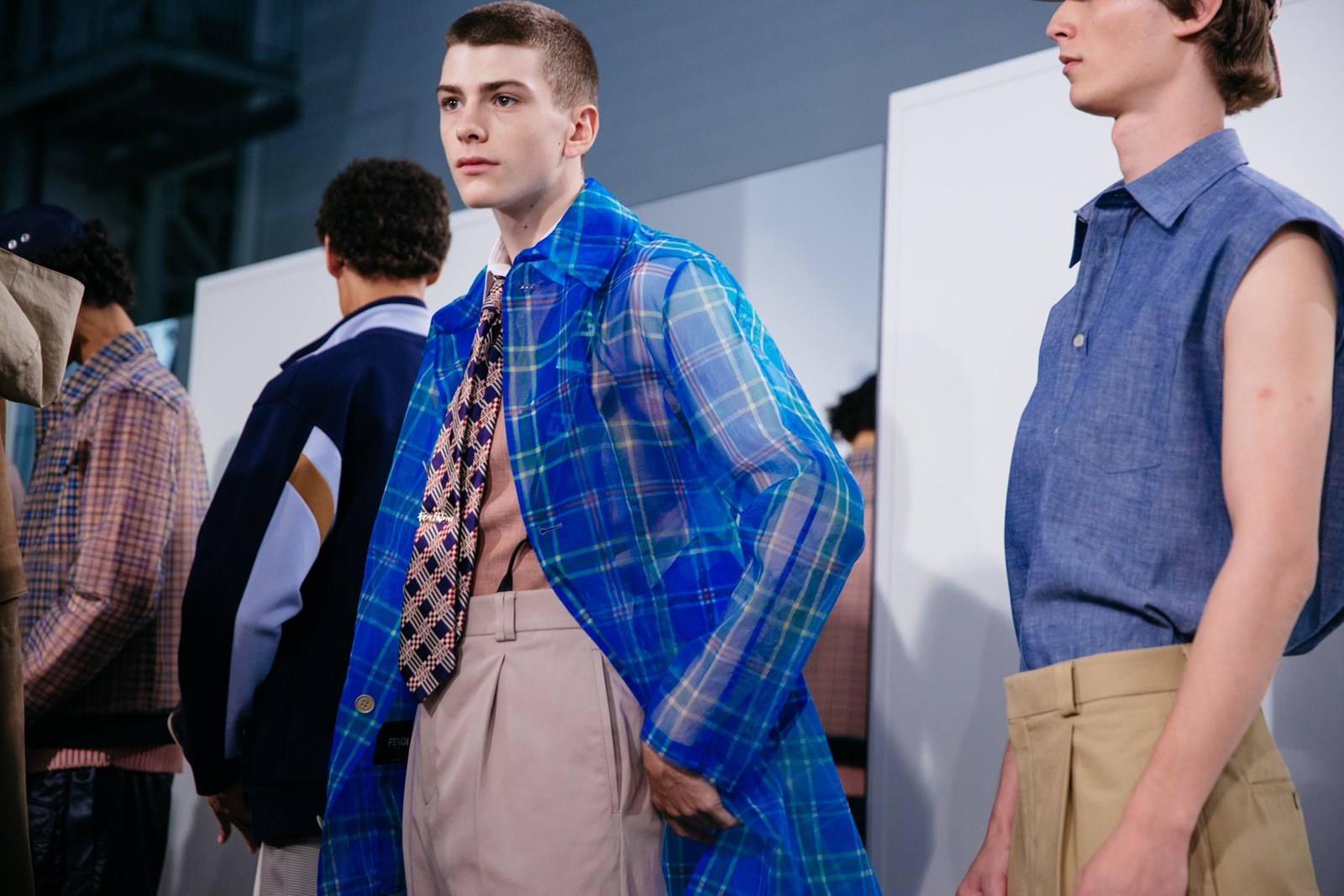 Business casual. It was the running theme Fendi menswear creative director Silvia Fenturini Fendi had in mind for Spring 2018. Transforming the Fendi HQ into a marble-floored office foyer, corporate models marched in and out of elevators clad in workwear reshaped in relaxed silhouettes. Weighty suiting materials were ditched in favour of diaphanous filmy fabrics, and youthquake edge was injected through nuanced logomania submerged in check patterns made of blink-and-you’ll-miss-it Fendi logos.

Silvia’s inspiration? Burgeoning start-up CEOs. “You have young kids who are the head of start-ups and then become multi-billion companies in a few years, and so the attitude is changing and I think our lives are changing,” the creative director explained. Set in Milan’s Università Statale, an architectural gem of Renaissance past, its courtyard was transfigured into a futuristic garden filled with poetic tangerine pebbles inspired by the natural shade of vicuña, the exquisitely fine wool Zegna is famed for. And Alessandro Sartori’s sophomore collection was just as luxuriously grand.

If there’s anyone who’s doing sports luxe tailoring justice, it’s Sartori’s Zegna. He splendidly did so without discrediting the Italian house’s code of excellent craft and heritage. The collection employed a full spectrum of colours ranging from breaking dawn’s pinkish tinge to crisp morning’s sky blue and sunset’s warm earthy tones. Inspect closely, and you’ll know it’s as intricate as men’s couture can be, yet so profoundly light that the washed silk blazers merely weighed 200 grams. Sheer magic. 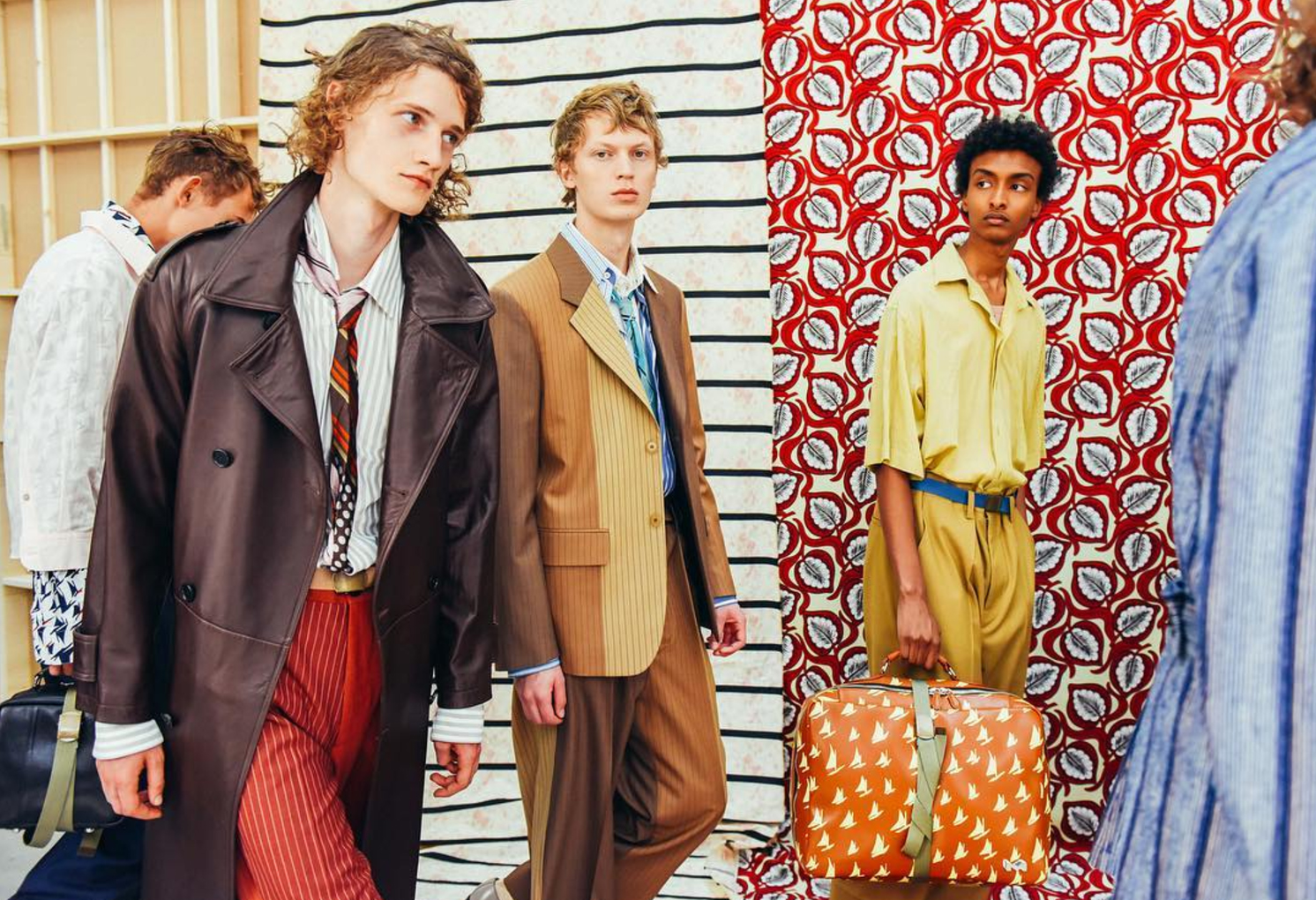 Marni’s Spring 2018 exhibit was another sophomore entry executed by a stalwart who knows his craft, and the brand’s DNA, exceedingly well. The Prada-trained Francesco Risso stepped in to take up the creative reins when Consuelo Castiglioni, Marni’s quirk-veined founder, left her post. Although Risso’s womenswear debut at the beginning of the year wasn’t the most convincing, this one was.

Amusingly madcap yet still commercially viable, the curious excursion had a Benjamin Button timeline of sorts. Opening with office-apropos maturity and golfing dad knit vests, each look subtracted years from its previous one, thus ending with angsty DIY illustrations and toddler-recalling naval stripes. The common thread weaving Risso’s narrative together would have to be the charm of dressing absent-mindedly: Askew ties slipped into pants, a shirt layered underneath a shrunken one and wide collars left half tucked. 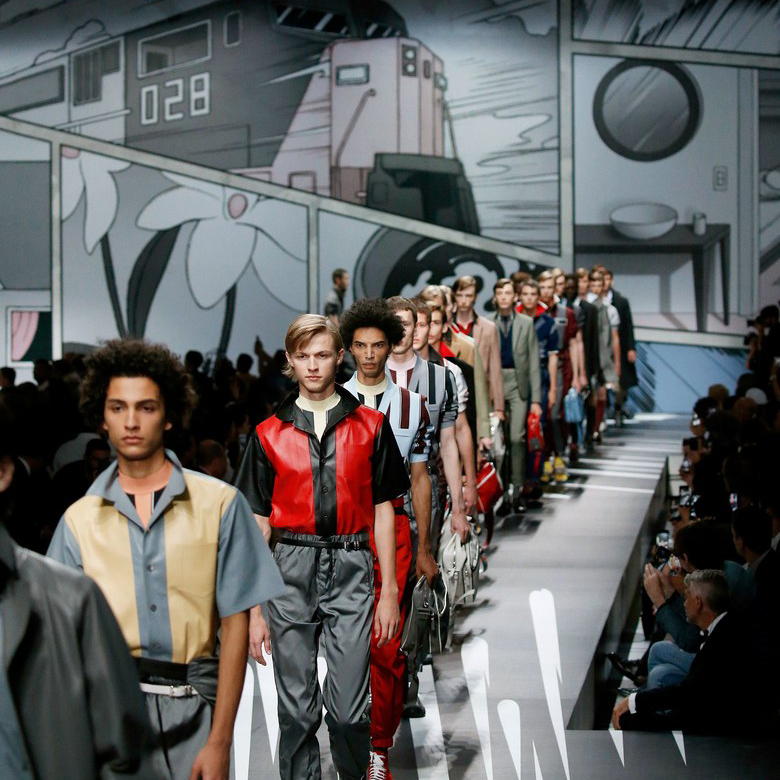 Despite not being an avid comic fan, Miuccia Prada’s latest outing was nevertheless inspired by it: “They are hand-drawn, human, simple and real. Even if they contain, of course, all the worst fantasies, they look simple. They are little fragments of life, which is what you get now from the information, the media. So I was more and more attracted by them. Even if I never liked them.”

With superhero blockbusters saturating the theatres, the unprecedented move was timely. Along with a litany of striking jumpsuits and multiple fanny packs, came graphic comic strips printed on shirts and cape-like jackets. The ugly-chic Pradaman might have just saved the day for MMFW.