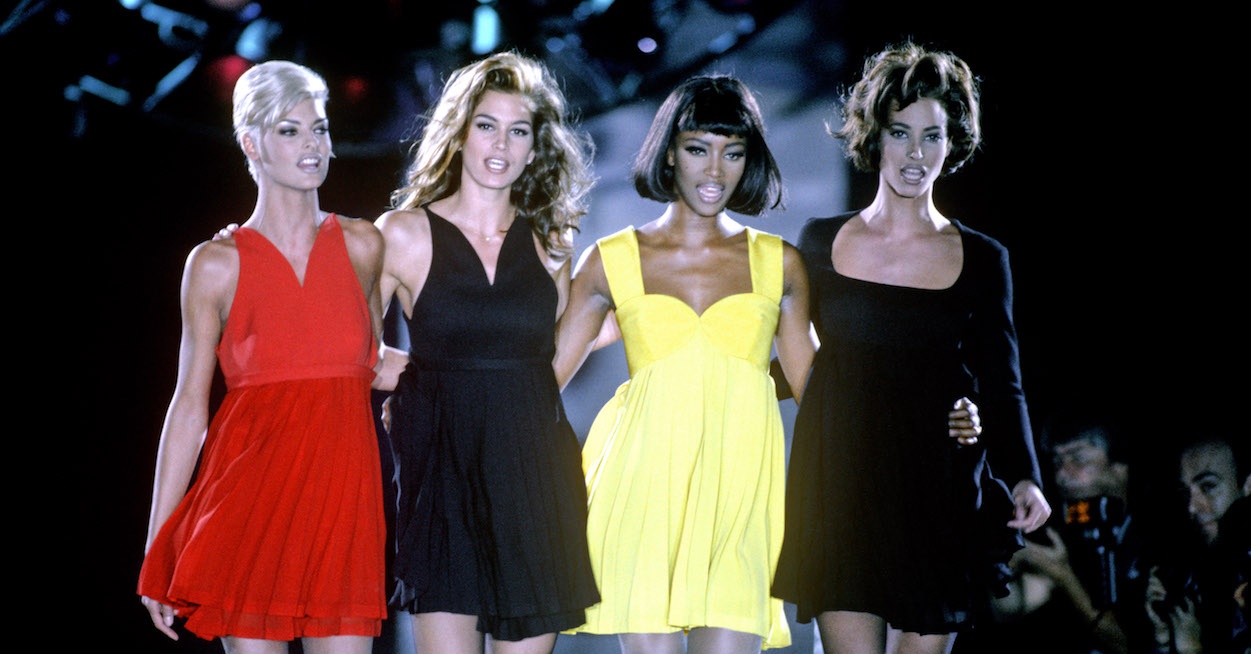 So shared Naomi Campbell on her encounter with the word “supermodel” — a term that she, along with Christy Turlington, Linda Evangelista and Cindy Crawford, would define all throughout the nineties.

You may also like…
Style
Icons before Instagram: Naomi Campbell celebrates three decades reigning runways
Style
In the know: 5 new fashion documentaries to watch this year

Back then, the foursome were everywhere. They fronted fashion magazine covers and campaigns. They walked the runway shows of Chanel, Versace, Azzedine Alaïa, Valentino and every other designer brand that could afford them. They attended glamorous after-parties. They did perfume ads. They starred in music videos. They even appeared on gossip columns, whether they liked it or not. Back then, Christy, Linda, Naomi and Cindy were the most famous women in the world.

Today, the “supermodel” label is applied liberally on any celebrity offspring or rich kid with the right fashion connections and a huge Instagram following. The new supermodel doesn’t need talent; she just needs a trust fund. But that’s not the story of the original supers, which will now be told in a new documentary series for Apple TV+.

The Supermodels will be produced and feature the OG supermodels themselves. The show, spearheaded by Academy Award-winning director Barbara Kopple, will trace the famous four’s unparalleled modelling careers and examine their impact on the fashion world.

For the first time, we’ll get an inside look at some of the most iconic moments in fashion. Christy, Linda, Naomi and Cindy lived through them all, from the Vogue cover that birthed the supermodel era to the Versace show that changed the runway forever. Below, we highlight all those unforgettable moments that we hope are recaptured in The Supermodels.

British Vogue, January 1990. That’s the magazine that established “The Big Five” supermodels: Christy, Linda, Naomi and Cindy, as well as Tatjana Patitz. They appeared on the cover captured by the late, legendary photographer Peter Lindbergh. He shot in black and white, instead of colour. He set it against the gritty backdrop of downtown New York, instead of a pristine studio.

Most importantly, Lindbergh shot his fresh-faced subjects as they were, making each girl’s distinctive presence shine through in the photographs. These weren’t just faces; they were personalities. In more ways than one, this cover heralded the start of a new fashion era coinciding with the new decade.

“We have this expression, Christy and I. We don’t wake up for less than $10,000 a day,” said Linda Evangelista in her interview for American Vogue in 1990. The quote, now one of the most famous ones in fashion history, was meant as a joke. But Linda, only in her early twenties, didn’t have a PR person to warn her of the backlash that would soon follow. “That quote has haunted us for years,” Naomi would later reveal in her self-titled book. “Up until then we had spoken to the press quite freely, but after that we realised we had to be careful. It was a valuable lesson to learn.”

Instead of appearing in his own music video, pop superstar George Michael cast the supermodels he saw on the aforementioned British Vogue cover to lip-sync in his place. David Fincher directed the six-minute clip, bringing out the models’ different personalities. Christy made a dramatic entrance enveloped in a white sheet, Cindy had her steamy solo in a bathtub, and Naomi filmed her dancing scenes on no sleep, having flown in straight from Paris. As for Linda, who needed the most convincing to do the video, she transformed into a platinum blonde beauty. “Little did I know that to this day, when someone meets me for the first time, they bring up that video,” she shared later.

Before the influencer-lined front row, before the celebrity catwalk moment, there was Gianni Versace’s F/W 1991 show. At the time, models either worked exclusively in print, or walked for the runway. Versace decided that the supermodels could do both. With George Michael’s Freedom! ’90 playing in the background, the designer sent the four cover girls down the runway to close his show together. Everyone, especially the photographers, went into a frenzy. It was, in the words of fashion critic Tim Blanks, “a fashion moment of Biblical proportions.”

‘Three Models in a Tub’

Besides their powerful presence and Amazonian figures, the supermodels were all the more captivating for their natural chemistry with one other. That’s especially true of The Trinity — Naomi, Linda and Christy — who partied hard and worked even harder “so we can see each other,” revealed Naomi in their People feature in 1990. This candid photo by Roxanne Lowit, taken at a Versace after-party, is a vivid example of their camaraderie. Fun fact: they were laughing at Sylvester Stallone, who walked in and jokingly threatened to pour champagne over them. Kendall Jenner and her model friends would recreate the iconic photo years later, albeit without the magic of the original.

Fashion photographer Steven Meisel, who affectionately referred to The Trinity as the “Ugly Sisters”, cast them in his Vogue Italia editorial for the May 1993 issue. They were joined by other mega models of the moment: Amber Valetta, Shalom Harlow, Kristen McMenamy and Nadja Auermann. As proof of their star power, they were dressed simply in oversized white shirts and clad in natural makeup looks. That was all it took to sell the magazine, which remains one of the most coveted issues for collectors today.

Supermodel group shots were a phenomenon of the nineties, but nobody channeled their power better than Gianni Versace. The Italian designer frequently had the supers fronting his campaigns, which were only made more memorable with the lens of renowned photographer Richard Avedon. This particular campaign, starring Cindy Crawford, Christy Turlington, Nadja Auermann, Claudia Schiffer and Stephanie Seymour, is considered one of fashion’s most iconic photographs.

The OG supermodels are unmatched, and nobody knows this better than Olivier Rousteing. The French designer tapped on Naomi Campbell, Cindy Crawford and Claudia Schiffer for Balmain’s S/S 2016 campaign, wanting to recapture the emotion of ’90s fashion. The black-and-white images by Steven Klein, which were an homage to Lindbergh’s British Vogue cover, showcased the supers very much in their element, two decades later.

Of course, no list of supermodel moments would be complete without the finale of the Versace S/S 2018 show, when Cindy Crawford, Naomi Campbell, Carla Bruni, Helena Christensen and Claudia Schiffer made a surprise appearance dressed in golden gowns. Donatella Versace wanted to pay a tribute to her late brother, and what better way to do that than with a fashion moment made for the 21st century?