Shortly after rumours of a potential Air Trainer 1 release, it turns out that the rapper, sneakerhead, and designer may also be releasing a killer pair of  Air Jordan 1 OG Lows (pictured below) in the coming months. Until we get more news on that though, there are other new sneaker drops this week that are just as worthy of your attention.

Kanye and adidas, for one, will be having a busy week with not one, but two releases this week. The adidas YEEZY BOOST 700 MNVN, which has been teased at for months, will finally drop in a striking “Honey Flux” colourway. Fans of the Adidas YEEZY BOOST 700 V2s will also appreciate the “Mauve” release that may be happening this week.

Here are all the new sneakers dropping in the third week of September 2021, with all the details you need to know. Still thinking about that “Geode” colourway from 2019 but don’t want to get fleeced on StockX? These new “Mauve” iterations are a good alternative, with a similar, muted shade of brown that’s accompanied by black suede overlays on the toe boxes, heels and mudguards. The BOOST midsoles come rendered in the same matching brown tone, instead of black like on the “Geode”. Reflective details are still plenty here though; you’ll find them on the lace, quarter panels and heels. After months of teasing, the 700 MNVN “Honey Flux” finally drops today. Like the rest of the colourways from this model, this one too is inspired by motorsports, with an upper that’s rendered a shocking shade of titular yellow and a reflective 3M “700” marking in silver. Black contrasting details on the tongue, laces, and sockliner add even more sportiness to the look, as do the sculpted black BOOST midsoles and matching outsoles. It’s been 15 years since the Mobile Suit Gundam Unicorn series, and celebrations are in order. For fans of both sneakers and the anime, the party kicks of with these Dunks, inspired by its protagonist Banagher Links’ RX-0 Unicorn Gundam in Destroy Mode. Here, the premium white leather upper is outlined with bright red piping details, and can be switched up with interchangeable Swooshes, which resemble Unicorn Gundam’s horn. The white midsoles are also lined with red stitching, with black rubber outsoles to match the robot’s colourway. Besides Swoosh alternatives, you’ll also get a sheet of decals to play with — just as you would with the model kits.

New Balance’s sneaker revivals over the past year have put it back into the rat race and it’s not about to stop anytime soon. Another retro-inspired shoe that’s resurfaced is the 997H, a lightweight sneaker that’s known for its comfort, only this time colour-blocked for an even more old-school touch.

“Spruce/Gold” will see shades of green, blue, grey, and yellow meet a subtle gold “N” logo at the side, while “Burgundy/Navy” sports the two brooding shades and a yellow “N” logo. Whichever you choose, both releases are perfect for autumn. 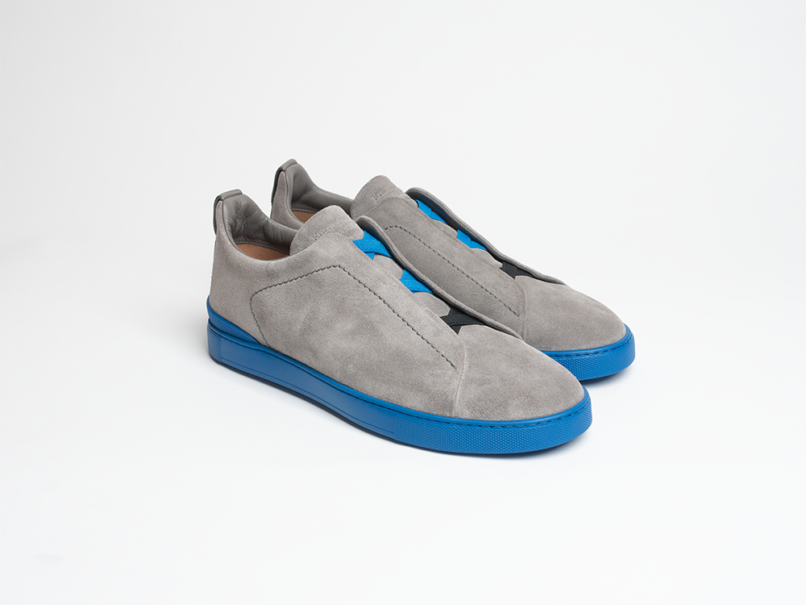 Not content with transforming Bulgari watches, Grammy-nominated DJ, producer, designer, and entrepreneur Steve Aoki, has joined Zegna’s global community of Modern Voices, this time, however, putting his mark on its Triple Stitch Sneaker.