Just like that, New York Fashion Week Spring 2018 is done and dusted. The week was cut short this year by a day, thanks to a small but still influential number of labels — including Altuzarra, Rodarte, and Proenza Schouler — deciding to display their designs in Paris instead, and causing some to hyperventilate about the depleted state. But as it turned out, fashion critics’ questioning of the Big Apple’s relevancy was for naught.

Fashion, as we know, is cyclical. And as New York is ushering in a host of new, emerging designers for this season, it feels like NYFW is getting a fresh lick of paint — you know, that striking new paint smell that lingers in your nose, and makes your heart race a little? The unfamiliar names that made this year’s line-up marched in with their own bold, experimental streak; a 180 degree change from the commercial sensibility that’s been synonymous with the fashion capital for the longest time.

It’s out with the old and in with the new. From the comeback of a Shayne Oliver-fronted Helmut Lang to the Brooklyn collective Vaquera making disruptive waves, scroll down and meet the fresh batch of design auteurs that’s set to revolutionise future NYFWs. 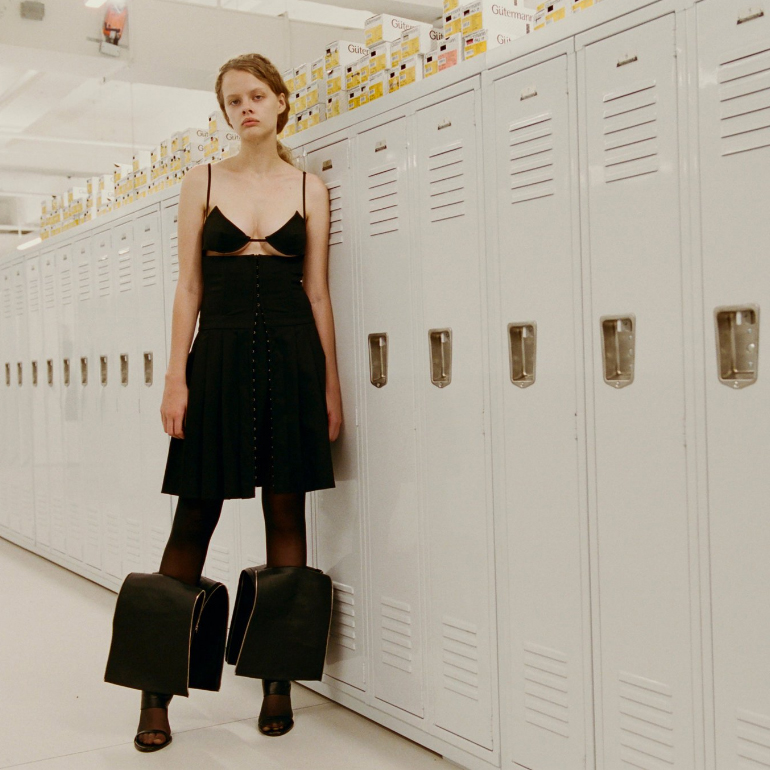 Need to know: Helmut Lang is hardly a new name — but when its creator Lang left the label for good in 2005, subsequent designers never recaptured the essence and influence it used to possess. Now, spearheaded by Shayne Oliver and editor-in-residence Isabella Burley, the once-diminishing label has been bestowed a new lease of cool.

For Spring 2018: Oliver and Burley are pushing Lang’s subtlety into a more explicit direction: Sharp tailoring takes on a breast-centric path (there are even XL bra-shaped bags); outerwear has exaggerated proportions; slinky long dresses are present in deconstructed shapes. The feel is almost Helmut Lang-meets-Hood by Air, the label Oliver put on a hiatus for his tenure at the house of Lang. “We kind of ignored everything Helmut, to be honest,” the designer said to the New York Times. 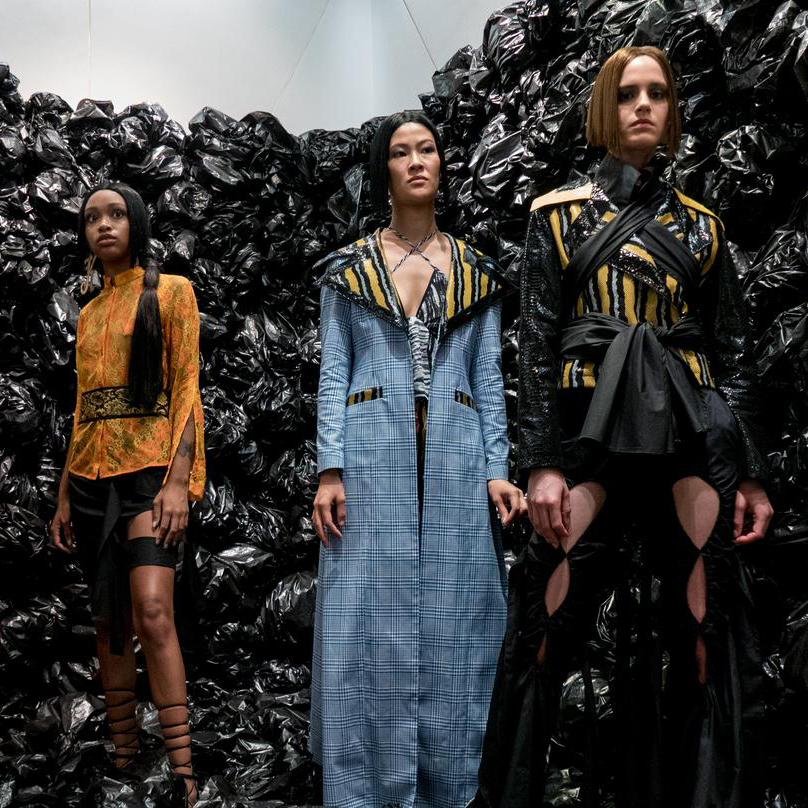 Need to know: Kim Shui is a Parsons and Central Saint Martins graduate, who made her eponymous label’s debut at the VFiles Runway last year with a potpourri of acidic tailoring and opulent textiles — a well-executed riff on what could have turned out in bad taste. Shui’s only entering her sophomore year as a designer, yet her label’s understated following of ‘It’ girls include names like Solange, Kylie Jenner, Sita Abellan, and Cardi B.

For Spring 2018: Showcasing at a Century 21 department store, Shui’s high-low mix couldn’t be at a more apt venue. Her in-your-face pieces made of chintzy cheongsams, sheer lace jumpsuits, and velour cheetah sweats stood out amidst a backdrop of piled plastic trash bags. Shui told i-D: “I’m using materials that are raw, with richer fabrics like brocades and snakeskin. We wanted to re-contextualise a runway show and bring in an element of chance. There’s water on the runway — external factors are a part of everyday life.” For Spring 2018: Lak has an unabashed penchant for colours you would never have thought looked good, and his latest offering marshals tacky tangerine to celery greens with exuberance. A suit came in copper-toned laminated jacquard, while on-trend pyjama co-ords came in crinkled iridescent teal and were layered with a heavy shearling coat. These pieces were confident nonchalance at its best. 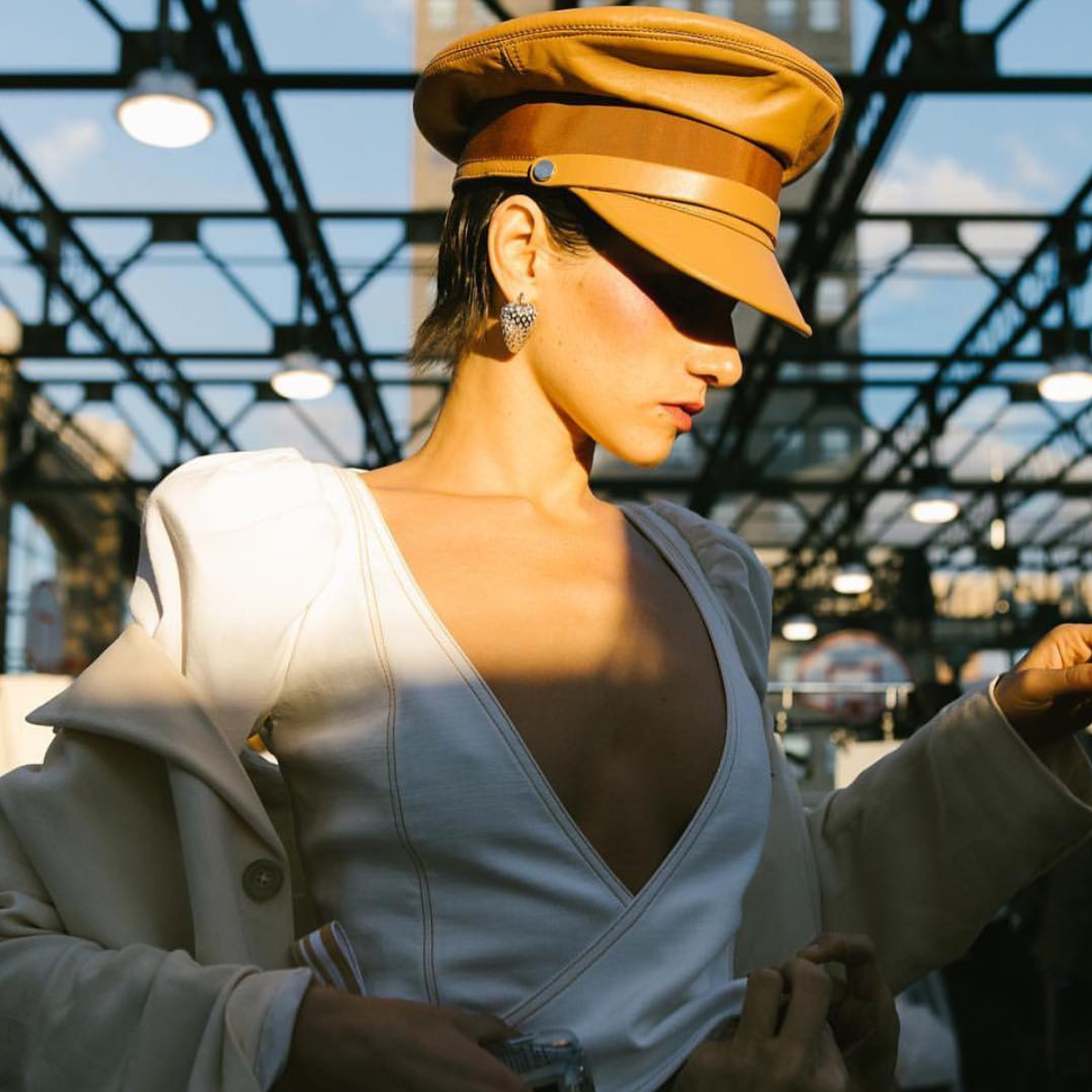 Need to know: Design duo Beckett Fogg and Piotrek Panszczyk aim to encapsulate the definition of “glamour” with Area, the label they launched in 2013 after meeting at Parsons. And so they did, through stretch crocodile-printed lamé disco dresses, Dalmatian-embossed silk-twill head-to-toe pieces, and obscenely large Swarovski-studded earrings that Kendall Jenner and Bella Hadid can’t seem to get enough of.

For Spring 2018: This season, Area proffers its glitzy method to nine-to-five dressing, putting a slight brake on its usual shimmery disco gear with office-apropos staples that employ an electric colour palette. “It’s a new kind of sexiness,” the Area pair explained backstage to Vogue, speaking about the importance of daywear, diversity, and joy in this season’s line-up. For Spring 2018: Vaquera often channels its youthful DIY aesthetic into an exploration of classic American coming-of-age tropes, and this season is no exception. Based on the theme of “existential crisis”, its show featured surfer gear and executive realness, juxtaposed with a cheeky dress constructed entirely of vanity credit cards printed with a spoof of the iconic Hollywood sign (instead of “Hollywood” there was “Vaquera”). This is a brand that clearly believes in not taking everything too seriously. We hear you, Vaquera.