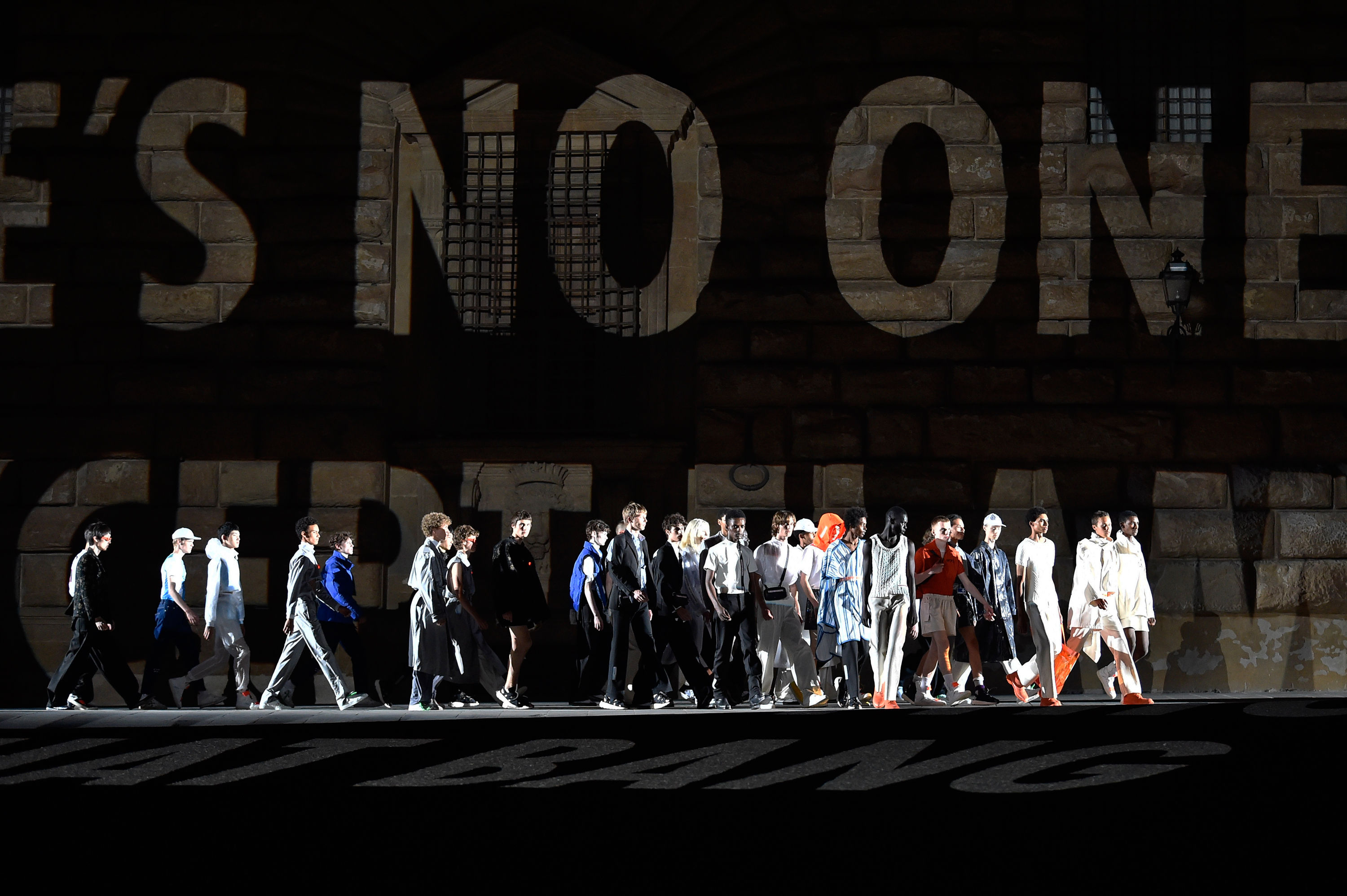 Off-White and J.W.Anderson brought the cool kids to Pitti Uomo

Style
Off-White and J.W.Anderson brought the cool kids to Pitti Uomo
Share this article
Next article

Pitti Uomo sure knows how to pick the cream of the crop. The Italian menswear design trade show convinced past alumni Raf Simons and Gosha Rubchinskiy to swap Paris Men’s Fashion Week runways for Florence’s last year. This season — which ends today — taking on centre stage as the showcase’s special guests were men’s fashion iconoclasts: J.W.Anderson and Off-White.

As the saying goes, great minds think alike. Both wild cards from the menswear pool, creative directors Jonathan Anderson and Virgil Abloh are polymaths embracing blurred lines and championing gender-bending designs without hesitancy, albeit in their own different approach. Anderson’s namesake brand is known for painstakingly curated pieces that lend unconventional beauty to any editorial spread they’re gracing, while Abloh’s Off-White is the luxe streetwear label digital-embracing millennials look to for their daily uniform.

Consecutively presenting their collections at Pitti Uomo for the first time, J.W.Anderson and Off-White didn’t let the surprise end there. Here’s what you need to know from their Florentine debuts.

Generally, the word “normal” would be the last thing anyone would use to describe a J.W.Anderson collection. Yet, there’s no other way to describe the Irish designer’s latest offering that features basic tees, chino shorts and flip flops (gasp!) other than, well, normal.

Anderson’s Spring 2018 collection was presented amid the hedges of the stunning Renaissance-era Villa La Pietra’d gardens. Instead of drawing inspiration from past seasons like he usually does, the Irish designer opted this time for a pared down wardrobe that mirrored his own closet. “I wanted to tackle the idea of basic, and it’s probably the most difficult exercise I’ve ever done,” the designer admitted after the show.

Trying every piece of the collection on himself was also another first for Anderson. It was to avoid treating his creative process as “external”, he said. “I feel like I’m a part of it this time.” Although his eroticised vision remained intact — variegated hearts rendered into witty motifs: Mondrian-like on a tight knit sweater, patched onto a wide-lapel coat, or scattered on a tough leather jacket — there was a clear shift to the J.W.Anderson man.

“We need to reduce back. We need to redefine what menswear is,” Anderson said. “To try to reduce the essence of J.W. Anderson into something basic, you have to pull back a lot.”

What made it special: Marking the British label’s 10th anniversary, an unexpected Converse collaboration was unveiled at the Pitti Uomo show. Classic Chuck Taylors came in eccentric iterations of linen, denim and two-tone glitter. It seemed like Anderson took his inspiration from the venue: “When we came to Florence, I would see American, Japanese and British tourists walking around,” the designer said. “I liked this idea of the kid in denim shorts with a t-shirt and a pair of Converse shoes.”

Abloh’s statement made clear what his agenda for the night was: To connect the dots between fashion and current world problems, however unlikely it sounded. Countless refugees crossing the Mediterranean in hopes of a safe haven have drowned, and Abloh, a son of immigrants, took it upon himself to zero in on the matter through the tailoring of Off-White.

Utilitarian clothing dashed with spritzes of orange were made to recall rafts, inflatable vests and mariner’s hoods. It was gorpcore, elevated in the deconstructed Off-White way to carry Abloh’s political ambition to contribute in the conversation. “In this climate, coming off recent elections, I have a voice. In my work, I react,” said the multi-hyphenate.

What made it special: Artist Jenny Holzer’s colossal projections of scrolling texts on the outside of the building became the seizing backdrop of the show. Holzer selected Anna Swirzynska poetry, which was written during the Warsaw uprising of 1944, and was in line with the conflicts currently taking place in Syria and Palestine. Models, who walked under the light of Holzer’s work, were minuscule in comparison.