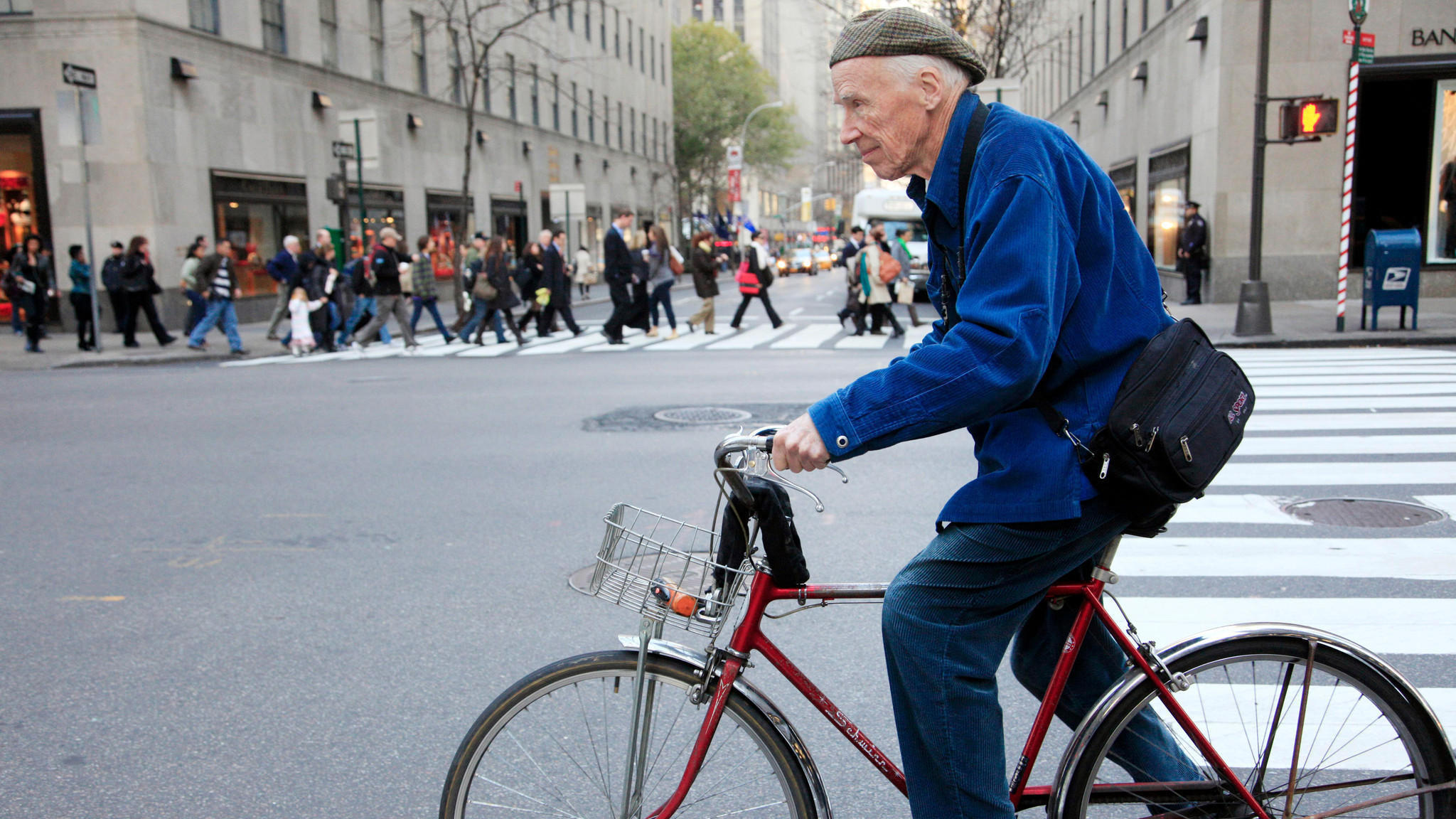 He was always clad in his blue workman jacket, straight-legged pants, and black shoes. Of course, he’d also always have a Nikon camera hung around his neck. For years, that was legendary fashion photographer Bill Cunningham’s default uniform.

The jacket might not have been the trendiest (well, unless you count Spring Summer 2016’s utilitarian trend), or the most expensive, but it was what he wore when he took his countless statement-making pictures. In fact, as GQ.com reports, the photographer picked up his signature blue jacket at a French hardware store for just twenty dollars.

Originally designed for working-class men, it had large pockets in the front, where Cunningham stored his rolls of film.

Born William John “Bill” Cunningham Jr. in Boston, young Bill dropped out of Harvard just so he could move to New York City in 1948 to pursue a career in advertising. Not long after, he went on to set up a millinery store on 52nd Street under the brand name ‘William J’. This was where he lived, too.

“I could never concentrate on Sunday church services because I’d be concentrating on women’s hats.” Cunningham told The New York Times in 2002. His stylish, flamboyant hats proved to be a runaway hit, and he attracted many famous clients including American philanthropist Rebekah Harkness, and actresses Katherine Hepburn and Marilyn Monroe.

In the years that followed, Cunningham was drafted into the US army and had to take a break from his business. He returned to making hats in 1953, and even began writing fashion stories for Women’s Wear Daily and the Chicago Tribune.

Cunningham’s first foray into street photography was during World War II, when he snapped pictures of passersby using a little box Brownie, a popular and inexpensive camera made by Eastman Kodak. But back then, taking photos was only a hobby.

It was a serendipitous meeting that sparked his decision to make it a career. During his stint at the Chicago Tribune, Cunningham befriended famed illustrator Antonio Lopez, and mentioned his interest in photography. Lopez later invited Cunningham to a dinner with professional photographer David Montgomery. Montgomery and Cunningham hit it off, with the former even presenting Cunningham with an Olympus Pen-D half-frame as a gift, several months later.

Equipped with the tools for his newfound career, Cunningham began shooting street photography for Women’s Wear Daily and The New York Times. He famously never took a paycheck for his photos, as being paid would entail having to adhere to the company’s requirements, and hence compromising his work. “Money is the cheapest thing — liberty and freedom are the most expensive,” he said in the 2010 Philip Gefter documentary, Bill Cunningham New York.

For Cunningham, his photos were always about the clothes and never the celebrity. He once accidentally took street style pictures of Greta Garbo without realising it was her — all he noticed was the amazing coat she had on. The same happened when he snapped pictures of Farah Fawcett, for he neither owned a television set nor went to the movies.

“I’m not in it for the celebrities in their free dresses. Look at the clothes, the art, the cut, the new cut, the inspiration, the cloths — that’s everything. It’s the clothes, not the celebrity, and not the spectacle,” Cunningham told the crowd when he was awarded France’s Légion d’Honneur in 2008. The year after, the New York Landmarks Conservancy made the legendary photographer a living landmark.

For nearly forty years, the man in a blue jacket would pedal through the streets of New York (and often other fashion capitals) tirelessly in search of interesting and eye-catching ensembles. He’d then personally edit and put the images together with his assistant for The New York Times.

“We all get dressed for Bill,” said Anna Wintour, editor of Vogue magazine, in Bill Cunningham New York. “It’s always one snap, two snaps. Or he ignores you, which is death.”

Perhaps, Cunningham never celebrated fashion for all its glory, but for how it mirrored the culture and world he lived in. “The wider world perceives fashion as frivolity that should be done away with. The point is that fashion is the armour to survive the reality of everyday life. I don’t think you can do away with it, it would be like doing away with civilisation,” said Bill in the same film.

Cunningham passed away on 25 June, 2016, from a stroke. He was 87. Following his death, over 6,000 people signed a Change.org petition to name the corner of 57th Street and Fifth Avenue (a place he was often spotted, snapping away) after him. For a week, New York City honoured Cunningham and his work by naming it the “Bill Cunningham Corner”.

It was an apt tribute, for a man who loved and found inspiration on the streets. “I go out every day. When I get depressed at the office, I go out, and as soon as I’m on the street and see people, I feel better. But I never go out with a preconceived idea. I let the street speak to me,” Cunningham said to The New York Times in 2002.

Cunningham did not influence people by the way he dressed — he made his mark on the sartorial scene because of his obsessive dedication, humility, and democratic eye for fashion. And for all these reasons, he has left behind a legacy that stands the test of time in the volatile, ever-changing world of fashion.

Fashion Style Photography New York Photographer icon Streetstyle The Original Style Influencer Bill Cunningham
Gracia Phang
Sign up for our newsletters to have the latest stories delivered straight to your inbox every week.