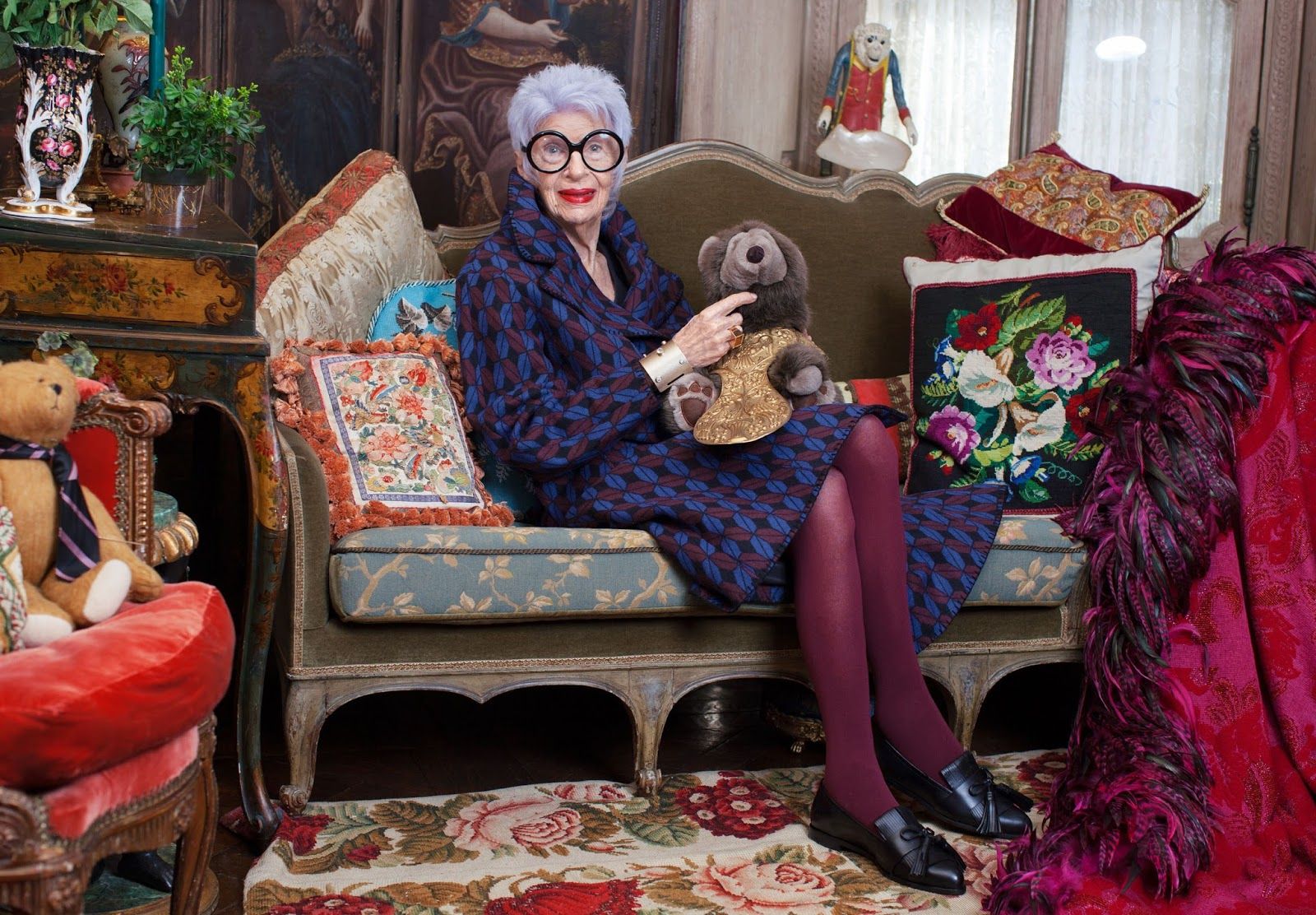 She’s a brilliantly blunt, undeniably confident, and often dresses like a peacock with its tail feathers in full plume for the world to admire. At 95, Iris Apfel is no fashion designer, but she’s a fashion icon in her own right. If we had to put it in modern terms — a style influencer, and one of the original ones any decent fashion Instagramming millenial should know.

Early years
Born and raised on a farm in Queens, New York, the slender Apfel was plump as a child. “I was fat,” she told The Guardian in 2015, “And it drove my mother crazy, because she was very elegant and she wanted me to be dolled.”

That did not stop young Apfel from being interested in clothes and accessories. She took every Thursday off school to explore the nooks and crannies of Manhattan, and fell in love with Greenwich Village. “The village was where I started to poke around antique shops and become enchanted with all this old junk,” she said of her obsession with flea markets and vintage shops.

As a young adult, Iris Apfel took on an apprenticeship with an interior designer, and then discovered her flair for sourcing rare finds and putting them together to complement spaces. She met her future husband Carl Apfel in 1948, got hitched a year later, and started textile company Old World Weavers (now owned by Stark) together in the ’50s.

Carl Apfel: Lover, Business Partner, Friend
“Carl and I, from the time we married, we did everything together,” Iris Apfel said in an interview with T Magazine last year, “We worked together, we traveled together, we lived together — until just recently, I never went anywhere without him.”

When Old World Weavers took off, they worked on the White House, the State Department and Metropolitan Museum of Art. The duo also worked with personalities such as Greta Garbo, Jackie Kennedy and the Nixons. “Mrs. Nixon, strangely enough, was the most interested of all the ladies. She was passionately interested. Most of them didn’t give a damn,” said Apfel of her favourite client, in a 2015 interview with The Daily Beast.

Carl and Iris were not just great business partners, they were wonderful life partners. Evident in the Albert Maysles-directed film, Iris, the duo had an admirable marriage. “There was something about her that just got into me; it’s always there,” Carl said of his wife in the film, before she interrupted with a laugh, “And I figured he was cool, and he was cuddly, and he cooked Chinese, so I couldn’t do any better.”

As the husband of a fashionista, Carl Apfel was quite the stunner himself too. Often seen in a pair of round plastic-framed glasses (similar to his wife’s), he used to turn upholstery at Old World Weavers into pants for himself. And when someone asked him where he got those pants, he’d reply, “I shot my couch.”

Apfel’s partner-in-crime for over six decades passed away on 1 Aug 2015 — just a couple days shy of his 101st birthday.

Follower of none, muse to many
What most would consider a late bloomer, Iris only rose to fame in her 80s when  the Metropolitan Museum of Art premiered an exhibition in her honour. Titled ‘Rara Avis (Rare Bird): Selections from the Iris Apfel Collection‘, it celebrated her ability to transform herself into different personas (in the best way possible) through clothes and accessories from luxury fashion brands to flea market finds.

This exhibition opened doors to many exciting opportunities for Apfel, such as two Kate Spade New York campaigns alongside Karlie Kloss in 2015, and one with Jourdan Dunn in 2016. Other notable works include the Alexis Bittar ad campaigns, and being appointed the brand ambassador of Citroën‘s new DS3 supermini. The latter sees her appearing in the French car manufacturer’s print and television advertisements.

What’s particularly noteworthy is that all the brands she has worked with, have fully embraced her knack for layering accessories and clothes of clashing colours and prints. Her advertisement for Citroën, for example, sees her decked out in an unabashedly flamboyant mix of accessories. “I think people like me because I’m different. I don’t think like everybody else,” Apfel told The Guardian last year.

Age is but a number
Having described herself as “the world’s oldest living teenager,” the bespectacled fashion legend credits her early style inspiration to her mother, who apparently was a huge accessory-wearer like herself, and dressed like the Duchess of Windsor. “She was very proper. Everything was just so,” Iris said of her mother to The Daily Beast last year.

Unlike fashion bloggers and influencers, as so they’re called, she doesn’t take fashion too seriously and isn’t particular about the labels on her apparel. The self-proclaimed bargain hunter is happy with a four-dollar bargain find, as she is with a thousand-dollar necklace. A true queen of flea markets and haggling (her eyes light up just talking about it), watch her work her magic in Iris, and you’ll be amazed.

As aptly quoted from her 2015 interview with The Daily Beast: “Copying someone else’s style is not being stylish. Style implies attitude, mostly, and originality. And if you have those two, well, you’re done.”

Iris Apfel inspires us not just in the realms of fashion, but in the way she lives her life by embracing the moment, and living each day to the fullest.

So what makes Iris an original influencer? She’s got more than style, she’s got a story.