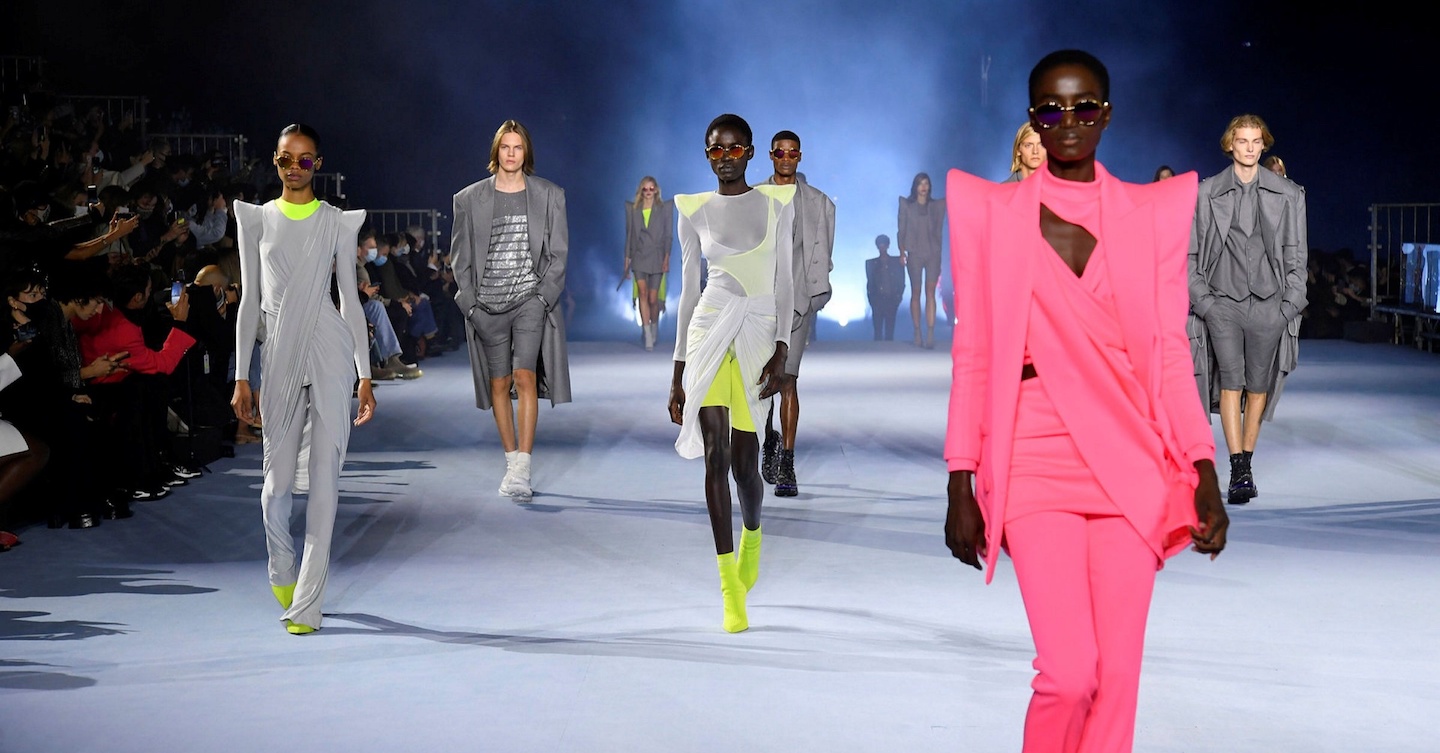 If Paris Fashion Week could be summed up in a single clothing, it would be a hoodie.

The one in question is white, simple, and likely resembles the one you’ve been wearing while working from home, save for a slogan that reads: “Paris Fashion Week”. The words are pixellated, not fully transferred onto the physical realm — much like the shows that designers unveiled for Spring/Summer 2021.

You might also like…
Style
Milan Fashion Week: Raf’s first Prada show, Fendi pasta and more highlights
Style
Balmain joins Apple Music to give fans an inside look into the brand’s inspirations

That includes Demna Gvasalia, the man behind the aforementioned hoodie. The Balenciaga designer didn’t even have a show, not in the traditional sense. This season, he had the chance to present his collection where they’ll eventually end up anyway: the streets.

The message was to dress up, not down. That’s even if you’re staying home, as Dior and Balmain considered, and taking that Zoom call. Our recent reliance on chunky sneakers and sweatpants did nothing to deter designers from making bold statements (often with shoulders) at PFW.

The most daring collection belonged to Matthew M. Williams, who has finally revealed his first collection as creative director of Givenchy. It was nothing like the Givenchy we’ve known — but then again, neither was fashion this season. Or the world, for that matter.

And it’s that “anything goes” attitude that was captured in PFW, especially by the fashion brands that staged actual shows during the pandemic. That’s something Gvasalia’s work has always embodied, yet for once even the prescient designer is stumped about the future of fashion. Aren’t we all?

For now, we have clothes to dream about, clothes that we may one day wear on the streets, as carefree as we once were. On the other hand, we also have clothes that we can already see ourselves living in if the world doesn’t get better — like that Balenciaga hoodie. Below, we highlight all the different proposals that were offered at PFW by French fashion’s biggest designers.

Even before the pandemic, Demna Gvasalia’s Balenciaga has always marched to its own beat. This season, it was literal: the French brand ditched the fashion show for a music video. The setting was Paris after dark; the song was a remix of Corey Hart’s ’80s electropop hit, “Sunglasses at Night”. Indeed, that’s what the Balenciaga models wore as they stalked the streets in Gvasalia’s oversized coats, slouchy suits, hoodies, sweatpants, and slinky dresses — for both him and her.

Gvasalia is doing away with gendered clothing for the sake of sustainability, which is also why he produced his collection largely from upcycled materials. Like fellow Kering-owned label Gucci, Balenciaga takes going green very seriously. Gvasalia’s collection was his vision for fashion’s future: unisex and upcycled. Or at least, he hopes. As much of a trendsetter he may be, the designer still has his uncertainties — which the models’ wraparound sunglasses represented. “Where is fashion going?” Gvasalia asked. “It’s out there, searching in the dark at the moment, not seeing…”

Such an existentialist question wouldn’t have bothered Olivier Rousteing much. “For me, you can’t understand the future without understanding the past,” shared the Balmain designer. The past in question was Pierre Balmain’s, and his contributions to fashion in the seventies: slender pantsuits, high-waisted flares and blazers with padded shoulders. Rousteing revived them all for the heritage portion of Balmain’s SS21 show, and branded them with a PB monogram from the era.

You’re going to be seeing a lot more of that logo, if the rest of the collection — AKA the modern portion — is any indication. That, and pagoda shoulders, which peaked on neon double-breasted jackets, grey suit blazers, both denim as well as leather jackets, and pretty much every other top that was shown. Rousteing wanted to create a “head-to-waist” silhouette that would translate well on a Zoom call. His case was best made not on the runway but beside it, where rows of TV screens projected Balmain’s virtual front row guests — including Jennifer Lopez, who was pointedly dressed in a Balmain-branded bustier and blazer.

Like Rousteing, Matthew M. Williams is another relatively young designer tasked with reimagining a historic French fashion house. His made his debut at Givenchy with no hesitance, writing over Clare Waight Keller’s codes for the house (refined, elegant) with his own (precise, edgy). Williams injected his first collection with that blend of industrial and sartorial that defines his own label, Alyx, along with a dose of luxe — see the crystal embellishments and crocodile leather.

Other high-shine details to note are the locks and logo chains, which were teased on Givenchy’s Instagram last week. (Williams is a hardcore for hardware; buckles are his signature at Alyx.) These metal pieces, which appeared on the sharp suits and the Antigona bags, are how the designer is marking his new chapter at Givenchy, in lieu of a monogram. Still, there were traces of Givenchy’s ghosts to be found: the strong shoulders were a nod to Hubert de Givenchy; the embellished slip dresses, to Riccardo Tisci; and the horned heels and divisive three-toe sandals, to Alexander McQueen.

If you thought Matthew M. Williams’ Givenchy debut was audacious, Maria Grazia Chiuri was even bolder. This season, she broke away from the architecture of Christian Dior’s couture altogether. Instead, Chiuri offered loose, slouchy silhouettes — think kaftans, kimono jackets, palazzo pants and peplos dresses — that were comfortable enough to lounge in, yet lavish enough to step out in. In true bohemian spirit, she achieved the latter with patterns plucked from around the world, from Mediterranean paisleys to Indonesia Ikat prints.

If the Dior show (staged IRL) sounds like it was chock full of Chiuri clichés, that’s because it was — whether the designer intended it or not. Toward the end, an audience member walked onto the catwalk with a slogan banner in hand: “We Are All Fashion Victims”. But the rest of the guests didn’t even blink an eye, believing the stunt to be part of the show. It was really a protest on behalf of London climate group, Extinction Rebellion — two words which, depending on your point of view, describe Chiuri’s impact on the heritage of the fashion house she helms.

Like most of us, Nadège Vanhee-Cybulski has been yearning for the human touch. The Hermes designer reflected this in her women’s collection: bodysuits were sliced at the sides to reveal the hips; tailored jackets were styled with crop tops, or transformed into sleeveless vests; and dresses were layered with cut-out aprons, adding sharp lines that contrast with the body’s curves.

The collection bore the sensual minimalism perfected by Helmut Lang — who recently unveiled a line of sculptures made from shredded Saint Laurent accessories — and the quiet confidence of Phoebe Philo, with whom Vanhee-Cybulski had previously worked for. The latter connection was made all the more obvious by the location of the Hermes show: the Tennis Club de France, where Céline’s shows used to be staged during a bygone fashion era.