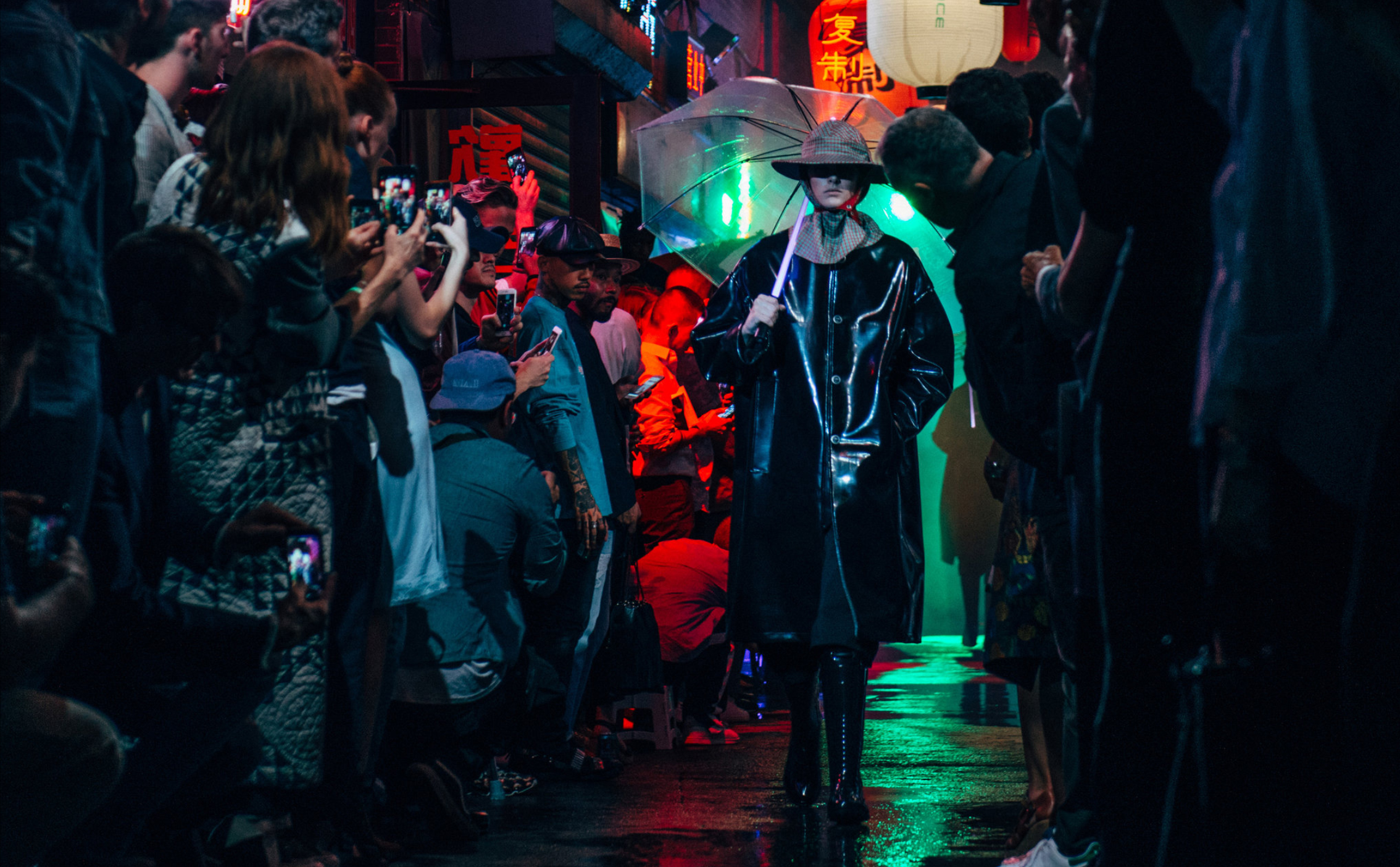 The final leg of Spring 2018 men’s fashion week has just wrapped. And while there were interesting young labels — Linder and Patrik Ervell to name a few — sharing the NYFWM threek (that’s three-day week to you) schedule with legacy mainstays — Hugo Boss and Perry Ellis — there was only one show on the schedule that actually made the global fashion community stand still and pay attention: Raf Simons.

Here’s how Raf Simons did his second show in New York.

Setting it at a Chinatown market

Following his move to New York to head Calvin Klein as chief creative officer, Simons also decided to showcase his eponymous men’s line in the city as well. On Tuesday night, he staged a show at a market in Chinatown within a Blade Runner-inspired set. Eschewing assigned seating system for standing spaces, A-listers the likes of Julianne Moore and Jake Gyllenhaal mixed in with the fashion set — rapper A$AP Rocky, model Hanne Gaby Odiele and designer friend Marc Jacobs.

If the flood of rave reviews was any indication, oh boy, did Raf Simons deliver. Although his team gushed water on the floor and hung up Chinese lanterns for a heightened market experience, the lurking fishy miasma and airtight humidity of the space were real.

“I wanted to have an environment which was very Asian,” Simons said after the show. “So I wanted to find a place that was definitely not a show space. I didn’t want to create the mood, I wanted it already to be there, not only physically but with its smell and noise.”

Simons’s obsession with Peter Saville’s graphic design goes way back. In 2003, Simons presented his iconic Closer collection, which sampled Joy Division’s imagery on everything from knit sweaters to canvas parkas and motorcycle jackets. And recently, he tapped Saville to redesign Calvin Klein’s logo.

For Simons’ Spring 2018 collection, Saville worked on the custom Chinese lanterns himself and had them printed with graphics taken from old Joy Division and New Order album covers of which the graphic designer originally created. They hung above the show-goers as glowing decorative ornaments, and also dangling on some of the models.

“What I like so much about Blade Runner is how all these cultures come together,” Simons said. The 50-piece collection was a melting pot of East-meets-West inspired by the dystopian world from the Ridley Scott flick.

Simons’ models each lugged umbrellas and an assortment of protective gear — boots, hats to headscarves in floral prints — perhaps an imagination of a not so distant future where we’d all be needing barricades from the elements. More than one model held glow-stick-handled umbrellas with coats decorated with a neon pin. Some of them wore shirts emblazoned with the word “Replicant” on the chest pocket, an explicit reference to the fictional, genetically engineered robots featured in the film.