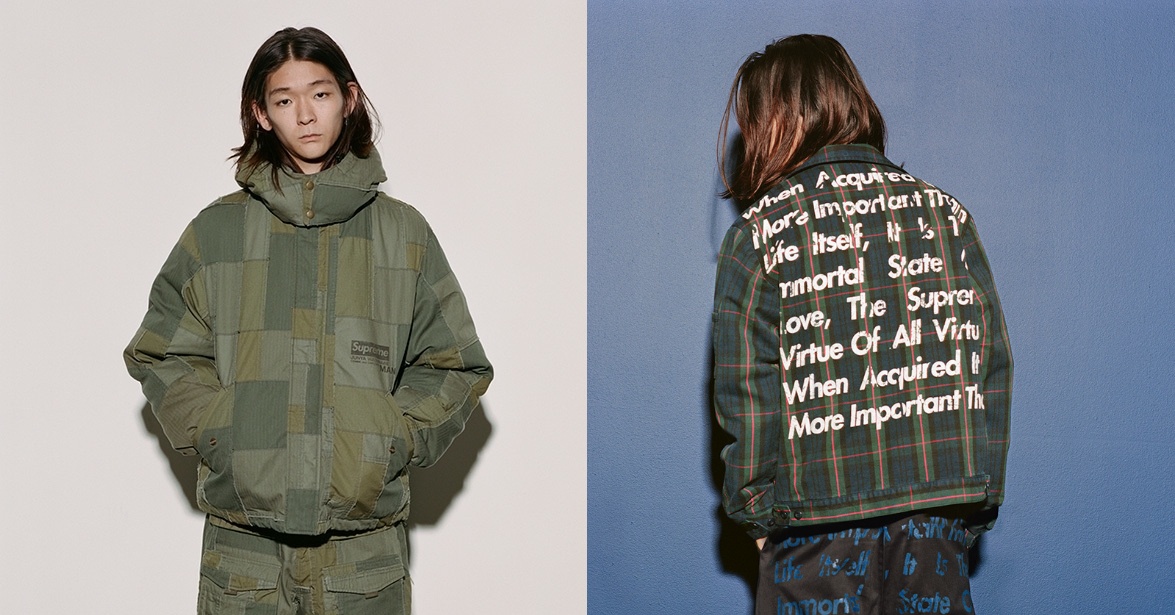 There may be plenty of contenders for the biggest luxury fashion collaboration of 2021, but if we’re talking streetwear, there’s really only one that matters: Supreme x Junya Watanabe.

Yes, it’s real, and it’s dropping this week. Nine years after its first collection with Comme des Garçons, Supreme has now tapped onto the former Rei Kawakubo protégé to be a part of its hype collaboration machine (which of late has included Timberland, The North Face, and allegedly even Tiffany & Co.).

For those unfamiliar, Junya Watanabe cut his teeth at Kawakubo’s CDG label in the 1980s. The Japanese designer would later launch his own women’s line in 1992, followed by a menswear one in 2001.

His clothes are imbued with an unmistakable punk attitude, whether in the form of patchwork designs, deconstructed tailoring, or everyday staples reworked with innovative and technical fabrics. (You’ll find plenty of those design codes in the Supreme x Junya Watanabe collection, which borrows heavily from the latter’s menswear archives.)

Like designers Raf Simons and Helmut Lang, Junya Watanabe is also widely collected by menswear obsessives (see: Junya Watanabe World). But the Supreme drop is going to draw even more shoppers: regular resellers of the American streetwear label on StockX, for one; followers of the cult of Kanye West, who dedicated an entire song to the designer on his DONDA album; and, finally, both their armies of bots.

Be ready to face them all when the Supreme x Junya Watanabe collection is released on Thursday, 4 November on Supreme’s website. Below, we highlight the grail-worthy pieces that are going to sell out first — and make big bucks on resale sites hours later.

Not only does this sweater reflect one of Watanabe’s biggest inspirations — military uniforms — but it also replicates the distressed knit turtlenecks from his Fall/Winter 2006 collection, albeit, minus the tatters.

Say hello to what just became the puffer jacket of the season. This one references Watanabe’s penchant for patchwork (he’s applied the DIY treatment to shirts, jeans, and even trench coats), but it’s also practical with its detachable hood. It comes in both military green or black, and forms a set with matching cargo pants.

You could go full camo with this limited-edition 34L backpack, which nods to the utilitarian quality of Watanabe’s creations. (Case in point: the designer has even released a liner jacket that comes with its own detachable backpack.) The bag is also available in black if you’d rather go incognito.

Besides military motifs, lines of poems are another Junya Watanabe signature. The designer has printed his philosophical musings in block letters across shirts and jeans, which are now highly sought after by collectors. This trio of jackets are made even special by the fact that they combine Watanabe’s poetry (printed in the recognisable Supreme font) with his professed “love of workwear and the American tradition.”

Speaking of American traditions, this peacoat celebrates it with its use of Schott leather — that is, leather made by Schott NYC, the 108-year-old brand behind the world’s first leather jacket. Schott’s jackets have been worn by icons like Marlon Brando and James Dean, but you can expect to see this one on rappers like Kanye West and A$AP Rocky.

Junya Watanabe’s experiments with fabrications puts him miles ahead of other brands, which are only now embracing GORE-TEX technology. For perspective, the Japanese designer has been offering waterproof and windproof outerwear pieces made of GORE-TEX fabrics all the way back in 2005. Over a decade later, Supreme is launching two new styles that feature the designer’s poetry.

Balenciaga’s latest Objects collectible is perfect for the new year