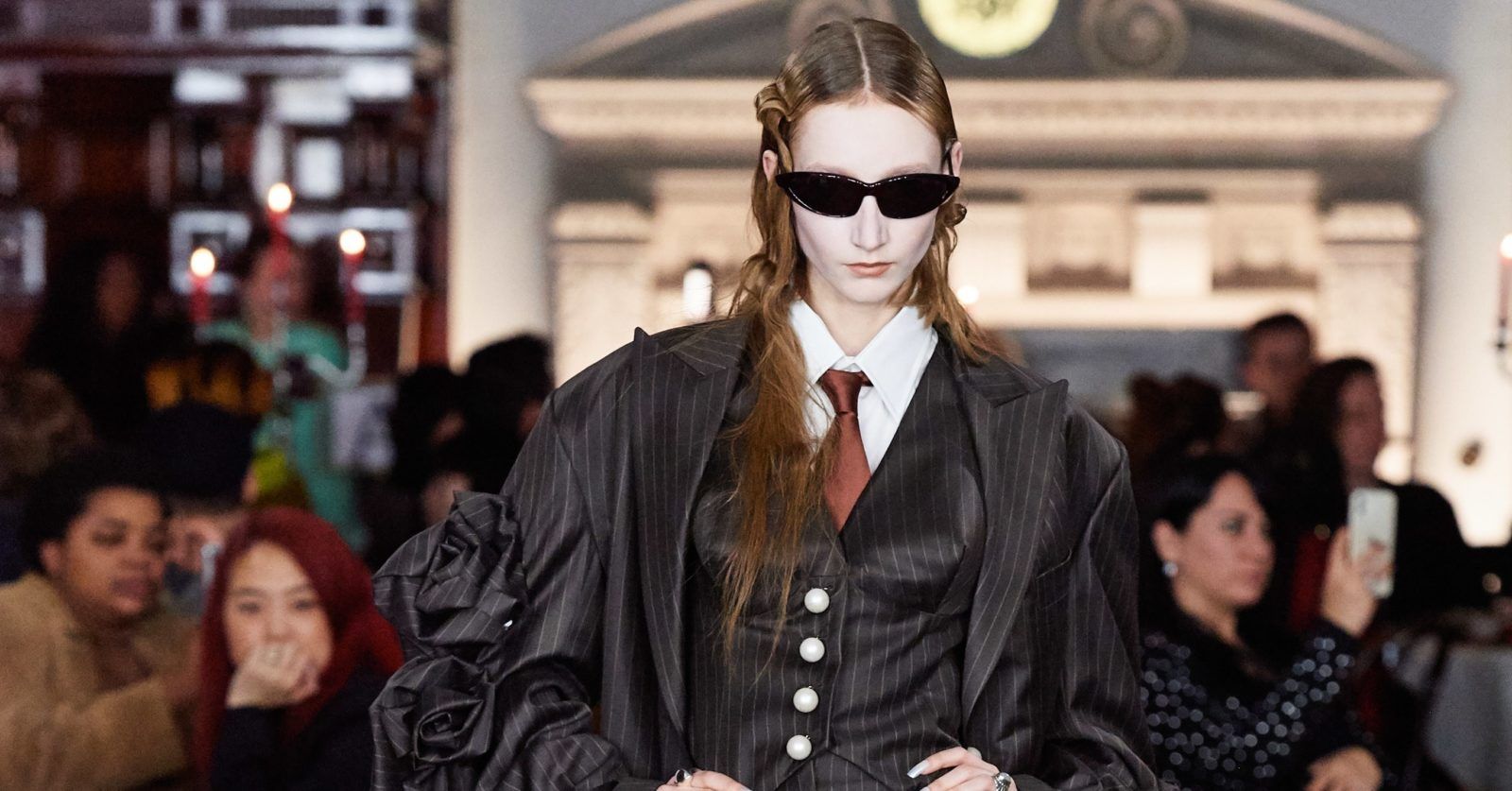 Why 2020 is the year women wear ties better than men

When Miuccia Prada unveiled her Fall/Winter 2020 collection in Milan, she did so, as always, with brilliant prescience.

That’s not because Mrs. Prada had in mind the same powerful woman that brands like Dior and Fendi were designing for next season. Neither was it because she showed a collection that was fabulously trimmed with fringe, a major F/W 2020 trend that crossed borders across runways from Givenchy to Bottega Veneta. Instead, it was because her models wore ties. Lots of them.

They were impossible to miss; in bright shades like red, blue and pink, ties hung smartly from pointed collars and were tucked into vests and jackets. And their presence felt so radical. When was the last time you saw a tie in a womenswear show?

The F/W 2020 runway shows certainly fixed that. Dior, Chanel and Gucci all joined Prada in adapting the menswear staple for ladies — and making it look so much better.

Borrowing from the boys is nothing new in the world of women’s fashion. One famous instance was when Yves Saint Laurent changed women’s eveningwear forever with his iconic Le Smoking suit, inspired by the gentleman’s tuxedo. Today, the line between genders continues to be blurred, and coinciding with it is the rise of unisex dressing. (We can thank Alessandro Michele for bringing androgynous fashion to the modern mainstream. Who else could get a rockstar like Harry Styles to wear pearls and Mary Janes?)

With women’s closets now brimming with boxy blazers, classic white button-down shirts, and garments in traditional menswear fabrics like checks and pinstripes, it was only a matter of time before the necktie was added to that list. And for F/W 2020, there were as many ties as there were ways to wear them.

The most obvious way was through power-dressing. The tie was the centre of F/W 2020’s version of Executive Chic, framed by unexpected lapel and collar shapes as seen at Prada and Preen by Thornton. For the rest of the boardroom-ready look, designers emphasised a strong silhouette with the help of oversized jackets with padded shoulders, while alluding to their menswear inspirations with the use of checks and pinstripes.

Not that you need a blazer to pull off the trend. In fact, Prada also highlighted how well the tie works with puffer jackets (very Moncler) and shearling-trimmed coats. Luxury streetwear label Alyx probably had the coolest take of the season, pairing a skinny leather tie with a matching leather jacket — a look modelled, no less, by It-girl Bella Hadid.

The necktie is traditionally meant to smarten up an outfit, but some brands used it to exude insouciance instead. Avril Lavigne made the case for it two decades ago, but in 2020 it was British label Margaret Howell that styled ties loosely around collars. It instantly gave models an air of nonchalance despite their sharp ensemble. On the runways of Rokh and Moohong, models were indifferent to the length of their ties not matching up right — a styling trick perfect for those of us who never bothered to learn how to tie a tie.

To really mix things up, brands like Dior and Chanel sent models down in looks that married the masculine with the feminine. Ties were layered with sheer blouses and lace jackets, or paired with a miniskirt, creating a preppy look. Prada presented the grown-up version with its sweeping carwash skirts, and ties tucked neatly into fringed waistcoats. (As it happens, the waistcoat is yet another surprising menswear staple that dominated the runways for Fall.)

But why tuck a tie in when you can show it off? You certainly should if it comes in the rich patterns that were presented at Gucci and Emilio Pucci. As brands showed us this season, the tie is the easiest way to introduce colour, prints and unexpected fabrics into an otherwise monotonous outfit.