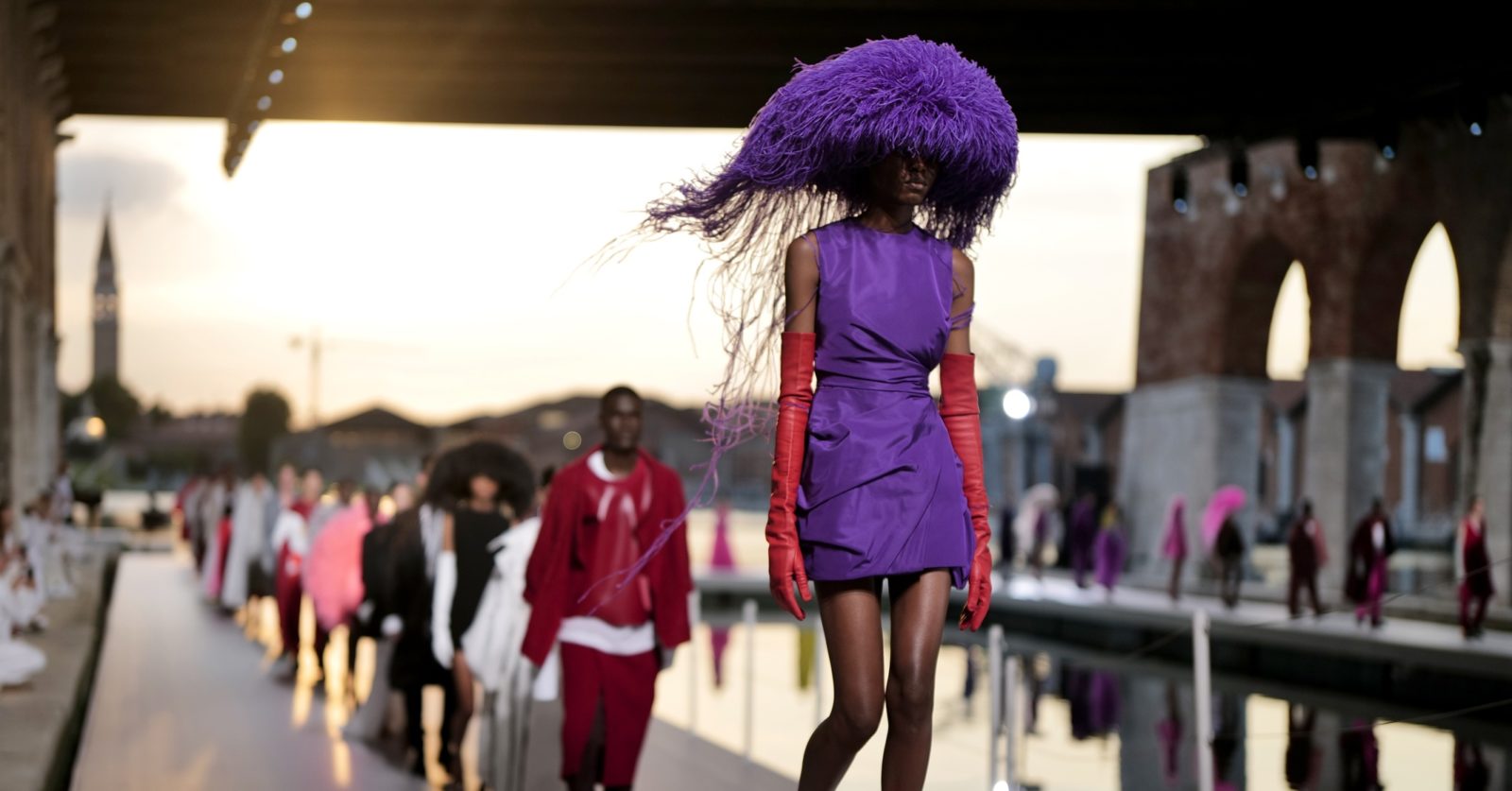 Paris Couture Week may be over, but Valentino still brought us the magic of haute couture at its latest presentation.

Instead of heading to Paris, or Rome like it did last season, the Italian luxury fashion brand chose the scenic city of Venice to showcase its Fall/Winter 2021 haute couture collection, entitled “Valentino Des Ateliers”.

On Instagram, creative director Pierpaolo Piccioli shared that Venice “[is] the place where I ‘saw’ the final picture of this collection from the beginning, the natural environment for this project, and the perfect final frame to conclude this journey and to celebrate a new beginning.”

That final picture turned out to be a sublime one, involving a colourful bouquet of blooming ballgowns seemingly floating above the water, all while the sun set and London singer Cosima offered her rendition of What the World Needs Now to the audience.

Below, we dive into the details of Valentino’s beautiful couture presentation.

The fashion show was held at the Gaggiandre

This season, Valentino docked at the Gaggiandre shipyards, which are known for their size, their significance — they’re part of Arsenale, one of Venice’s bustling production centres — and sense of history. They were built between 1568 and 1573 by Renaissance architect Jacopo Sansovino, who gave the place its charm with its soaring arches and stately columns. But it is the Gaggiandre’s close proximity to the waters that made the Valentino fashion show all the more magnificent, giving it the illusion of floating above the water. For its part, Valentino did little to embellish the space, choosing instead to leave it as is as part of its homage to the city of Venice.

Valentino established a collaboration with artists

Venice is buoyed by a rich cultural heritage that encompasses art, theatre, music, architecture and cinema. Designer Pierpaolo Piccioli chose to honour that heritage by inviting a community of contemporary artists from around the world to collaborate with Maison Valentino. Of the 82 designs that were shown on the runway, 22 of them featured the works of those artists, including a ballgown that was graced by the abstract paintings of Patricia Treib, and a sequinned slip dress and taffeta bouillonné cape that had echoes of the images by Chinese photographer Rui Wu. “Fashion is not ‘art’, because the latter has no purpose outside of itself, while the first always has a practical scope, a function, a use,” shared Piccioli. With his latest collection, he brought the two together.

There were men’s looks, too

Haute couture has traditionally been made for women, but as times change so do those traditions. Valentino first unveiled its couture ensembles for men last season, some of which were later spotted at the Golden Globes red carpet. This season, the Italian brand offered up sequinned sweaters and T-shirts, elegant leather gloves in green and purple, and equally colourful cashmere capes to drape over the relaxed yet artisanal menswear pieces. Once again, Piccioli drove home the message that he expressed last season: “Couture is for people. I don’t care about gendered (fashion). It’s an inspiration which is fluid, no-boundaries.”

The ballgowns stole the show

The show saved the best for last, closing with grand ballgowns in vibrant colours that have come to be associated with Valentino: scarlet red, flamingo pink, lime green, dandelion yellow and more. The line-up formed a Insta-worthy rainbow along the runway at the Gaggiandre. One particular showstopping look was a white and red gown worn with a cape, both covered in artist Jamie Nares’ striking brush strokes. It was shown right next to a sleeveless gown made of Valentino’s signature red archival fabric, embellished with an allover pattern of hands created by artist Alessandro Teoldi that symbolised “intimacy at a time when you can’t really touch anything.”

Guests were expected to wear white

By contrast, the front row remained neutral: guests were told to dress in white. That included those on the virtual front row. Celebrities like Emma Roberts, Zoey Deutch, Janet Mock and Pose star Mj Rodriguez took to Instagram to show their support for the fashion show, all wearing Valentino Uomo white button-up shirts paired with versions of the Valentino Garavani Alcove Top Handle Box bag and Alcove pumps. Of course, their palette-cleansing ensembles only underscored the beauty of the Valentino haute couture show.