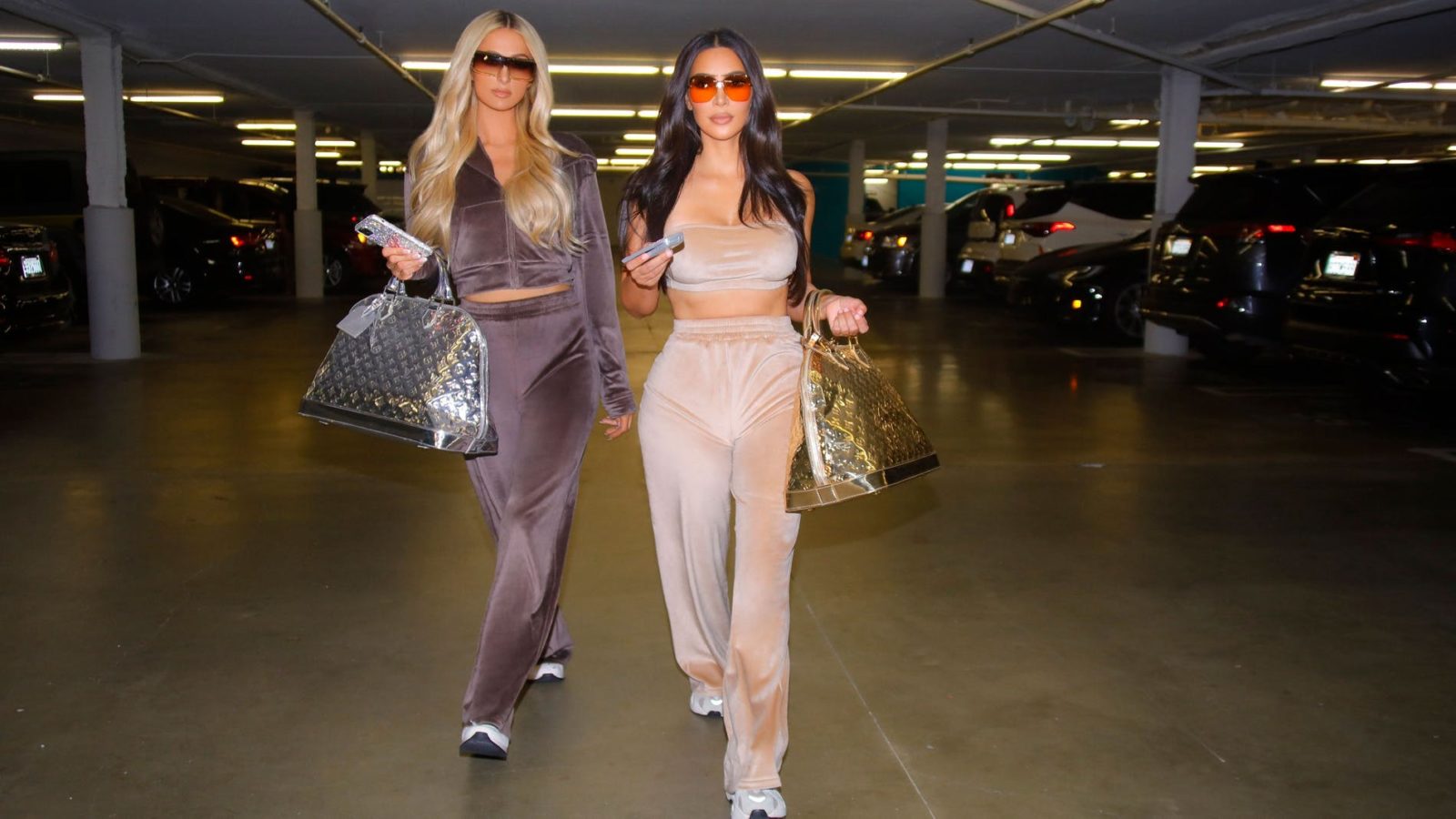 Style
Velour tracksuits are back: How the ’00s trend has evolved since Juicy Couture
Share this article
Next article

Velour is back with a vengeance.

That’s the message we got from the new photos of Kim Kardashian and Paris Hilton strolling around Los Angeles, clad in tracksuits made with the plush fabric. It’s like they came straight out of the 2000s.

You may also like…
Style
Off-White launches Off Active, an activewear line for you to flex at the gym
Style
Puma x Von Dutch is bringing the 2000s back with a new athleisure collection

But it’s 2020, and those tracksuits aren’t Juicy Couture, whose bedazzled, baby pink jogger sets were the go-to ensemble for celebrities like Nicole Richie, Britney Spears, Jennifer Lopez and, of course, newly reunited BFFs Kim and Paris. Instead, they’re part of the new Velour collection from SKIMS, Kim’s loungewear and shapewear line.

Besides Kim’s inescapable influence on fashion trends, there are plenty of reasons to believe that the velour track is back. In fact, if you’ve been paying attention, you may have spotted it on the runways in the last couple of years.

Vetements actually collaborated with Juicy Couture in 2016, while then-creative director Demna Gvasalia would go on to add rhinestone-less sets to his Balenciaga collections. Gucci, too, has offered various monogrammed velour tracksuits, although designer Alessandro Michele may have been compelled to revive the 2000s silhouette more so because of Wes Anderson than Pamela Anderson.

Even outside the runway, the allure of velour could be felt. Rihanna has sported both vintage styles from celebrity brands (hip-hop stars used to sell their own tracksuits) and those from her Fenty x Puma collaboration. Likewise, modern-day It-girls like Kylie Jenner and Bella Hadid have incorporated head-to-toe velour in their street style.

And just this year, Kimora Lee Simmons relaunched her fashion label Baby Phat, along with an array of its iconic velour styles that served as the blueprint (or should we say pinkprint?) for Juicy Couture. Unsurprisingly, it sold out pretty quickly.

It’s worth noting that the velour tracksuit, once the uniform of the rich and famous, takes on a different meaning today. As Kim describes, “It’s the perfect blend of 2000s nostalgia and present-day loungewear.” Indeed, we have felt that nostalgia everywhere, through the return of bandanas, baguette handbags and even Von Dutch hats.

But the tracksuit is also perfect for our pandemic-prescribed lifestyles — our new Simple Life — which includes working from home, making the occasional grocery run, or heading to the gym. It’s the apex of athleisure, which has defined the last decade and ruled our shopping decisions for the last six months — and counting.

Kim’s velour tracksuits are dropping this week, but you can stay ahead of the curve and shop these similarly luxe, laid-back styles below. 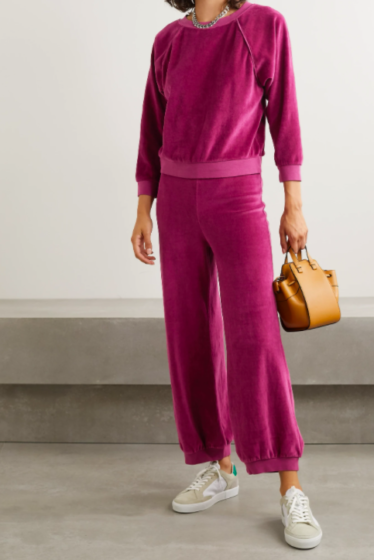 If you’re committing to velour for good, you’ll have to keep Suzie Kondi in mind. The New York label took years to create the perfect tracksuit, updating the classic style with a high waist, flared ankles and a modern colour palette. Their pieces — like this magenta sweatshirt, which comes with matching pants — are just the right balance of stylish and casual. 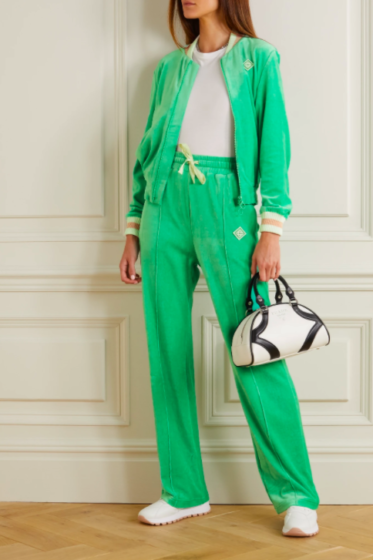 If you don’t mind a little colour, Casablanca’s plush pants will certainly inject a dose of it into your wardrobe. You can also style the bright green joggers with a matching bomber jacket for maximum impact. Just make sure to keep the rest of your outfit clean and simple. 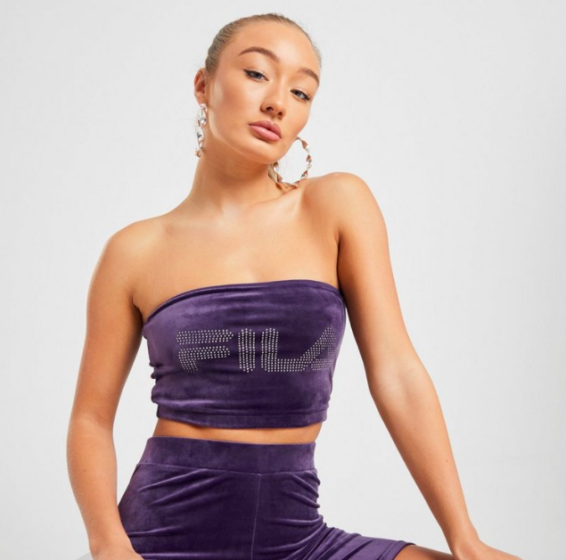 Velour bandeau tops weren’t exactly a thing in the 2000s, but they are going to be pretty popular now given that Paris Hilton and Kim Kardashian have sported them. If you appreciate a nostalgic touch, this Fila top even comes with a smattering of rhinestones that hark back to Juicy Couture’s brazen branding. 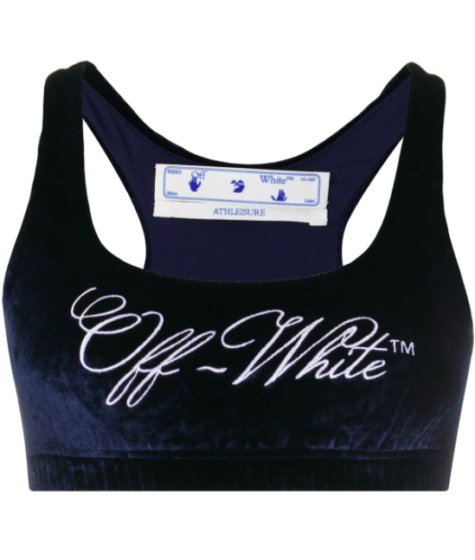 Another new velour silhouette? The sports bra, here in a flattering navy blue hue and embroidered with the Off-White logo. You can even complete the gym-ready outfit with the brand’s matching jacket and high-waisted track pants. 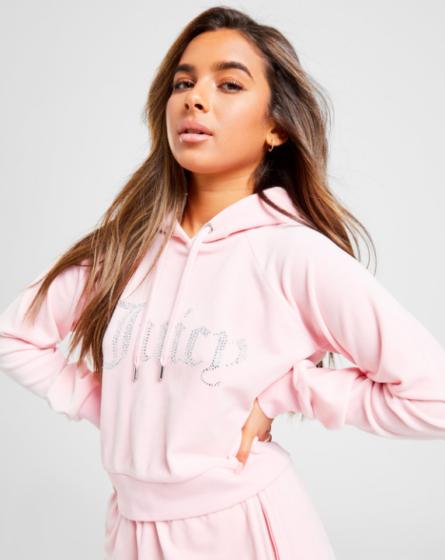 Of course, you can always just go back to originators of the trend: Juicy Couture, revived with a fresh new look. Their sparkling “JUICY” branding is now placed front and centre too, instead of solely upon a wearer’s derrière. This baby pink hoodie is as 2000s as you can possibly get. New York label N Natori has been making velour loungewear for years, but they’re more appreciated now than ever before. This pair of plush pants feels especially contemporary with its neutral hue, and can easily be styled with an oversized, minimal sweater to create an elegant, relaxed ensemble. 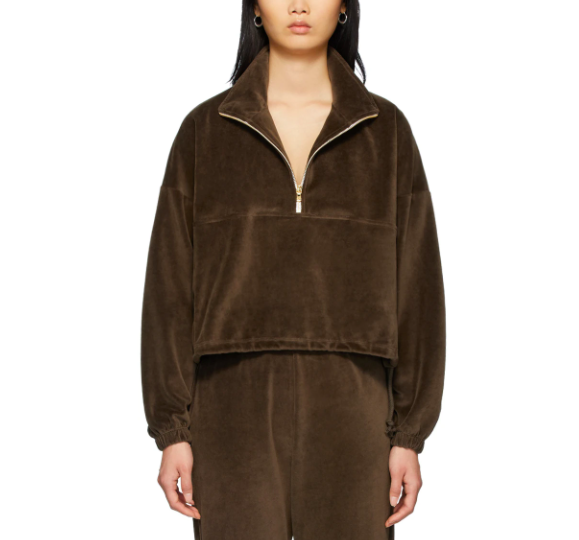 If you’re not a fan of the fitted tracksuit look, opt for this zipped sweatshirt from L.A. label Gil Rodriguez. It comes with a boxy cut — great for both girls and guys — that you can easily pull over.