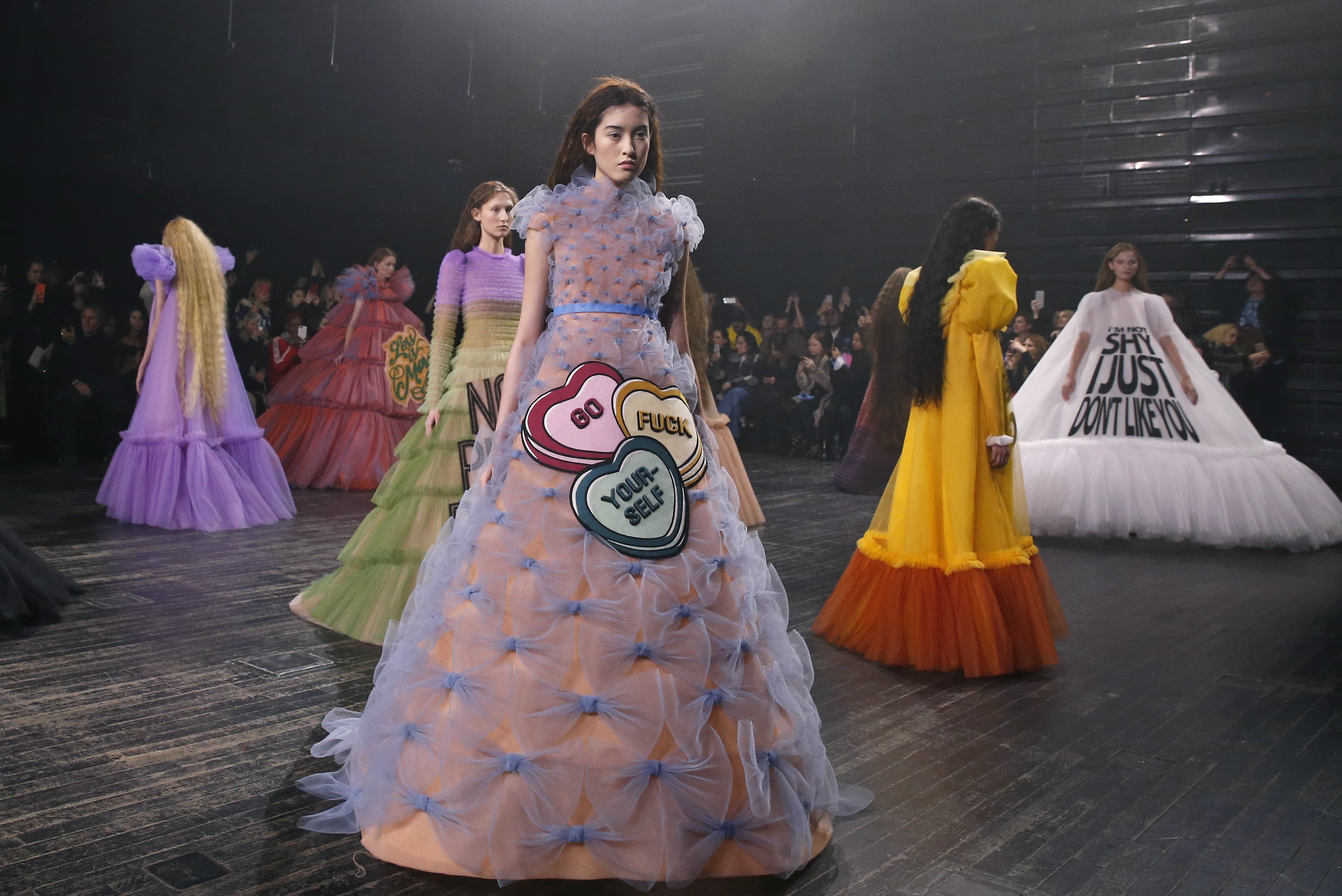 It’s hard for common folk like you and me to fully comprehend haute couture at times, but two men have really made the divide air-tight at this year’s Couture Spring 2019.

Today’s martyrs-of-the-day are Viktor Horsting and Rolf Snoeren, both of whom have decided to give pretentiousness the middle finger by serving up a runway full of realness at the Couture Spring 2019 show.

The dresses are what you’d expect to see at any haute couture show: A rainbow parade of tulle-based dresses, each period-referenced and then supersized to exaggerated proportions for good measure. Yet amidst the 34-piece collection of mutton sleeves, excessive ruffles and labour-intensive pleats were also 34 damn relatable phrases and graphics that really put the psychedelic chaos into perspective.

Was it enough to make us forget Chanel’s bridal swimsuit or Dior’s troop of escaramuzas? Why, yes it was. Our meme-hungry appetites took a bite of that yellow “Go to Hell” dress and never let go — flaming skull and all.

The duo’s memorable “bed-dress” from 2005 — which, to this day still lurks within the depths of social media — will be succeeded by that massive “NO” gown that’ll forever be the best passive-aggressive way of turning down the after-work party you never asked for. If at this point you’re still interested in technicalities, the entire collection was crafted from eight kilometres of tulle.

Other witticisms included “I’m Not Shy, I Just Don’t Like You” on a gargantuan white gown, rendered in Star Wars’ prologue style, as well “F* This I’m Going to Paris” on a sorbet-hued tiered dress.

For those in need of a little pick-me-up, the “I Am My Own Muse” dress is a wearable life coach, while “I Want a Better World” would really upgrade your wallflower status to outspoken political opinionator in no time at all.

Also, nothing says ironic more than the “No Photos Please” dress, of which we’re guaranteed to see on nary a few attention-seeking influencers come fashion week.

“It’s the kind of message you find on social media, with the same instant feeling,” Snoeren mused. “All these statements that are so obvious or easy — there’s a lot of banality on Instagram and social media in general — are counterbalanced with this over-the-top, shimmery, romantic feeling.”

Did the slogans and symbols (we’re looking at you, weed leaf) take away anything from Viktor & Rolf’s ingenuity and over-the-top approach to haute couture? No, it didn’t. If anything, it was a blatant display of the sign of our times, and an unadulterated exploration of the internet’s influence on fashion and femininity today.

A haute couture garment is defined as being made for an individual client, tailored specifically for the wearer’s measurements and body stance. In this case, Viktor & Rolf tailored their collection to an entire generation.

Scroll down to see the rest of the collection. 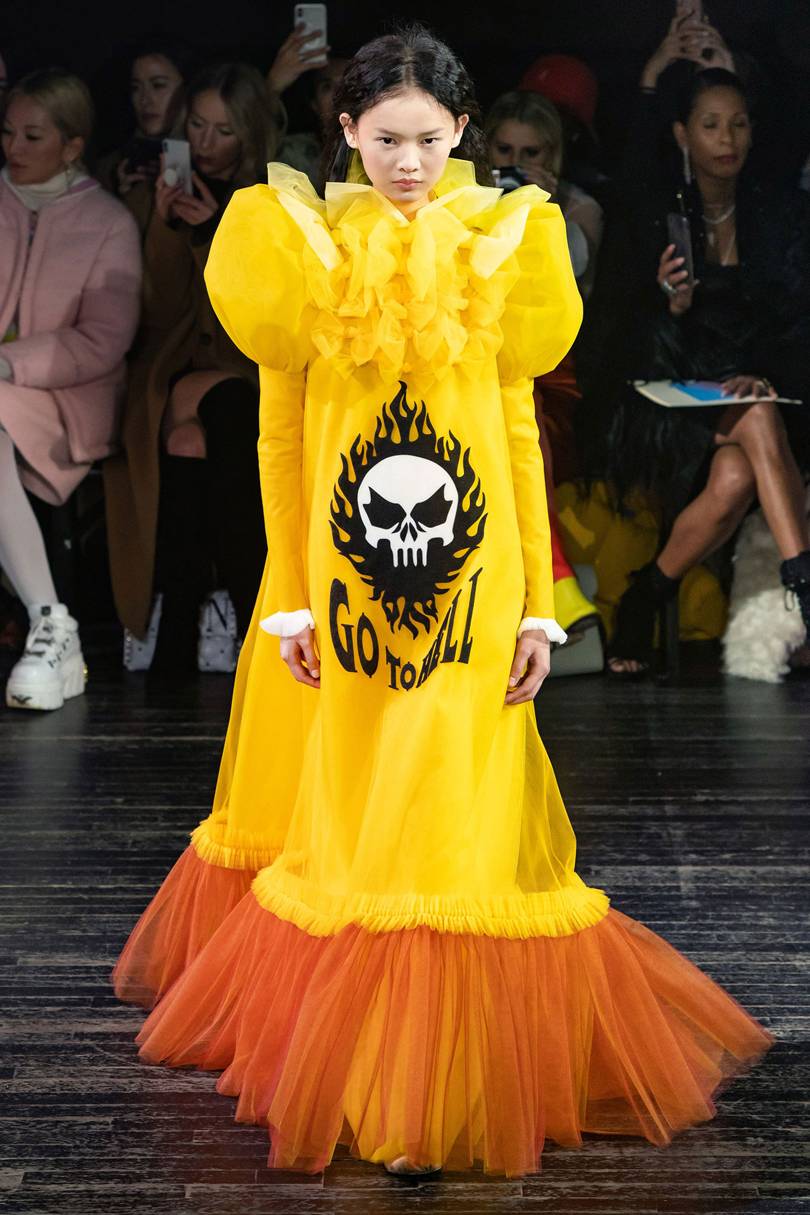 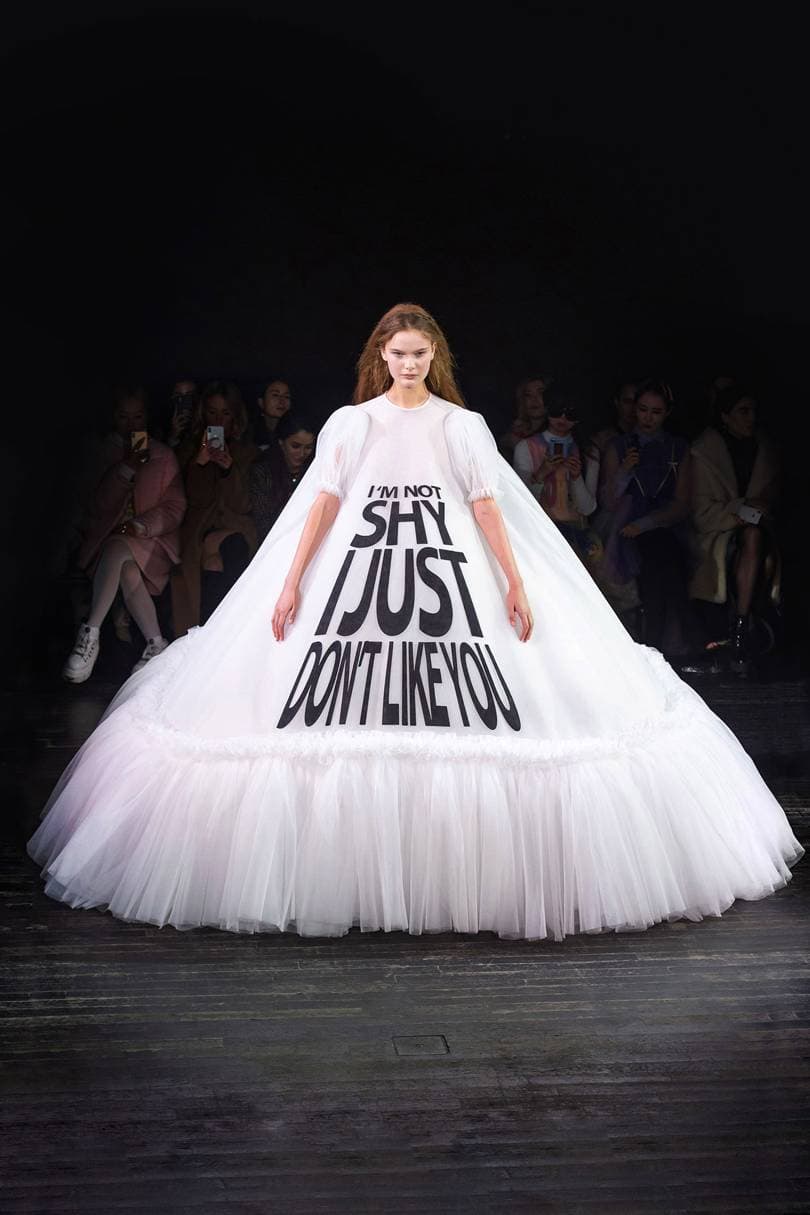 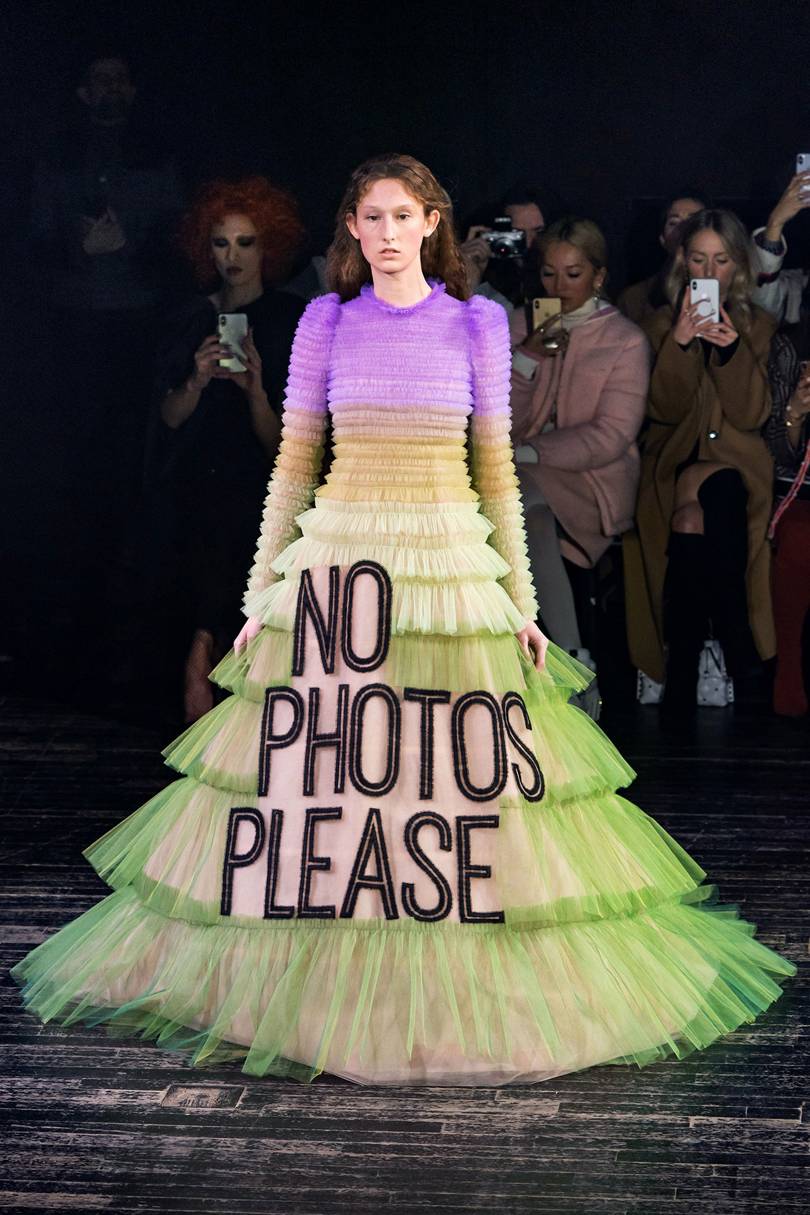 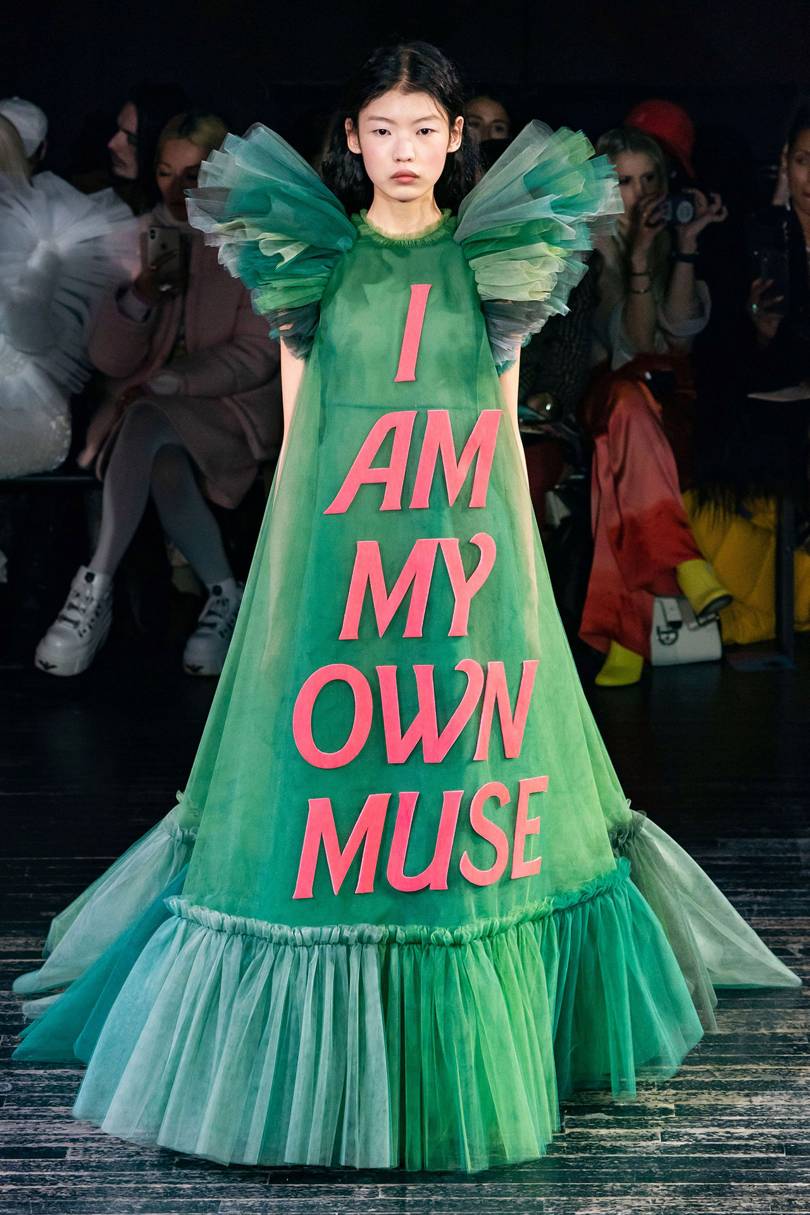 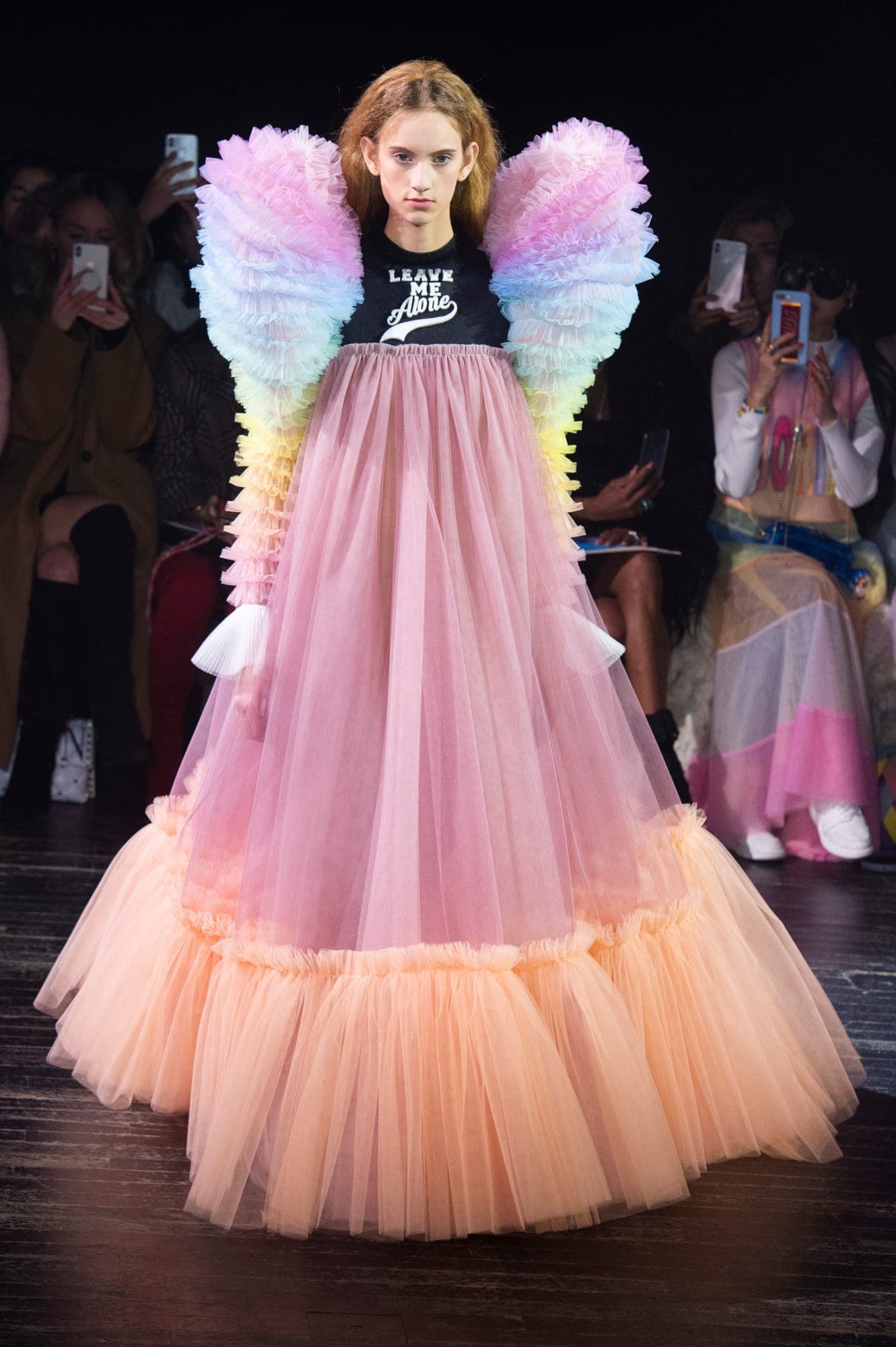 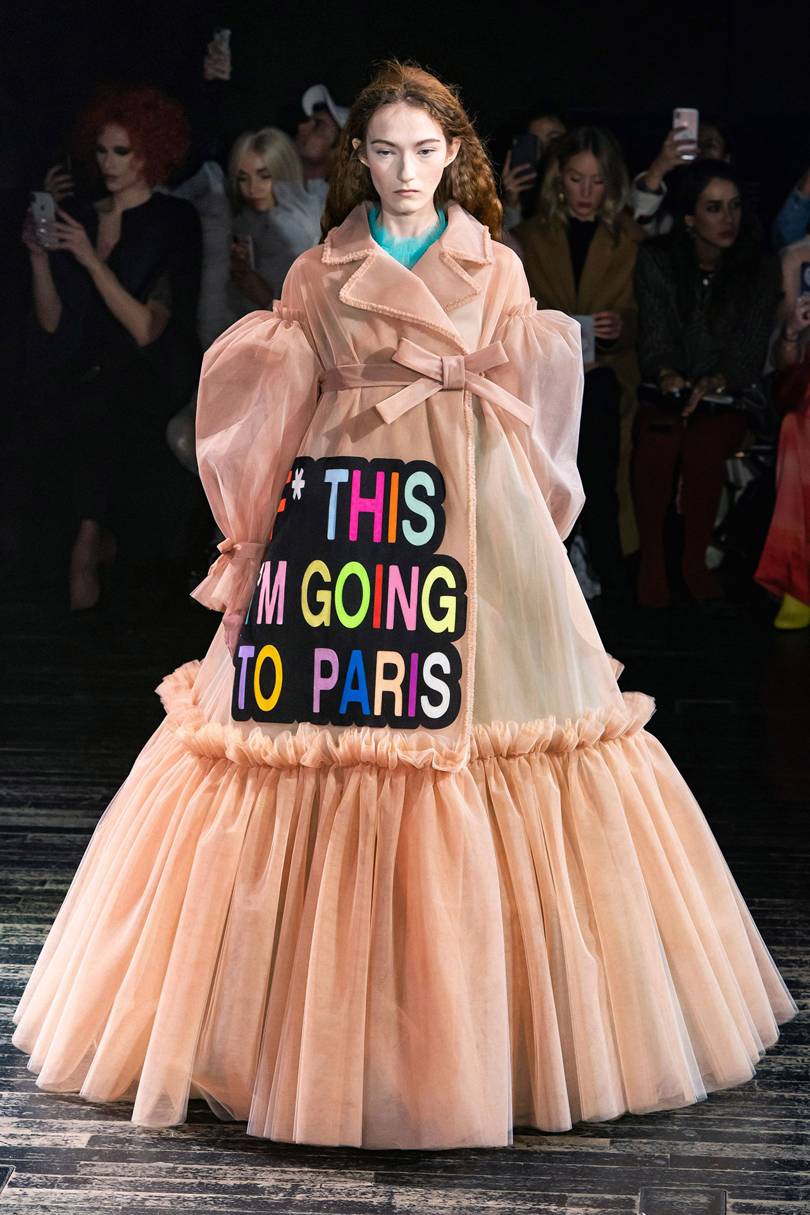 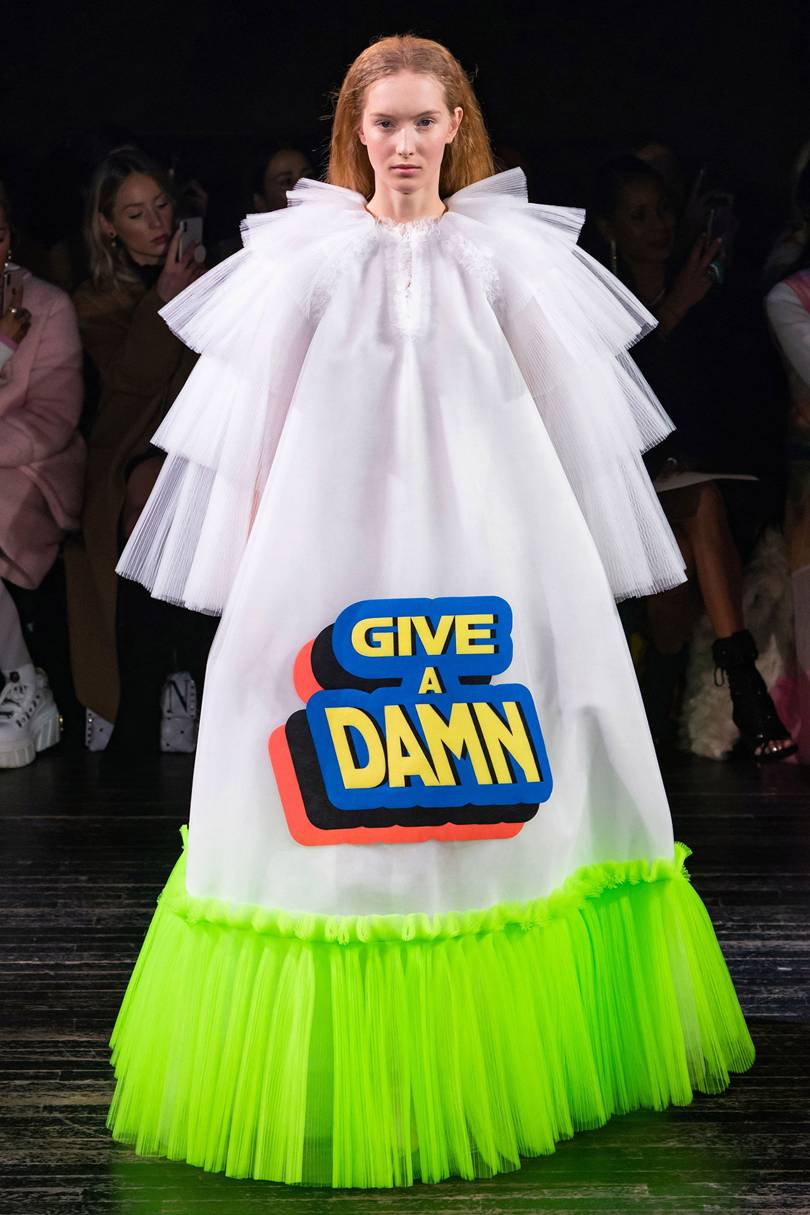