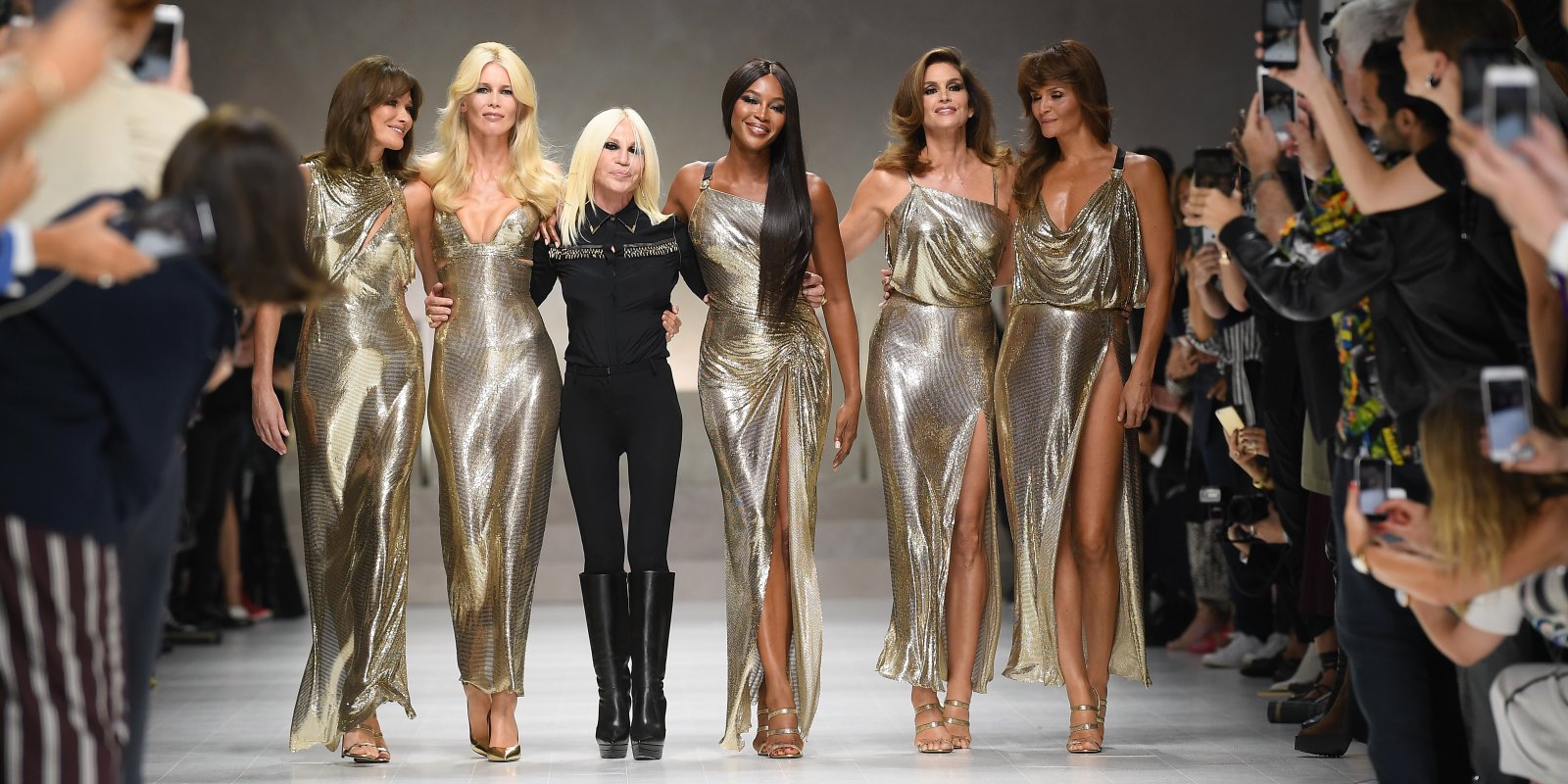 Zendaya’s look was simple: a slinky slip dress, shimmering with a beaded bodice, that hugged her body perfectly.

It was a Versace design, that much is clear, but not from Fall/Winter 2020. Instead, the actress chose to wear a dress from 1996, the year she was born, to the Green Carpet Fashion Awards this month. Kate Moss and Carla Bruni respectively modelled the purple and red versions 24 years ago, while Naomi Campbell has worn the yellow.

You may also like…
Style
How the supermodel era of the ’90s shaped fashion forever
Style
Pagoda shoulders: behind the bold trend that Balenciaga and Balmain are bringing back

But Zendaya is not the only one who has been reviving vintage Versace looks lately: Dua Lipa wore a crystal mesh mini dress from the brand’s 1997 couture collection in her new music video, Levitating, while Kylie Jenner recently showed off a blush pink version.

What all these archival pieces have in common is how appealing they seem even today, as though Gianni Versace had been looking into a crystal ball when he designed them so many years ago. What’s even more intriguing is that celebrities are embracing the late Italian designer’s brand of high-octane glamour now, when it’s hardly a time for partying or getting all dressed up. So why do they feel so right for the moment?

Believe it or not, you’ll find the answer in music — Gianni Versace’s other great love besides fashion. Despite the fact that nightclubs remain closed and concerts are deemed as dangerous in most parts of the world, artists have been releasing music made for us to dance.

“Quarantine Queen” Dua Lipa, for example, has soundtracked the pandemic with Future Nostalgia, an album of disco-pop bangers. It remained at the top of countless music charts for weeks. The uptempo genre could even be enjoyed in Doja Cat’s viral TikTok hit “Say So”, BTS’ first English single, “Dynamite”, and Lady Gaga’s award-winning Chromatica record. Kylie Minogue, the OG queen of dance-pop, is even making her comeback this year with an album called “Disco”.

If energetic dance anthems make up 2020’s sound, then the year’s look should be just as vibrant. Versace’s dresses fit the bill perfectly, whether it’s a glammed-up minidress, or a sparkling slip dress with a seductive slit. The Italian brand’s decadent designs — both old and new — offer a sense of fantasy and escapism in their own way, much like the music that we’ve been bestowed with all throughout the year. In fact, escapism was at the heart of Donatella’s Spring/Summer 2021 show, for which she envisioned an underwater utopia.

“While we dream of a world that is a better place for everyone, we need to start building it,” shared the designer. “I also wanted to dream and that is the reason why the collection is so full of colours and has such an upbeat soul.”

Those ideas are embedded in Versace’s DNA. “What women need today,” said Gianni decades ago, “is classic things with an age, with fantasy, with a quality.” So he gave us dresses with bold, baroque prints all over them, bondage-inspired bodycon dresses and golden chain-mail gowns fit for a goddess — all of which naturally capture our imagination today, especially after months of being fashion-starved and lounging about in sweatpants and other basic, boring clothing.

The age of vintage

Vintage Versace doesn’t just appeal to us now because of escapism. Quite the opposite: vintage fashion in general is experiencing a renaissance, thanks to the rise of an eco-conscious mindset amongst shoppers, and the presence of resale platforms like Depop and Vestiaire Collective that encourage it.

Zendaya’s Green Carpet Fashion Awards look isn’t just a tribute to ’90s supermodels, as her stylist Law Roach shared, but also a statement on sustainability. “We’re all thinking about… what’s best for the planet,” said Roach.

Another celebrity who has been championing the cause is Kim Kardashian, who has revived countless styles from the Italian brand’s ’90s runway shows — including one for her Met Gala look. If there’s anyone to blame for how much more competitive — and costlier — it has become to snag rare, seasons-old designer fashion pieces, it’s the mega Instagram influencer.

But let’s not forget how much Donatella Versace herself has been bringing back her family brand’s past designs, from Jennifer Lopez’s Internet-breaking jungle print dress to Elizabeth Hurley’s risqué safety pin LBD. Even her latest collection is filled with throwback looks from her brother’s S/S 1992 collection.

Few luxury fashion houses have stuck to its roots as much as Versace has. While fashion is always anticipating future trends, Donatella has often chosen to reinterpret the old and make them feel not quite new, but timeless. As fashion writer Plum Skyes once put it: “Versace’s dresses are a triumph of modern taste and classic construction.”

It’s that winning combination that makes Versace’s designs maintain their allure years after they first appeared on the catwalk, even after the world has shifted dramatically from the era of hedonistic excess and glamour that defined Gianni’s heyday. They could dress the supermodels of the past just as well as they do the celebrities of today. In other words, they’re what one could rightly call “iconic”.