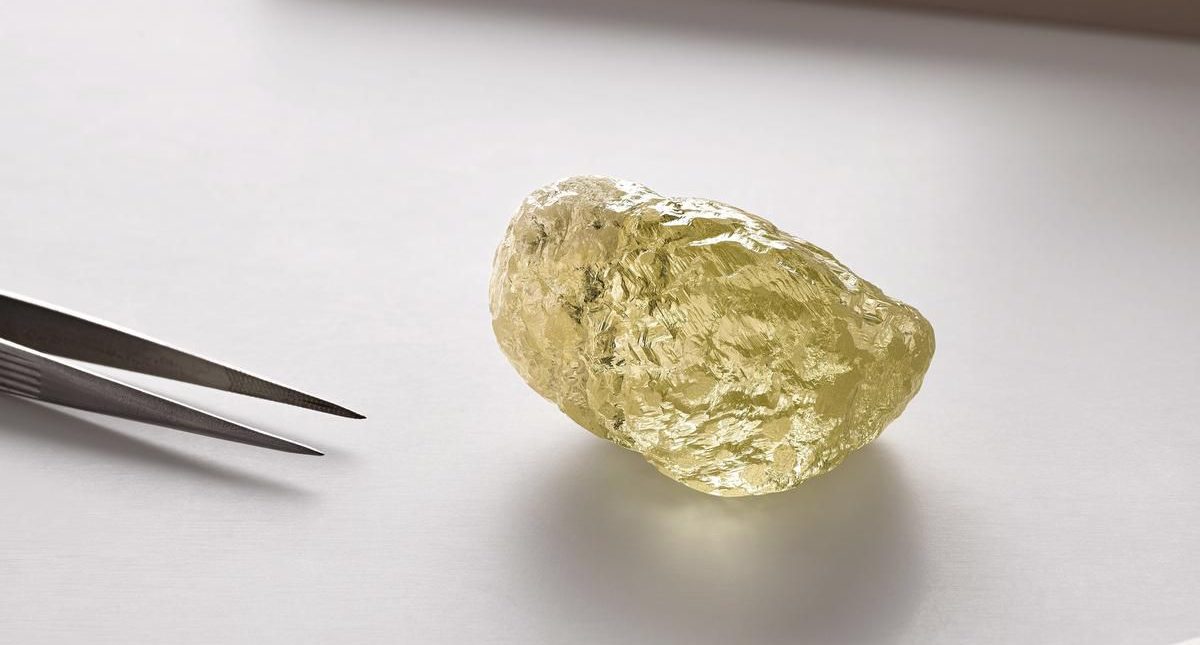 Here is a Christmas miracle for jewellery collectors and auctioneers to dream about: A large yellow diamond the size of a chicken egg has been discovered in Canada‘s Diavik Diamond Mine. For context, such large diamonds are extremely uncommon, as are coloured ones, making this an exceedingly rare find.

The gem had not escaped the clutches of the earth unscathed, however. Its surface sports abrasion markings, or battle scars Dominion Diamond Mines had to take on during the difficult recovery process.

The effort was all worthwhile. The gem has now set a record for being North America’s largest natural diamond ever found. It trumps a previous record set by the Diavik Foxfire, a 187.7-carat faint yellow diamond unearthed from the same mine. Measuring 33.7mm by 54.7mm, the diamond has been compared to that of a chicken egg. It is also the seventh biggest diamond discovered this century.

While diamonds are mostly colourless (read: white), impurities can create a variety of colours. Such coloured stones are often rare and highly prized. In this case, the presence of nitrogen gas during the crystallisation of carbon lends a yellow hue.

Such gems are popular alternatives to white diamonds ever since Tiffany and Co. acquired the 128-carat Tiffany Yellow Diamond way back in 1879,  Yellow diamonds have also resurfaced again recently with the upcoming auction of the Moon of Baroda necklace, featuring at 24.04-carat fancy yellow diamond.

While its size and colour makes the ‘astonishing gemstone’ an extremely rare find, what is more surprising is finding it in a Canadian mine some 135 miles south of the Arctic Circle.

Style
Big, bold and beautiful: 5 of the world’s largest gemstones

A majority of the world’s largest gems are found in Africa due to a high occurrence of volcanic pipes. The North American region has significantly lesser, but the recent unexpected find has birthed hope for similar or more significant finds.

The diamond will not be sold in its original rough form. Instead, Dominion Diamond Mines will be getting the stone cut and polished to ensure that the stone’s beauty, colour, and brilliance meets its full potential.

Previously, the largest found at the Diavik Diamond Mines was this faint yellow diamond, the 187.7-carat Diavik Foxfire

It is likely that the stone will yield smaller, yet significant cuts to be set in some magnificent pieces. The diamond’s value has yet to be determined, but it will certainly be a hot ticket item in auctions.

Yellow Diamond Largest Diamond
Jasmine Tay
Senior Writer
Jasmine Tay is the dining, culture and jewellery writer. She makes fine silver jewellery and causes mini-explosions in the kitchen when she can't afford fancy dinners. Sometimes she tells people what she thinks about art, and binges on the music of Danzig when they don’t agree.
Dining Culture Jewellery