Home > Style > Jewellery > Why turquoise, one of the world’s oldest gems, will never go out of style 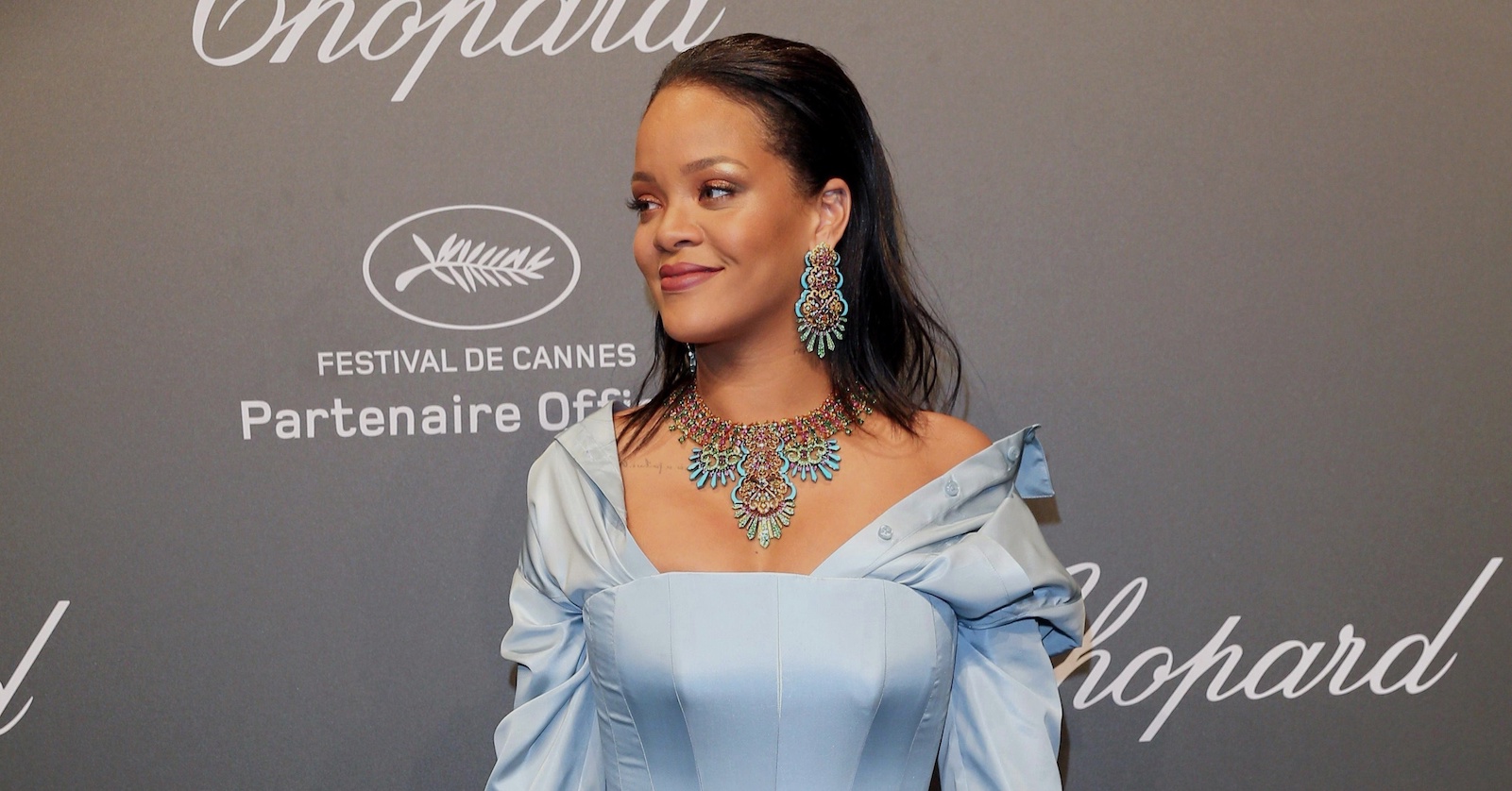 Why turquoise, one of the world’s oldest gems, will never go out of style

Style
Why turquoise, one of the world’s oldest gems, will never go out of style
Share this article
Next article

Long before the marketing tagline “diamonds are forever” became conventional wisdom, the turquoise had already earned an equally powerful reputation.

The December birthstone, which happens to be one of the oldest stones known to man, was favoured by the ancient Egyptians. Their Pharaohs proudly adorned themselves with the gem as a form of protection, even in the afterlife.

You may also like…
Style
All you need to know about topaz, the powerful November birthstone
Style
Why the tourmaline, October’s birthstone, is the gem that can appeal to everyone

In Persia, the sky blue stones that were mined in the copper-rich mountains of the Khorasan Province (now a part of northeastern Iran) became the most precious kind in the world; they represented the heavens across mosaics in the domes of Persian palaces and mosques.

The western world embraced the stone just as much as the East. By the time the gem made its way to Europe, it went by “turquie” — French for “Turkish”, named after the people who traded them.

The English writer Jane Austen famously owned only three pieces of jewellery, two of which were made with the gem. She was ahead of her time, in terms of taste; two decades later, Queen Victoria would give each of her bridesmaids a bird-shaped brooch made of turquoise, sparking a bridal jewellery trend in the 19th century.

It was around this time that Charles Lewis Tiffany first encountered those jewels in robin’s-egg blue, a colour that he trademarked as “Tiffany Blue” for his namesake jewellery empire in New York.

He wasn’t the first American to be enamoured by the stone, though. Like the Egyptians, Native American tribes had used turquoise to make their amulets. They mined the gem in New Mexico and Arizona, the latter being home to the “Sleeping Beauty turquoise”. Today, that clear, intense blue stone is considered the finest of its kind, now that the aforementioned Persian mines have diminished.

In spite of that, the allure of the turquoise has endured in the last century. It was a hit in the roaring ‘20s, mostly because it suited the exuberance of the Art Deco movement.

It became a postwar staple, too, for which we have Tiffany & Co. to thank. Their jewellery designer, the legendary Jean Schlumberger, was a big fan of the stone; the turquoise tassel necklace he made for former Vogue editor Babe Paley in the 1950s effectively brought the stone back into fashion.

The gem rode out its popularity in the two decades that came after — it had a bohemian appeal that spoke to the hippies — but it is now being given a second life. On the red carpet, it has been spotted on the likes of Rihanna, Heidi Klum, Megan Fox and Eva Mendez.

Modern jewellers still play with the precious stone, as you’ll see in the designs below. Consider them as gift ideas for that December-born friend of yours; they can be a poetic way of showing that you want your bond to last as long as the beauty of the turquoise holds (hint: a very, very long time). Turquoise is often worn to add a vibrant pop of colour, and nothing demonstrates that better than this ‘Classic’ ring by Irene Neuwirth. The ring, handcrafted from 18-karat gold, features a smattering of tiny diamonds, but for once those precious gems take the backseat. That’s because the Los Angeles-based fine jewellery label had chosen to use a turquoise weighing a hefty 21.62 carats, procured from Arizona’s Kingman Mine. You’ll hardly need more jewellery to spruce up your look after putting this show-stopper on. 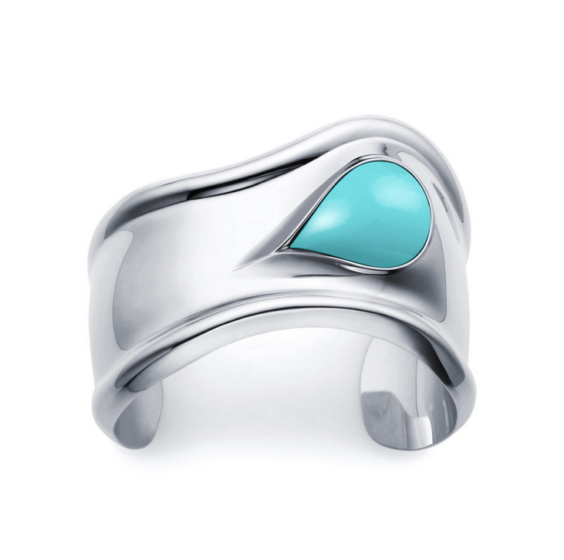 Tiffany & Co.’s iconic Bone cuff is making a comeback now that it’s celebrating its 50th anniversary, and amongst the many versions now available is this design in sterling silver and turquoise. The cuff is as exquisitely carved and sculpted as Elsa Peretti first designed it, but the addition of the blue gem feels like an especially nice touch, given its significance to Tiffany & Co. This Van Cleef & Arpels clip is perfect to gift this December. It features the Hellébore flower, the Christmas rose that blooms only in the heart of winter. Here, its petals are made with a delicate, openwork structure that allows light to pass through each diamond. This also brings out the intense blues of the lapiz lazuli and turquoise stones, both in-laid by hand. 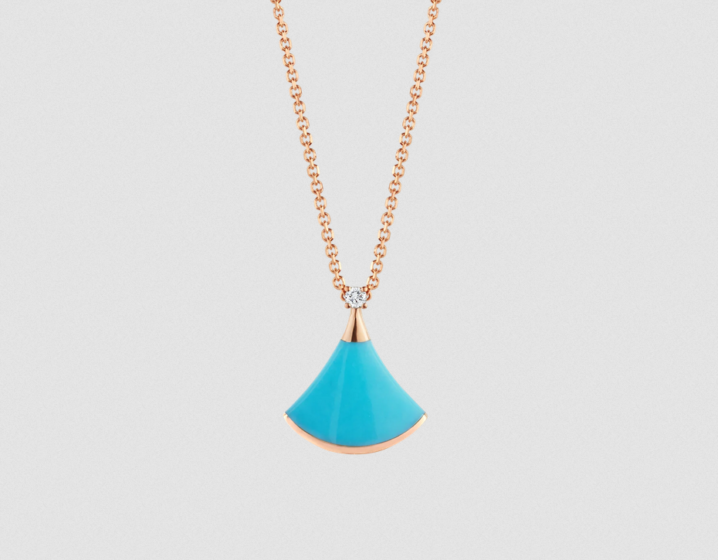 Bulgari really leans into the flourishes of Art Deco with this necklace. See the fan-shaped pendant, boldly sculpted with turquoise, a gem that was heavily favoured in the Twenties. What makes it modern, though, is the use of 18-karat rose gold, which complements the vivid stone surprisingly well. Bulgari certainly has an eye for colour. 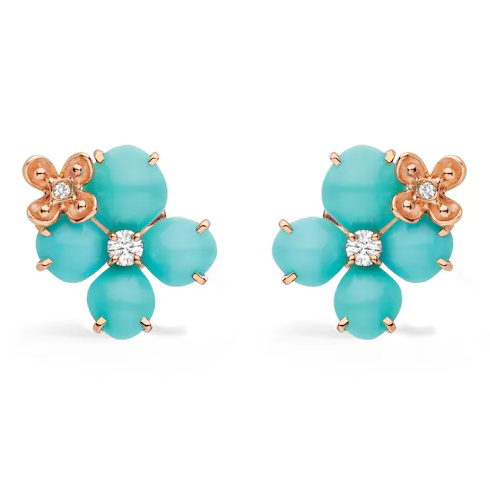 Chaumet’s Hortensia Eden collection was inspired by an older collection that the French jeweller made for the Empress Joséphine and her daughter Hortense, who was named after the hydrangea. That’s why you’ll find the flower blooming across these pink gold earrings, with large turquoise petals and brilliant-cut diamonds. Get them for a loved one who deserves the royal treatment.