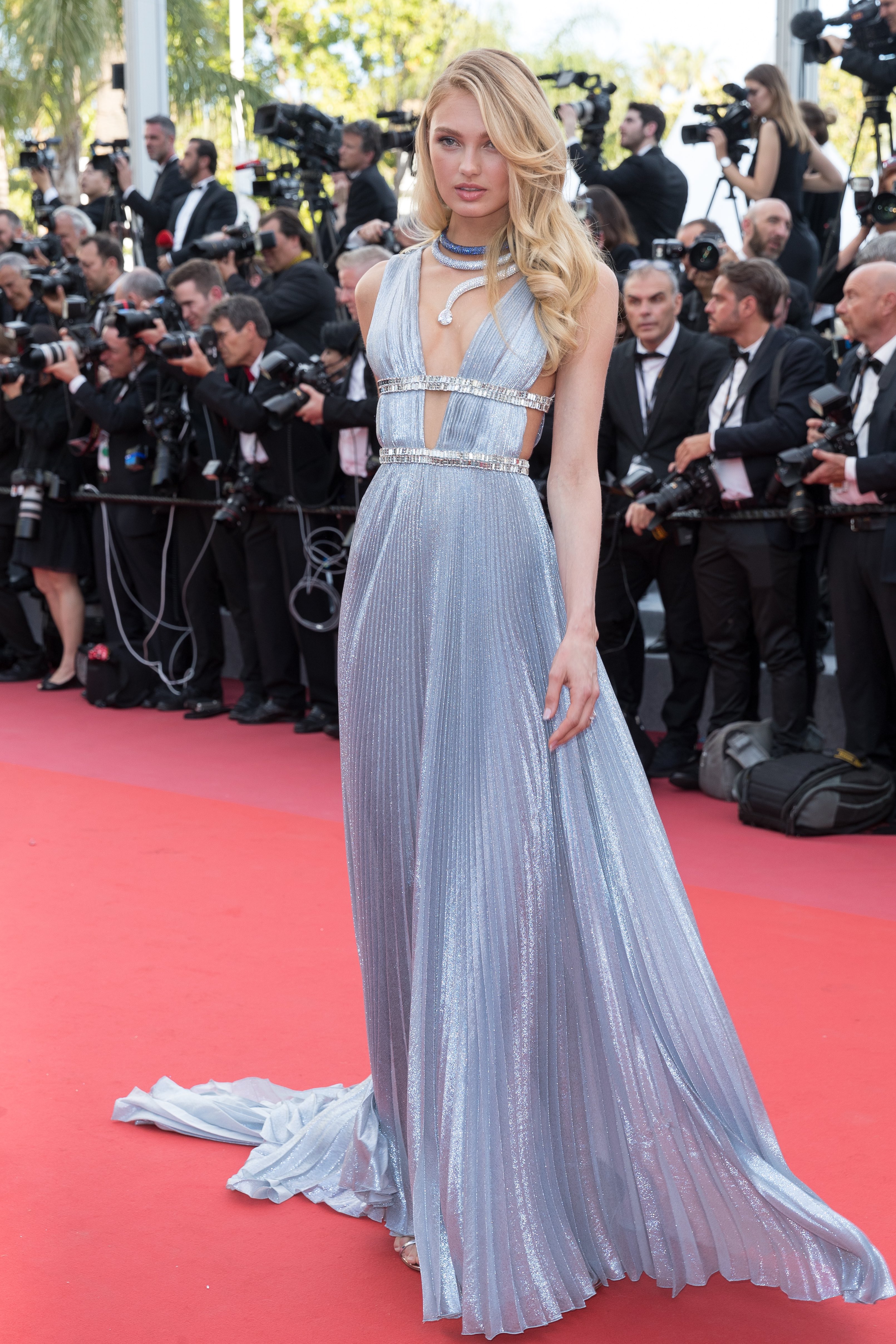 Cannes 2018: The most spectacular jewellery looks

Style
Cannes 2018: The most spectacular jewellery looks
Share this article
Next article

We’re in the tail end of the ongoing Cannes Film Festival, which concludes on 19 May. Entering its 71st edition this year, the annual extravaganza showcases the most promising films from around the world, and has long been recognised as one of the most important events on the movie industry’s calendar.

Cannes 2018 has delivered so far, with its line-up of much-hyped flicks such as Spike Lee’s BlacKkKlansman (based on a true story of an African American police officer infiltrating the Ku Klux Klan) and Ash is Purest White, a Chinese drama about a gangster’s girlfriend. This year’s festival also sees the return of controversial film director Lars von Trier, who was banned from the event for seven years after making Nazi-related comments. He made headlines again, this time for his new movie The House That Jack Built, which sparked mass audience walkouts in response to its extreme violence.

Films aside, Cannes 2018 also plays host to the entertainment world’s biggest and brightest talents. The past few days have seen celebrities and models the likes of Emilia Clarke, Kendall Jenner, and Cannes jury president Cate Blanchett dressed to the nines in gorgeous gowns and magnificent jewellery for their red carpet outings.  Particularly memorable was Blanchett’s choice of jewellery on the festival’s opening day, where she debuted an elaborate pair of orchid-shaped earrings by Chopard — the maker behind the event’s prestigious Palme d’or award.

Blanchett wasn’t the only one with attention-grabbing jewellery, though. Several others, turned up in glittering pieces from prominent labels like Bulgari, Chaumet and De Grisogono. Scroll through our gallery below for our favourite jewellery looks from Cannes 2018. 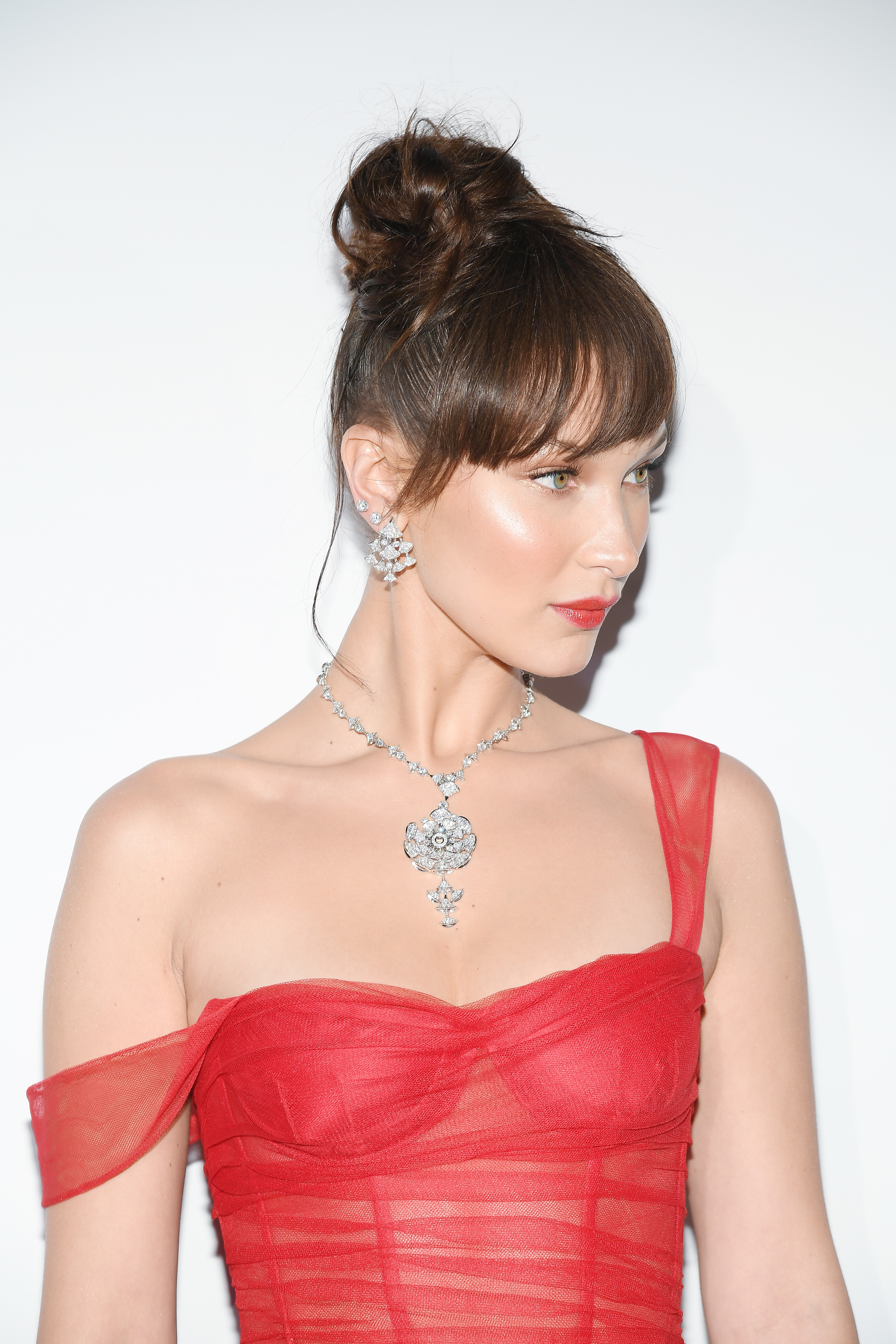 Spotted at a dinner hosted by Dior and French magazine Madame Figaro, Bella Hadid looked stunning in a crimson Dior gown paired with Bulgari‘s High Jewellery necklace, which was crafted in white gold and adorned with a cluster of fan-like motifs bedecked with round brilliant-cut and pavé diamonds. She also wore the brand’s High Jewellery white gold earrings mounted with six round brilliant-cut diamonds and 4.93 carats of pavé diamonds, along with a pair of 1.00-carat diamond studs. 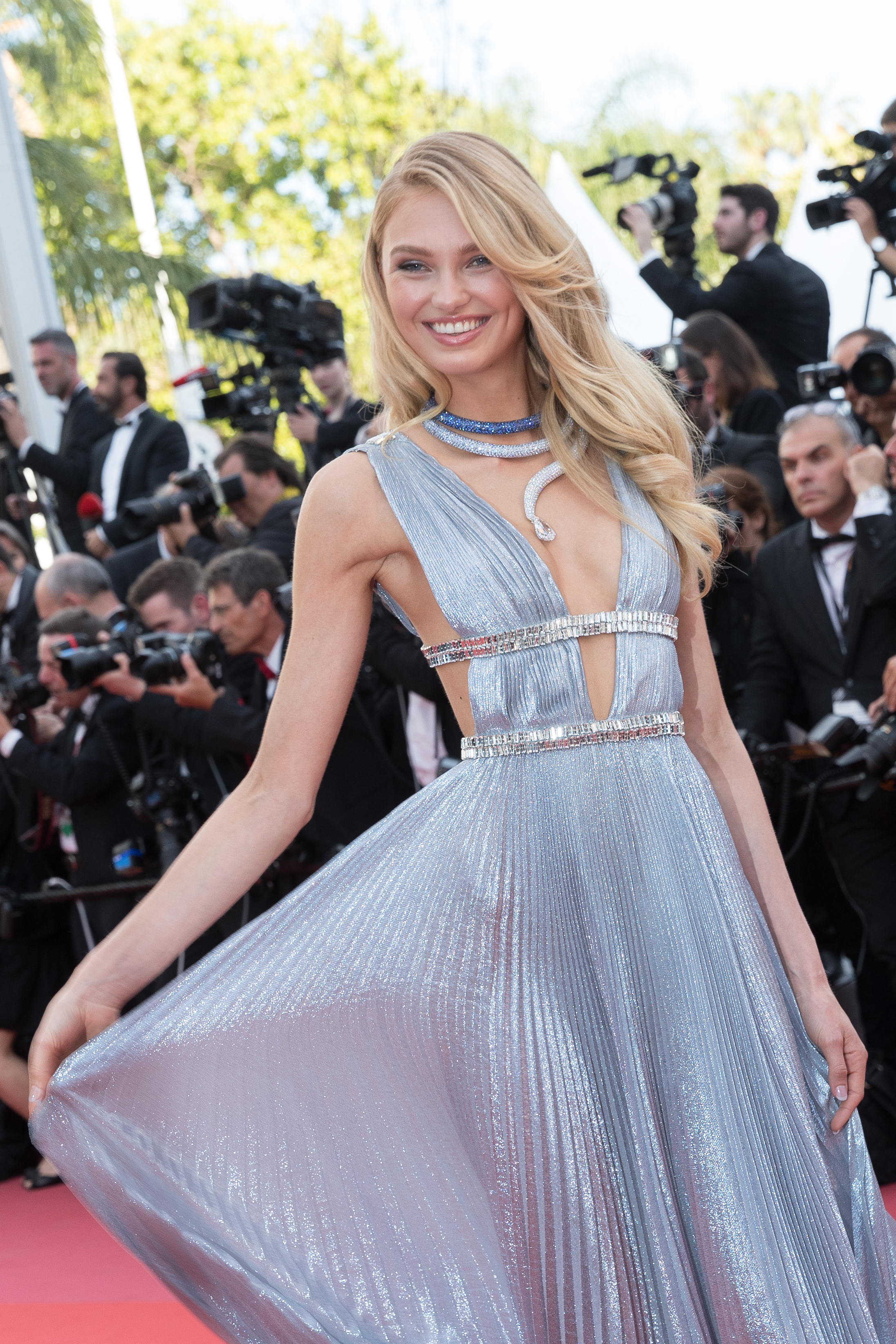 At the opening of the 71st Cannes Film Festival, Dutch model Romee Strijd took the red carpet by storm in her De Grisogono High Jewellery necklace, which coiled around her neck in a dazzling confection of blue sapphires, white diamonds, and a large 42.53-carat pear-cut white diamond. She also wore a High Jewellery ring set in white gold and adorned with one pear-cut diamond, one square emerald-cut diamond, and a series of smaller sparklers. Strijd’s jewellery perfectly complemented her shimmering Alberta Ferreti dress. 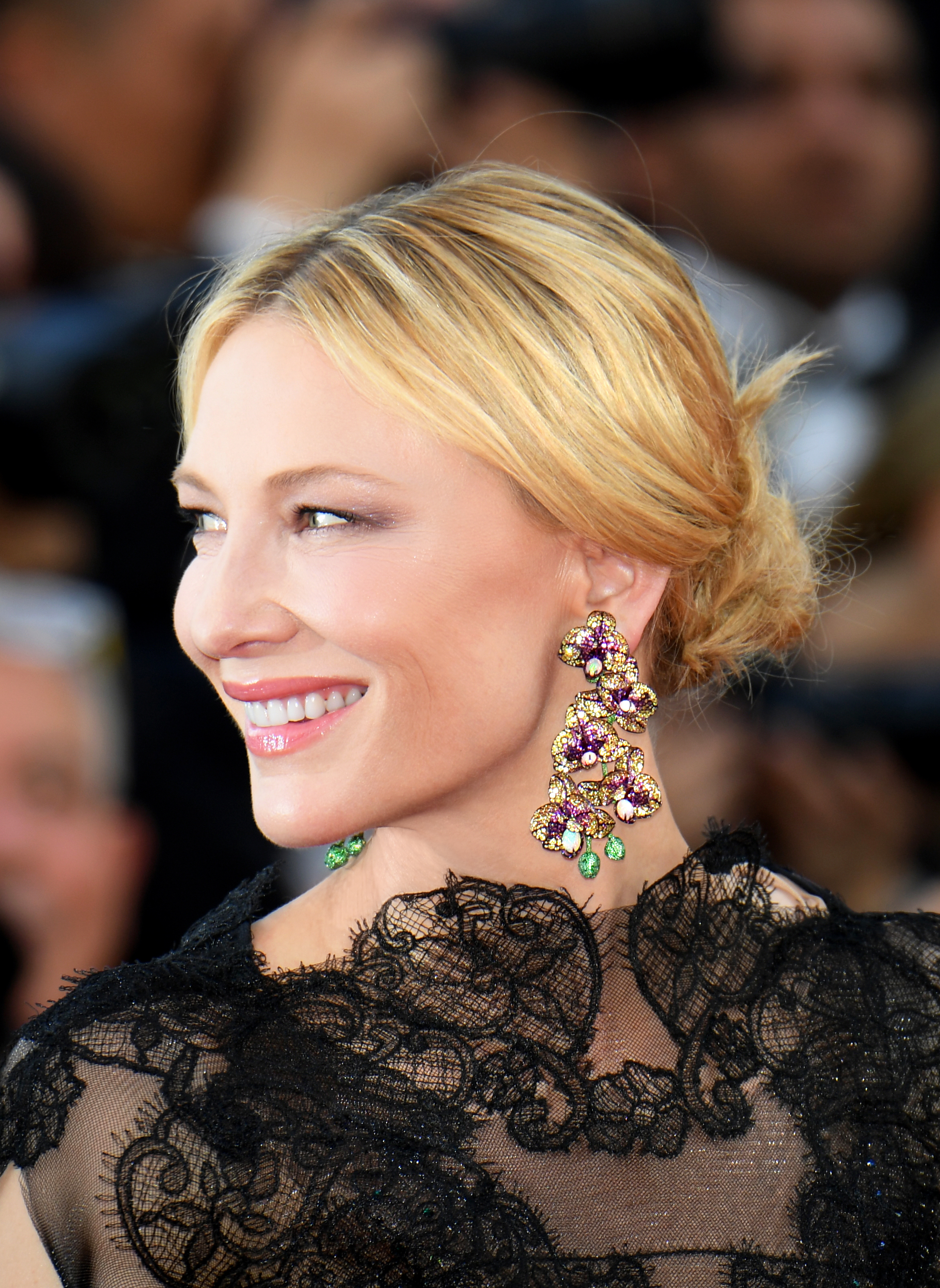 Cate Blanchett, who’s also the president of the 71st Cannes Film Festival jury, was a showstopper on opening day with her Armani Privé dress and exquisite Chopard statement earrings, the latter of which featured purple titanium orchid flowers bedecked with white opals, yellow sapphires, and garnets. These colourful jewels, which are part of the brand’s new Red Carpet 2018 collection, are also crafted with a delicate gold stalk and green buds set with over 4,800 tsavorites. 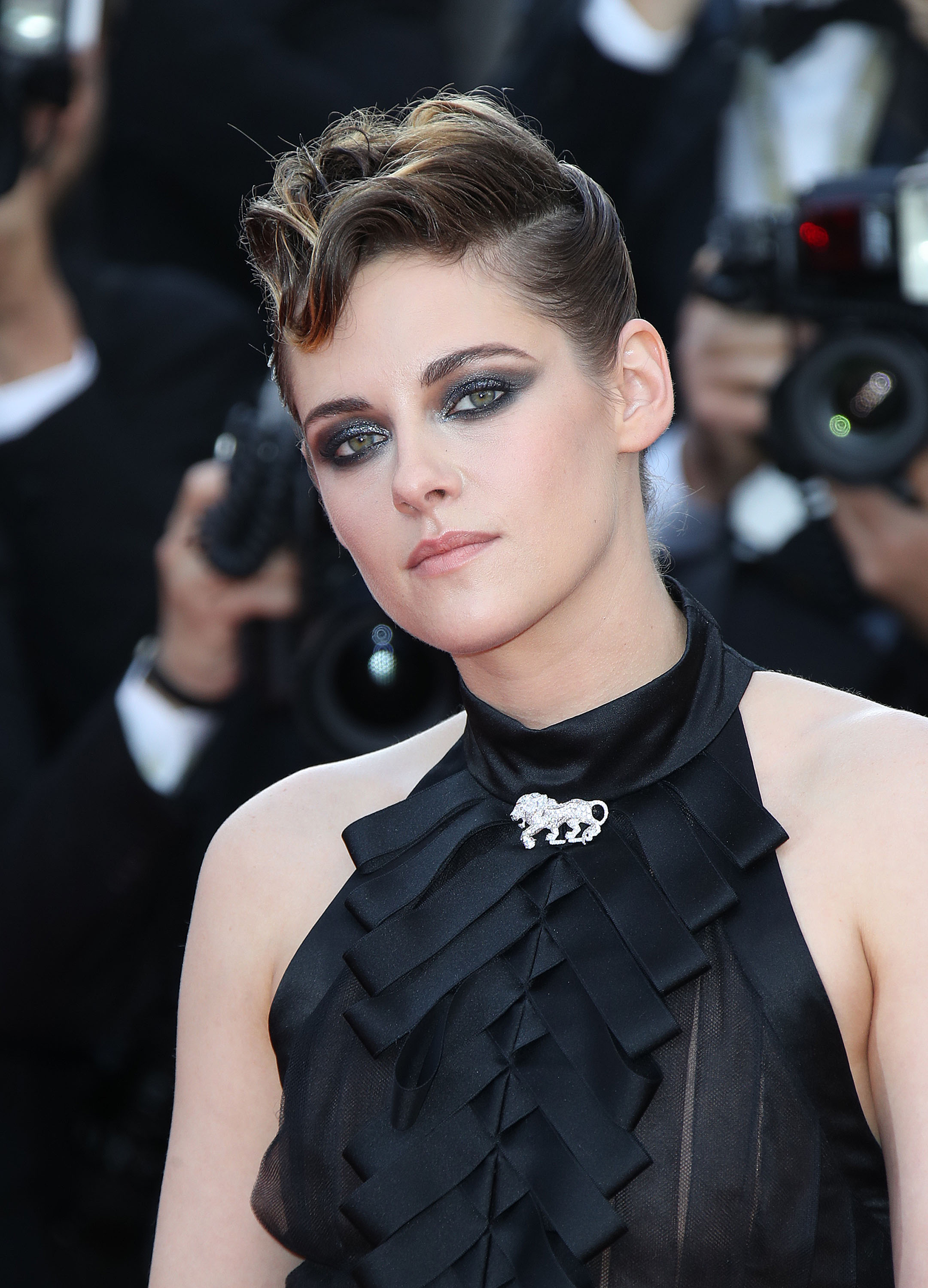 Kristen Stewart was decked out in top-to-toe Chanel glamour at the opening ceremony of the film festival. The Cannes jury member skipped earrings and wore only a L’esprit Du Lion “Timeless” brooch fashioned in 18k white gold and draped completely in diamonds. A simple look, but effortlessly chic when coupled with Stewart’s black silk dress from Chanel’s FW18 line. 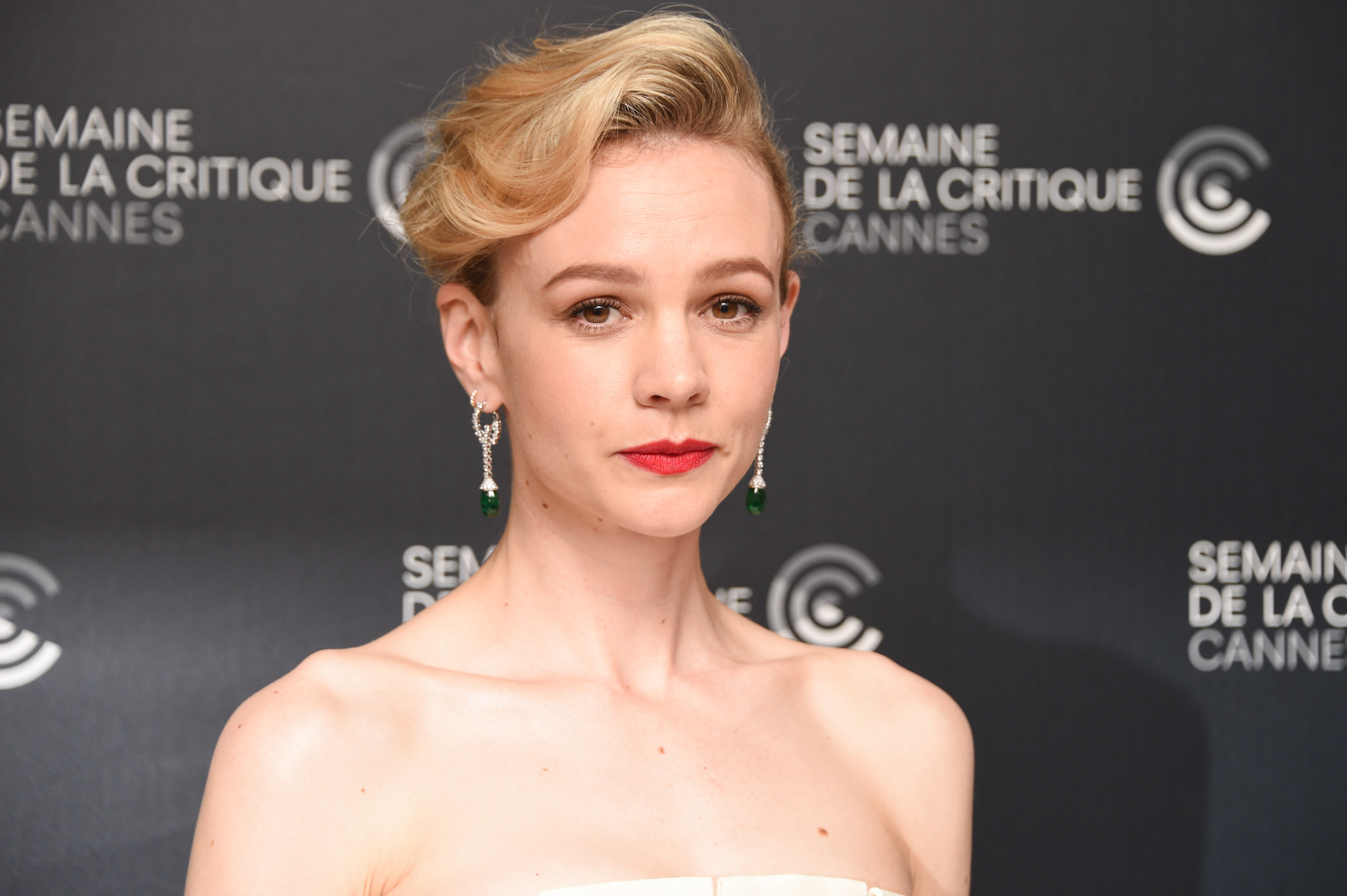 While most of the other celebrities in attendance favoured flashy jewels with bold colours, statement designs, and large gemstones, Carey Mulligan opted for a sleeker, pared-down look with her dainty Chaumet Classic earrings and cream-coloured Dior gown. Her earrings were set in white gold, and featured 4.28 carats of diamonds that culminated in Zambian emeralds (22.09 carats). Evidently, Mulligan made quite the lasting impression at the premiere of Wildlife, which she stars in. 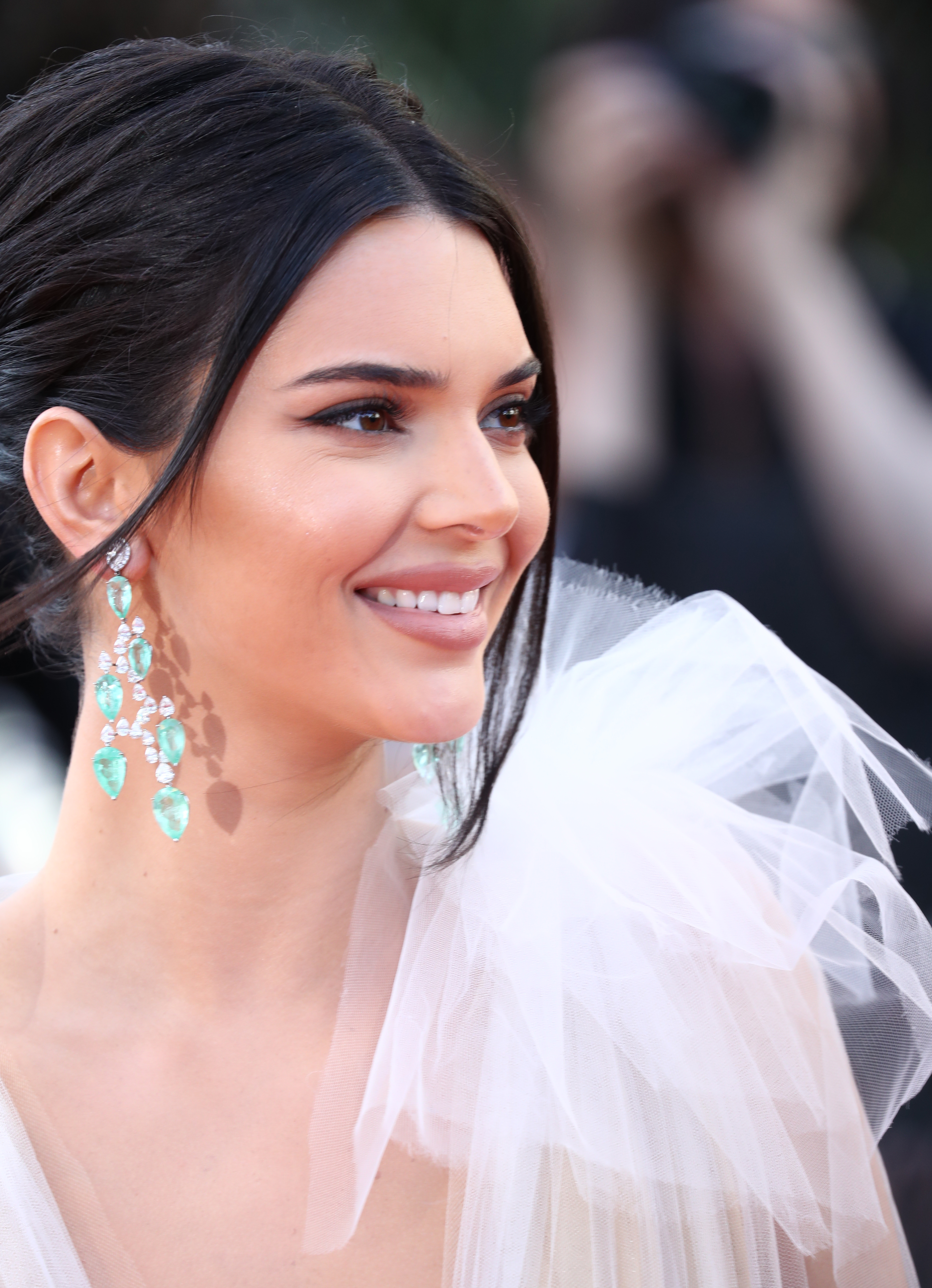 Looking ethereal in a translucent Schiaparelli frock at the premiere of Les Filles Du Soleil, model Kendall Jenner opted for a dreamy pair of Chopard Haute Joaillerie white gold earrings comprising 68.01 carats of pear-shaped emeralds hanging from and connected by delicate white diamonds — which created an illusion of the stones floating in mid-air. 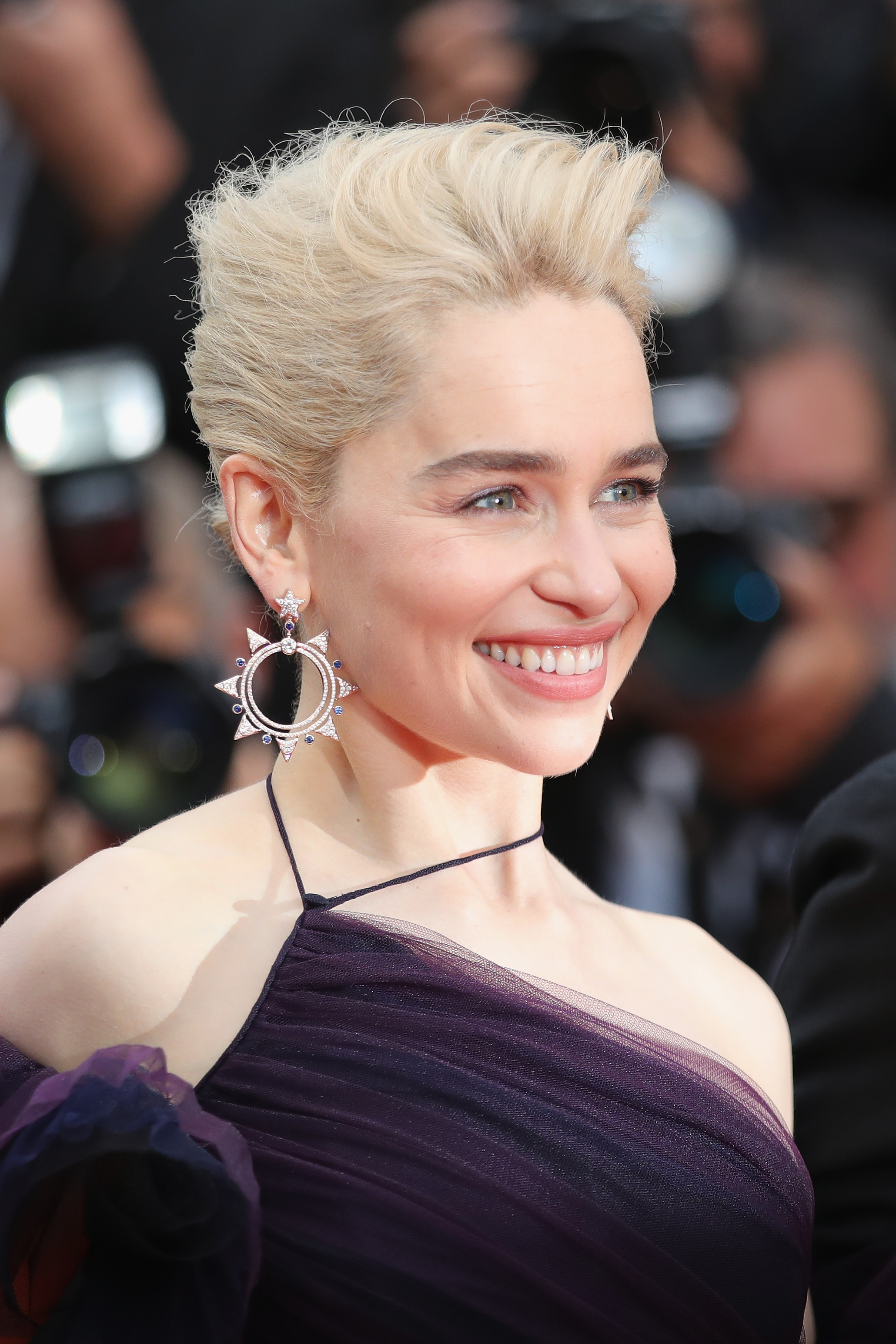 Solo: A Star Wars Story star Emilia Clarke took to the red carpet in a custom-made Dior gown accessorised with an eye-catching pair of Festa dell’Infanzia pink gold earrings from Bulgari’s high jewellery range. Her earrings featured star motifs and an assortment of brilliant-cut diamonds, round sapphires, and pavé diamonds. Clarke rounded off her ensemble with a pink gold ring mounted with rubellite, carrè-cut emeralds and pavé diamonds, and decorated with turquoise details. 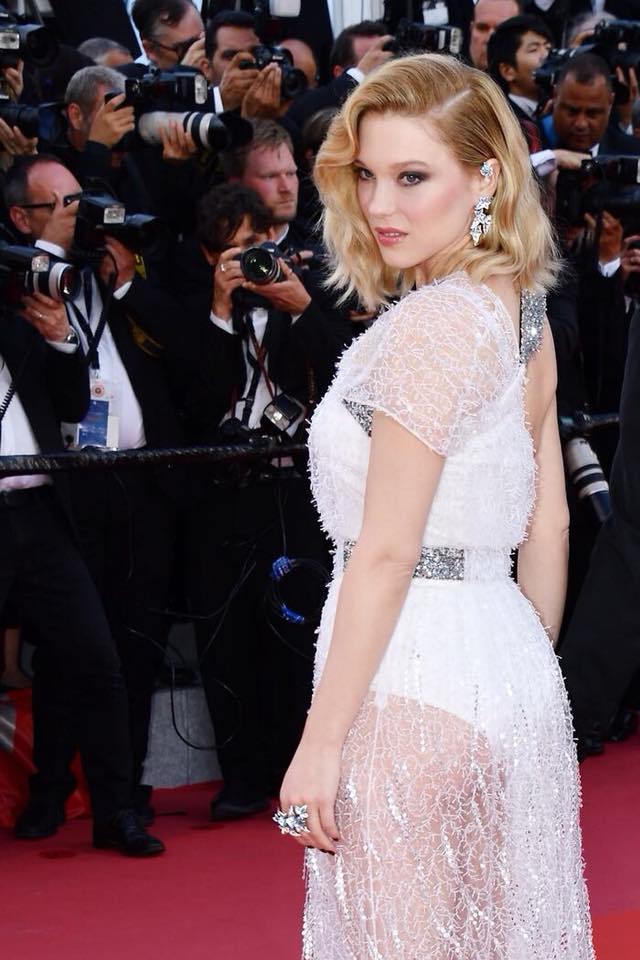 Cannes jury member Léa Seydoux stepped out at the premiere of Everybody Knows in a white Louis Vuitton frock accented with Boucheron‘s Lierre Givré double ring and Lierre de Paris asymmetrical pendant earrings — the latter of which showcase intricate ivy motifs that appear to dangle off her ears. Both jewels belong to Boucheron’s upcoming Nature Triomphante high jewellery collection, slated to launch in Paris in July. 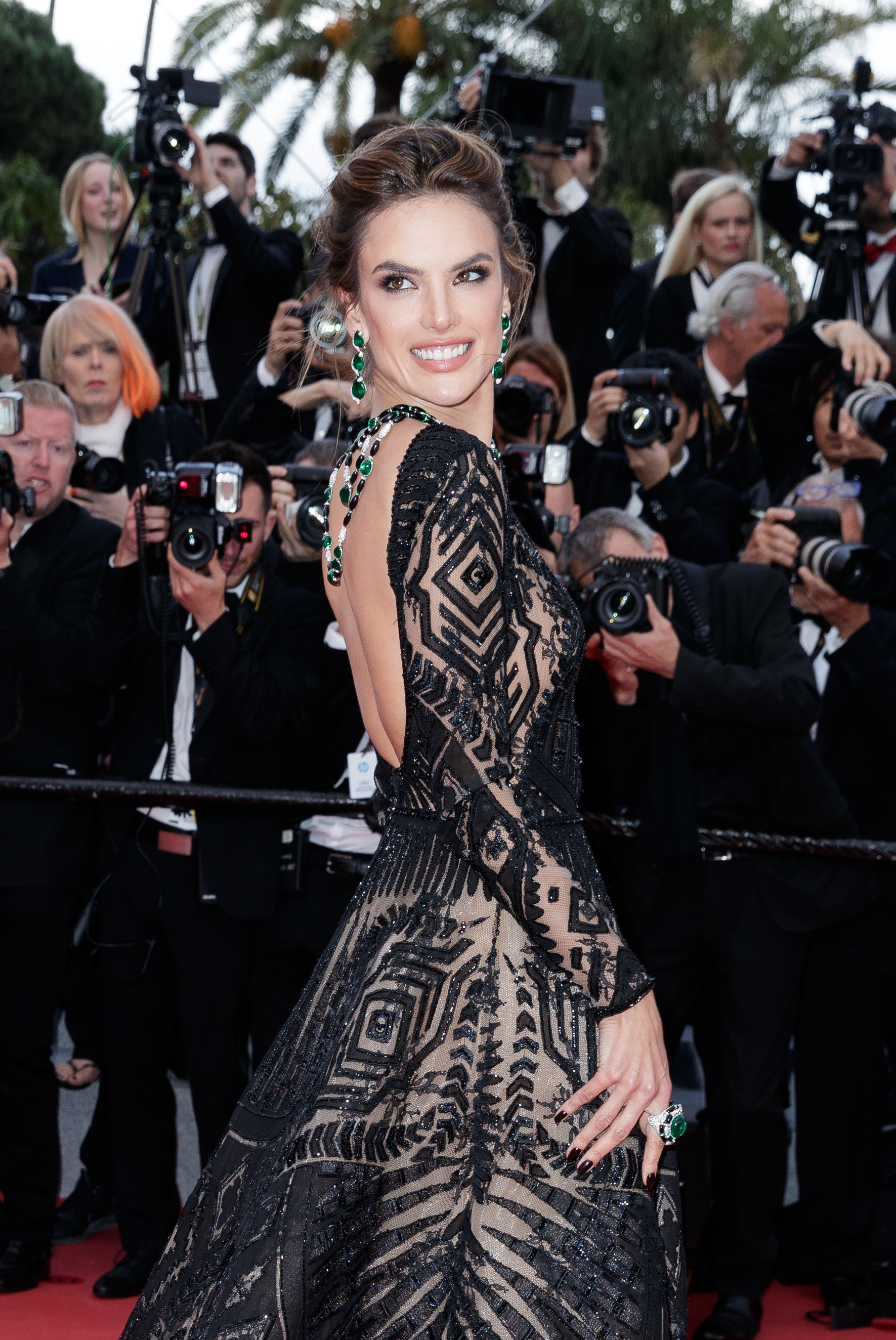 Seen at the premiere of BlacKkKlansman, model Alessandra Ambrosio looked incredible in her Zuhair Murad dress paired with chunky De Grisogono High Jewellery earrings festooned with emeralds and white diamonds. Encircling her neck was a High Jewellery necklace, which she deliberately wore backwards so its emeralds, diamonds and black onyxes cascaded down her back. Click here to see how it looked from the front. Ambrosio capped off her look with a matching emerald, onyx and diamond ring on her finger. 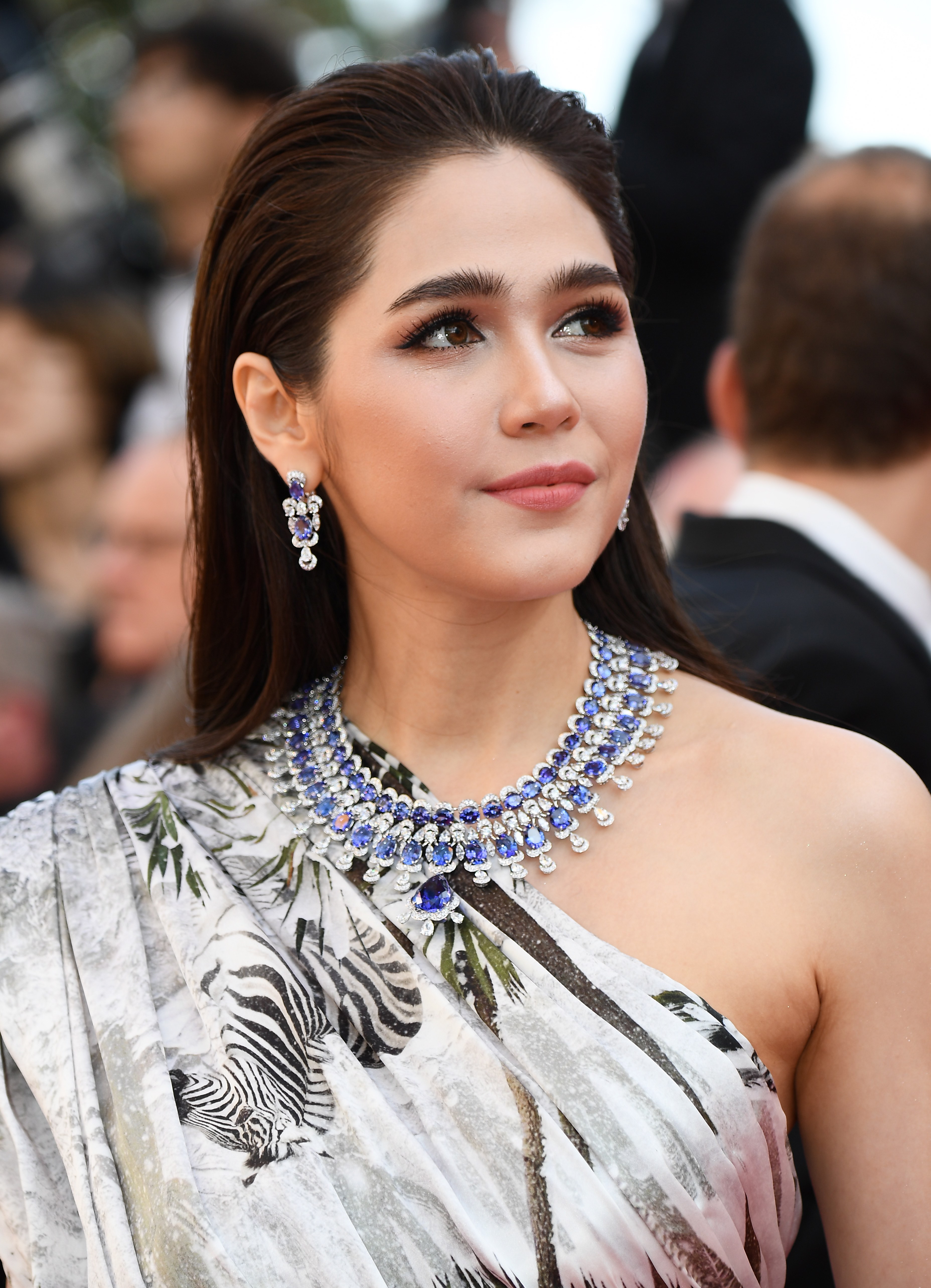 British-Thai actress Araya Hargate was the very picture of sophistication at the premiere of Les Filles Du Soleil, where she jazzed up her Jean Paul Gaultier couture dress with a suite of Chopard’s Red Carpet 2018 jewels. A necklace swathed in 228.16 carats of tanzanites and 84.74 carats of diamonds wrapped around her neck, while elegant matching earrings framed her face.