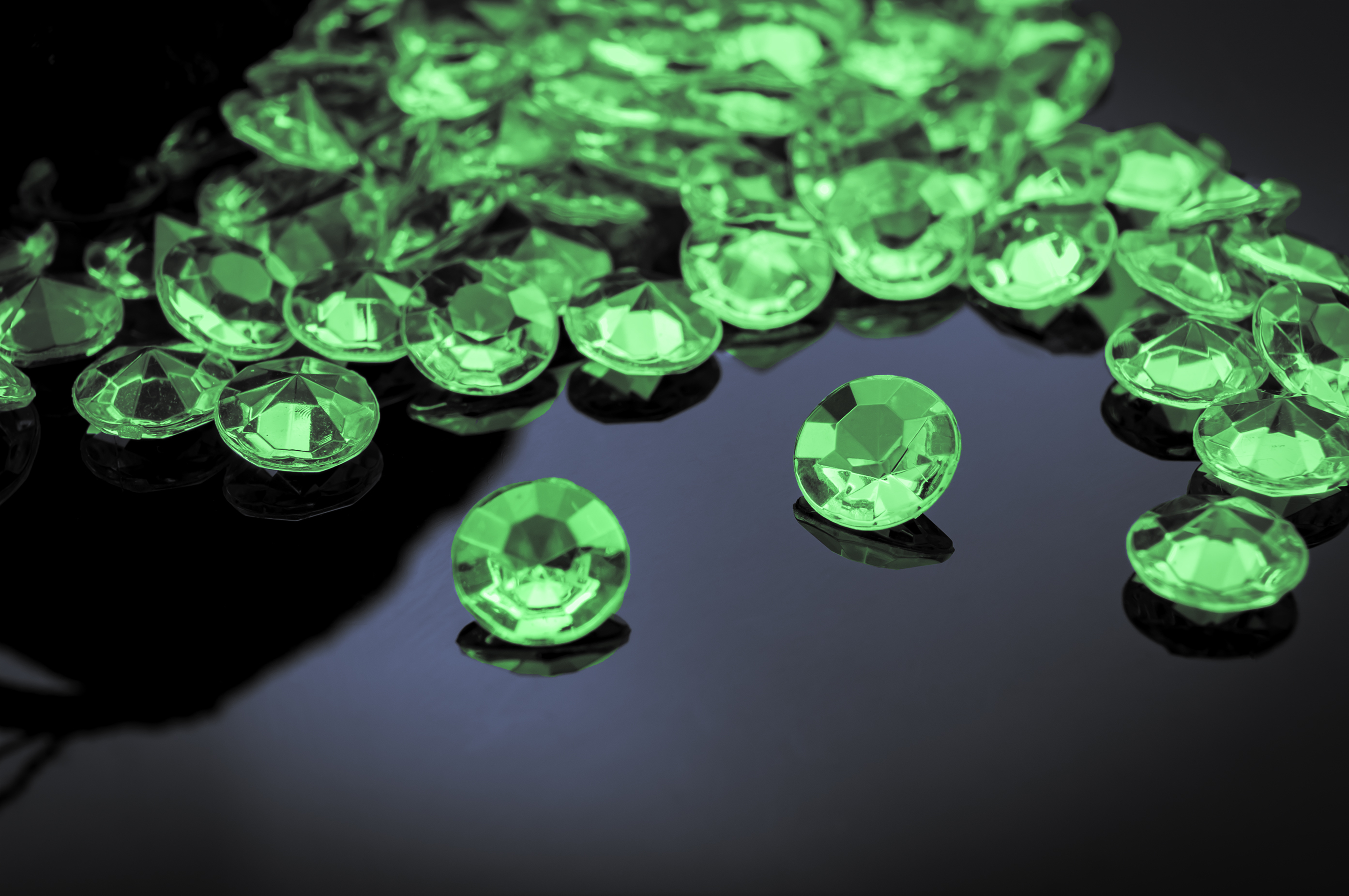 On June 20, an 18.4-carat Colombian emerald ring that once belonged to the prominent Rockefeller family, will go under the hammer at a Christie’s New York Magnificent Jewels sale. Bedecked with diamonds and set in platinum, the elegant ring is expected to sell for between US$4 million (S$5.6 million) and US$6 million (S$8.4 million). It’s one of the most important lots, and its maximum estimate — if achieved — will make it the most expensive emerald per carat ever to be sold at auction.

While diamonds have long dominated auctions with staggeringly high prices, emeralds have performed pretty well too. A noteworthy example is screen legend Elizabeth Taylor’s Bulgari emerald and diamond pendant brooch, which weighed 23.46 carats and went under the hammer in 2011 for US$6,578,500 (S$9,171,152). At US$280,413(S$390,926) per carat, it set a world record for an emerald per carat.

A type of beryl, emeralds obtain their deep green hue from trace amounts of chromium and vanadium. Despite ranking at a fairly durable 7.5 to 8 on the Mohs hardness scale, they are known for being easily breakable, due to the presence of inclusions in their hexagonal structure. Their roots go way back to the days of ancient Egypt, where the first emerald mines were located as early as 3500BC. One of their most famous fans was Cleopatra, who often incorporated emeralds in her royal jewels.

Aptly enough, the emerald is the birthstone for the month of May. Its vivid green colour may also remind one of Greenery, Pantone’s colour of the year. Here are 5 of our favourite emerald jewellery designs. 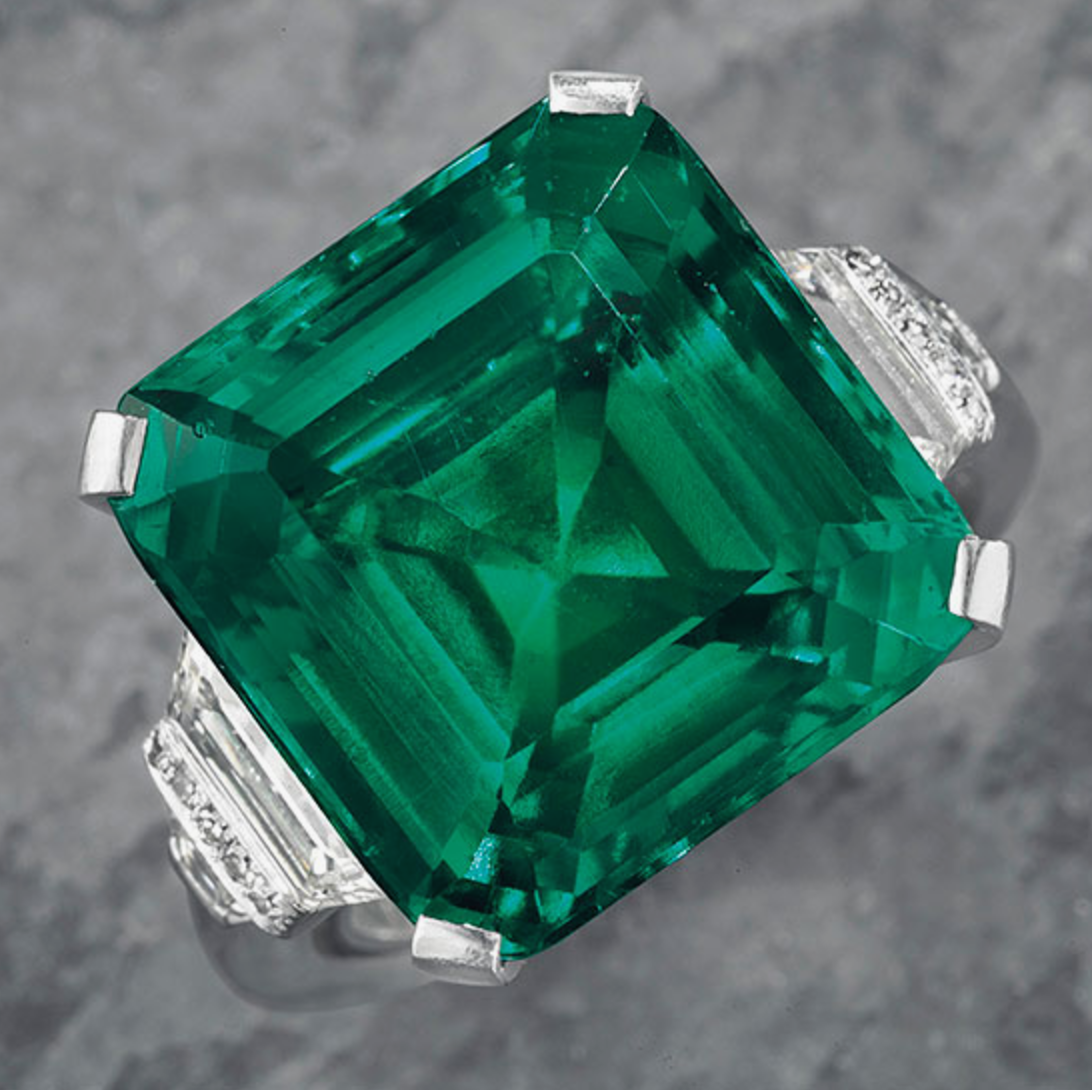 Comprising a large 18.04-carat, octagonal step cut emerald flanked by baguette cut diamonds, this beautiful ring will be up for sale at a Christie’s New York auction on 20 June. The ring was designed in 1948 by US jeweller Raymond Carter Yard, and its centre emerald was originally part of a brooch owned by the Rockefeller family. 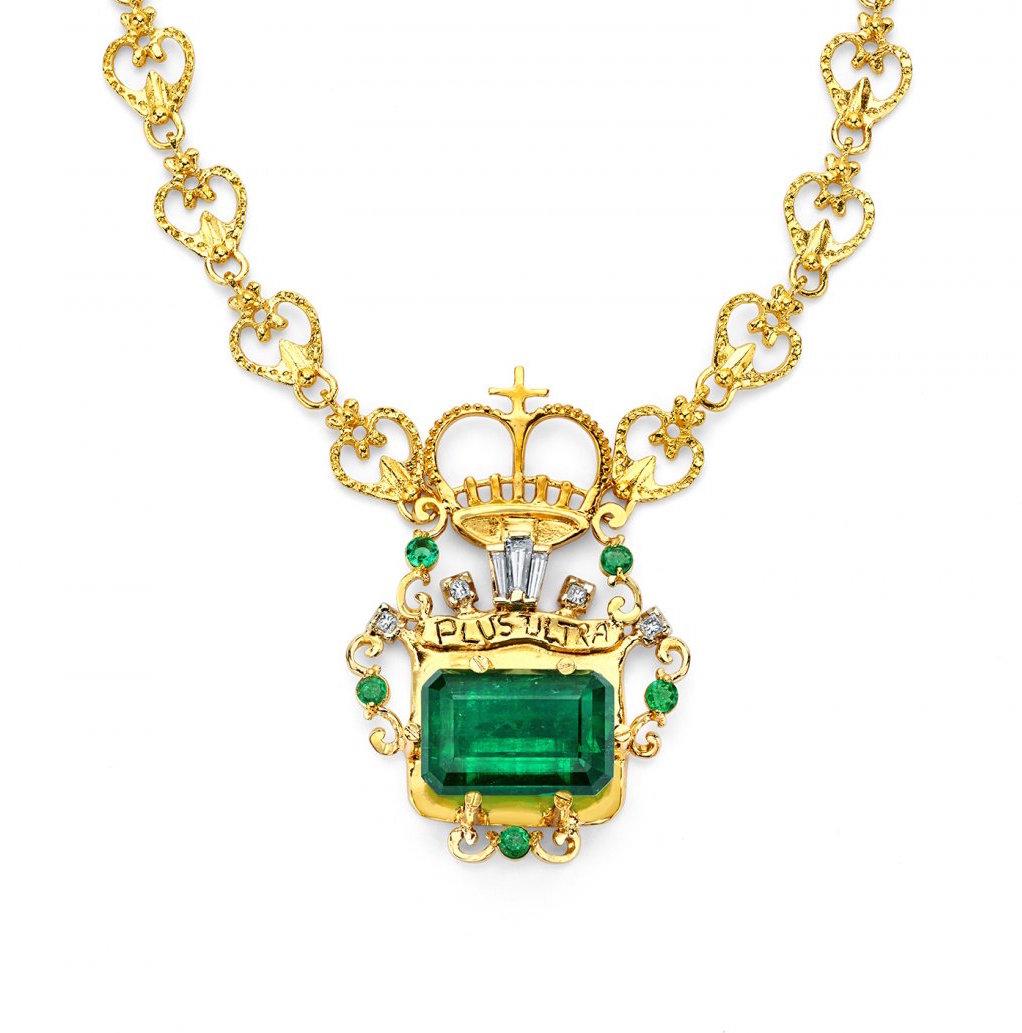 Formerly part of US jewellery collector Marcial de Gomar’s treasure trove of bejewelled beauties, this striking necklace features a 24.34-carat emerald cut Muzo emerald from the shipwreck of the Spanish vessel Nuestra Señora de Atocha. The lustrous green rock is set on 22k and 18k gold, which has been carved into intricate crown motifs, and is accompanied by smaller round cut emeralds, and baguette and round cut diamonds. It was put up for an online sale last month by auction house Guernsey’s and was expected to fetch US$5 million (S$7 million) to US$6 million (S$8.4 million). The necklace wound up unsold, so you still have a chance to snag this gorgeous piece (if you have the dough to spare). 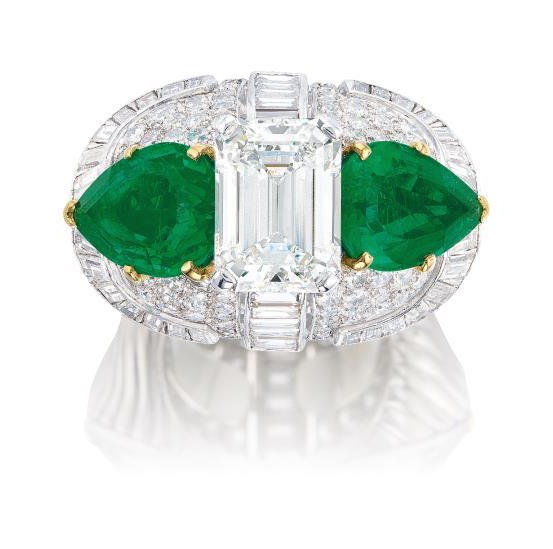 Dating back to 1950, this retro Cartier ring showcases an internally flawless, 5.31-carat D-colour diamond flanked by two Colombian, no-oil emeralds weighing over 4 carats each. With a gallery that resembles a scarab beetle’s wings — complete with touches of gold — , the jewel’s design is believed to be inspired by Egyptian motifs. It is signed by Monture Cartier, and is estimated to sell for between HKD$3.6 million (S$644,409) and HKD4.5 million (S$805,512) at a Phillips auction in Hong Kong on 29 May. 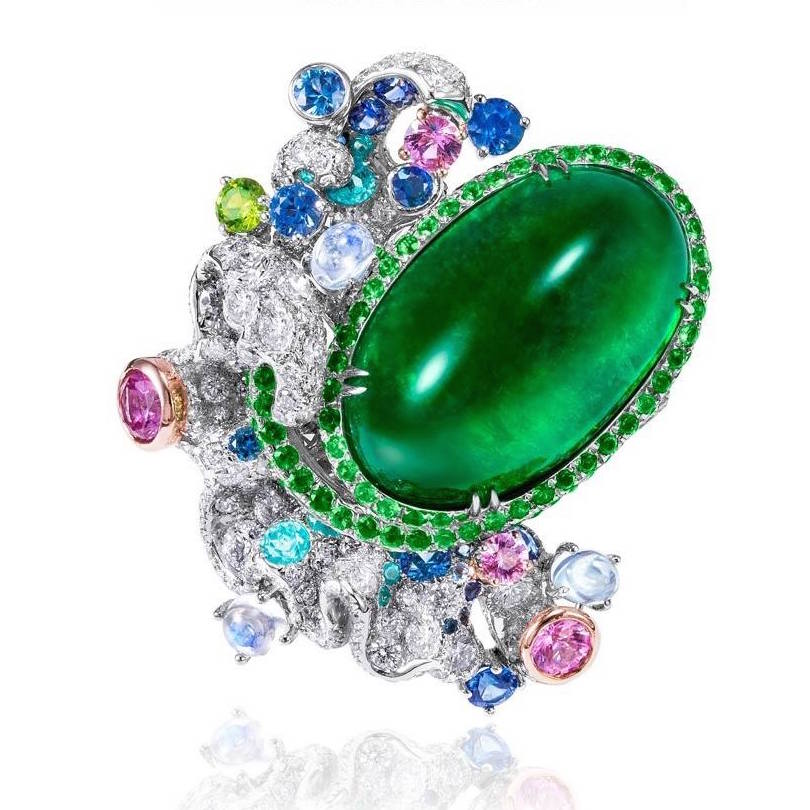 This resplendent ring by Taiwanese jeweller Anna Hu is festooned with a massive 20.32-carat emerald ringed by many small emeralds, and adorned with a colourful assortment of diamonds, blue and pink sapphires, aquamarines and peridots. Hu recently celebrated her business’ 10th year anniversary with a private selling exhibition at Christie’s Luxury Salon in London from 5 to 9 May. 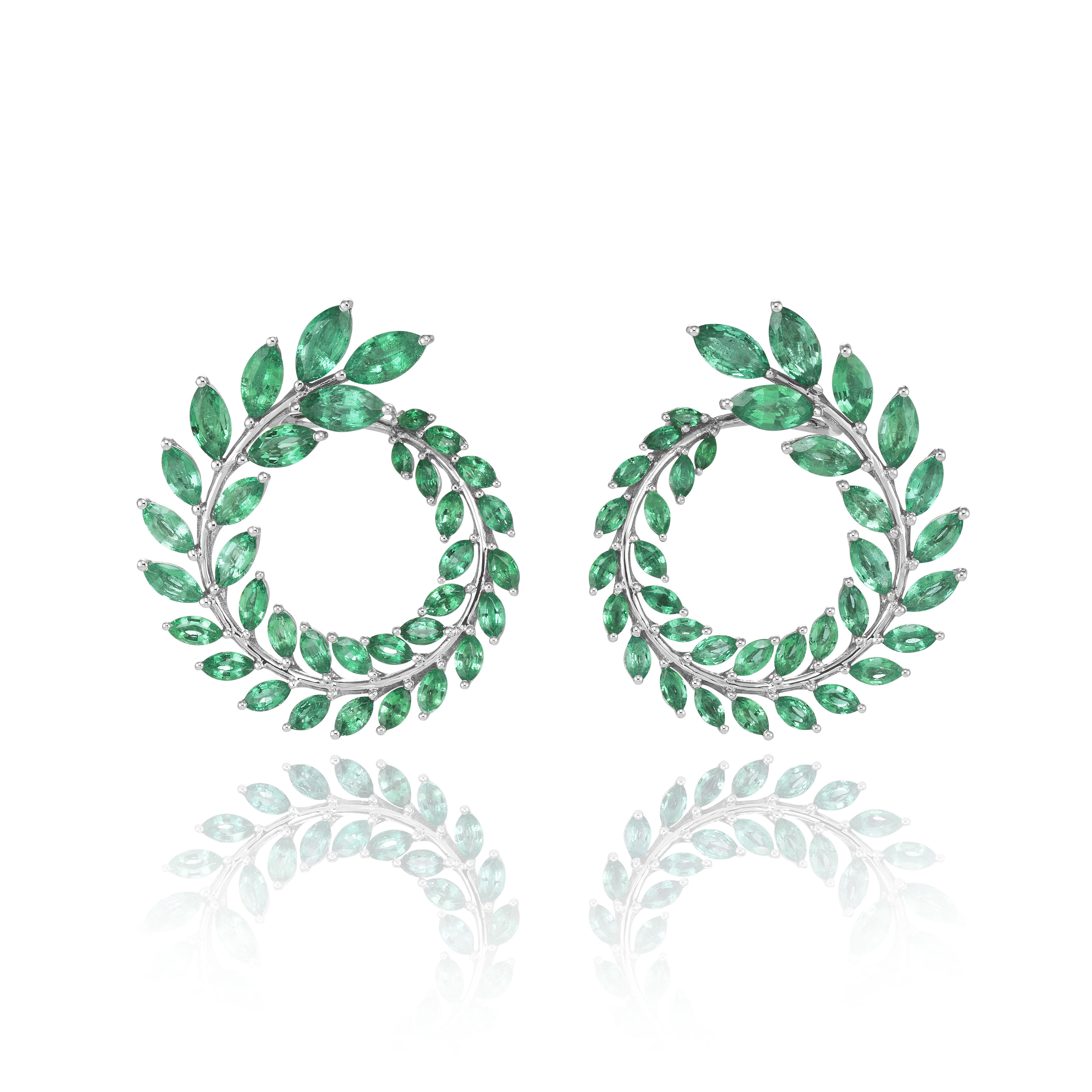 A new addition to Chopard’s Green Carpet sustainable jewellery collection, these lovely earrings are crafted in 18k white ethical gold that’s certified ‘Fairmined’, and are mounted with 11.8 carats worth of marquise cut emeralds — which are strategically assembled to resemble swirling leaves. All of the emeralds are responsibly mined from Gemfields’ Kagem mine in Zambia.