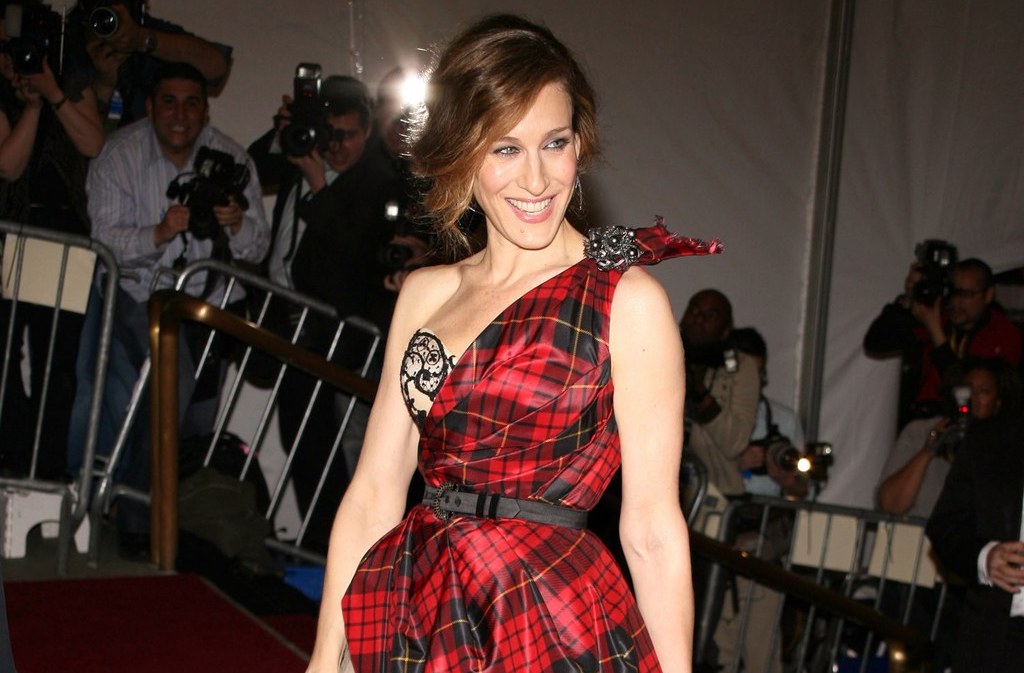 At the late Alexander McQueen‘s Fall/Winter 1999 ready-to-wear show, the audience watched in rapt attention as British model Laura Morgan stepped out in a stiff metal corset that wrapped snugly around her torso. Her face was adorned with frosty white makeup and framed by loops of braids, adding to her futuristic look.

But all eyes were inevitably on the corset, which adhered to and hugged every curve of Morgan’s frame. We can only imagine the questions that went through their minds — because we thought the same when we first saw pictures of it: How does one move in such a contraption? Isn’t it uncomfortable? And who would have thought of something so eccentric?

The answer to the latter question is British jeweller Shaun Leane. A long time friend and collaborator of McQueen’s, Leane picked up silversmithing to produce the corset. A concrete cast was first created using a mould of Morgan’s body, before being mounted with meticulously shaped coils of aluminium. Screws on the side kept its front and back portions firmly attached.

That iconic coiled corset is only one of many quirky designs in Leane’s portfolio. His other equally showstopping pieces include a pair of spiky porcupine earrings, and a Tahitian pearl thistle brooch worn by actress Sarah Jessica Parker at the 2000 Metropolitan Museum of Art Gala in New York City (see main photo).

These famed jewels, along with over 40 of Leane’s creations, will go under the hammer at a sale organised by Sotheby’s New York on 4 December. Titled ‘Couture Fashion Jewellery: The Personal Archive of Shaun Leane’, the auction showcases jewellery pieces that were designed for the likes of McQueen and Givenchy, and items worn by starlets such as Kate Moss and Sarah Jessica Parker.

We can’t pick just one favourite, so here are 7 of our top picks from the upcoming sale. 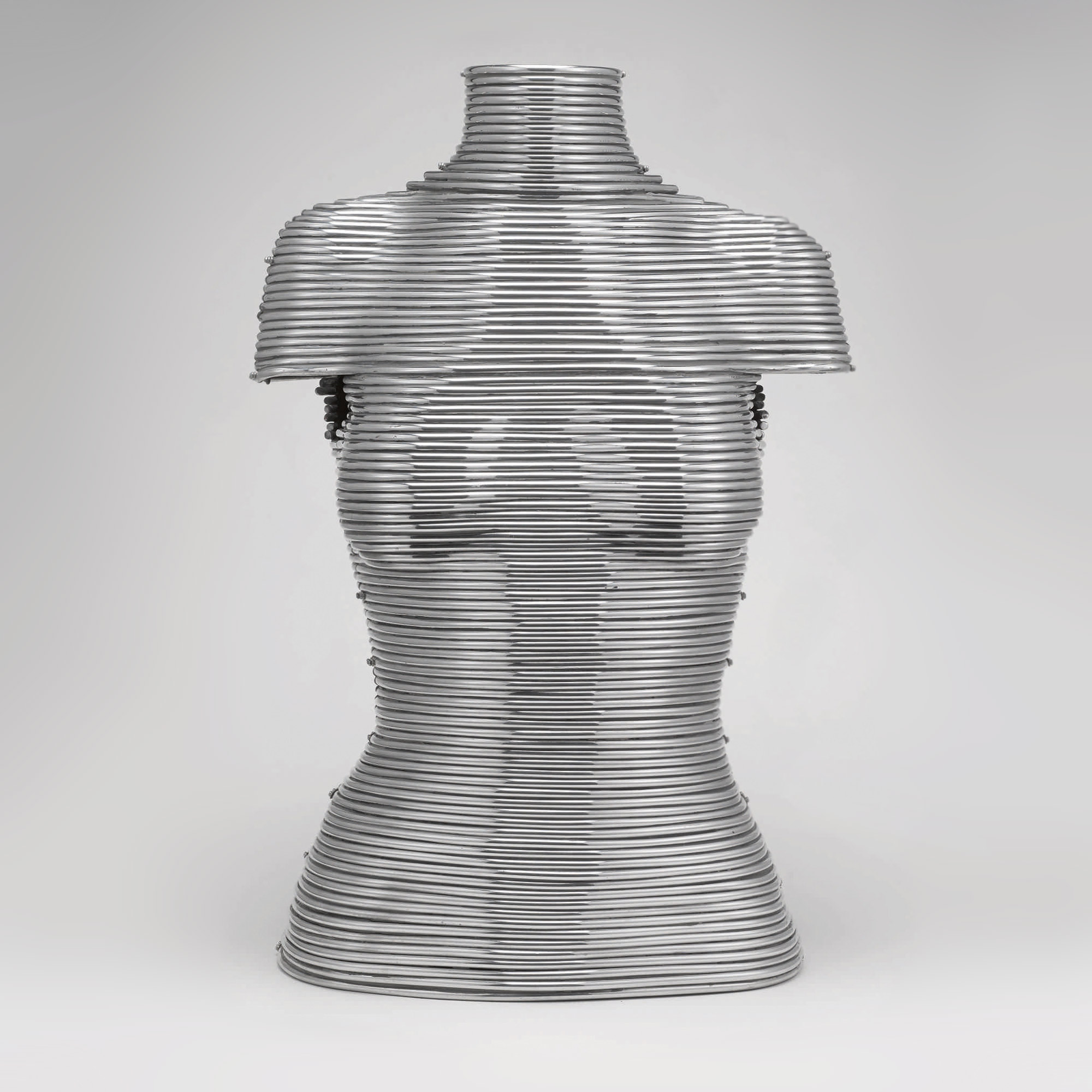 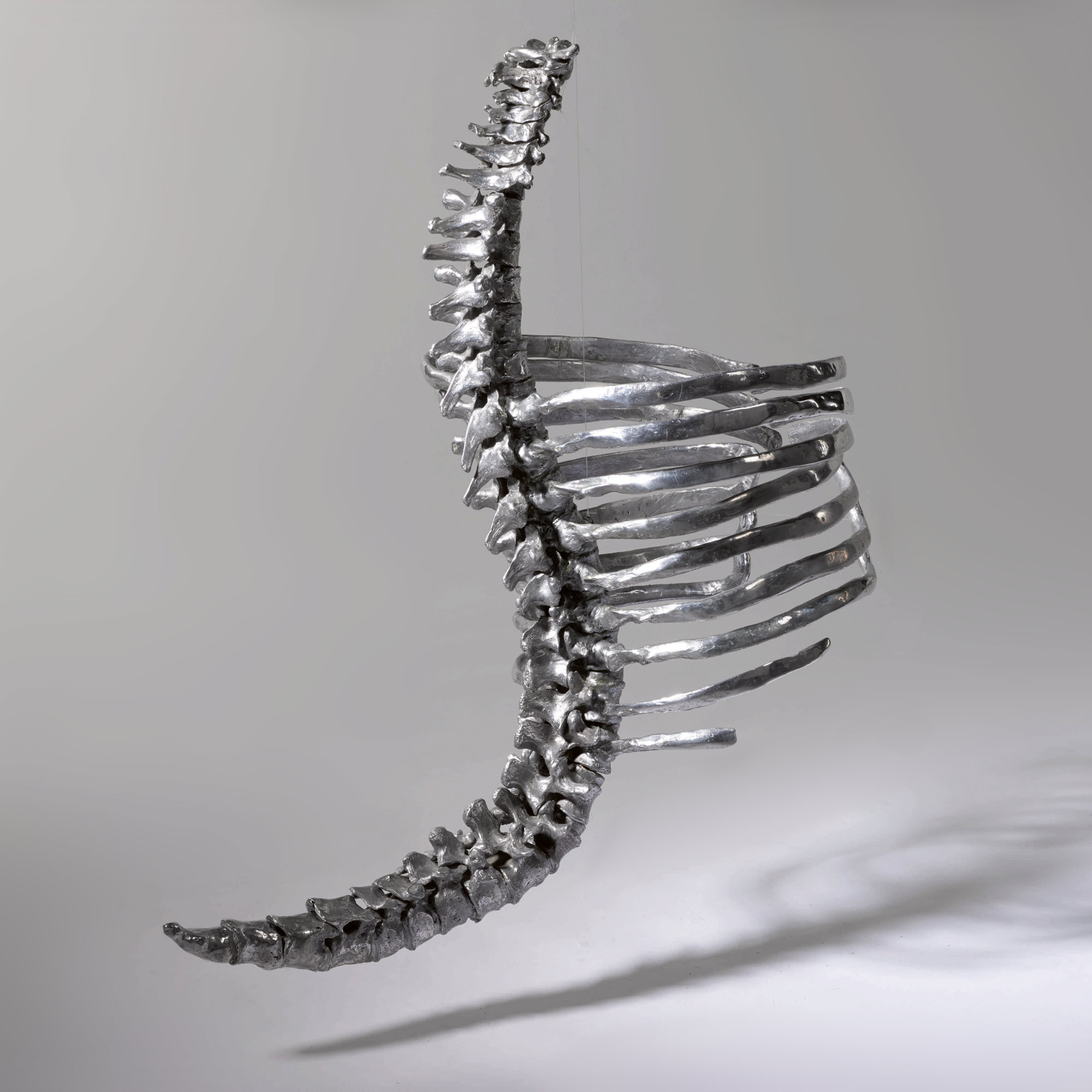 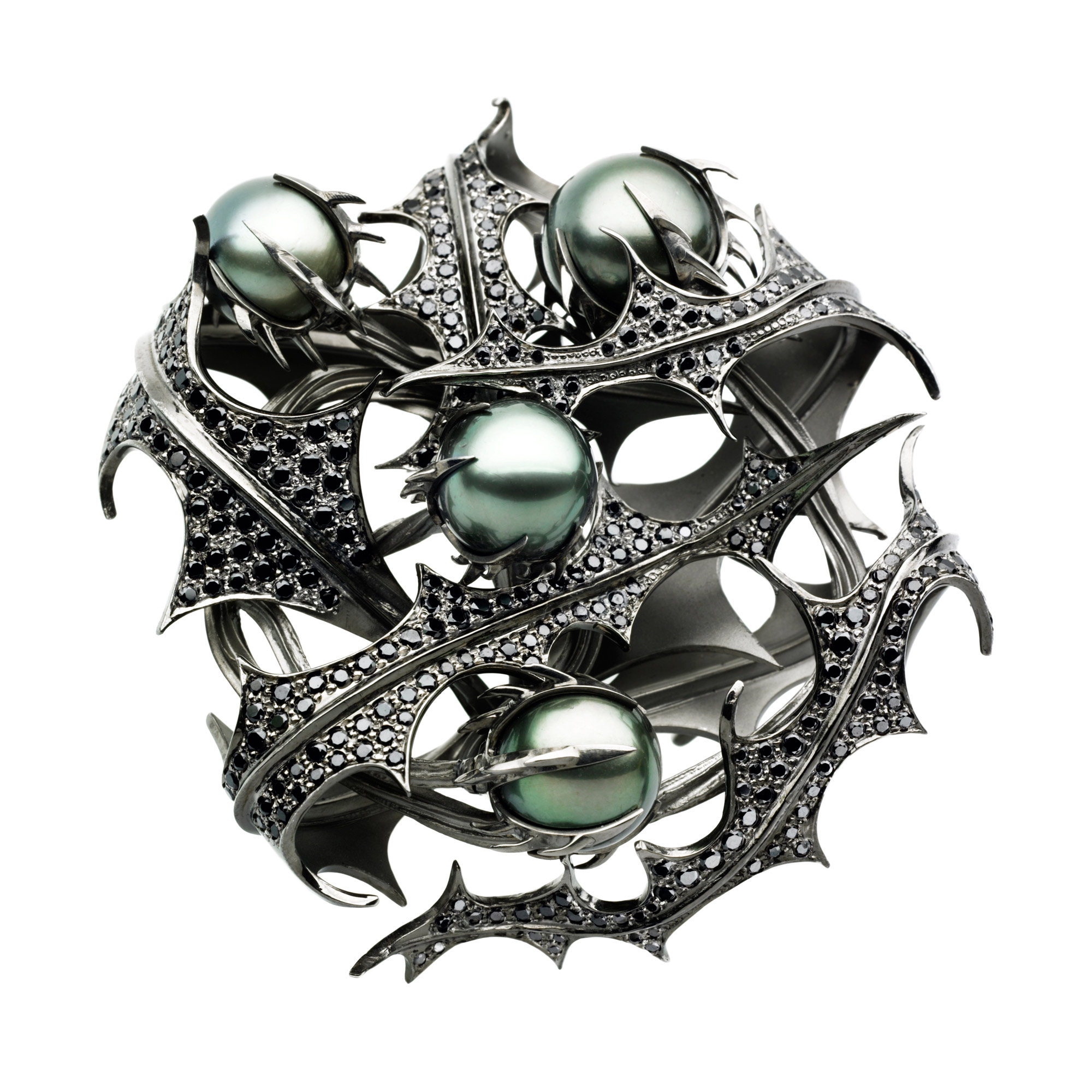 This goth-chic brooch comprises spiked leaves encrusted with black spinel and claw-like motifs curling around four Grade AAA Tahitian black pearls. It was famously worn by Sarah Jessica Parker at the 2006 Met Gala. It’s estimated to sell for between US$40,000 (S$54,400) to US$60,000 (S$81,600). 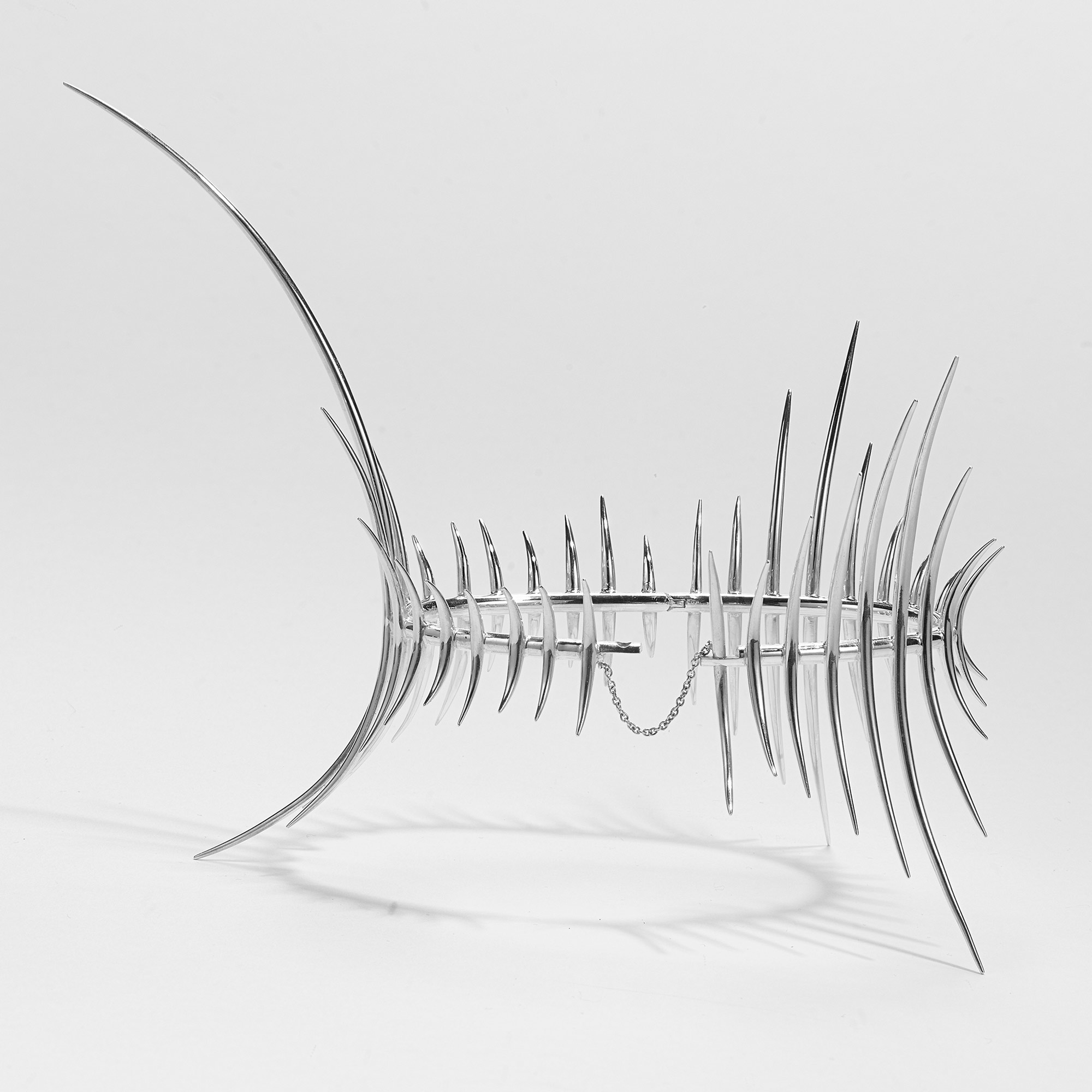 Curved spikes of silver resembling elephant tusks are festooned on this silver anklet, a replica of a piece designed for the late fashion maven Isabella Blow. The “tusks” are constructed in varying lengths for an eye-catching look. This jewel is poised to sell for between US$10,000 (S$13,600) to US$15,000 (S$20,400). 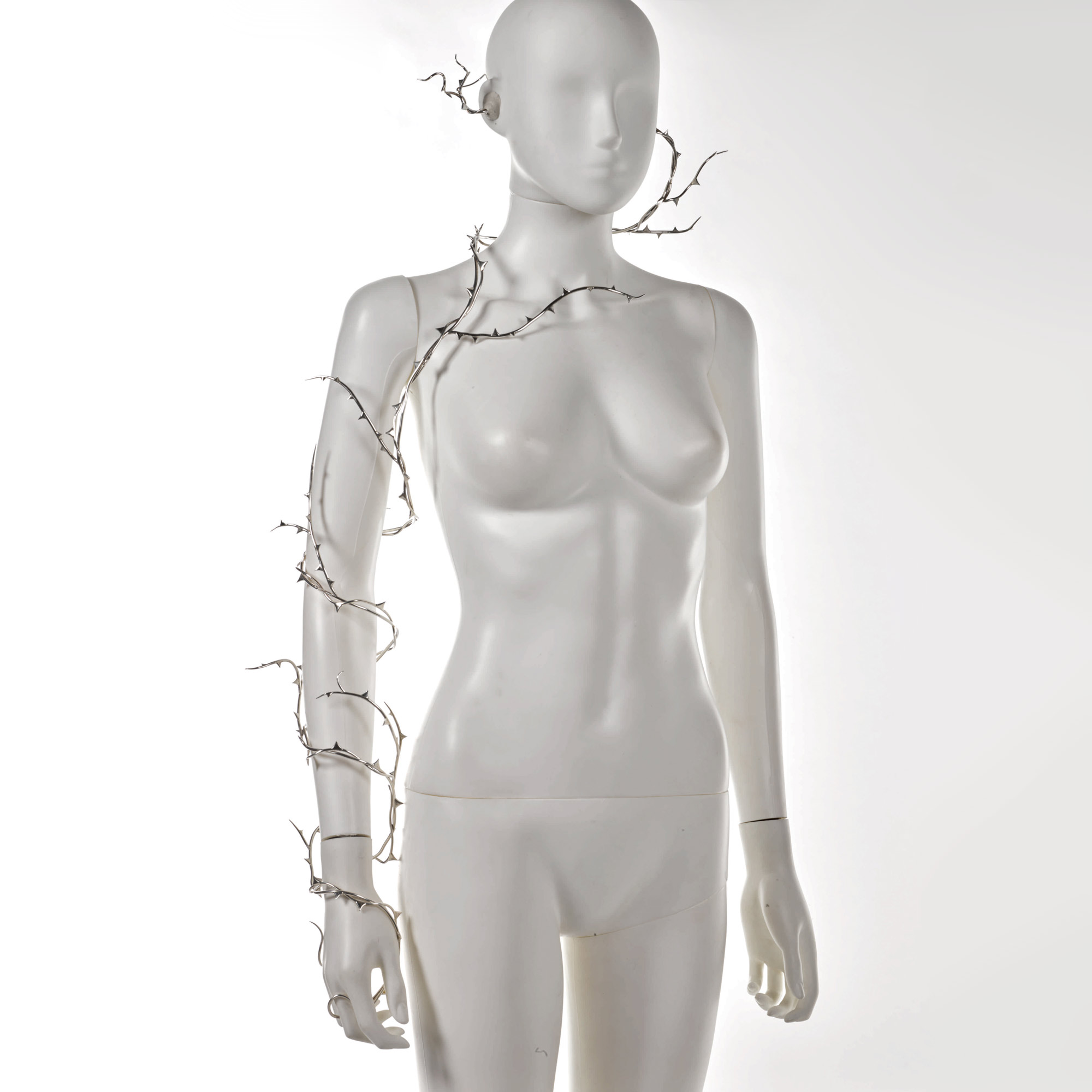 Intricate silver thorns forming a rose briar creep their way up the wearer’s arm, and wrap themselves around the shoulder. A separate piece, meant to be worn on the ear, makes it look as if the briar is passing through the wearer’s head. This gory imagery was inspired by the concept of nature “reclaiming the corpus after death”. Expect to fork out between US$30,000 (S$40,800) to US$50,000 (S$68,000) for this jewel. 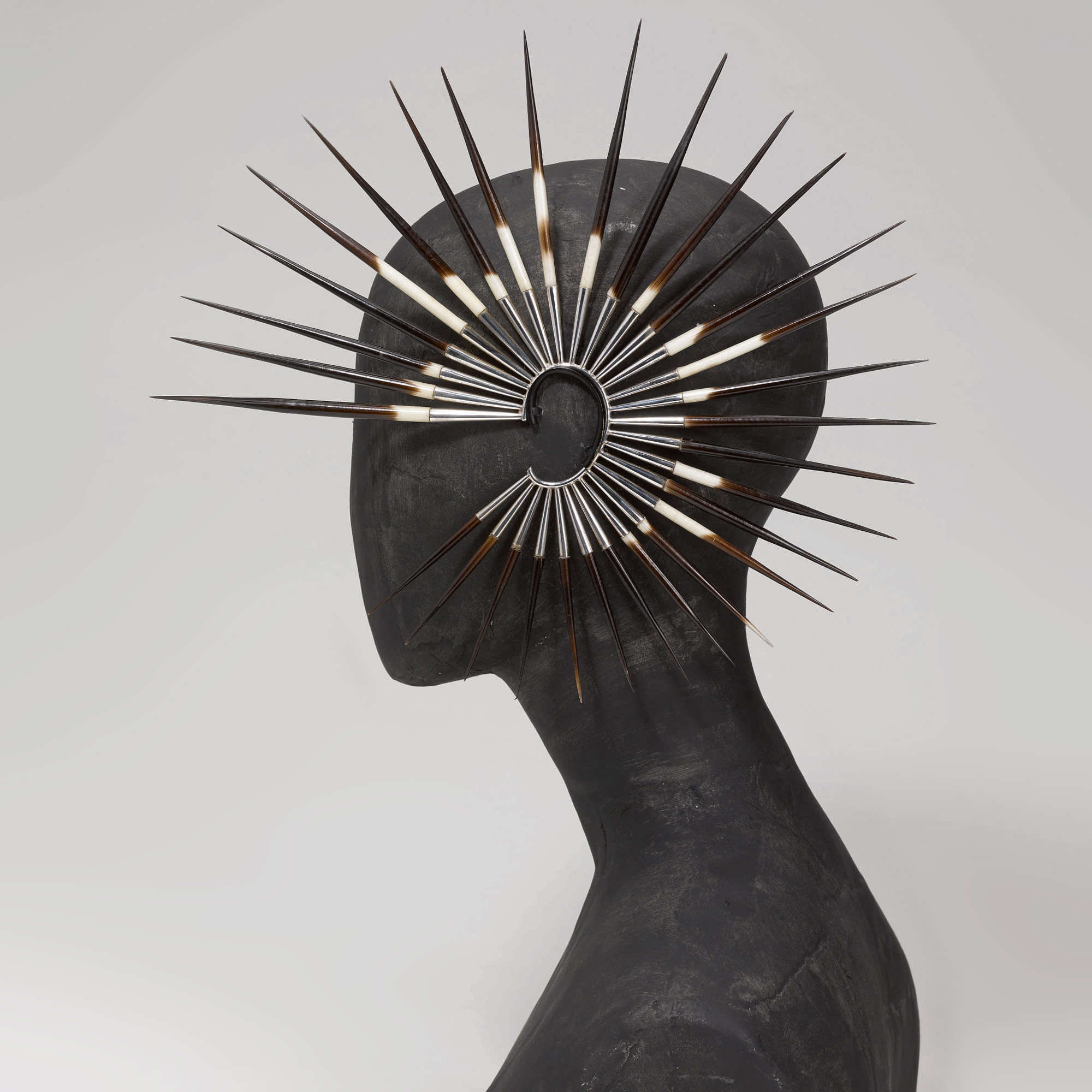 In 1995, Leane visited South Africa for a vacation and returned with a set of porcupine quills. He kept them for almost a full decade before coming up with an innovative way to incorporate them in jewellery, by cutting them in half and combining them with silver to form a pair of earrings. The jewels are worn around the ears, their spikes dramatically splaying outwards. Be prepared to part with between US$25,000 (S$34,000) and US$35,000 (S$47,600) for these prickly beauties. 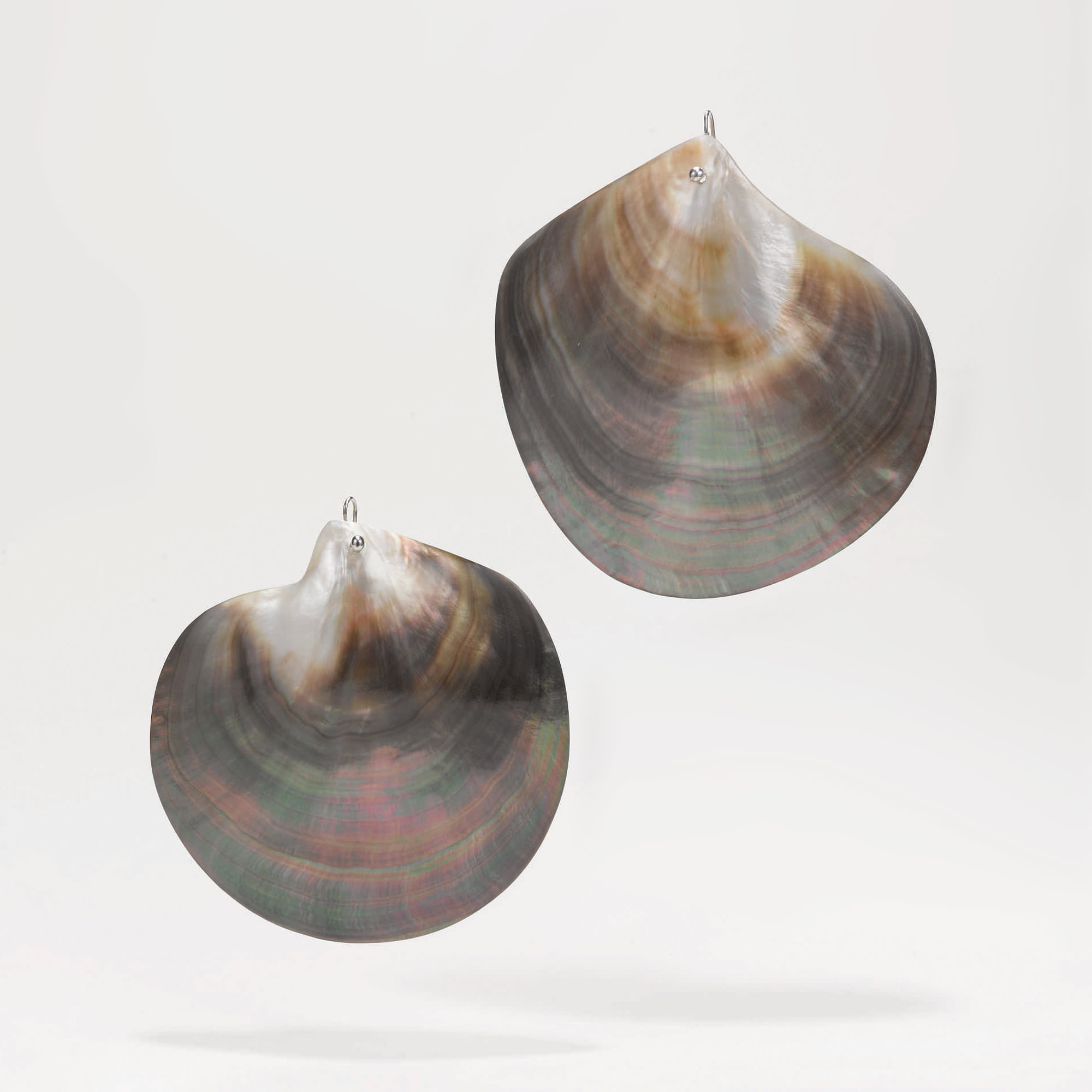 Using discarded Black Lipped oyster shells, Leane constructed this pair of simple but chic earrings. They were spotted on supermodel Kate Moss at McQueen’s Spring/Summer 2001 show, which also showcased Tahitian pearls and polished pieces of the shells in other designs. These earrings are expected to sell for between US$4,000 (S$5,440) to US$6,000 (S$8,160).