Spinel, the great “imposter” of gems, is making a grand comeback

Style
Spinel, the great “imposter” of gems, is making a grand comeback
Share this article
Next article

For years, a gemstone known as spinel has had a questionable reputation but in 2019, it is fast gaining ground as the next big gem in the market. Of late, local jewellers and high jewellery brands are featuring spinel alongside prestigious gems such as rubies, sapphires, emeralds and even diamonds.

To be fair, spinel has suffered an identity crisis in the past centuries. In the history of jewellery, spinels were often mislabelled as rubies as they share the same intense red colour and are often found in the same mines, fooling many royal jewellers. It’s little wonder they’ve been labelled as the great imposters in gemology.

Yet this trait has ironically proven to become its selling point. “People become fascinated by spinel as this ‘great imposter’ and become more drawn to the gem as a result,” says Maddy Barber, the founder-designer of Madly. Since the launch of her studio in 2014, Barber has been advocating the use of spinels in her creations.

“There are those who are looking for certain colours, and spinel carries many hues from soft pastels to steely blues. The ones that are very popular at Madly are the greys and pastel spinels,’ she adds.

“Unlike rubies and sapphires, which are usually heat-treated to enhance its colour, spinels’ colours are all natural. In comparison, spinels tend to be cleaner and less included, thus more sparkly.”

A one-carat spinel can be had for just S$500. But, as with most precious gems, colours are crucial in the pricing. Cobalt blue, ruby-red and neon pink — colours favoured by gem connoisseurs — can dramatically drive the price upwards of S$15,000 per carat.

Spinels are close cousins to rubies and sapphires, save from the addition of magnesium in its DNA. They are often found in mines rich with ruby and sapphire in Sri Lanka, Myanmar, Tanzania and Vietnam. Unless a laboratory test is conducted, the untrained eye would be hard pressed to tell spinels apart from its favoured counterparts. But, ponder on these gems long enough and one would discover its own unique sheen.

Michael Koh, founder and designer of Caratell, says: “Spinel possesses a good hardness which allows for daily wear and carries an excellent fire that is worth admiring. Also, it not in over-abundance like most quartzes and amethyst, making spinels a rare gem.”

In antiquity, spinel has been mistaken as a ruby and even made its way to historically important jewels. The best-known spinel is the Black Prince’s Ruby, a 170-carat irregular cabochon fronting the Imperial State Crown of England.

Today, jewellers are armed with a better understanding of spinels. More than just shunning the gems aside as ‘lesser rubies,’ some are embracing the unmatched qualities of red spinels. 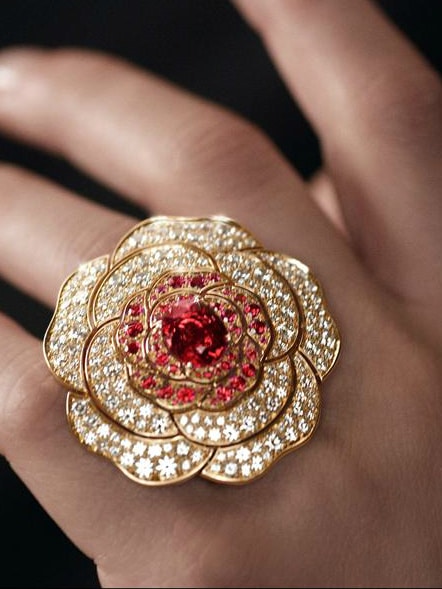 The soaring prices of diamonds have pushed many consumers over to the more attractive and diverse world of coloured gems. With that came a growing acceptance of spinels as well.

“Spinels are great for those who want something different (and bigger), yet no less rare than white diamonds,” says Barber.

Had there been qualms about using spinel in jewellery, they are usually resolved when clients take one look at it. “Many clients fall instantly in love with spinels the minute I show it to them, and the ones we have slowly amassed over the years are pretty spectacular. They are like my babies! In fact, more and more curious jewellery buyers have sought us out just to take a look at our varied spinel collection, so people are slowly but surely discovering the rare beauty and value of this long-overlooked historical gemstone,” Barber adds.

“Of course, there are still those who are determined to stick or stay safe with the traditional stones like emerald, sapphire or ruby for engagement rings and understandably so. But eventually, many do return to create future pieces with spinel because it’s hard to forget a stone with such an interesting history and there’s just something very special about this stone.”

If anyone’s looking to invest in gems, many jewellers stand by the rising value and opportunities with spinel.

“We have been promoting spinel for 14 years and we noticed in the past six years there’s a rise in demand for spinel. The price of spinel is on the rise too,” Koh says. “A good spinel with good colour and size is hard to come by, yet it is not as costly as ruby. There is a saying if life is fair, spinel should be worth more than ruby.”

Chanel Harry Winston Madly Gems spinel caratell madly
Jasmine Tay
Senior Writer
Jasmine Tay is the dining, culture and jewellery writer. She makes fine silver jewellery and causes mini-explosions in the kitchen when she can't afford fancy dinners. Sometimes she tells people what she thinks about art, and binges on the music of Danzig when they don’t agree.
Dining Culture Jewellery