So you thought the Grand Prix was reserved for blisteringly quick cars and superstar drivers?

Every year the panellists at The Foundation of the Grand Prix d’Horlogerie de Genève come together to have a serious chat about the one thing they know best — watches. More specifically, watches that have been submitted by brands hoping to win one of the most coveted titles in the industry.

The Grand Prix d’Horlogerie de Genève takes into consideration the diversity of timepieces, with categories that range from the obvious “Calendar”, “Chronograph” and “Tourbillon”, to the less common “Petite Aiguille” — a category for the best watch that costs less than CHF8,000 (S$11,200). “Mechanical Exception” takes into consideration watches with chiming complications, innovative display, or a groundbreaking mechanical feature, though really, the top “Aiguille d’Or” prize is the one everyone’s really gunning for.

Just like racing teams, some brands have more wall of fame real estate than the rest. Audemars Piguet leads the table with nine wins, while TAG Heuer and Vacheron Constantin trail behind with eight and seven wins respectively.

Before the winners are announced later this year, we played juror for a day and picked out a watch from each of the 12 categories we thought deserved to win. Whether manufactured by a storied house or thoughtfully made by independent watch enthusiasts, these watches are stellar both in form and function. Using traditional craftsmanship techniques from the Edo period, Unryuan — one of the world’s greatest lacquer studios in Wajima town, Japan — fuses the decadence of gold dust, gold leaves, turban shell and New Zealand abalone shell for this visual masterpiece. Themed “the scene in late autumn”, the dial sees ears of Japanese pampas grass in motion from the autumnal breeze. The theme continues at the back, as a hinged caseback also opens to reveal a dragonfly (nicknamed the “victory insect”) over ripples on water. The meticulously decorated in-house movement is crafted with the ancient Saiei-maki technique, using (more) gold leaves, black lacquer, and glass particles. If craftsmanship was anything to go by, this timepiece definitely nailed it. This is the brand’s first timepiece with a calendar function and it already has three patents pending on the movement’s mechanism. But Greubel Forsey never veers far from being extraordinary. Like many perpetual calendars, this watch features the usual information, except there’s now a “coded mechanical computer system” which relies on a set of cams that carry information respect to the length of different months and years. This allows the perpetual calendar to be set more efficiently through the crown instead of the usual pushers. At the back, the equation of time, season, solstice, and equinox display are also eligibly displayed alongside the movement. Having expanded from its storied jewelled eggs, Fabergé is now also in the business of watchmaking. Obviously they’ve been doing a pretty good job, thanks to the Visionnaire Chronograph’s unusual presentation. Unlike a typical chronograph, it does away with subdials. Instead, the elapsed time is read like the hours, minutes and seconds of a standard three-handed watch. The actual time can be read off the hour and minute hands on the periphery of the centre chronograph dial. Created by movement designer Agenhor, the new AgenGraph chronograph movement within provides a very adequate 60-hour power reserve. It’s hard to believe that this is the work of the storied Audemars Piguet, but the Swiss firm has injected a serious dose of hardcore cool to their ladies’ offering this year. This lethal-looking, diamond-encrusted spiky thing is the newest addition to the trilogy of haute joallerie pieces over the last three years. The cuff-styled timepiece is set with 65 carats worth of ice within a white gold case, and opening two sets of spikes — French window-style — will reveal an octagonal dial. The watch is powered by a calibre 2701 quartz movement, which is an otherwise lacklustre choice but we’re not even mad. Timekeeping isn’t the point here — the diamonds are. 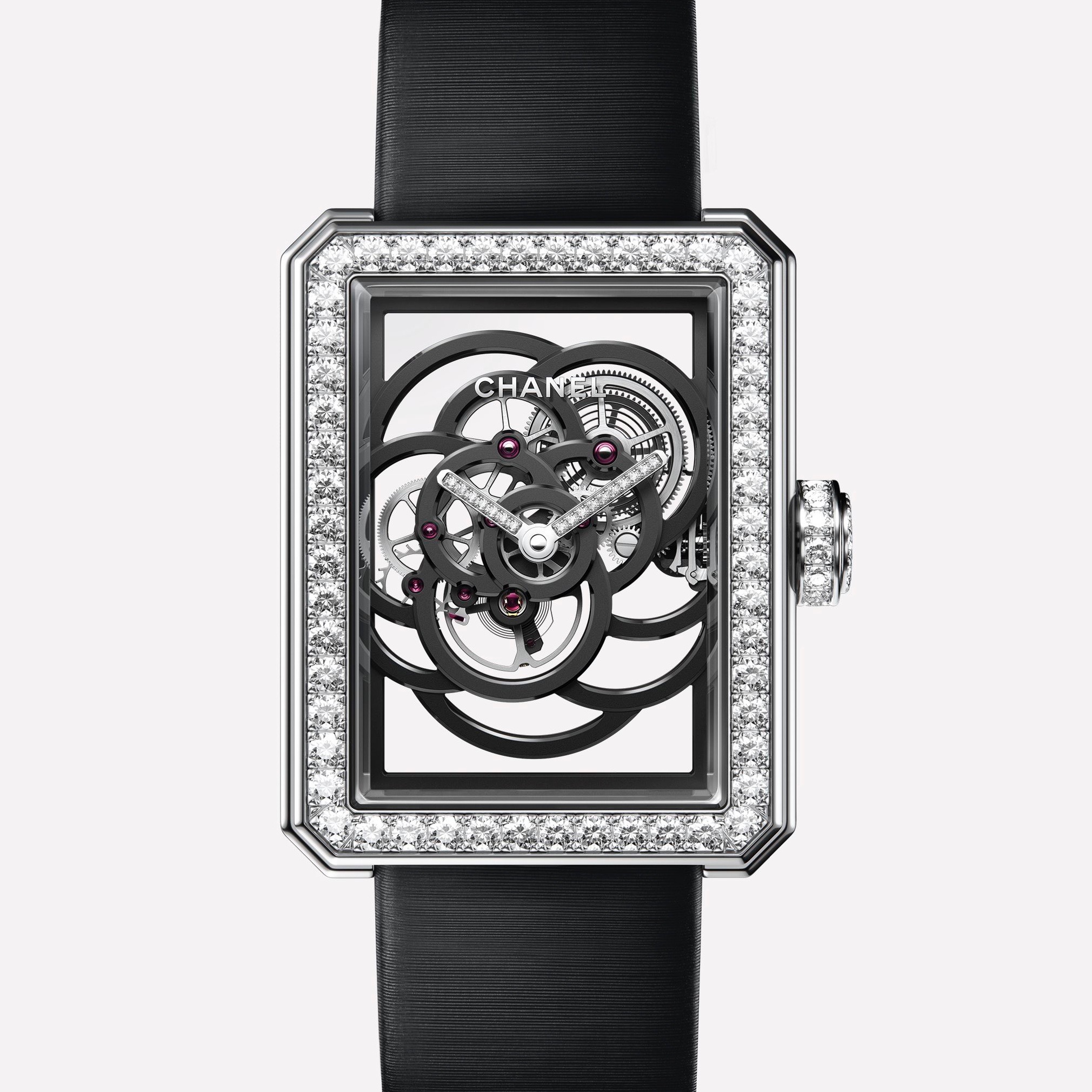 While men got a new wristwatch in the form of the Monsieur de Chanel when the first in-house mechanical Calibre 1 movement was introduced, the Calibre 2 will make its debut in the Première, a time-tested silhouette first launched 30 years ago. You’ll recognise the case’s octagonal shape immediately — it’s inspired by the famous Place Vendome after all — though it’s now iced up with 92 brilliant-cut diamonds and 4 baguette-cut ones. The bridges of the skeleton movement within form a camellia flower (Coco’s favourite), and the mechanical team had the mammoth task of sizing the mainspring barrel, gear train and balance wheel to fit perfectly within the petals. There are few things as poetic as the concept of time, and Van Cleef & Arpels is expert at expressing this romance. Beyond the enchanting facade, the Papillon Automate watch tells a story of the unpredictability and intimacy of nature. As the star of the timepiece, the butterfly gently flutters its wings at random depending on the power reserve, though this spectacle can be triggered via the pusher. Set against a bejewelled pastoral backdrop, mother-of-pearl flowers and three-dimensional blades of grass, this timepiece combines on-demand animation with incredible artisan craftsmanship. 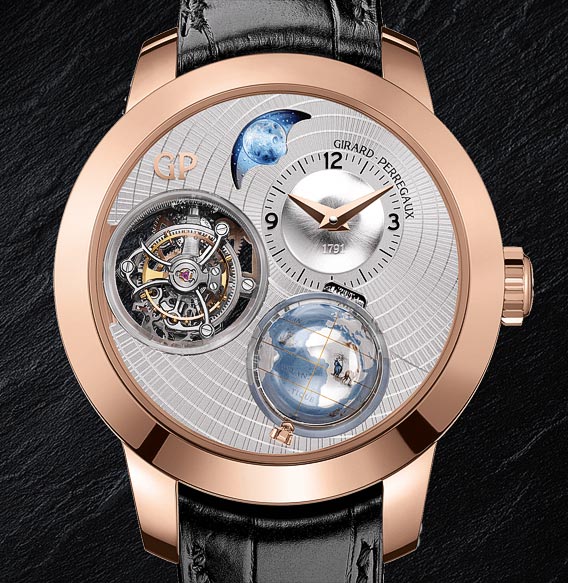 The Tri-axial tourbillon gets a suitably haute update this year, in the form of a globe. Within its decadent but rather large 48mm rose gold case sits a gravity-defying, high-speed tourbillon that’s equipped with a regulator operating on three rotation axes instead of one. Two astronomical complications join this complex symphony: a hand-painted globe rotating at real time and a moon phase indicator that would outlive you in terms of accuracy. The curious timepiece also provides a crystal aperture on the side for you to admire the tourbillon with. The respectable and hand-crafted Manufacture GP09310-0001 calibre with a 70-hour power reserve powers this watch. Freshly updated for the year, the latest Lange 1 iteration gets a new base movement, as well as a moon phase complication that now includes a day/night indicator too. Two discs form the complication: one that carries the moon, and another behind it that rotates once every 24 hours. The latter depicts the sky via a gold disc that’s painted a gradient of vibrant blues — from robin’s egg to midnight — and speckled with gold stars, so the curved moon stands out even more. The in-house manufactured calibre L 121.3 provides 72 hours worth of juice and a lot of visual impact with its seamless finishing and architecture. 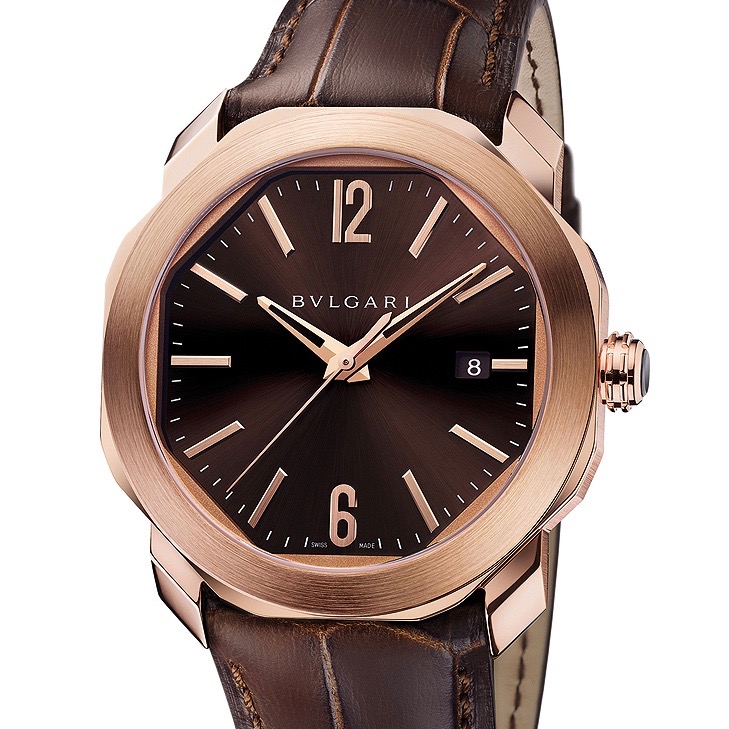 The latest addition to the Octo collection stays very much true to Bulgari’s take on a classic time-and-date watch, albeit with new design features and a slightly different case. The 41mm watch now has an octagonal case that’s more rounded and less architectural than its predecessors. The simple three-hand and date layout is accented only by a date window classically displayed at 3 o’clock. This year, the Octo receives a brown dial that’s created in-house via a multi-layer varnish technique that’s similar to how car panels are painted. The calibre BVL 191 automatic movement within operates at a modern 4Hz with two days of power reserve, which is pretty decent for a timepiece that offers the best of both worlds — comfort and versatility. 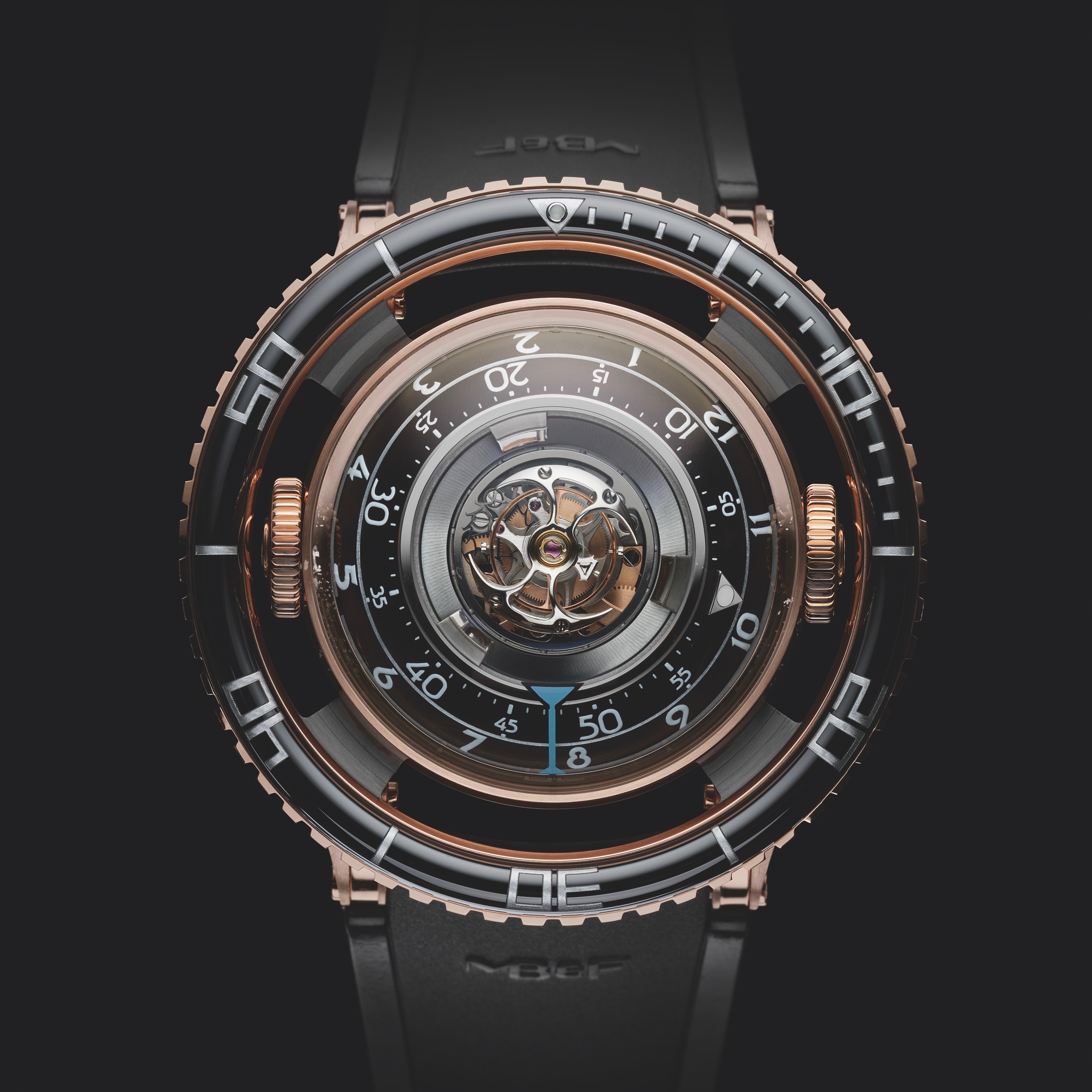 Trust MB&F to make a dive watch look like a contraption from a Star Trek movie. Even though it’s a more “traditional” round shape, founder Maximillian Büsser still found a way to make it extraordinary. Inspired by the anatomy of a jellyfish, the Aquapod houses a flying tourbillon under a high domed crystal in the centre. Concentric circles that radiate out indicate the hours and minutes. At 53.8mm, this isn’t the most convenient timepiece for your deep sea adventures, but should you take a chance with it, you’ll witness first hand the stunning panels of glow-in-the-dark “Ambient Glow Technology” luminescent material the brand is now famous for. 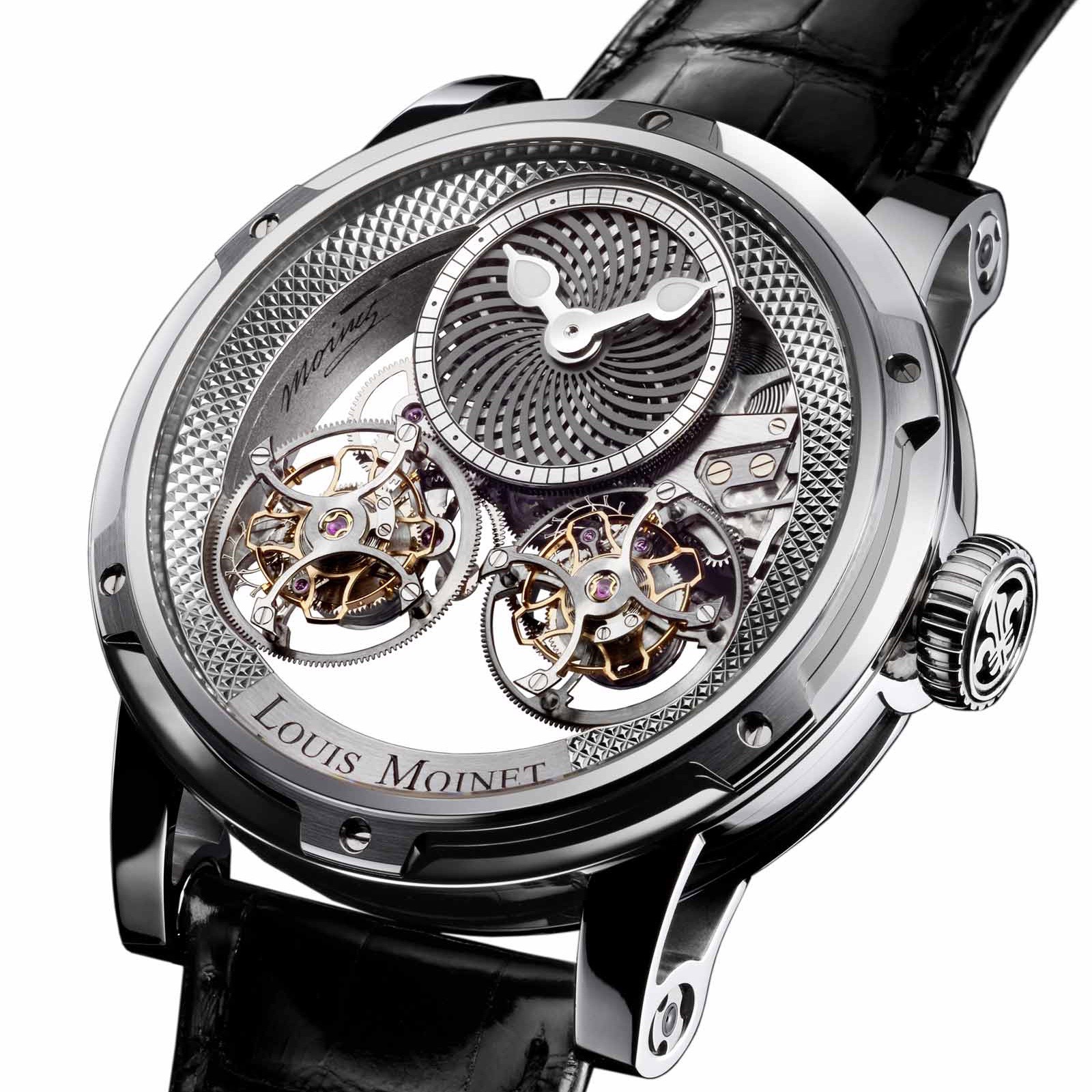 Wrenching your gaze away from the two inverted tourbillons that seemingly float in the timepiece is hard, but there’s more eye candy on this mesmerising watch. The off-centred dial sees a kaleidoscopic effect produced by two open-worked discs that rotate in opposite directions beneath the elliptical openwork dial. The resulting optical illusion is one that sees the dial collapse into a point of infinity centred on the hands’ axis. Despite energy losses in keeping all the parts moving, the mechanical calibre within provides a 56-hour power reserve. It’s easy to recognise the iconic knurled bezel on this 42mm red gold case. This Toric watch see its key features stand out legibly against the grained white dial, with javelin-shaped hands that indicate the main time zone and more discreet rhodium-plated ones for the second time zone. Underneath, the self-winding calibre PF317 governs the second time zone via a module that’s indexed to the main movement. As a visual treat, the small Swiss firm has also included an instant retrograde calendar to the mix, which resets back to its original position so fast that it cannot be seen with the naked eye. As a dual time zone watch, two locations can be paired and are both correct to the nearest minute. Even locations with a half-hour or quarter-hour difference can be paired with full hour times set from the Greenwich meridian.