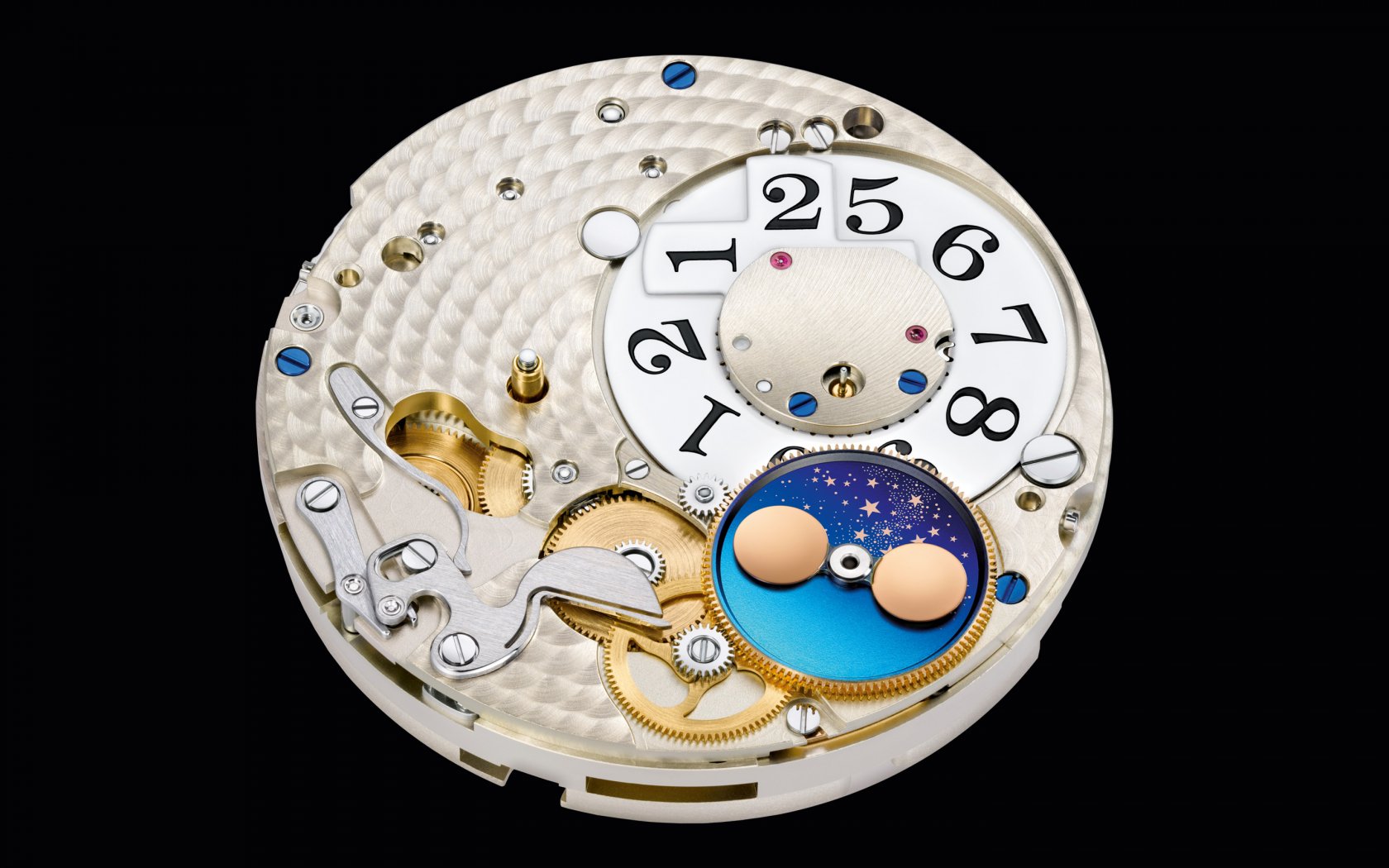 We previously highlighted wrist candies from the likes of Richard Mille, Cartier and Audemars Piguet.  But while the rest of the horological world wait with bated breath to know what else is on offer, we want you to be way ahead of the game. Which is why we’ve uncovered six more watch masterpieces that you can look forward to at the 27th edition.

Held from 16 to 20 January, SIHH 2017 will also feature newcomers such as independent workshops and artisan watchmakers, a first for the annual event organised by the Richemont Group . 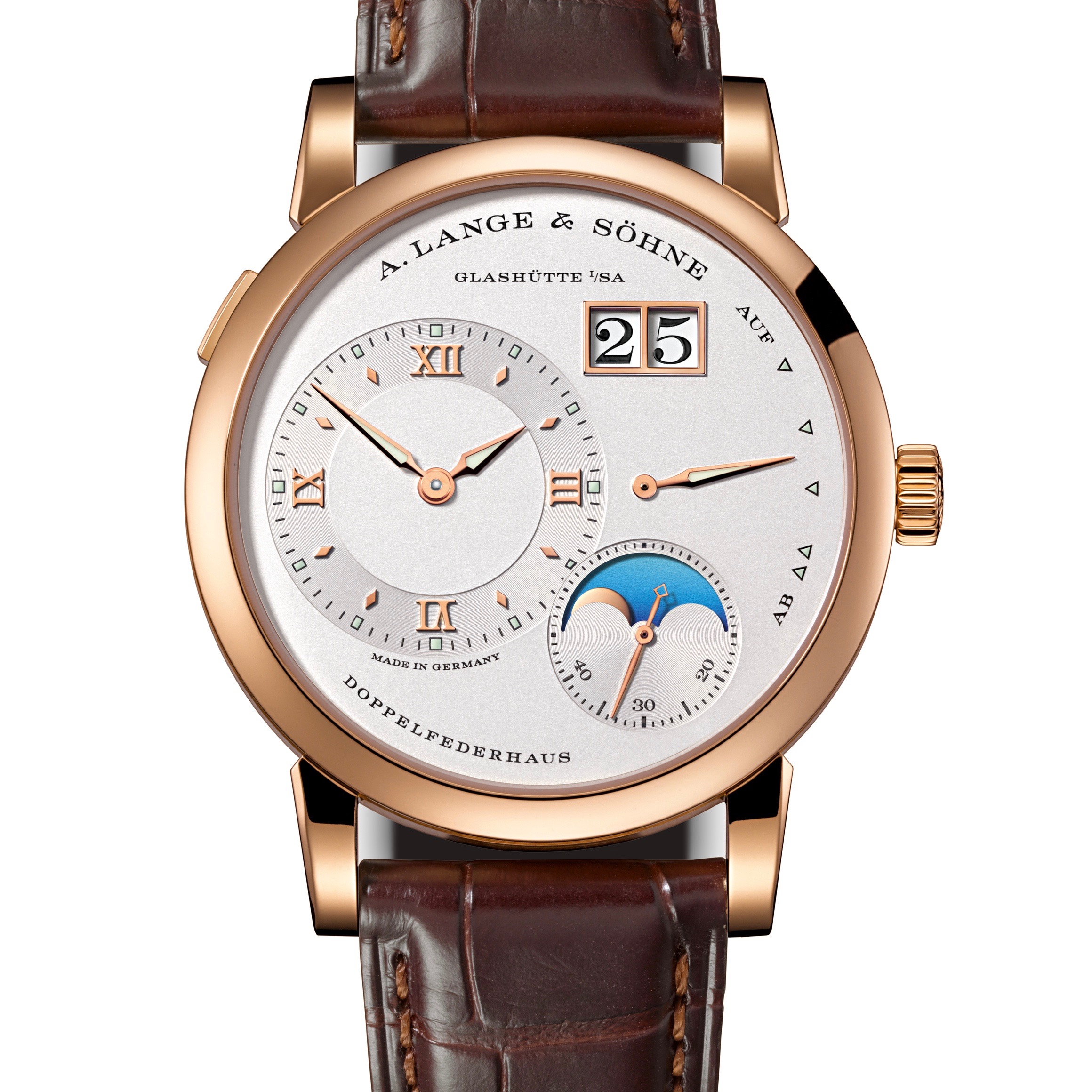 Thanks to a seven-gear transmission, this timepiece’s precision will outlast your life — and by quite a fair bit. Requiring an adjustment of only one day every 122.6 years instead of the feeble 2.5 years as with most moon-phase watches, this Glashutte-based timepiece is ingenious in that the moon display and hour-wheel continuum are linked. This tracks the moon’s orbitals in increments so slight, they’re not visible to the naked eye. Treated with a patented coating process to create a vibrant blue hue, the 18k gold lunar disk is home to more than 300 stars of various sizes, each laser-cut for — once again — precision. The new Lange 1 Moon Phase is available in three case variations — white gold, pink gold and platinum, priced between S$59,500 to S$78,300. 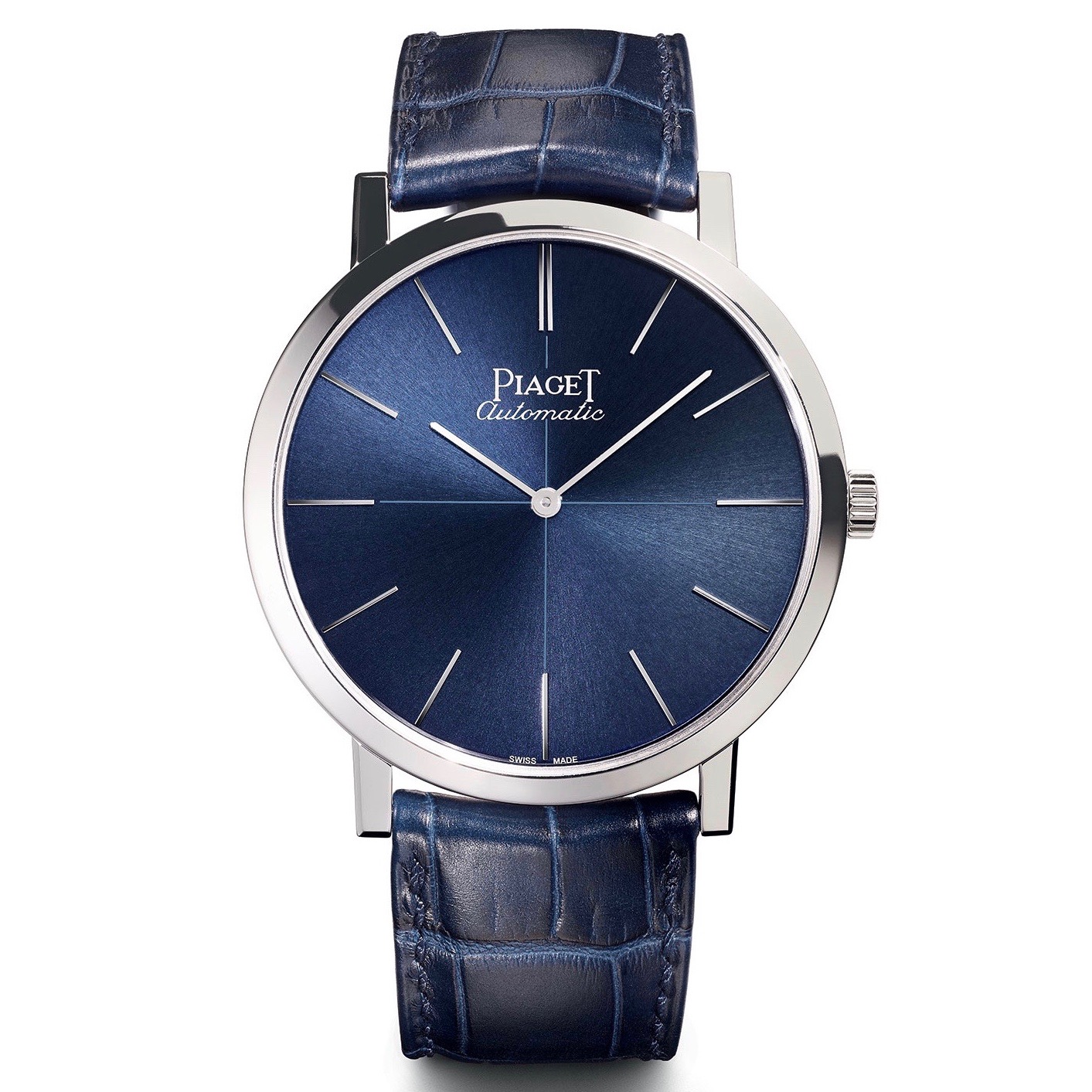 Sixty years after the the launch of one of the brand’s biggest horological achievements, the slim calibre 9P — one of the thinnest movements ever created — Piaget marks this milestone with a pair of watches inspired by their earliest predecessors. Simple and very minimalistic, the dial is kept unfettered with only baton hands, hour markers and a subtle crosshair in the centre. Instead of printed baton hands previously, these are 18k white gold. Inside, however is where the biggest difference lies. The 43mm version is powered by the very slim calibre 1200P, an automatic movement at only 2.35mm high. The 38mm version, on the other hand, is manually wound with the calibre 430P, an even slimmer 2.1mm movement with a 43-hour power reserve. The former is a limited edition of 360 pieces with a price tag of S$35,000, while the latter will see 480 pieces at S$25,000 each. 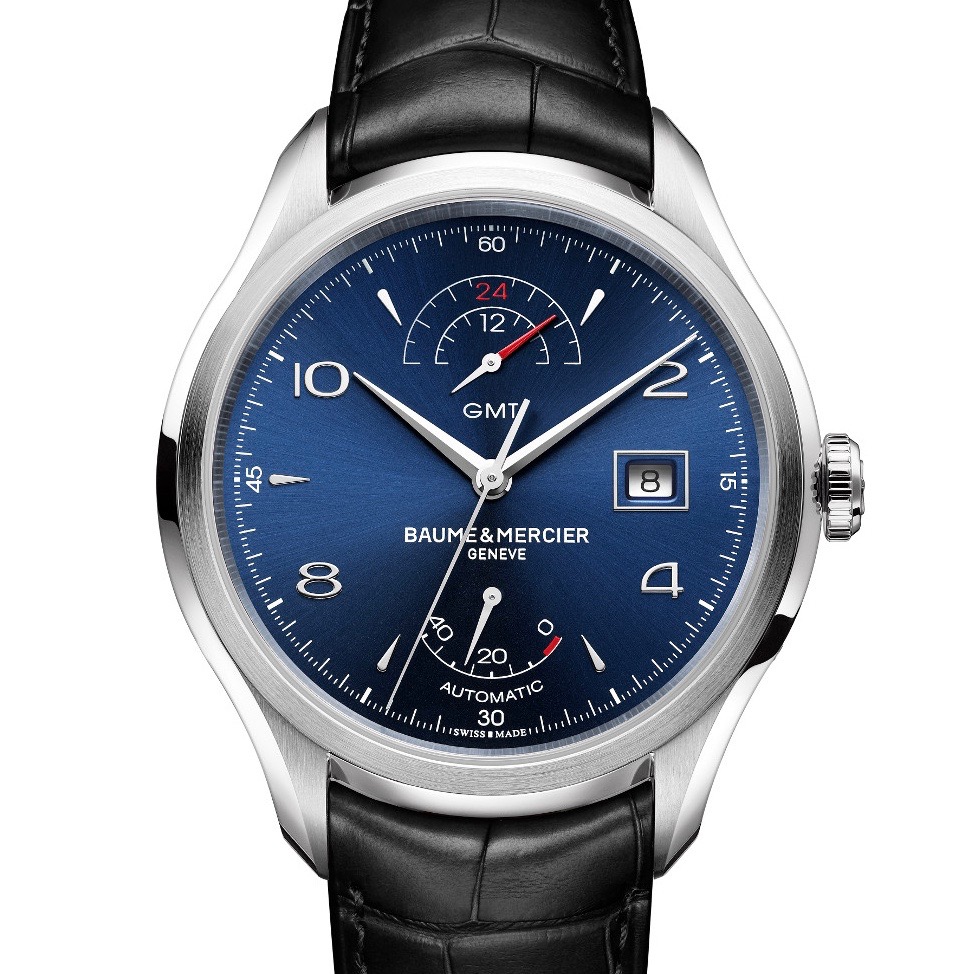 As one of Baume & Mercier’s flagships, it’s no surprise that the Swiss luxury watchmaker has decided on yet another iteration of the classic timepiece. This time however, it features a nifty complication that will sit well with frequent  travellers — a dual time indicator. And it might be placed at the very 12 o’clock position, but the complication provides symmetry, alongside the power reserve indicator at the 6 o’clock. On its dial, a brilliant satin-fished blue sunburst design provide contrast to the rhodium triangular hands display and Arabic numeral and indices, providing legibility for even the most weary of jetsetters. The Soprod 9035 movement within gets this automatic timepiece ticking with a healthy power reserve of 42 hours. 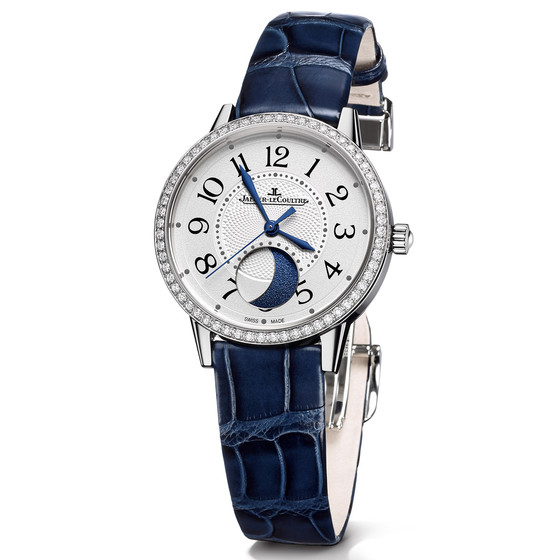 Jaeger-LeCoultre isn’t stranger to creating objects of desire. Fans of the storied Swiss watch manufacturer will know that moon phases were only reserved for the brand’s finest jewellery pieces, so this is a pretty big deal for the Rendez-Vous collection. If you liked the dainty sophistication of the series previously, you’ll fall in love with this one. With a time lag of only one day every 985 years, the iconic moon phase function is placed on a finely worked guilloche dial, its glistening moon given a sandy finish to visual interest to the brilliant diamond-encrusted watch. There’s now also a hand indicating the seconds dial — a subtle addition to the time-tested timepiece. Concocted in varying combinations of copper and tin, bronze is not only extremely durable, but has been popular in the watchmaking industry for its anti-magnetic and corrosion-resistance properties. Now, Montblanc brings the warm, vintage-looking alloy to its 1858 collection, a tribute to Minerva’s specialty (now part of Montblanc) 1930s pilot watches. Inside the same 44mm case is a manually-wound, monopusher, column-wheel chronograph gold-plated movement that might be technically “old school” but has been heralded one of the top five chronograph movements ever. On the dial of this huge watch sits gold hands and indexes with a cream “faux patina” paint for a retro, monochromatic look. This watch is slated to be a limited edition of 100 pieces at S$41,400 — a bargain considering the excellent movement and workmanship. 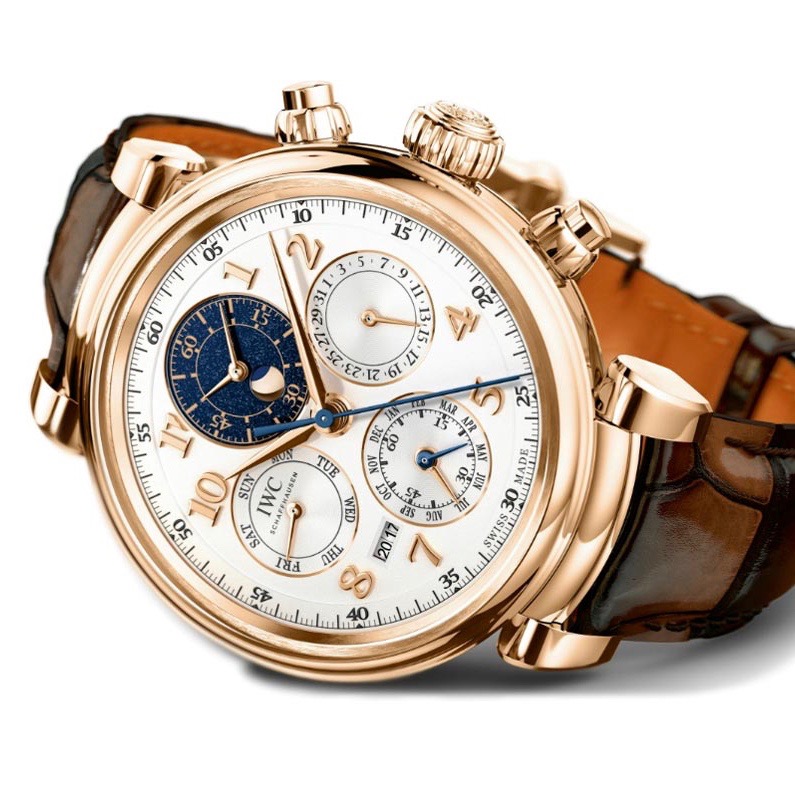 First presented in 1985, the IWC Da Vinci Perpetual Calendar was in the upper echelons of watchmaking standards. For SIHH next year, the Swiss firm has revisited the entire Da Vinci archives for a brand new collection, and the result is a stunning Da Vinci Perpetual Calendar Chronograph, a round-cased timepiece that combines two of the most loved complications in the world of horology. Despite being busy, the dial offers great legibility. You’ll get loads of information off this watch: three sub-dials at 3, 6 and 9 o’clock tell the date, month and day respectively and at 8 o’clock, a year display. As a perpetual calendar, the differing lengths of months and leap years are taking into consideration for accuracy. Inside, the in-house manufactured Calibre 89630 powers the  watch at 4Hz and 68 hours of power reserve.

Culture
Europe’s museums are putting up digital guided tours and workshops
Style
10 vegan fashion items to add to your cruelty-free closet
Culture
The most gripping true crime documentaries on Netflix to watch now
Culture
We asked a tarot reader for messages of growth amidst a global pandemic
Food & Drink
Odette, Asia’s reigning best restaurant can now be enjoyed at home
Living
Singapore, how did we fail our migrant workers?
Culture
The pink supermoon, WhatsApp limits message forwarding and more good news you deserve
Style
A look at Sergio Rossi’s iconic shoes, from the Opanca sandals to his Versace pumps
Food & Drink
William Grant & Sons to launch the very first virtual bar in Singapore
Sign up for our newsletters to have the latest stories delivered straight to your inbox every week.