Channel sophistication and grace with these mother-of-pearl watches

Like the jewellery industry, the horological sphere isn’t stranger to the use of mother-of-pearl. The exotic material — derived from the inner shell layer of molluscs — is well-loved for not only being strong and resilient, but also for its iridescent sheen, exuding a charming old-world glamour that few others can mimic.

Despite the high level of workmanship — and hence, cost — involved, mother-of-pearl remains to be one of the most covetable dial options when it comes to women’s watches. Here, we seek out the best mother-of-pearl watches that’ll add grace and sophistication to your ensemble today. The OmegaConstellation Manhattan has become a mainstay in the world of women’s watches since its launch in 1982 for obvious reasons; equal parts sophisticated and functional, the timepiece has the rare ability to take its user from work to after-dark activities effortlessly.

Besides an even more slender bezel, the new watch’s signature claws have also been slimmed to be integrated more smoothly with the case. The crown’s ridges see half-moon detailing which reflects the case’s expertly-cut facets, and the bracelet’s clasp now comes with a handy adjustable release.

At the centre of it all, however is a stellar mother-of-pearl dial, whose iridescenceis bolstered by snow-paved diamonds throughout the timepiece. The baguette-cut blue sapphires — inspired by the Manhattan skyline — further the cause with its brilliant contrast, making this the everyday watch you should aspire to own. Breguet’s affinity with the seas isn’t limited to its impeccable array of marine watches; the French manufacturer has chosen to express its heritage with a slightly different twist this year instead. Named the Classique Dame 9065, the timepiece marries Breguet’s timeless silhouette with a Tahitian black mother-of-pearl dial and brilliant cut diamonds instead.

The exotic dial is derived from black-lipped oysters found around Tahiti and the French Polynesian islands, and is much rarer than the usual white counterparts. Look closely and you’ll find that its visual complexity as well as the subtle hints of marine hues lend an uncanny resemblance to the ocean when viewed from above.

Available in a limited edition of 28 pieces, the 33.5mm-wide watch is kept slender with an ultra-thin movement, and dainty pommehands and Breguet-style numerals. A tiny heart-shaped counterweight on the seconds hand not only matches the ruby cabochon and red date window, but also gives the watch a precious twist. Inspired by Harry Winston’s popular Lotus Cluster fine jewellery collection, the Premier Lotus timepiece captures the allure of the aquatic floral with the firm’s signature clustering technique. Here, the iridescent material is celebrated in all its glory by utilising different tones for each of the petals.

The rich, kaleidoscopic scene is then enhanced by martelé white gold and 58 brilliant-cut and seven marquise-cut diamonds, creating an intriguing play on colour, light, and volume. Inside, Harry Winston demonstrates the same level of craftsmanship with the high-end caliber HW2010, which is visible from its sapphire case back. Blancpain might be a master in complications but femininity takes centre stage here. The Quantième Rétrograde sees a pristine mother-of-pearl dial that’s adorned with extraordinary details. The starry moon-phase indication is a whimsical accompaniment to the star-tipped serpentine retrograde hand, which travels across the top half of the dial to indicate the day of the month, before returning back to the start to begin its journey again.

In keeping the watch legible despite all the complications, time is indicated via a subdial at six o’clock. The brand’s contemporary spirit continues with its automatic movement, the calibre 2650RL, which provides a healthy 65 hours of power reserve. The romanticism is then further elevated with a diamond-encrusted bezel and crown. 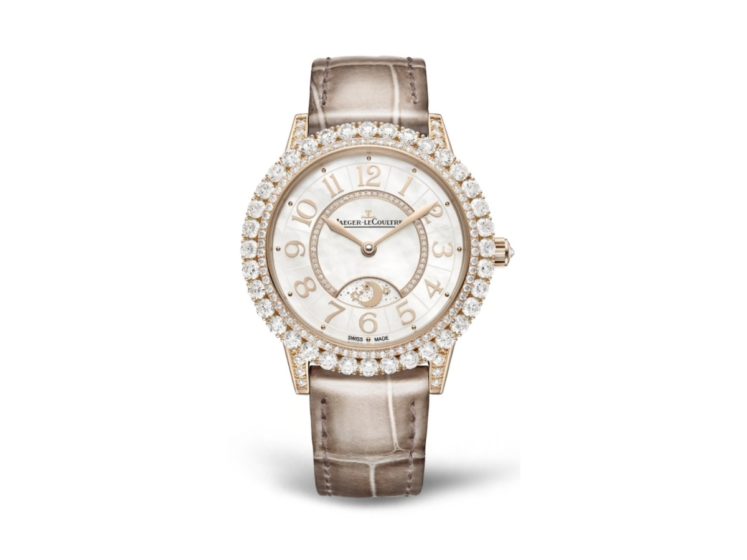 First launched in 2012 to resounding success, Jaeger-LeCoultre’s Rendez-Vous collection has amassed over 40 variations to the theme, but few shine brighter than this one. The Dazzling Rendez-Vous Night & Day watch is a bold expression of the brand’s dedication to craftsmanship, especially since it’s employed several gem-setting techniques to ensure the timepiece lives up to its name.

Here, rows of brilliant-cut diamonds flank the white mother-of-pearl dial, which is in turn adorned with floral numerals and matching pink gold hands. A day/night indicator adds a slight bit of functionality to this jewellery watch, which will no doubt find its place in even the most formal of events.

Style Watches Luxury Timepieces Mother Of Pearl
Shatricia Nair
Managing Editor
Shatricia Nair is a motoring, watches, and wellness writer who is perpetually knee-deep in the world of V8s, tourbillons, and the latest fitness trends. She is fuelled by peanut butter and three cups of coffee a day.
Motoring Wellness Watches Beauty Style