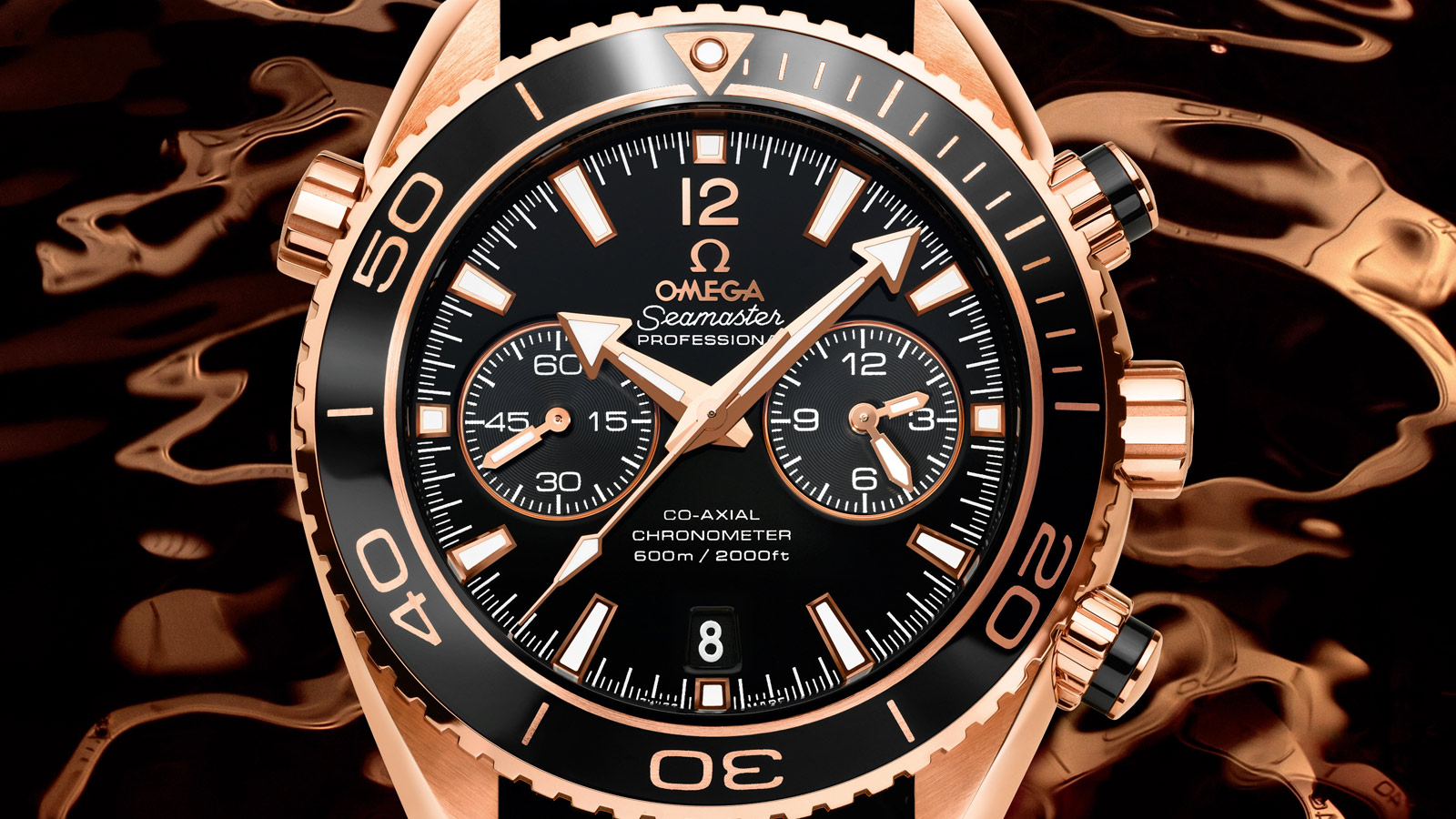 Dive deep: 5 watches to take the plunge with

Style
Dive deep: 5 watches to take the plunge with
Share this article
Next article

Equally at home with a sleek three-piece suit as with bulky scuba gear, dive watches are among the most eye-catching and practical timepieces a man can own. Their purpose is fairly self-explanatory — to monitor how long a diver has been underwater and how much air he has left in his tank.

Of course, not all of us are quite as adventurous in our aquatic endeavours, but this hasn’t stopped dive watches from their overwhelming popularity. Typically larger in size with a rotating bezel, these utilitarian timepieces rest on a rubber strap or metal bracelet. They must also have a water resistance of at least 100m, while the more expensive ones can take you way further south.

A quality dive watch is always an investment and an heirloom-potential piece, so we’ve scouted five seriously good looking and iconic ones for you to take the plunge with. 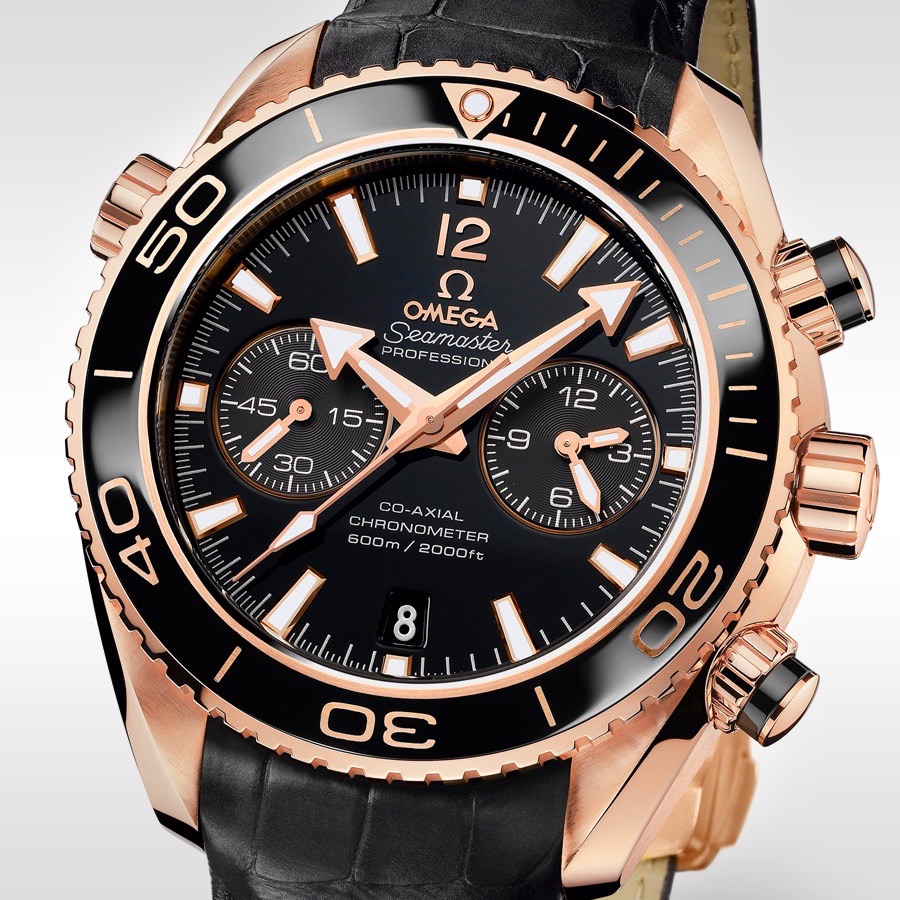 Originally introduced in 1947, it’s no trade secret that Omega’s Seamaster model boasts a rich maritime legacy. It wasn’t till much later in 2003 that the Planet Ocean was launched, a beefy dive watch that had water resistance of up to 600m. It was also the first Seamaster to be equipped with features such as ceramic and LiquidMetal bezels and the in-house Omega 8500 calibre.

So when Omega developed the Ceragold technology — a process which insets gold into the engraved ceramic bezel — it was only fitting the Planet Ocean received the gilded makeover, with 18k red gold no less. Its black ceramic dial sees a small seconds sub-dial as well as 60-minute and 12-hour counters. Inside the 45.5mm timepiece lies the Omega 9301 calibre, a self-winding chronograph movement with a column wheel mechanism — one that requires great precision in design and build, and is characterised by its smooth and quick response. This fancy version will set you back by S$43,000. 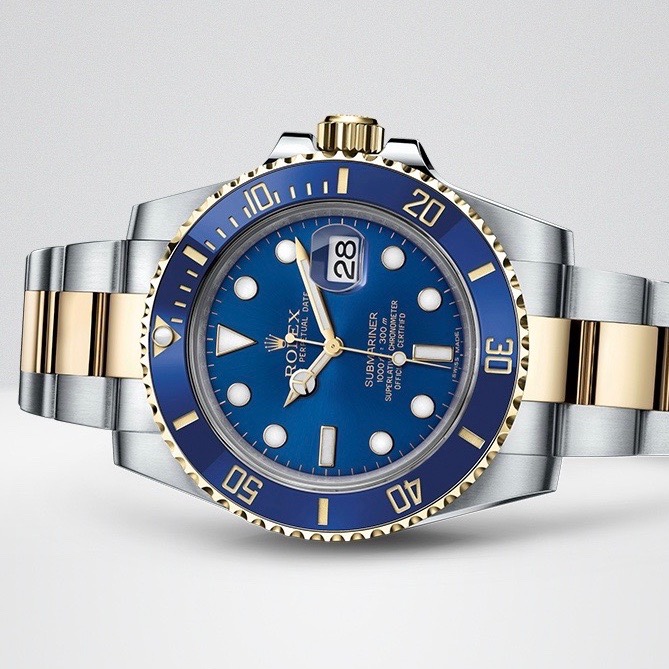 Robust and functional, the Rolex Submariner has been a definitive dive watch since it was introduced almost 60 years ago. With its ceramic bezel, solid bracelet and distinctive dial — encircled with large luminescent hour markers — the Submariner meets the requirements of a modern day watch while being extremely true to its original function.

Now, this diving legend sheds its sombre facade for a pop of blue and gold. Characterised by hour markers fashioned from 18k gold, each Submariner is meticulously hand-assembled in-house, and this attention to detail extends to its movement. The self-winding mechanical calibre 3135 has all the Swiss certifications that promise excellence. Its unidirectional rotatable Cerachrom bezel’s engraved 60-minute graduations allow divers to accurately and safely monitor diving time, and is submersible to a depth of 300m. Priced at a hefty S$16,624, but we’re talking about a legendary timepiece here. 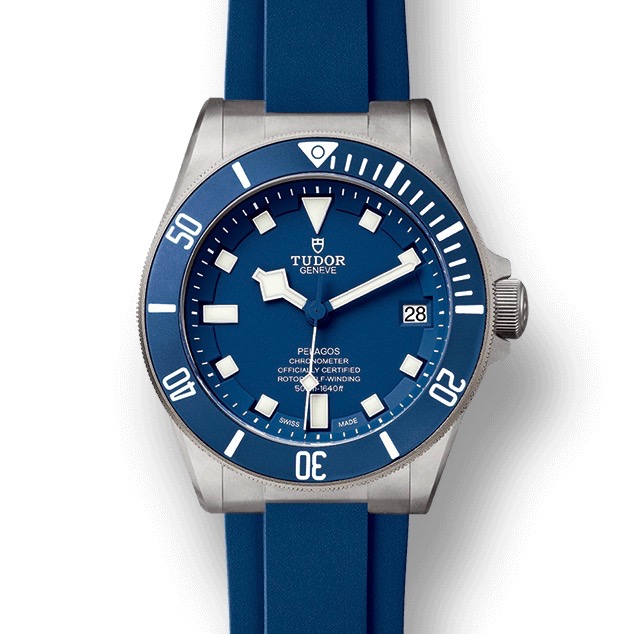 Tudor might be owned entirely by Rolex, but its movements were produced and assembled separately via ETA. That is, until last year, when the Swiss watch company finally surprised the horological industry with its own movement: the Tudor calibre MT5612. This is set to replace the previous ETA2824-2 automatic movement in the 42mm Pelagos. Did we mention this movement is COSC-certified? Fcaade-wise, the Pelagos sees the same brushed titanium case and patented expansion-style bracelet clasp.

Tudor even thoughtfully made a version of the Pelagos for left-handers; both versions are water resistant to a depth of 500m. Showing the hours, minutes, seconds and an instantly jumping date, the Pelagos — reasonably priced at S$6,080 — is a practical choice for anyone, even if you don’t even fancy swimming, much less diving. 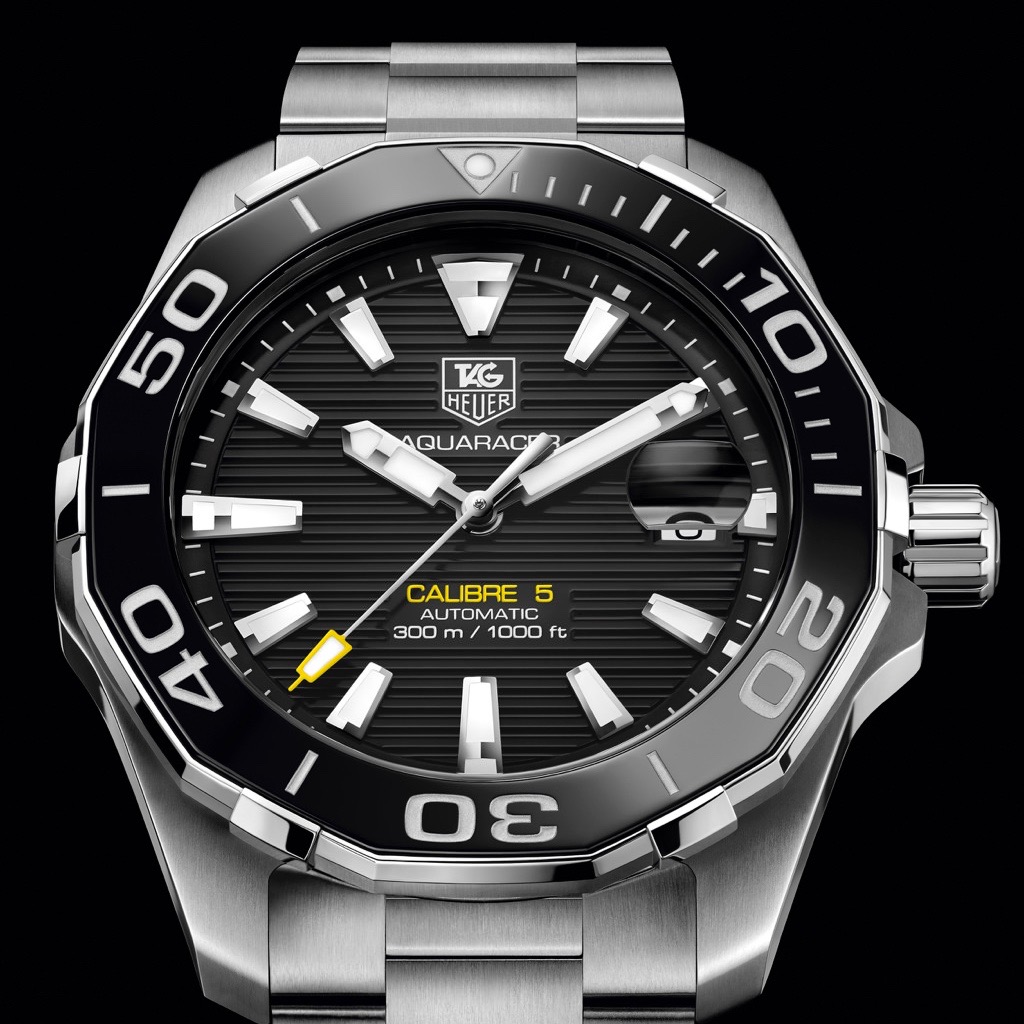 Designed to withstand the demanding requirements of any water sport, it comes as no surprise that TAG Heuer’s Aquaracer boasts a 300m dive capacity, and is fully water and shock resistant. So like its iconic marketing campaign promises, you don’t crack under pressure. The new model shares many elements with the first Aquaracer 300m Calibre 5 version launched in 2014, but the ceramic bezel gives this latest version a sportier feel compared to the brushed steel one. The larger hour-markers dominate the dial with an “ultra shine” finish, while the bigger hands provide extra legibility. In the dark the exaggerated hour-markers glow magnificently with plenty of lume in shades of green and blue. Priced from S$3,460, depending on strap options. 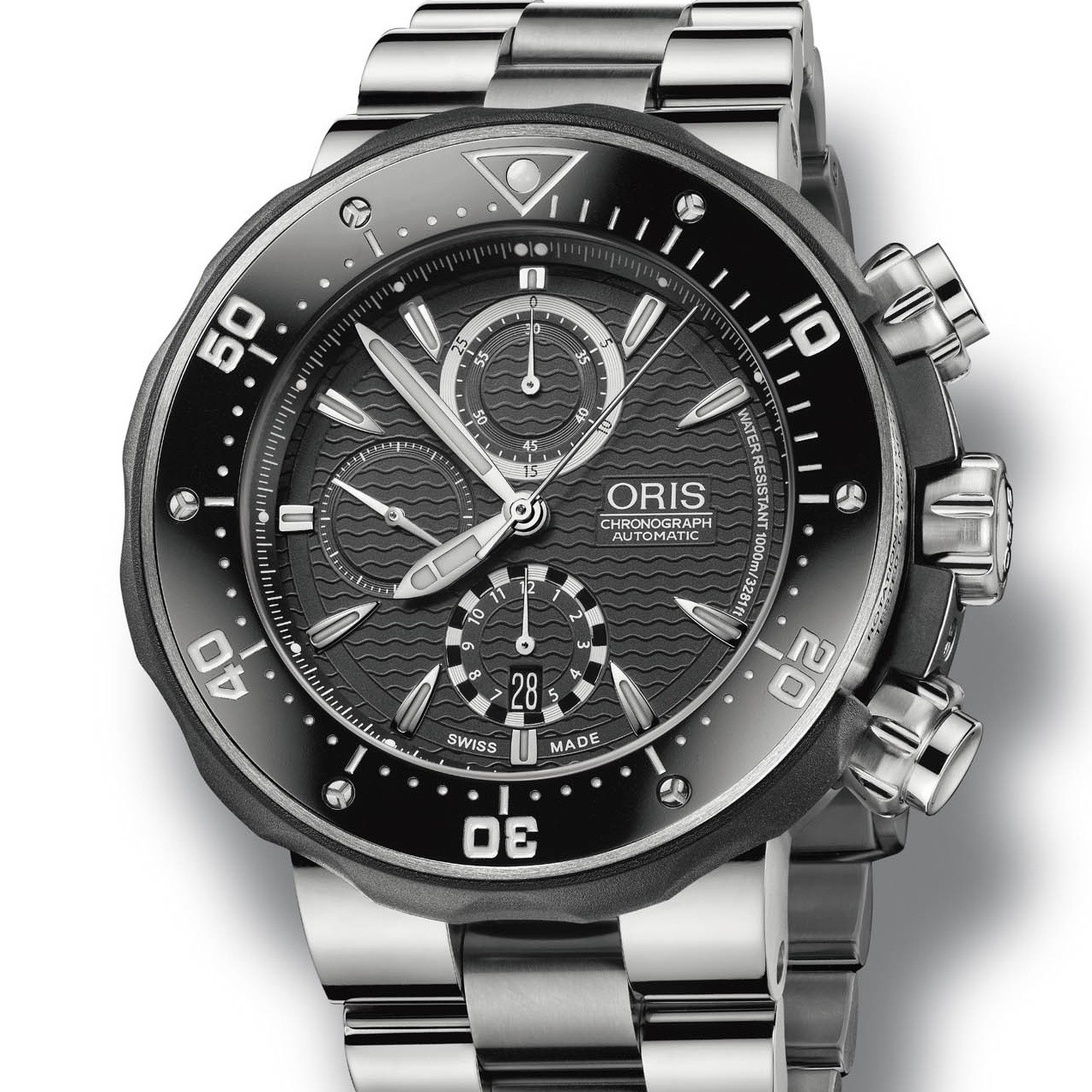 Oris is serious about its dive watches, so it worked with professional diver and brand ambassador Roman Frischknecht to develop one with zero gimmicks and full of practicality. The new Oris ProDiver Chronograph sees the same features that made it great to begin with — the lightweight 51mm titanium case, black ceramic bezel insert, automatic helium release valve and unidirectional bezel with its patented Rotating Safety System, which locks in place once it’s set to prevent potentially lethal errors.

The latest version — at S$6,400 — sees a slimmer profile, with the ridges on the bezel made deeper so divers have a better grip when they wear gloves. The watch still comes with two strap options — steel link bracelet and rubber strap — but both have been redesigned to sit better on the wrist for optimal comfort. The sliding sledge steel clasp and quick adjust system have been retained though, as both features are well appreciated by seasoned divers for fuss-free adjustments during expeditions in the vast oceans.