Explore ‘The Poetry of Time’ with Van Cleef & Arpels

For Van Cleef & Arpels, poetry is synonymous with time, which is why the Maison has dedicated so many of its most precious timepieces to capturing the fleeting essence of both. High jewellery has always been the quintessence of the company, so it only made sense to combine two of their most notable expertise — the measurement of time and excellent jewellery savoir-faire — to create watches that embody some of the most complex of emotions such as the longing of two lovers to the unpredictability of nature.

The result is a series of dreamy and horologically fascinating watches that never cease to surprise even the most discerning of collectors. Since its establishment in 1906, the creation of each Van Cleef & Arpels’ timepieces have always started off with a storyline, which then determines its design, technique and mechanics. Each watch is the result of meticulous craftsmanship, sheer passion and a lot of imagination.

Now, you too can embark on one of the most fascinating marriages between timekeeping and storytelling with Van Cleef & Arpels, as the Maison merges the two seamlessly for an exhibition that tells The Poetry of Time. Held from now till this Sunday, 26 February 2017 at ION orchard’s Level 1 Atrium, get up close to these extraordinary novelties, which includes five new creations fresh off the SIHH 2017 showcase earlier this year.

Here are five of our favourites at The Poetry of Time and their stories behind it. 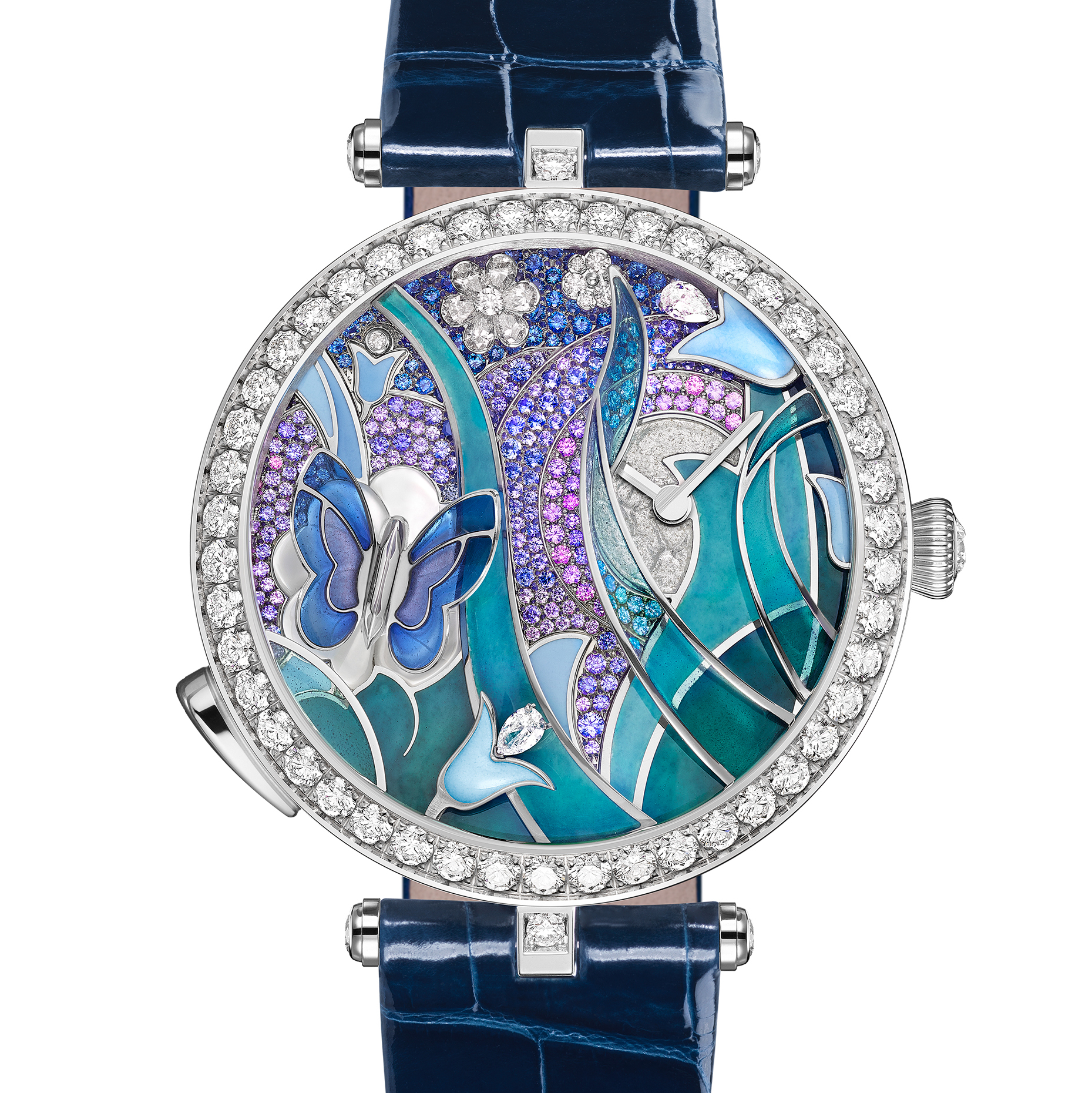 Look past the enchanting disposition of the new Lady Arpels Papillon Automate watch and you’ll realise it tells a story of the intimacy and unpredictability of nature. Equipped with a sophisticated automaton module, the butterfly randomly flutters its wings gracefully— as if a gentle breeze passed through — against a pastoral backdrop. At the back, a moon gently rises, its orb reflected on the surface of a pool amidst mother-of-pearl flowers and three-dimensional blades of grass, as the hours and minutes pass discretely by on the right. Depending on the power reserve, the butterfly will beat its wings one to four times in a row with irregular frequency, though this spectacle can also be triggered on demand at the push of a button. On a dial of grisaille enamelling, this novelty watch sets the nocturnal scene for two lovers who mark the time as their romantic stroll across the Pont des Arts brings them closer until they meet with a kiss. To create a façade bathed in moonlight, artisans had to carefully trace out the scenery with white powdered enamel known as “blanc de Limoges” over the the dark enamelled background, creating a mysterious and charming setting. The couple only reunites at midday and midnight, so drop by the exhibition at those times to partake in their fleeting but endearing rendezvous. 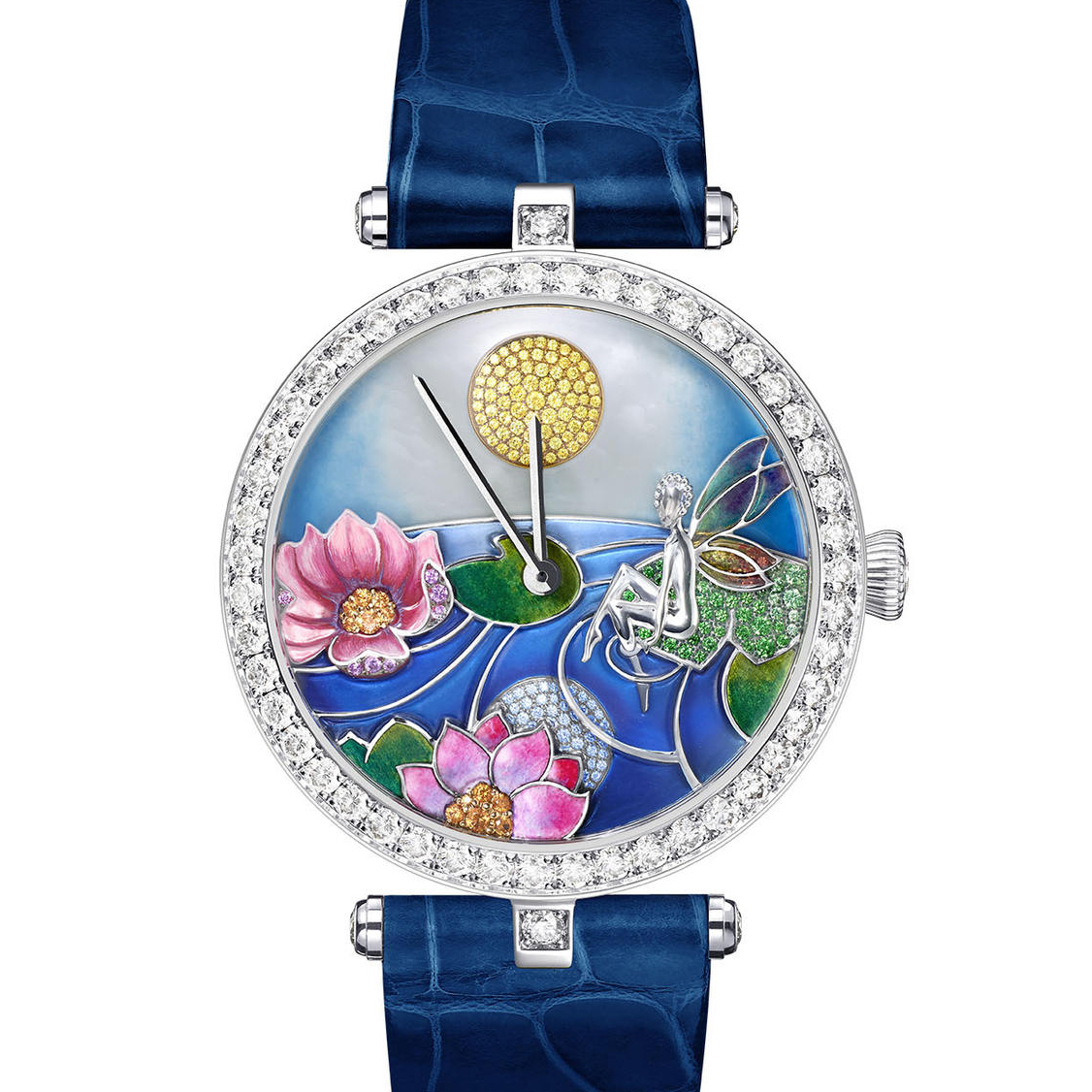 Dreamlike in essence, the Jour Nuit Fée Ondine looks like a scene out of a fairytale. The water nymph Ondine — crafted from gold and pear-shaped diamond — rests on a champlevé enamelled water lily, gazing at the delicate painted blue sky as it unravels from dawn to dusk. As the day transitions, the rotating dial sees the yellow sapphire sun makes way for a spellbinding diamond-encrusted moon, each taking turns to be reflections in the crystal translucent plique-à-jour enamelled waters, which varies its intensity from hour to hour. The dial makes a full circle in 24 hours, bringing the enchantment to real life one step further. To recreate the lightness of nature, Van Cleef & Arpels takes to the skies with a brand new movement that combines retrograde hours, variable speed minutes and animation on demand. This time, butterflies and a swallow take centre stage, telling the time by engaging in a playful aerial to-and-fro between the clouds. The hours take flight in the wake of the swallow — a symbol of joy — while three butterflies flit in and out of the mother-of-pearl clouds to tell the minutes, each taking turns for different parts of the hour. On demand, they make a brief appearance in succession, before peacefully resuming their flight. Set majestically against a guilloche enamelled backdrop, a slender ballerina in white gold and diamonds appears to be resting gracefully. That is until the button at the 8 o’clock position activates the double retrograde movement, which makes the outer veils of her tutu open to tell the time. Her left skirt rises first to mark the hours, followed by the right to indicate the minutes. A few seconds later, the playful scene comes to an end, and the ‘hands’ float back down to their original positions, a fluid movement that only exemplifies her grace and poise.