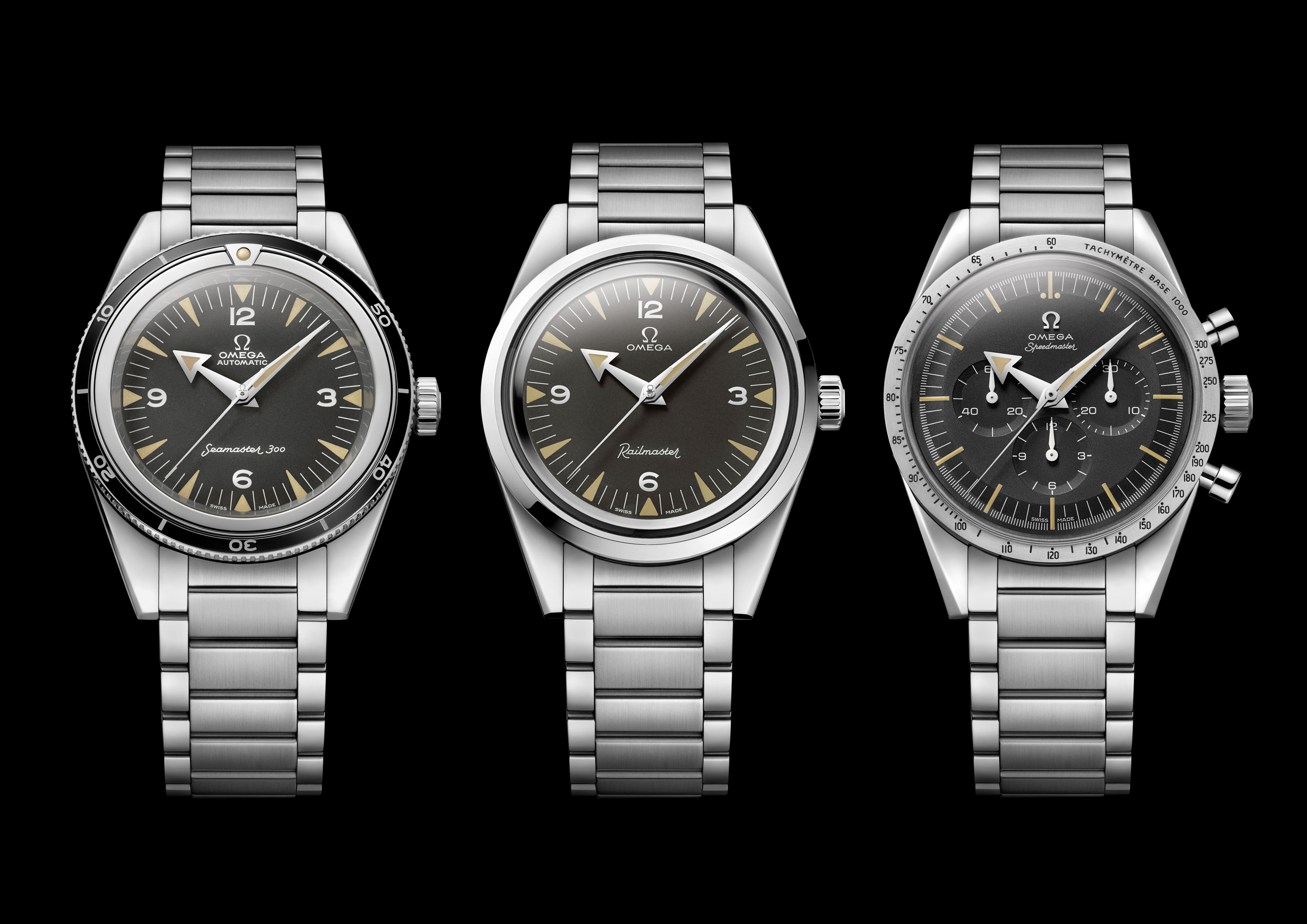 Exactly 60 years ago in 1957, Omega released three professional timepieces that were destined to become absolute classics in every collector’s arsenal: The Seamaster 300, the Railmaster and the Speedmaster.

Six decades is a long time for a watch to stay in fashion, and because these mechanical masterpieces have passed the test of time, Omega has decided to honour its legacy with what else, but a special 60th anniversary edition of each model.

Before you think this is another gimmick to resurrect interest in a couple of old watches, you’ll need to know that Omega is really serious about this anniversary special. Harnessing a unique digital scanning technology, the Swiss watchmaker is able to obtain accurate representations of the original watches, even via cross-sections. Alongside drawings of the original models from the archives, these findings have become templates for the new watches.

Each of these Omega 1957 Trilogy limited edition watches is limited to 3,557 pieces and will come housed in a presentation box inspired by its 1957 predecessor. This means the Seahorse on the lid, the retro logo and red corduroy lining will be present. In this box, two spare straps — leather and NATO — and a tool to change them is included.

For the most discerning of collectors, however, a regular re-edition wouldn’t suffice. And so Omega has decided to pamper them with a special Trilogy presentation box containing all three. The Swiss oak wood box sees the Seahorse engraved on its lid and an engraved numbered front-plate.

To make things extra special, each of the dials in this set is printed with the word ‘Trilogy’ and is numbered too. Only 557 of these are available, and we wouldn’t be surprised to see this being fought over at auction houses in a couple of years’ time.

The Seamaster 300 was made specifically for professionals who spent more time breathing out of an oxygen tank instead of their noses, and it did the job so well that it wasn’t long before it became the go-to timepiece in the diving industry. From afar, the original and commemorative version appear identical, right down to their 39mm stainless steel cases.

The dial’s configuration remains relatively similar, albeit a safer SuperLuminova that now marks the indexes and broad arrow hands instead of radium. To recreate the vintage piece’s unique finish, this dial is given a faux tropical finish.

Based on the CK2913 version, the 2017 model also features a black aluminium bezel with the same Naiad sign on the crown — a mark of exceptional water resistance back in 1957. At the back of the case sits the familiar Seahorse, drawn exactly as it was back in its golden days. In place of the caliber 501, the more advanced Omega Master Chronometer caliber 8806 powers the watch.

The Railmaster may appear to be the most unassuming of the trio, but inside it’s an anti-magnetic powerhouse. Designed specifically for scientists, technicians or those who work in close proximity to electrical fields, the unpretentious timepiece tackles headfirst one of its greatest adversaries — magnetic fields — which often hinders its accuracy.

While the original reference CK2914 could only handle magnetic fields up to 1,000 Gauss, Omega made sure this 21st-century version could deal with much more, and the result is an anti-magnetism of 15,000 Gauss, thanks to the caliber 8806. To make time-keeping easier at night, Omega also deepened the SuperLuminova markers on the dial.

In many ways, this new Railmaster is a faithful tribute to the workhorse that was the original, only now it also has technology on its side too.

Ask any Omega enthusiast and they’ll likely rave about the Speedmaster till the end of time, which is why this one is bound to make waves in the horological world. Taking the same exact proportions and design of the first model — the reference CK2915-1 — launched in 1957, the 2017 edition will provide endless hits of nostalgia. This was the chronograph that started it all, after all, and it’s even been to the moon.

For a chronograph that is often fiercely fought over at auctions, this re-edition will please many fans. The smallest details are covered, from the hefty 38mm case with the same straight lugs (as opposed to the lyre lugs on the 42mm) and the identically etched tachymeter bezel.

A subtle faux tropicalisation helps give this version the same vintage feel and the broad arrow hands — its signature — remain. The applied Omega logo will look familiar and so will the font on the Omega Speedmaster signature. Clearly, the Swiss firm has fiercely maintained the period-accuracy of this watch. In place of the original caliber 321 is the chronograph caliber 1861.