The Rolex Oyster Perpetual Sea-Dweller has been the faithful companion for underwater adventurers since its creation in 1967, and for good reason. Besides being extremely reliable and resilient, the watch also comes with useful features such as the helium escape valve, a Rolex-patent which regulates air pressure within the case during decompression phases of deep-water saturation dives.

This year, the Sea-Dweller celebrates its 50th Anniversary, and we expected nothing less than a special edition model. Its latest incarnation sees a few unorthodox moves by Rolex. Having expanded a considerable 3mm to make 43mm, the watch also — naturally — gets a redesigned bracelet that’s wider. The result is a more proportionate-looking timepiece that also sits better on the wrist. 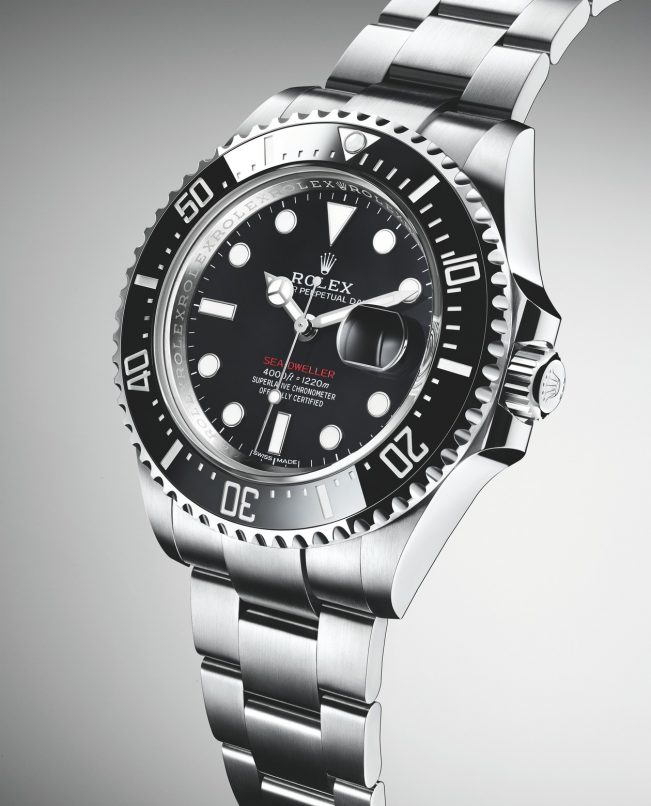 Look slightly to your right and you’ll find that there’s now a cyclops (aka the magnifying glass) over the date at 3 o’clock — an unprecedented and rather controversial feature for the model. While the cyclops has been a mainstay for its other aquatic brethren, the Submariner, debuting this feature on the Sea Dweller may breathe new life into its waning popularity.

But it’s not that Rolex has never tried. In fact, the Swiss manufacturer had plans to apply the cyclops to the original Sea-Dweller in the ‘60s, but scrapped the idea when it realised this feature caused structural weaknesses to the plexiglass, and caused it to shatter underwater before even reaching the desired depth rating.

The cyclops might be new, but Rolex has still kept some nostalgic features of the Sea-Dweller. Its name — in red — makes a return on the dial, just like the original from the ‘60s, a move which will surely delight fans of the vintage collection.

Its uni-directional bezel is a handsome black Cerachrom, similar to that of the recently launched Cosmograph Daytona. Since the watch will be your only friend at its waterproof depth of 1,220m, it’s useful that the hour markers and hands are filled with blue chromalight lume.

Beating at a frequency of 4Hz, the watch’s new Perpetual Calibre 3235 has all the credentials for a pedigree movement. Entirely designed and manufactured by Rolex, the self-winding mechanical movement will power the timepiece for 70 hours — an upgrade from the previous 48 hours — thanks to a new barrel architecture and improved Chronergy escapement efficiency. The Parachrom hairspring fitted to the oscillator is also made of paramagnetic alloy, which offers up to 10 times more precision than traditional hairsprings in case of shocks.

Like all the other newer models to roll out of Rolex’s esteemed factory, the Sea-Dweller also has pedigree Superlative Chronometer certification to guarantee exceptional watchmaking standards in terms of precision, power reserve, waterproofing and self-winding.

Dive Watches Rolex Luxury Timepieces Baselworld 2017 Rolex Oyster Perpetual Sea-Dweller 50th Anniversary Rolex Perpetual Calibre 3235 Superlative Rolex Chronometer certification Sea-Dweller
Shatricia Nair
Managing Editor
Shatricia Nair is a motoring, watches, and wellness writer who is perpetually knee-deep in the world of V8s, tourbillons, and the latest fitness trends. She is fuelled by peanut butter and three cups of coffee a day.
Motoring Wellness Watches Beauty Style
Sign up for our newsletters to have the latest stories delivered straight to your inbox every week.