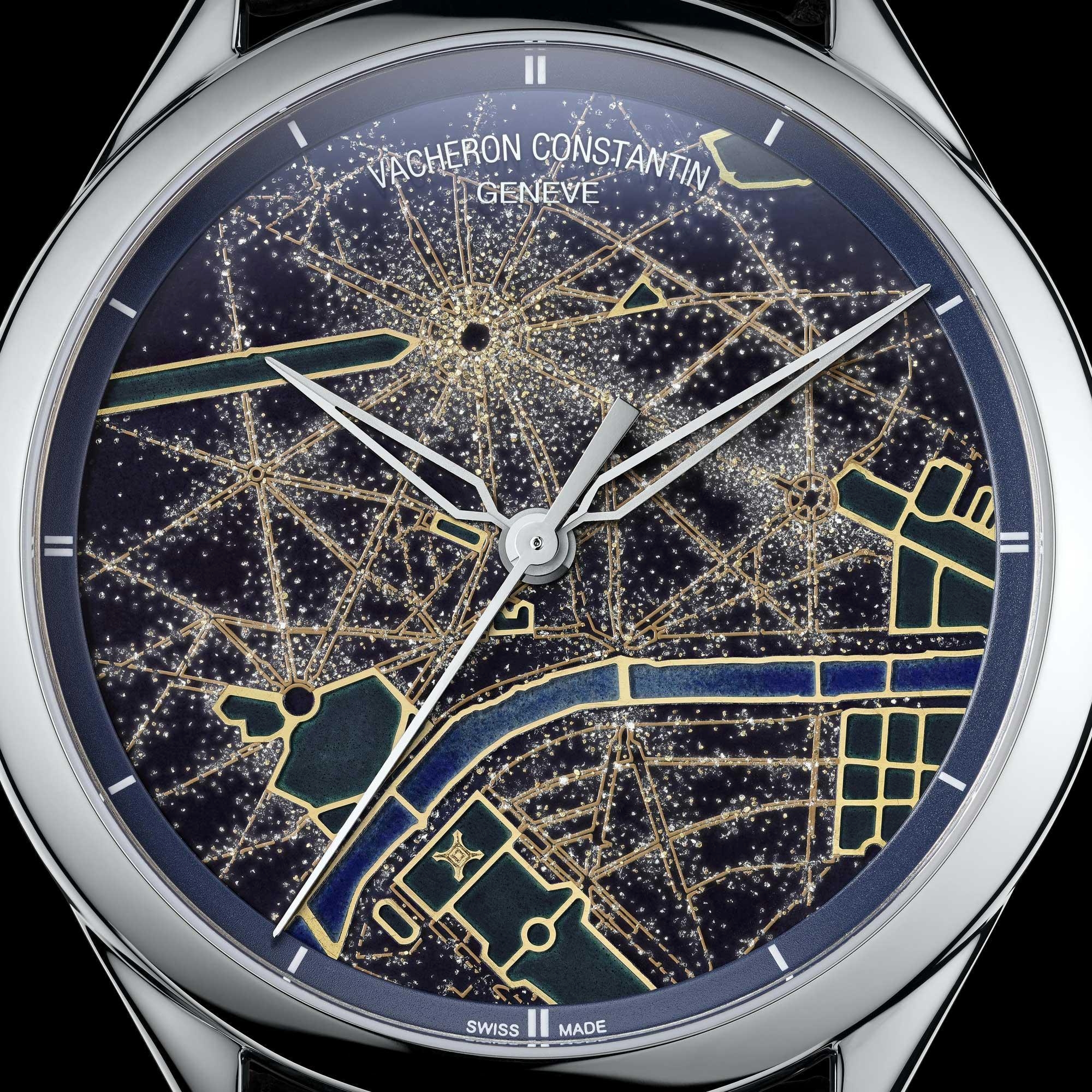 If you’re one of those people who get entranced by the glistening bird’s eye view of urban expanses whilst on the plane, Vacheron Constantin has just the timepiece for you. And of your favourite city too. Achieved via next-level Grand Feu champlevé enamelling techniques and hand-applied precious powder by a Japanese artisan, the new Métiers d’Art Villes Lumières collection is your first-class ticket to embarking on a nocturnal journey way up in the sky, except you’re still really on land.

A precious amalgamation of gold, pearl, platinum and diamond powders, Japanese guest artist Yoko Iman meticulously endows the enamel with exceptional radiance, each glowing speck around rivers, major highways and famous landmarks placed with great precision to portray the majesty of the urban landscape from thousands of feet in the air. As you would imagine, individually applying these power particles requires dexterity of extremities. Having mastered the art under famed Japanese masters, Imai’s technique is adapted from calligraphy. A thin stylus is used to individually affix the power particles. But the powered specks aren’t random; chosen according to size and shimmer, each type of powder is placed according to their varying brightness to create depth and light, and the composition gradually softens towards the outer edges of the dial to keep emphasis in its centre. Imai then takes reproducing the light cartography of each city one step further by portraying even the traffic density and various types of light unique to each and every one.

But these watches could not be achieved without the exceptional enamelling that Vacheron Constantin has come to be famous for. Champlevé is a form of enamelwork in which hollows made in a metal surface are filled with coloured enamels. This, of course, requires the craftsmanship of a master enameller, who hollows out the outlines of streets and stretches of water by hand, before applying layers of translucent coloured enamels, each coating fired at 850°C.

Anyone who’s tried their hand at enamelling will know that this is an extremely delicate process that might result in the inevitable crack or flawed surface, both of which isn’t tolerated in the esteemed Swiss house. Like Imai, the master enameller also takes his skill to the next level by composing gradients of translucent and darker shades to evoke the mystery of night fall.

Vacheron Constantin has started this project with three cities — Geneva, Paris and New York — though more versions are expected. Like the rest of the timepieces from the Métiers d’Art line, the Villes Lumières series are 40mm wide and are offered in 18K white gold. Inside, the self-winding calibre 2460 SC powers the hours, minutes and second hands, visible via the transparent case back. However, a masterpiece like this will set you back S$154,200. I think we’ll stick to peering out of plane windows for now.

Shatricia Nair
Managing Editor
Shatricia Nair is a motoring, watches, and wellness writer who is perpetually knee-deep in the world of V8s, tourbillons, and the latest fitness trends. She is fuelled by peanut butter and three cups of coffee a day.
Motoring Wellness Watches Beauty Style