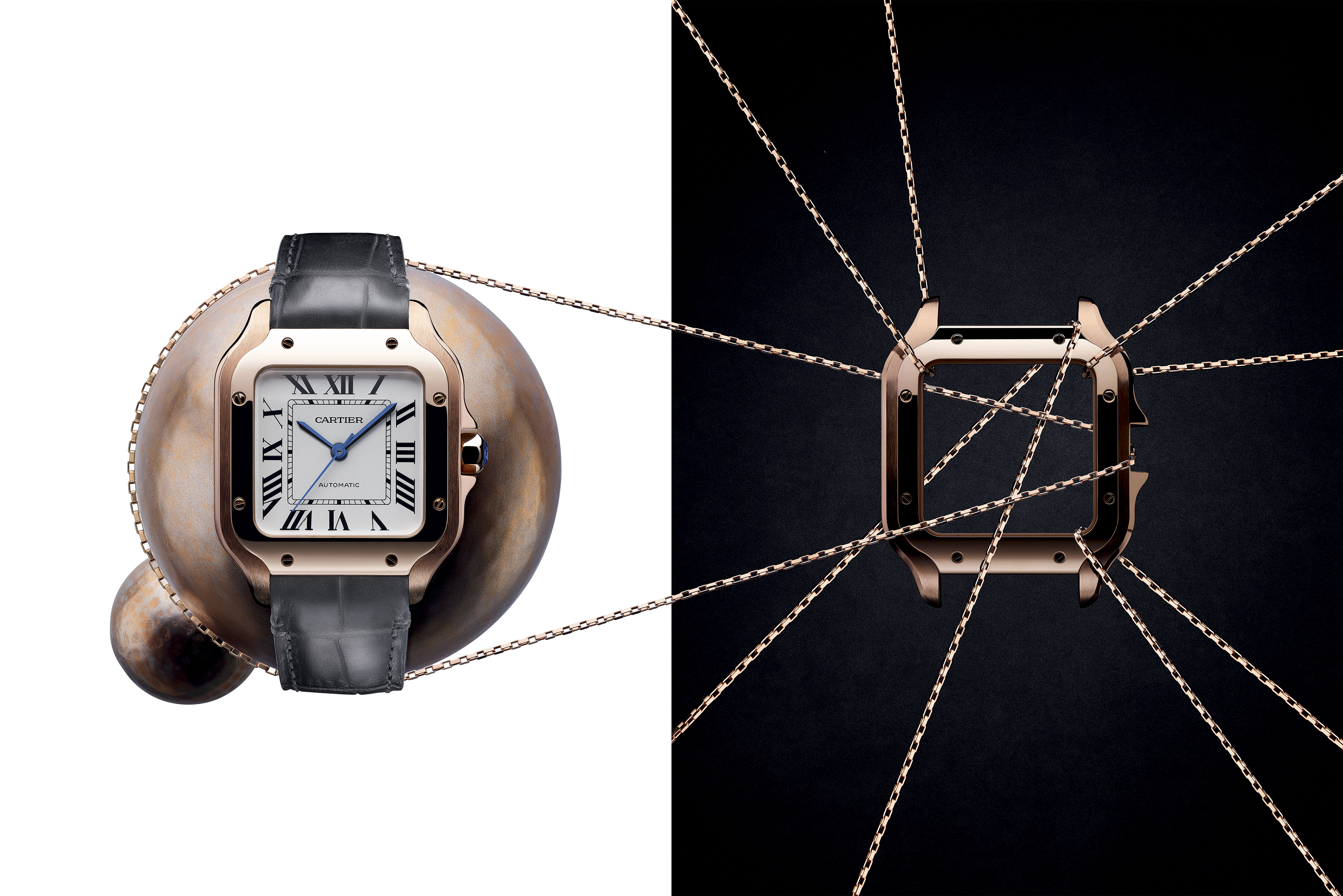 Alberto Santos-Dumont is a name that’s well-steeped in the pages of history. You’ll find an airport in Rio de Janeiro christened after him, as you would a street in Paris. He’s also immortalised on the official Brazilian presidential aircraft, and a crater on the moon. For all his contributions to modern aeronautic engineering, it’s no surprise he had a timepiece named after him too: The Santos de Cartier.

Style
The most sophisticated sports watches for women on-the-go

The only difference is that this watch wasn’t merely named after him, but also made for him. Santos-Dumont was a visionary in the world of aviation, having invented 22 flying machines, including the airship, helicopter, monoplane and biplane. He famously piloted the first hot air balloon flight in 1897, and a decade later, invented the Demoiselle — a predecessor to the modern aeroplane.

He is known for his penchant for flying ridiculously close to the Eiffel Tower — even crashing once — and his work in pioneering innovations in the aeronautic world with imaginative solutions, such as using Chinese varnished silk, and piano strings for hot air balloons. However, his larger-than-life personality was not only defined by his ingenuity, but also by his unorthodox approach to clothing.

He valued comfort beyond conformity, choosing to wear his cap backwards, while his aviator goggles and custom-made coat were criss-crossed with cables and hooked up to the commands of his aeroplane. He also disliked checking his pocket watch while flying. A complaint to his close friend Cartier resulted in the birth of Santos de Cartier — the first men’s wristwatch ever made — which allowed Santos-Dumont to check his flight performance while keeping both hands on the controls.

Style
Uncomplicate this: Tourbillon, the whirlwind fighting against gravity

Forty years after the Santos timepiece’s last big overhaul in the late 1970s, the classic has resurfaced again with better ergonomics, sleeker lines, and more elegant curves. The case, originally inspired by the silhouette of the Eiffel Tower, now boasts softer, more form-fitting curves that hug the wrist comfortably.

The bezel extends to the strap, which, in the spirit of innovation, has been updated with Cartier’s QuickSwitch system, allowing for easy adjustments without tools. Each watch comes with two straps, lest you feel constrained by one, and the movement is now the in-house automatic calibre 1847 MC.

The Santos de Cartier was clearly made for a modern man in mind back in 1904, and this holds true more than a century later — only now you’ll find one for every personality too. 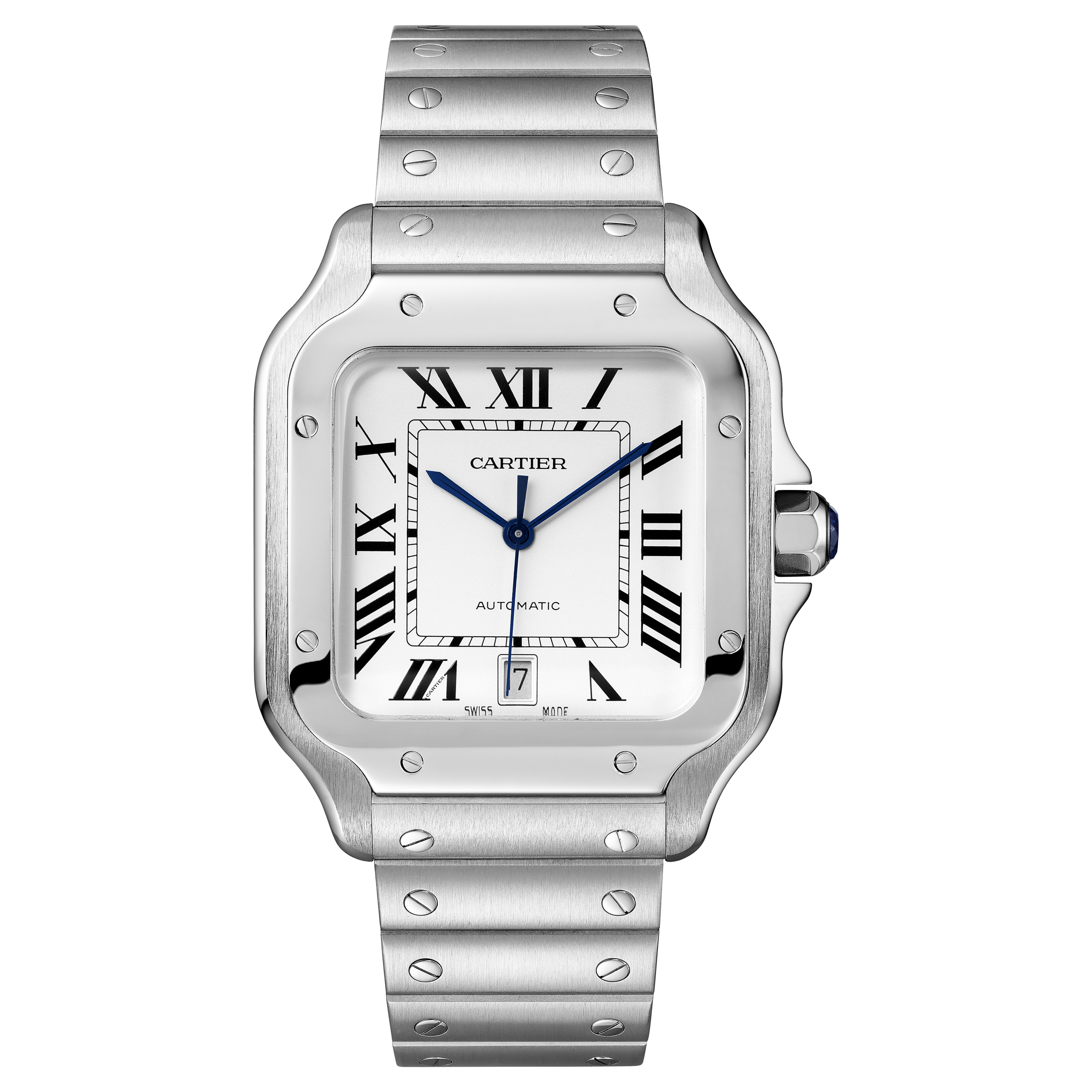 The Santos de Cartier wasn’t originally designed on a bracelet, but the rivet-like screws and square bezel that characterised the model practically demanded for one. This steel-on-steel version sees the case and bracelet merge seamlessly as if they were designed for each other. Adjustments are just as effortless — a SmartLink self-fitting technology adjusts the length of the bracelet without requiring tools of any sort, instead relying on a button on each SmartLink to add or remove metal links. The industrialism of the timepiece is an unusual take on a watch that’s meant for business, both during and after hours. 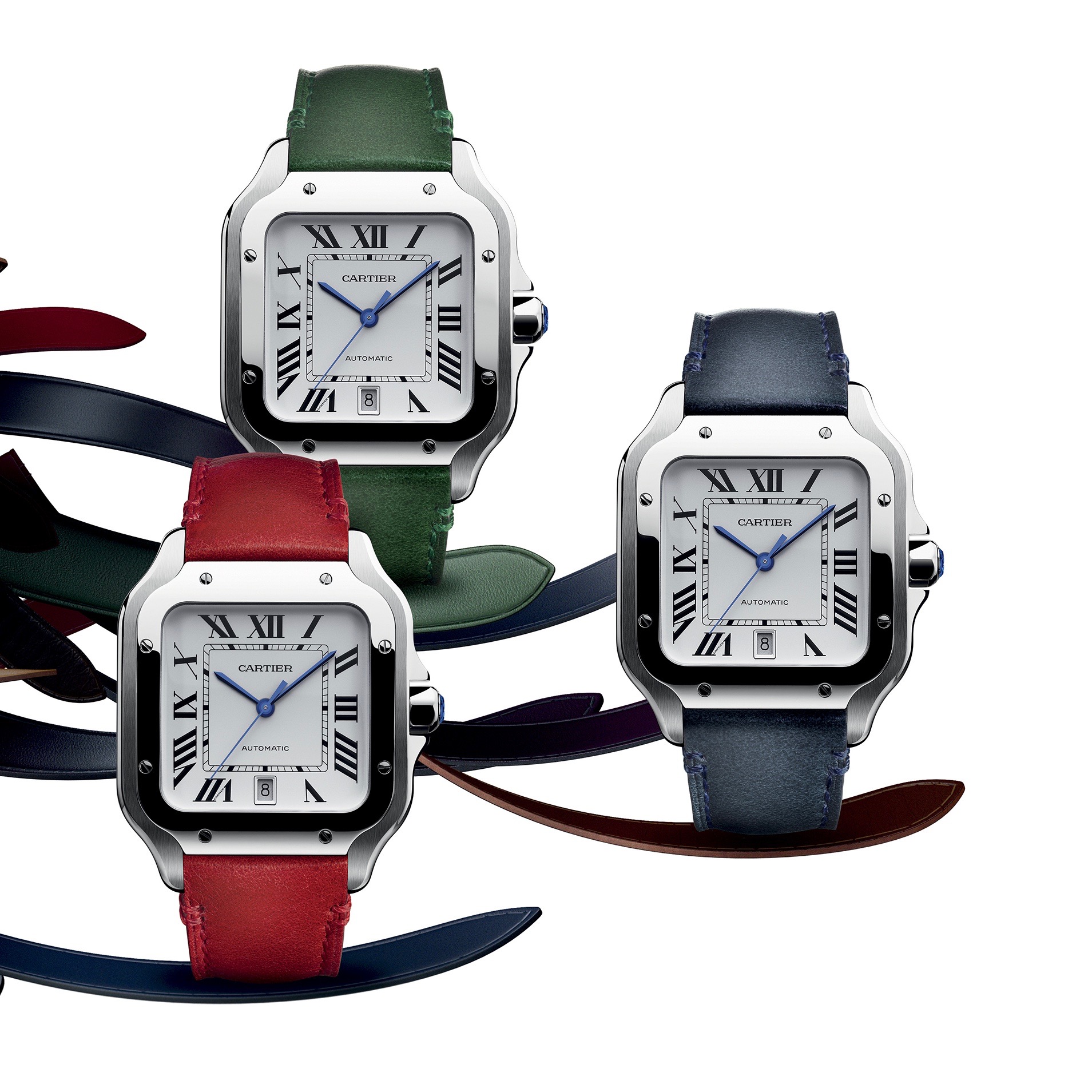 There’s no surefire way of telling the world you’re an artist in your own right than with a pop of colour on your wrist. Timepieces have, after all, been traditionally regarded as timeless possessions and should conform to muted colour codes that would match your entire wardrobe. In a nod to the creative brilliance of Alberto Santos-Dumont, Crayola-hued leather straps are few of the many options available, each drawing the eye towards the vivid blue hands and bold Roman numerals within. 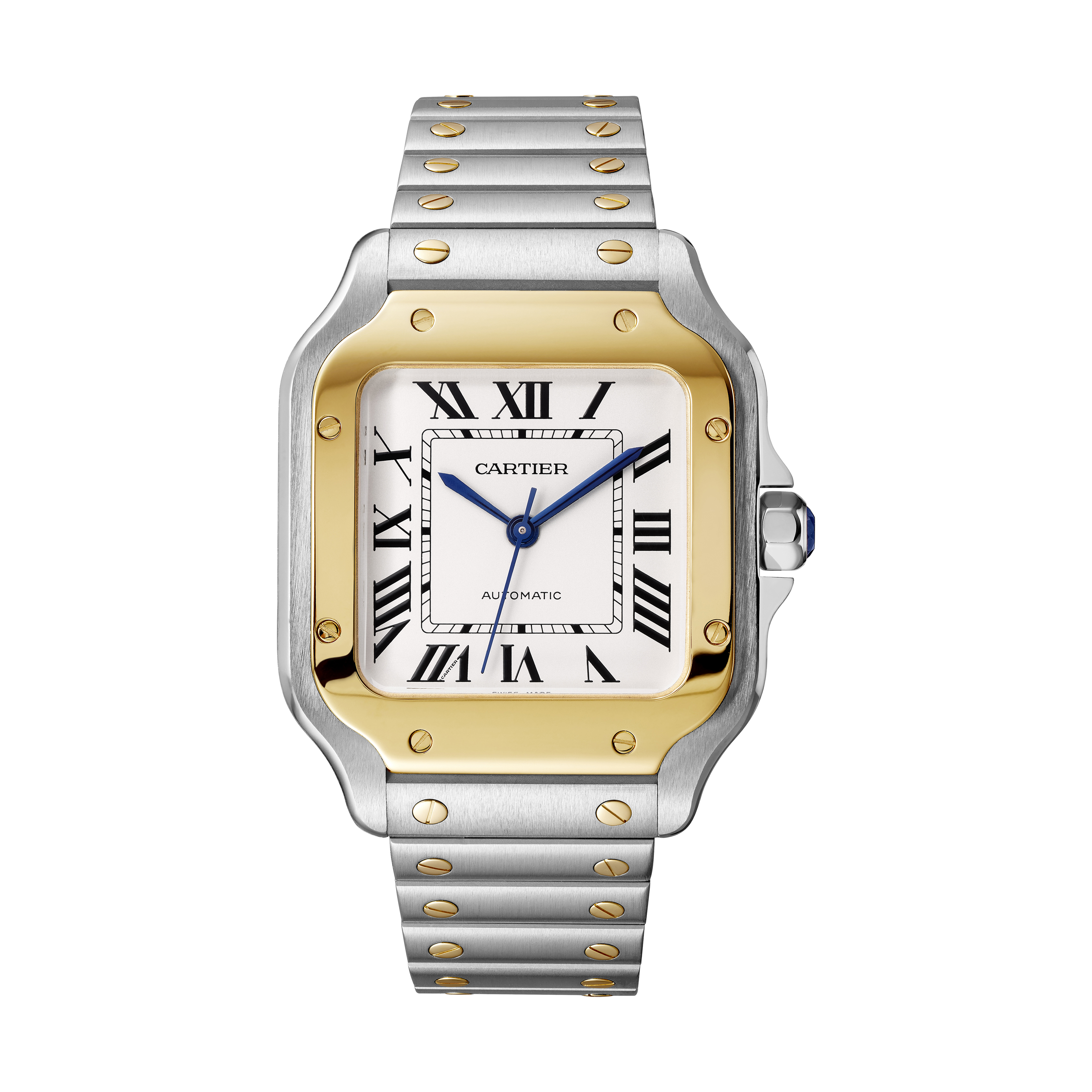 The marriage of two largely contrasting metals on a watch case would intimidate many, but not those who understand that the bold move only brings out the curves and lines of the classic style. Framed by an 18k yellow gold bezel, the silvered opaline dial and blued steel sword shaped hands are accentuated amidst the square steel frame. An accompanying steel bracelet with 18k yellow gold screws keeps the visual interest going throughout the timepiece. 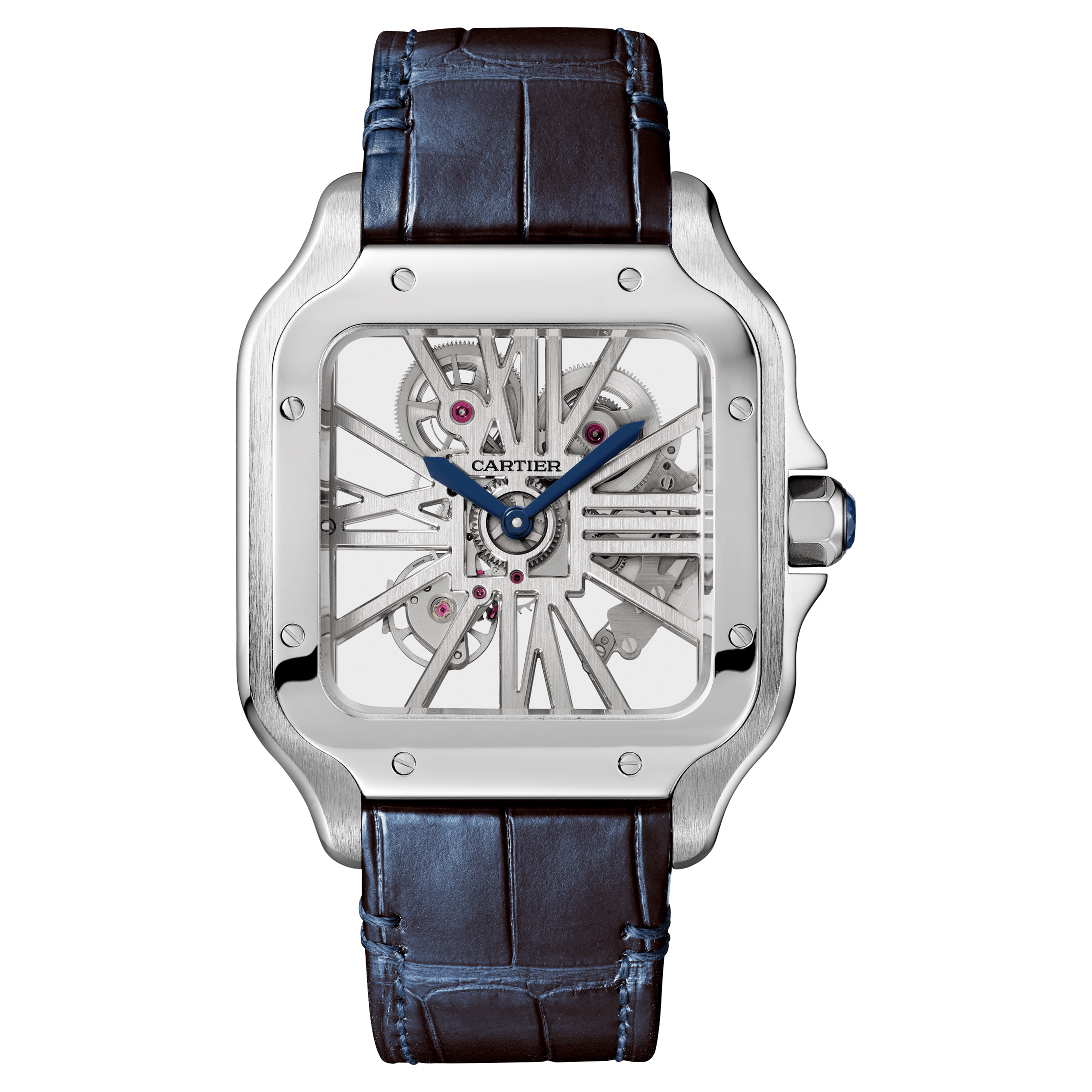 One of the most recognisable features about the Santos de Cartier is its dial, so when the team was tasked to strip it down to a skeletonised watch, the challenge was to retain the iconic look. Like cerebral blueprints of futuristic buildings, this version sees a latticed see-through dial with the large numerals as bridges, leaving the Caliber 9611MC open for all to admire. There are virtually no parts without a function; this watch is an exercise in both form and function. 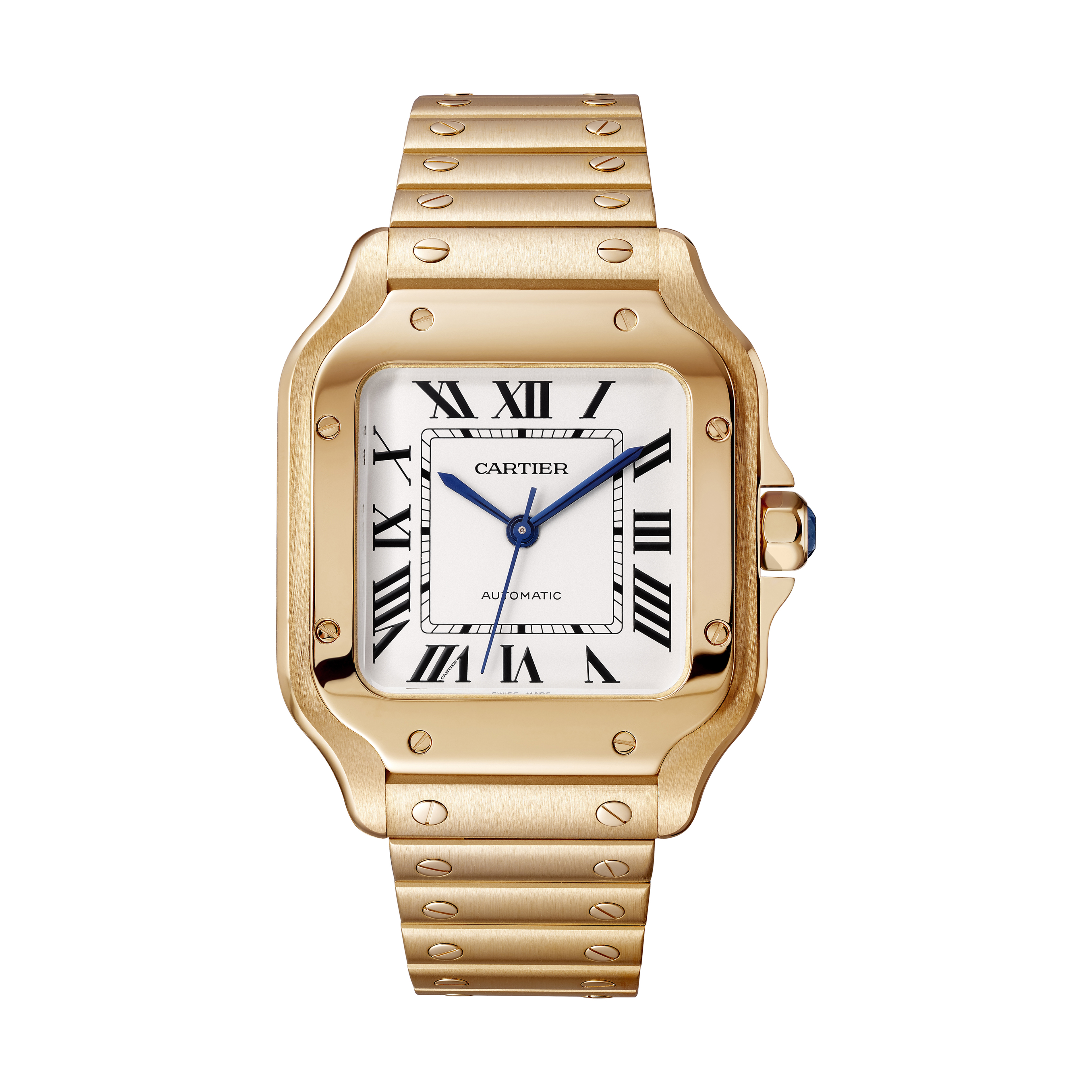 The Côte d’Azur lifestyle wasn’t at the top of Mr Cartier’s mind when he designed the watch, but it’s hard to not recall the vivid tropical glow bouncing off the pink-gold Santos de Cartier as you’re out at sea. At this point, you’re also nursing a flute of bubbly as the sea breeze gently teases your hair. The statement timepiece comes with a matching gold bracelet, or grey alligator strap should you wish to inject more pizzazz into your riviera ensemble — although the modest blue calf strap option would fit in amidst the azure waters just as well. 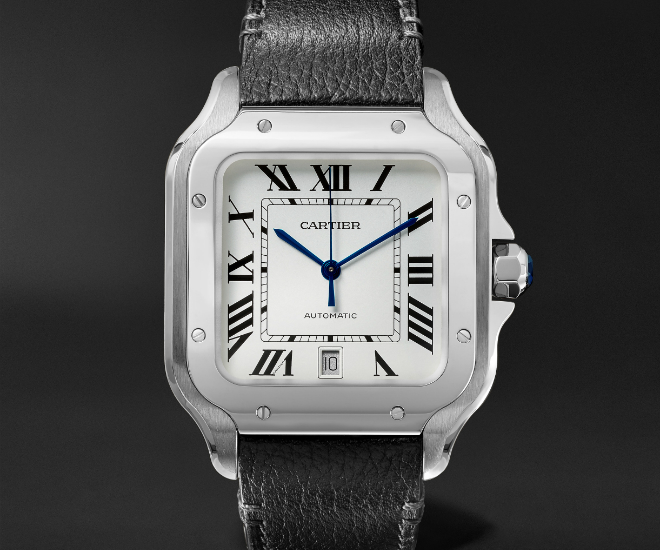 The multi-sensory experience of motorsport can only mean that the smell of burning rubber and snarl of a respectable V8 should only be accompanied by a damn good looking watch. The lithe monocoque steel chassis is matched with a Mr Porter-exclusive grained, black leather strap for a comfortable fit and you’ll rest easy knowing each piece was vigorously tested for everything from resistance to variations in position, to impact and acceleration.