Style
Aviation creations: 5 pilot watches to soar with
Share this article
Next article

Here’s something that would excite every boy whose childhood dreams included being captain of an aircraft. Designed for the pilot in mind, aviation watches are often characterised by a few basic requirements, such as highly accurate timekeeping capabilities and a clean dial with contrasting markers.

Today, pilot watches no longer only serve military pilots heading off to war. Luxury watch companies are reviving the classic watch style with a bevy of design and technical updates. This includes multiple displays and dials and even tourbillon complications. From Rolex’s latest Air-King to Breitling’s well-travelled Navitimer Aviation 01 Chronograph, here are five of our favourites. This aviation watch might just be more well-travelled than you. In commemoration with the Breitling DC-3’s grand world tour, the Swiss watch manufacturer has created 500 exclusive DC-3 Navitimer 01 aviation chronograph watches (S$16,440 each). The exciting part? To ensure they’re all truly part of the entire adventure, they’ll all hitch a ride onboard the legendary aircraft to circumnavigate the globe. The exclusive steel 46mm timepiece runs with the same in-house automatic chronograph movement Caliber B01, but is distinguished by its caseback, which sees the Breitling DC-3 World Tour logo and example number engraved. Keeping it classic, Breitling pairs the black dial with white counters and a brown leather strap with contrasting stitching. Unfortunately, you’ll have to wait till fall this year to get your hands on one; it’ll only be available for sale once its voyage around the world is complete. This iteration might be behemoth in Big Pilot tradition at 55mm wide, but it stays true to the Swiss brand’s history of navigation watches from the ‘40s; it’s the same diameter as the original 52 caliber Tirette Seconde Centrale (TSC) made for the German Air Force then. Equipped with the rather old-school but time-tested IWC caliber 98300 (a.k.a. the Jones caliber), the timepiece beats at 18,000vph and has a 48-hour power reserve. To minimise interference with magnetic field lines, the same soft iron inner case is used, which means that while you can’t see the movement, you know you’re getting a timepiece that’s functionally faithful to the original. Priced at S$21,000, the Big Pilot’s Heritage 55 will only be a limited edition of 100 worldwide. Known to be highly involved in the world of aviation and exploration since the ‘30s, the Rolex Oyster was famous for being a trusty companion to many pioneers on their endeavours. Now, the Swiss house pays homage to their spirit of adventure with the new Air King. A much bolder update from the previously scaled down and conservative version, the 40mm wide watch sees a larger and significantly more legible dial, albeit with an unusual design. The hours — marked by the 3-6-9 indices — and minute markers are placed on the same scale. Inside, the 3131 in-house caliber powers the watch with the same remarkable precision as the rest of the Rolex entourage, earning it the COSC and Rolex Superlative Chronometer certifications. The watch (S$8,760) is also anti-magnetic, thanks to the escape wheel that’s made of special nickel-phosphorous alloy — making it a watch worthy of the best pilots. Patek is no stranger to making aviator’s timepieces, after all it’s made two prototype pilot’s watches in 1936, one of which sold for US$1.7 million (S$2.42 million) in 2009. But this isn’t a remake of those watches; this one is radically different in several way. Unlike most Patek Philippe timepieces, the dial on this watch is a very matte blue, its hours marked by large solid white gold numerals and filled with Super-Luminova. Mechanically, the 42mm watch (S$61,100) is similar to the others in the Time Travel series, running with the same Caliber 324, a small movement with a proportionate power reserve of 35 to 45 hours. On the left of the case sits two pushers that set the second time zone hand and can be locked to prevent accidental changes. Not travelling anytime soon? The time zone hand can also be hidden under the hour hand so you don’t get confused. 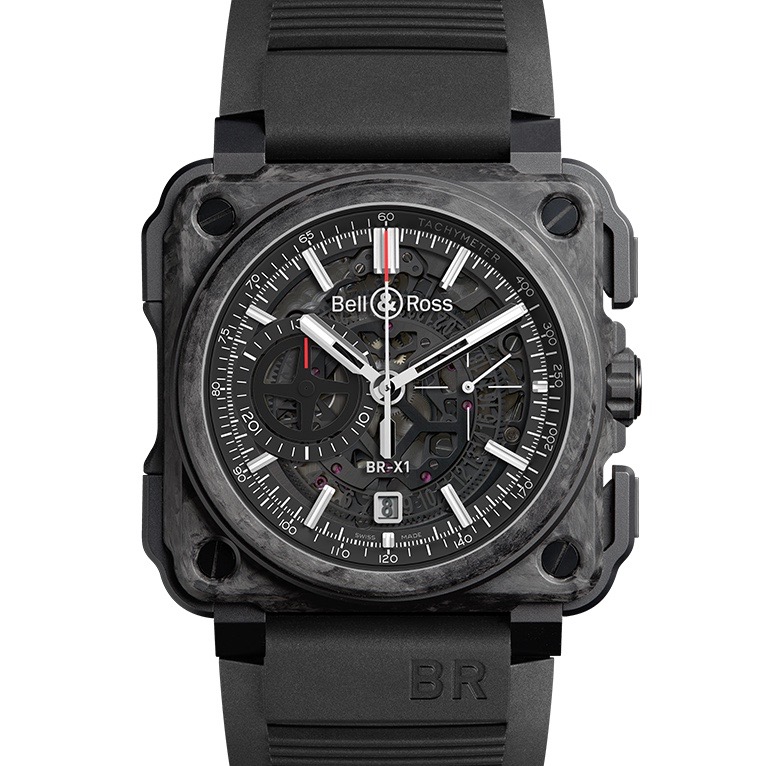 Perhaps the most visually striking in Bell & Ross’ line-up, the BR-X1 Carbone Forgé watch (S$32,600) can credit its unique ruggedness to the special manufacturing process of forged carbon. Unlike the regular woven kinds with checkered patterns, forged carbon is the result of countless string-like pieces of carbon fibre that are “forged” into one solid piece from a mold. Because of this, no two watches are the same. At its corners, lugs and rocking pushers crafted from ceramic ensure the sides of the watch remain scratch-free forever, albeit not shatter-free. Though its dial is skeletonised, the indices and hands are contrasting and wide enough to remain legible. Inside, the BR-CAL.313 movement borrows a top plate from a Dubois Depraz chronograph module, installed on an ETA base for a busy-looking dial that highlights the technical expertise and craftsmanship of the luxury french watch firm.