Home > Style > Watches > In the loupe: The Pasha de Cartier, a timepiece fit for Marrakesh’s most respected 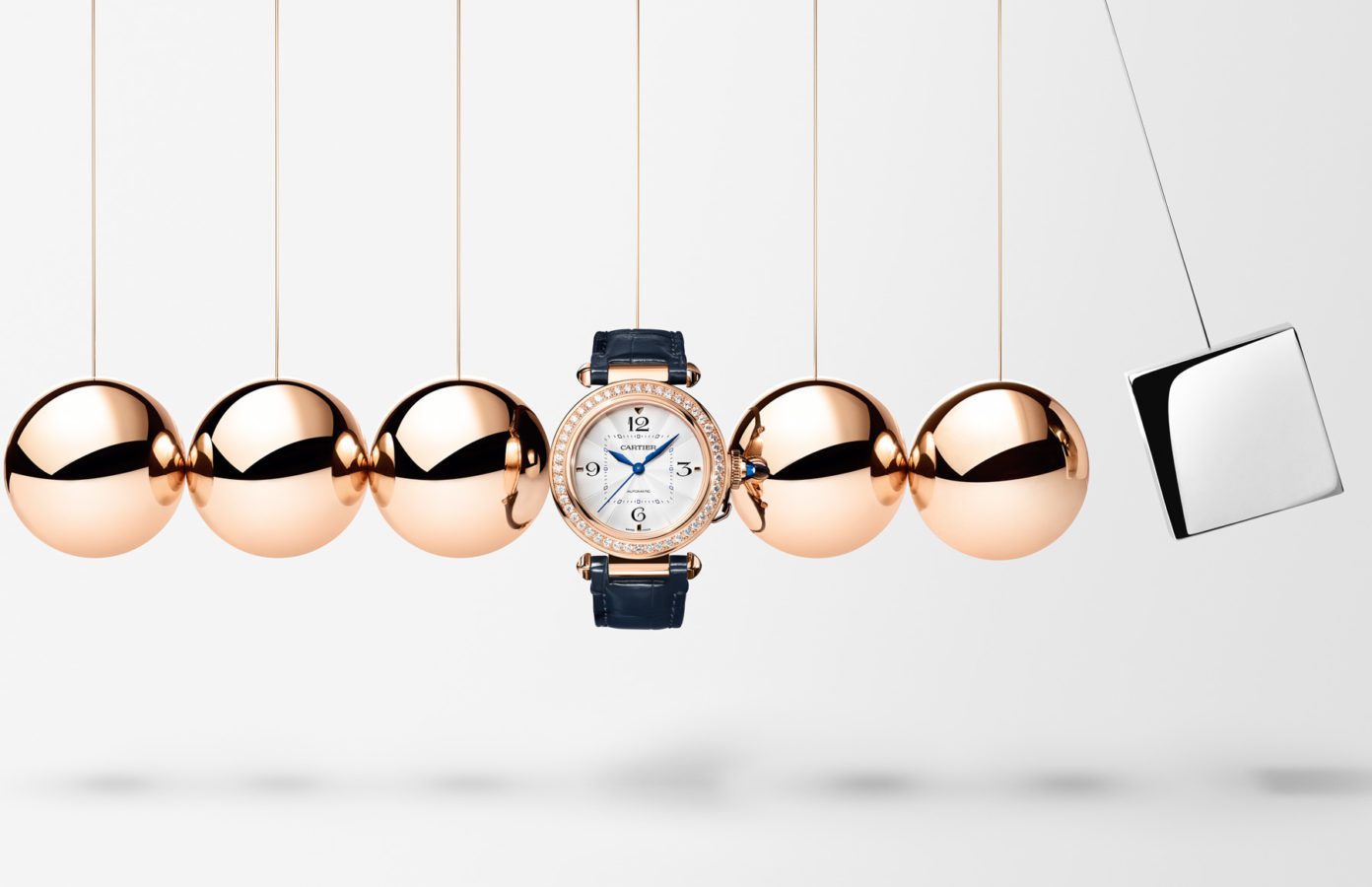 In the loupe: The Pasha de Cartier, a timepiece fit for Marrakesh’s most respected

Style
In the loupe: The Pasha de Cartier, a timepiece fit for Marrakesh’s most respected
Share this article
Next article

It is worth bearing in mind that things that existed in 1985, such as the car phone, personal pager, and the original Macintosh, well and truly belong in a museum today.

In contrast, the Pasha de Cartier has been so well designed, that save for whatever’s under the hood, the new bears few differences from the old. After all, Cartier knows a thing or two about timelessness, a concept that travelled far and wide throughout their high jewellery line (remember the Jeanne Toussaint?) to other timepieces that have earned — with every new iteration — the title of being a “new classic”, just like the Cle, Drive, and Santos.

One of the most distinguishing features of any Cartier watch is its unconventional shape, so when the Pasha was officially launched in 1985, it was easily an eye-catcher in the sea of stoic luxury watches, which helped especially since it was made to compete for the same audience as icons such as the Royal Oak.

Of course, who better than the prolific Gerald Genta to be commissioned for this job, who couldn’t sooner row against the tide of Cartier’s aesthetics by using Art Deco-styled Arabic numerals instead of the usual Roman ones. Then he fitted a cabochon-capped protector on the crown, had a go at two very different shapes, and the rest was history.

Fit for a Pasha

Named after the Pasha of Marrakesh — whose love for fine watchmaking made him a loyal customer of Louis Cartier’s — the watch’s extroverted design was a sign of the hedonistic times, gaining fans that included the very stylish Sammy Davis Jr, who — so it is said — was buried with it for timekeeping in the afterlife.

Like the rest, the Pasha de Cartier has prospered in a variety of incarnations, from the sporty Pasha C in 1995 which first introduced steel to the line-up, or the Pasha 32 from 1998 — a precious diamond-encrusted gilded reinterpretation made for the ladies.

There were perpetual calendar variations and romantic moonphase options. Heck, there was even one specifically made for golfers, miniature scoreboard included. There was a size for everyone too; 2005 saw a bigger 42mm offering, and on the other end of the spectrum sat the Miss Pasha, a mini 27mm version that stole hearts four years later.

However, the whole lot have the 1943 version to thank. Easily the most offbeat of them all, the trench-watch style saw a protective gold grid over the crystal. Its powerful lines and elegant round case, coupled with curvy Arabic numerals and an unmistakable crown cover, would become an inspiration for the rest of the Pasha watches, even 40 years later.

There’s plenty that meets the eye when you look at any Pasha de Cartier, new or old. Compositionally speaking, it’s a square in a circle. The square chapter ring sports Arabic numerals on each side, providing a graceful symmetry that slowly draws the eye to the chained crown cover — easily the most noticeable (and polarising) feature of the watch. 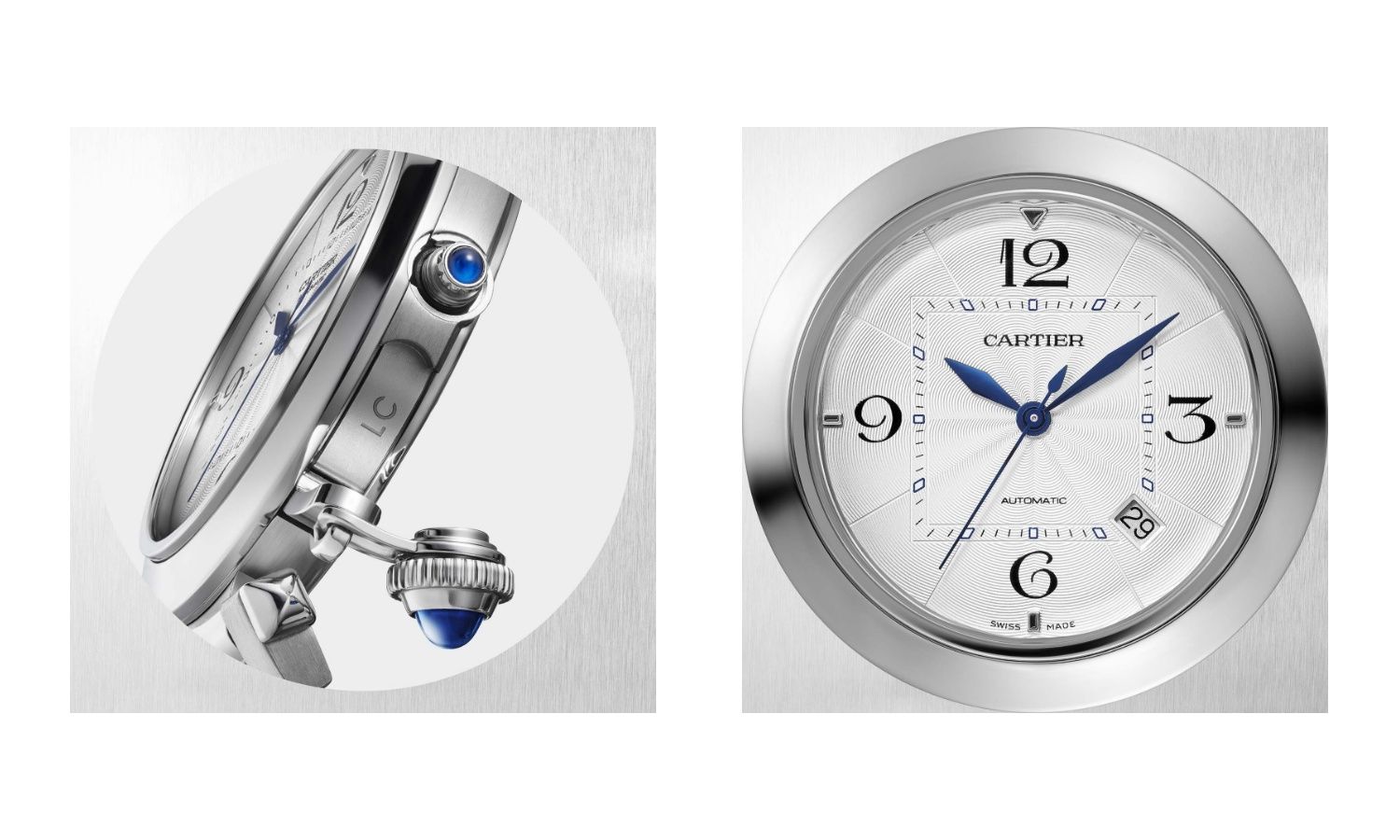 Attached by a small chain link to the case, the crown cover opens to reveal the winding crown — topped again with a blue spinel or sapphire — to enhance the preciousness and ergonomics of the watch. For an extra personalised touch, the new Pasha will see a small area just below the crown which can be engraved with initials.

Two sizes will be available at launch: A 41mm with date and a 35mm without. While both can be had in steel, which would undoubtedly make a fantastic boardroom-to-brunch accessory, the gold versions (yellow gold for 41mm and pink gold for 35mm) still remain to be collectibles destined as heirlooms.

While genetically very similar to the 1985 introduction, the new Pasha isn’t without modern conveniences. The quick-change QuickSwitch system means you can switch straps with ease, doubling your mileage, in this case. In the steel bracelets, this accessibility goes a notch higher with the SmartLink system, which allows for the adjustment of the bracelet without additional tools. Simply add or remove links via a push button.

Inside, the Cartier caliber 1847MC runs the show. Technically more advanced than its predecessors, the in-house movement sees a power reserve of 40 hours, and is impervious to magnetism and water resistant to 100m.

Even with its oddities, the Pasha de Cartier remains to be a gem, for both its ability to intrigue and for its dedication to conserving a very unique identity aesthetic. With a name that’s essentially a title granted only to high officials in the Ottoman Empire, having a presence — even an idiosyncratic one — is all part of the business. After all, it’s not a watch that was made to please everyone, but only those who matter enough.

Style Watches Cartier Luxury Timepieces in the loupe
Shatricia Nair
Managing Editor
Shatricia Nair is a motoring, watches, and wellness writer who is perpetually knee-deep in the world of V8s, tourbillons, and the latest fitness trends. She is fuelled by peanut butter and three cups of coffee a day.
Motoring Wellness Watches Beauty Style
Sign up for our newsletters to have the latest stories delivered straight to your inbox every week.