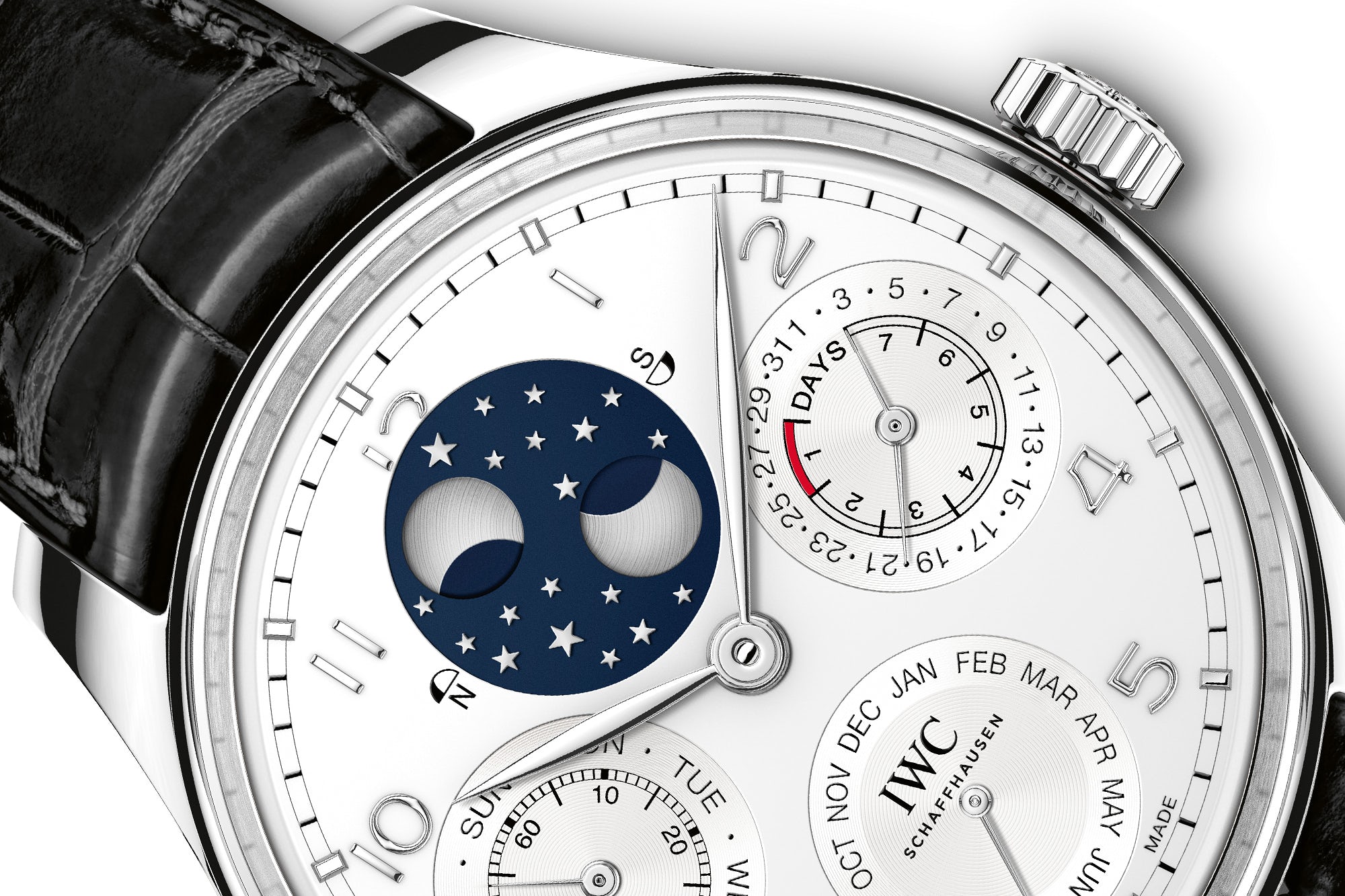 2018 has been a busy year for the folks at IWC but there’s reason to celebrate. In tandem with its 150th birthday is a host of anniversary models (remember the idiosyncratic Tribute to Pallweber Edition 150 years?) and a new Pilot’s Watch Chronograph, amongst a few others.

Now, the brand’s making waves again with two new models, this time adding a new perpetual calendar in platinum and a stainless steel automatic model to the seminal Portugieser family.

It looks exactly like its hallowed platinum counterpart, and is easier on your wallet too. Three years after its first foray into the world, the Portuguese Automatic 7-Days remains the modern classic to turn to, even in its second generation.

The new variant sees a stainless steel case with a silver-plated dial, and rhodium-plated hands and hour numerals — exactly the same as the first generation’s flagship. Only this time, it’s not a limited edition 500-piece watch that costs thrice as much.

Nothing’s been updated on the mechanical end, and it’s still powered by the automatic cal. 52010. Its twin barrels well equip it with a week’s worth of power, indicated by the power-reserve indicator at three o’clock. Like most self-winding in-house movements by IWC, the caliber is endowed with its proprietary bi-directional Pellaton winding system, made to maximise the energy that’s generated by the rotor’s movements.

Paired with a discreet black alligator strap, the 42.3mm dress watch will easily spruce up any ensemble.

The perpetual calendar has always been a good-looking high complication in the Portugieser line-up, and its marriage with platinum makes this one to keep in the collection for a long time. It’s also the first in the series to incorporate legendary IWC watchmaker Kurt Klaus’ perpetual calendar mechanism into a case made from the precious metal.

Klaus’ crown-operated system was originally built on the Valjoux 7750 and can track the date, days, and months without being reset until 2100 — leap years included. It was considered a milestone for its time, as well as for the Swiss firm and the horological world.

Now, the complication is powered via the IWC 52615 calibre, an in-house automatic movement with a winding system that’s developed by Klaus’ mentor Albert Pellaton. Fitted with ceramic components, the mechanism is practically wear-free, and builds a week’s worth of power reserve with its solid 18k red gold oscillator.

Add to the fact that platinum is corrosion-resistant, robust, and virtually indestructible, and you’ll have a watch that will withstand the test of time. Its silver-plated dial is quietly sophisticated, with the usual fanfare neatly presented in four subdials. The beloved “double moon” moon-phase indicator makes a comeback (it was present in the first edition) and gives an inverted view that takes into account both the northern and southern hemispheres. The accuracy of the display is astounding — it’ll only deviate from the actual orbit of the earth’s satellite after 577.5 years.

Talk about (almost) lasting through eternity.