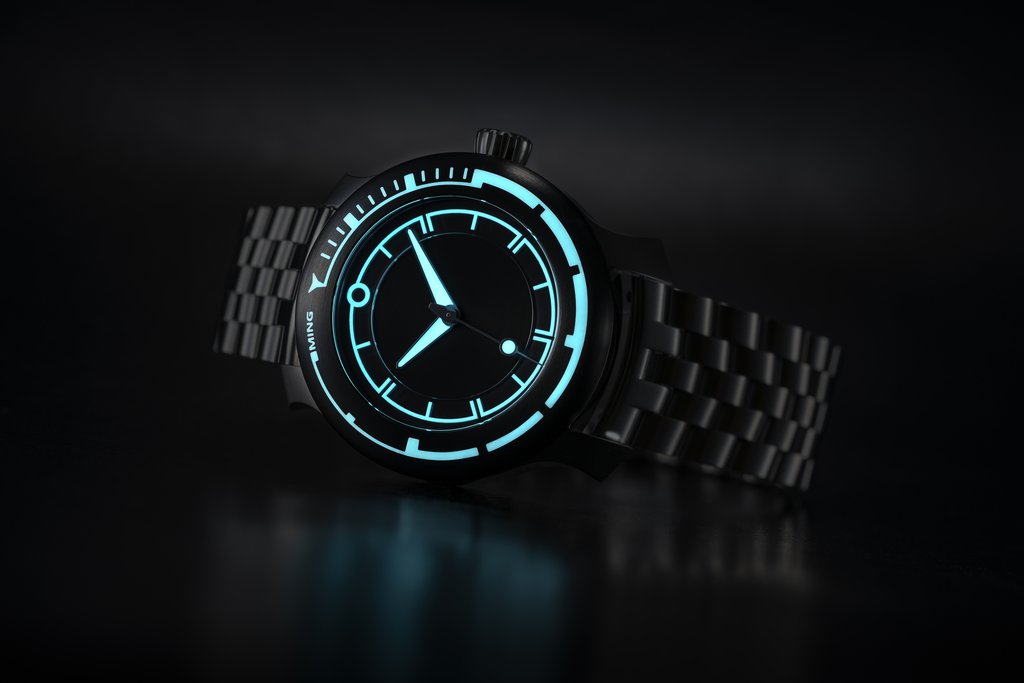 There isn’t a lack of young and bright minds in the watch industry — and heaven knows we’ve seen dozens break through over the years — but few have displayed the same grit, grace, and gravitas as Ming Thein has.

Despite only being established in 2017, the Malaysian watchmaker and his eponymous firm has garnered quite a substantial following, more so since he’s been recognised twice by the Grand Prix d’Horlogerie de Geneve. This year, he continues his streak by venturing not into dressy two-handers or GMTs, but into deep diving territories — we’re talking 1,000m beneath the surface of the ocean.

Riding the waves of his limited edition Abyss concept last year, the Ming 18.01 H41 is the latest to see his distinctive design language being translated into a bold, highly functional diver. At 40mm, the watch is a comfortable fit for most, with a titanium case that doesn’t deviate far from the brand’s already-recognisable shape despite being tweaked for underwater use.

A blend of polished and brushed surfaces lend dimension to the timepiece, but if you’re in the market for a black watch, an optional black DLC coated version is also available. The watch’s silhouette is then punctuated by his trademark flared lugs. Interestingly, the unidirectional bezel receives no knurling whatsoever despite being a vital dive watch component, but the watchmaker states it’s still easy to grip even with wet hands.

Like the case, the dial retains Ming’s clean aesthetics, more so in the dark with its hefty lume fill. The hour track here takes illumination a step further with HyCeram, an advanced formula that sees Super-LumiNova X1, ceramic, and sapphire mixed for a three-dimensional effect. This is also the only Ming production model with a running seconds hand, accompanied by the usual rounded dauphine hands that he typical uses.

At its heart lies the ETA 2824-2 automatic, a workhorse movement modified by the brand’s movement partner Manufacture Schwarz-Etienne that’s particularly reliable (it’s been through an intensive 250-hour testing program) and has a 40-hour power reserve at 28,800 bph.

Ming’s first production diver isn’t the only good news here; he’s also released a new “universal” bracelet in titanium to go with the watch. Created to complement the case shape with its rounded multi-link design, the bracelet is a classy take on his usual curved straps, and should extend the mileage of this watch beyond the open waters. It’s also designed with half and ⅔ removable links for a precise fit on any wrist, and is reversible to make it easier for left-handers. The other alternative is a black rubber strap with white contrast stitching.

As with all of his timepieces, the Ming 18.01 H41 is currently sold out but more will be available on 22 August here. Prices start from CHF 2,950 (approx. S$4,410), which is remarkably affordable for a watch of this caliber, so trust us when we tell you to  start camping online early.

Style Watches Timepieces ming
Shatricia Nair
Deputy Editor
Shatricia Nair is a motoring, watches, and wellness writer who is perpetually knee-deep in the world of V8s, tourbillons, and the latest fitness trends. She is fuelled by peanut butter and three cups of coffee a day.
Motoring Wellness Watches