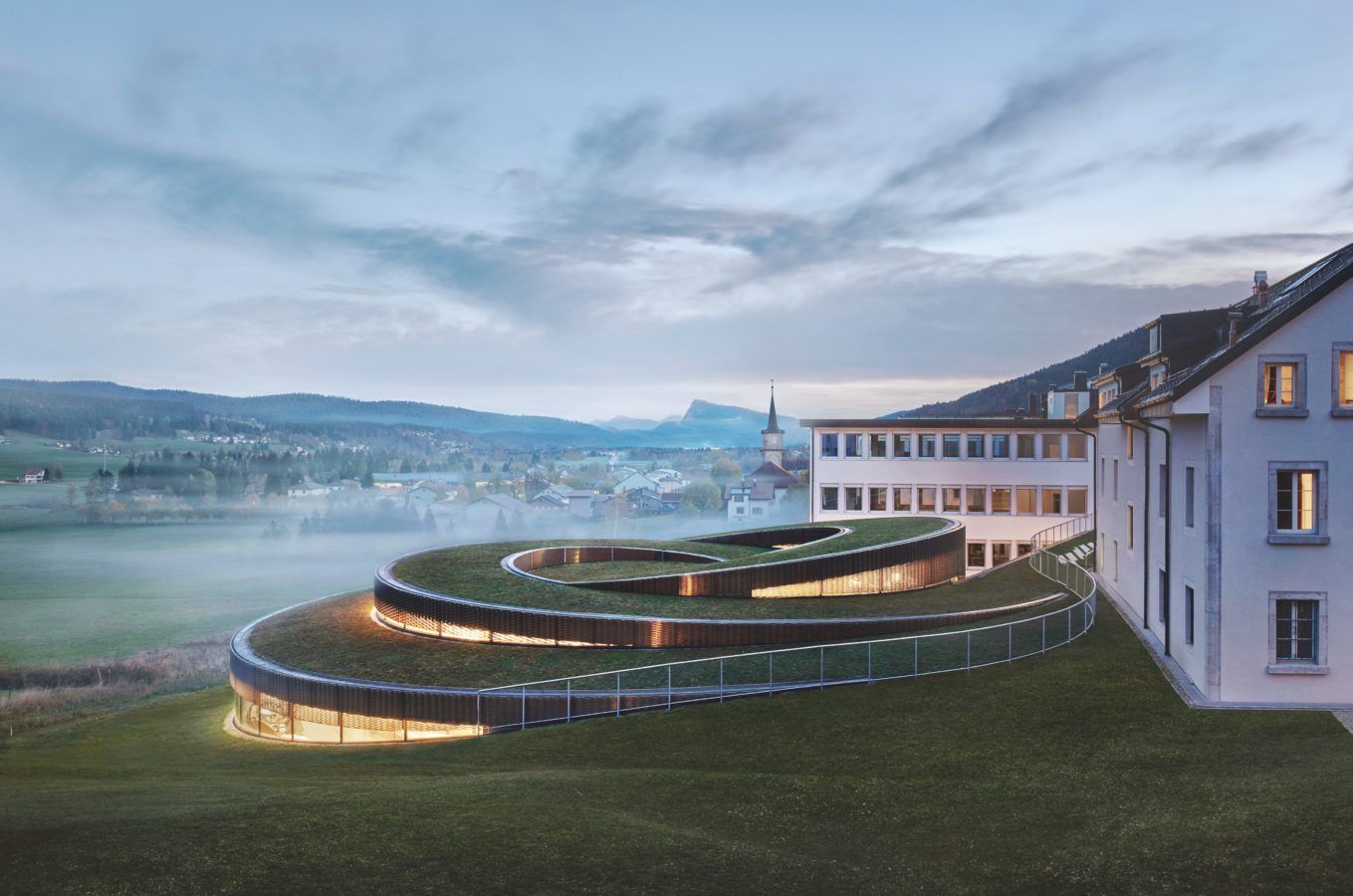 Audemars Piguet’s 145-year journey has seen a tremendous number of world firsts when it comes to haute horologerie, so it was only a matter of time before these unrivalled feats found homes within a museum.

And not just any museum. Set in the postcard-worthy landscape of Vallée de Joux in Switzerland, the new Musée Atelier Audemars Piguet is a real sight to behold. Despite spiralling upwards from the earth quite dramatically, the sprawling landmark manages to blend seamlessly into the landscape like a hedge labyrinth — a metaphor, perhaps, to the brand’s penchant for respecting tradition while pushing the boundaries when it comes to watchmaking.

Flanked by the original Audemars Piguet workshop, the avant-garde museum is the work of in-demand Danish architect Bjarke Ingels’ firm BIG, who’s also worked on Google’s HQ in Mountain View, California. The firm took particular care in ensuring the new 25,000-square-metre structure was —quite literally — kept in Audemars Piguet’s roots, and so replaced the parking lot of the old manufacture with this groundbreaking design instead.

The museum could’ve been inspired by any of the many parts of a timepiece, but it was ultimately the hairspring that did it for BIG and Swiss architecture office CCHE, the latter of which realised the building. Besides an allusion to the beating heart of every mechanical watch, the coiled shape was a way of blending into the dreamy watchmaking village of Le Brassus, despite the fact that it would, too be right at home in Silicon Valley with its futuristic curves. A grass-covered roof means that you’ll see a well-manicured lawn during the summer, and an ethereal snowy scene for winter.

Inside, the curved glass walls converge in a clockwise direction to channel visitors through the building’s various exhibits. To ensure an unadulterated view both inside and out, BIG designed the glass walls to be load-bearing, eliminating the need for columns or walls. The idea of fragility and sturdiness here draws references from mechanical watches, which house minuscule components that hum away with precision under sturdy metal cases.

German architect studio Atelier Brückner was in charge of the exhibition spaces, which feature some 300 watches from the brand’s collection, and two ateliers where visitors can watch its watchmakers at work. The Grandes Complications workshop will tell the tale of how the most complicated watches are painstakingly assembled from hundreds of parts over the course of months, while the Métiers d’Art workshop showcases the haute joaillerie gem-setters at work.

You might also like…
Style
In the loupe: Audemars Piguet’s Royal Oak, a modern icon that saved its company
Style
Audemars Piguet has quietly dropped two precious metal versions of the Royal Oak

Highlights of the watches on display here include the world’s first perpetual calendar watch with a leap year function, and a watch purchased by the Shah of Iran in 1884. There’s also a section dedicated to the brand’s ultra-thin watchmaking, a division of which the brand is very proud of.

At the centre of the spiral sits the Universelle — Audemars Piguet’s most complicated watch from 1899 — as other astronomical watches surround it like planets in a solar system. Displays and moving models give visitors an insight into how the inner workings of the watches, and aspiring watchmakers can even try their hand at assembling.

It’s almost poetic that the show begins with a single stone and ends with the “rock” of Audemars Piguet’s modern identity — the Royal Oak. The stone, which comes from the surrounding forest, pays tribute to the village’s rich iron mining and metallurgy heritage, which eventually led it to become one of the most respected in the world.

The giant jewel box is truly a showstopper for the otherwise historical village, and is now open to visitors via reservations, especially for those who want to steep in both amazing architecture and historical watchmaking at the same time.

Watches Audemars Piguet Architecture Switzerland Museum
Shatricia Nair
Managing Editor
Shatricia Nair is a motoring, watches, and wellness writer who is perpetually knee-deep in the world of V8s, tourbillons, and the latest fitness trends. She is fuelled by peanut butter and three cups of coffee a day.
Motoring Wellness Watches Beauty Style
Sign up for our newsletters to have the latest stories delivered straight to your inbox every week.