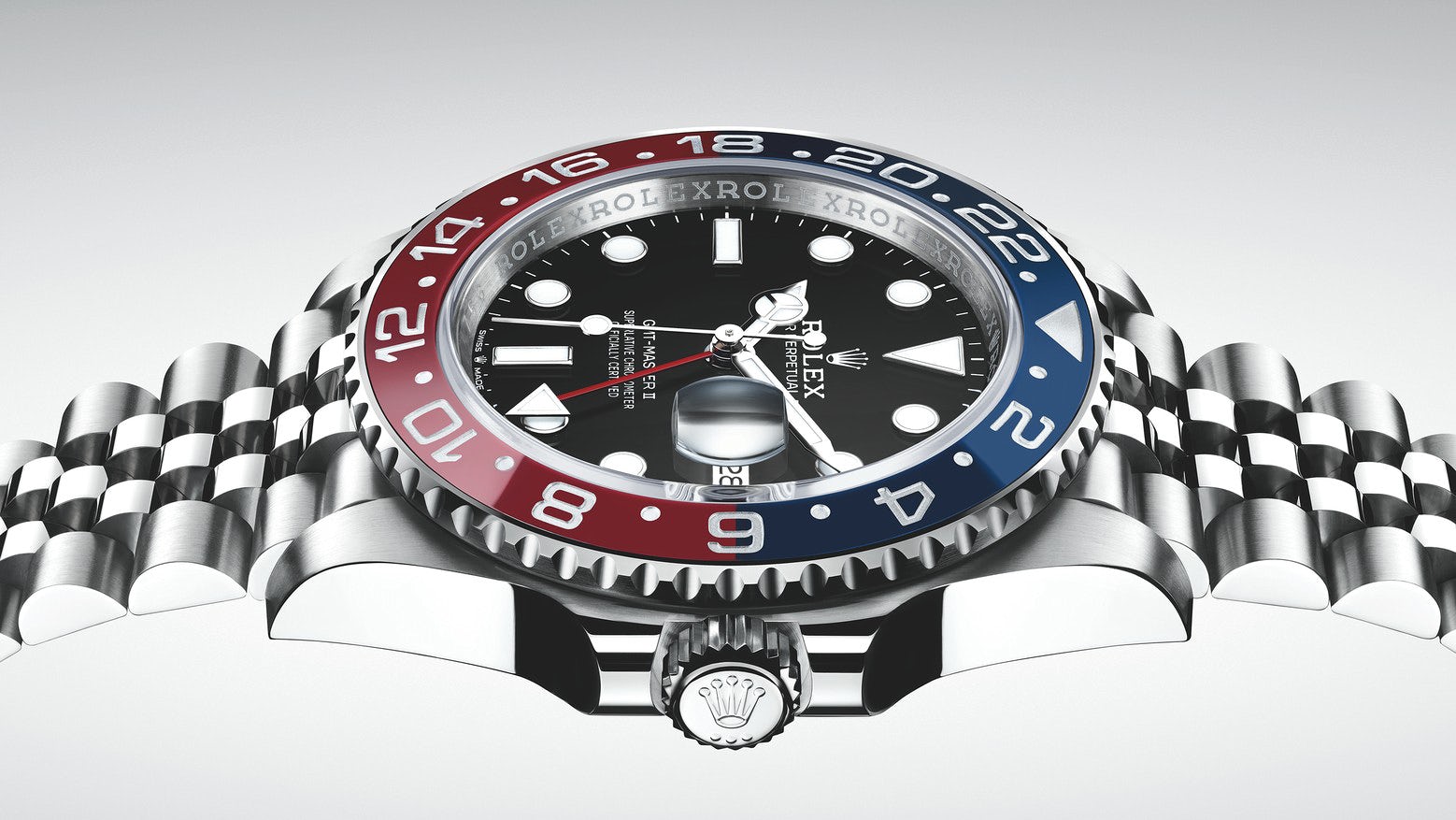 Baselworld 2018 didn’t see a shortage of to-die-for timepieces, but one really stood out amongst the chatter, online mentions and Instagram feeds that followed. This watch was the Rolex GMT-Master II, which not only sports the famous and highly sought-after “Pepsi” bezel, but also the long-missed Jubilee bracelet — two features which catapulted the new offering to instant (and Insta) fame.

Now there are few Rolex watches more evocative than the GMT-Master, which was initially marketed in 1955 as the quintessential “tool watch” for anyone from Pan Am pilots and ship captains to the well-heeled, jet-set crowd. The proliferation of passenger jets had begun to shrink the world; people found themselves crossing the Atlantic and into a new time zone in less than half the time.

The dual-time watch was a sign of the times, and Rolex knew just how to make its creation synonymous with the useful complication.

A red and blue 24-hour bezel — which appeared on the very first GMT-Master and inspired the nickname “Pepsi” —  can be rotated to be read against a 24-hour hand. This graduated insert was first made from Plexiglas, with the colours, numerals, and graduations painted on the reserve. Now, it’s fashioned out of the proprietary Cerachrom, with red and blue ceramics that are particularly resistant to corrosion, scratches, and the dulling effects of ultraviolet rays. It’s also a manufacturing masterpiece — red is notoriously difficult to achieve with ceramic, plus a sharp delineation has to be created between the two colours.

The ceramic’s sheen enhances the colours in the same way as the Plexiglas once did, as with the rest of the watch’s iconic aesthetics. A thin layer of platinum is then coated onto engraved numerals and graduations, giving a three-dimensional effect for enhanced legibility, enabling travellers to easily tell the time in two places despite being physically and mentally weary.

Then there’s the Jubilee bracelet. First introduced in 1945 to commemorate the company’s 40th anniversary, the robust yet dressy style is an iconic five-piece metal-link bracelet that was only reserved in recent years for the Datejust models, until now.

Fans will recognise the same ribbon of glinting small links, flanked on both sides by a tapering line of satiated links. Like the rest of the watch, it’s also made in Oystersteel, a steel variation that’s more corrosion-resistant.

But more than an iconic bracelet and even more iconic bezel is the new calibre within the brand new Rolex GMT-Master II. Christened the calibre 3285, the self-winding mechanical movement conceived 10 patent applications during its construction. The patented and more efficient Chronergy escapement — which debuted in the calibre 3255 — provides 70 hours of power reserve, an improvement from 2014’s version with 48 hours.

It’s also magnetically inert, and like the previous versions, allows the GMT hand to be set independently from the hour and minute hands. Of course, it’s not just COSC chronometer-certified. Rolex has developed stringent testing methodologies and new high-technology equipment to certify each of its watches and award them the status of Superlative Chronometer. This exclusive designation attests that every watch has successfully undergone a series of special final controls conducted by Rolex in its own laboratories, exceeding watchmaking norms and standards in terms of precision, power reserve, waterproofness and self-winding. The precision of a Rolex Superlative Chronometer after casing is of the order of −2/+2 seconds per day, or more than twice that required of an official chronometer.

But Pepsi isn’t the only soda that’s gotten Rolex’s suitors in a frenzy. This year, the sepia-tinted “Root Beer” version makes its way back in two versions: One made entirely from 18 ct Everose gold and the other, an Everose Rolesor version with a hybrid Oystersteel bracelet. The same 24-hour graduated two-colour Cerachrom insert is a complementing black and brown, with inscriptions on the dial filled by powdered rose gold.

All three watches have an outer ring with repeated “Rolex” engravings encircles the black dial. Set in a traditional Rolex GMT-Master II configuration, the black lacquered dial on all three watches sees a highly legible Chromalight display with blue luminescence. A Cyclops lens date indicator remains at its 3 o’clock position, and performs in perfect harmony with the local time display.