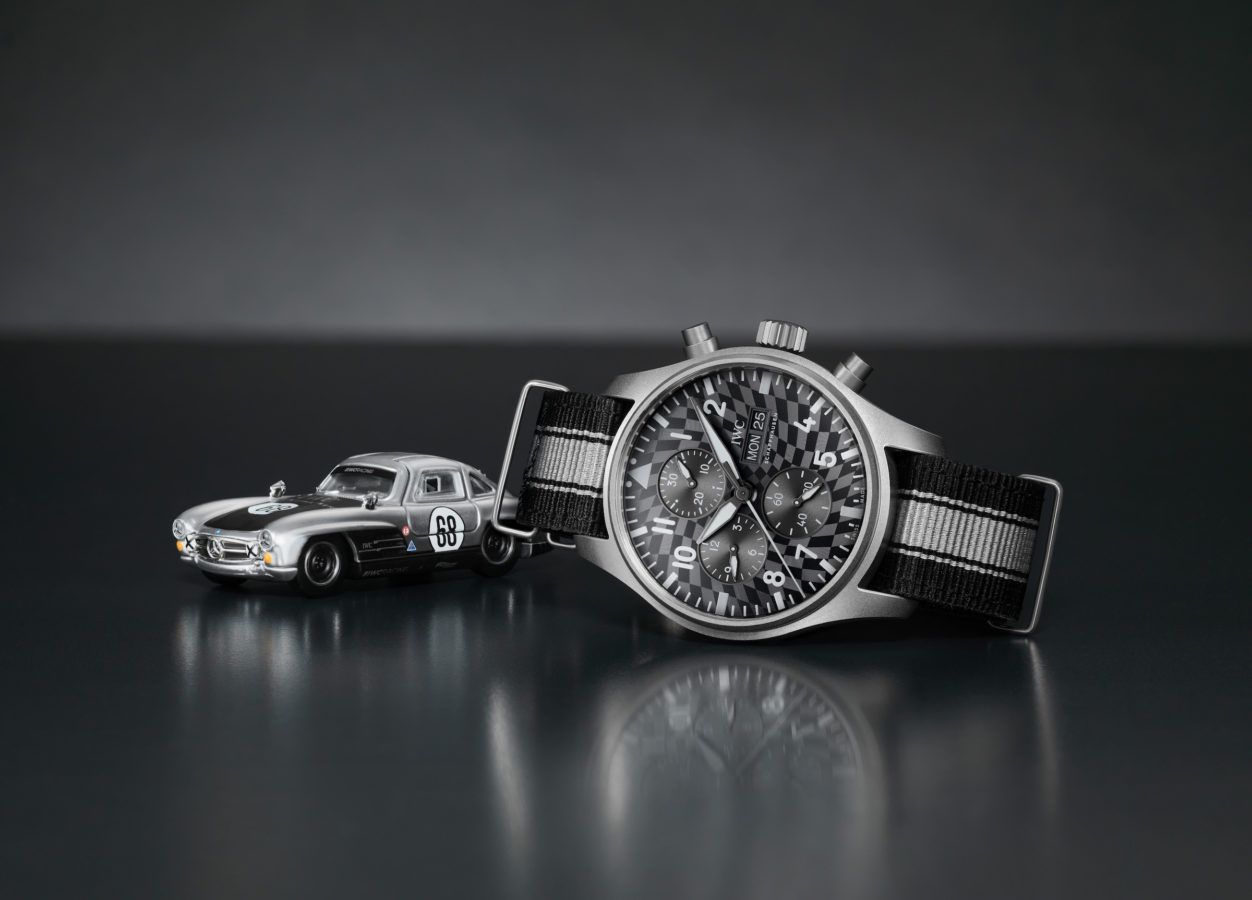 New watches unveiled in October 2021 to feast your eyes on.

As the world celebrates Breast Cancer Awareness Month, horological brethren have banded up for an auction of unique watch pieces. Proceeds will be funnelled into selected breast cancer charitable organisations and foundations, to fund their ground-breaking research and day-to-day operations.

In November, the biennial Only Watch charity auction will return for the 9th edition. One-off timepieces will go under the hammer on November 6. Proceeds will be raised for the benefit of Duchenne muscular dystrophy research.

Amidst the buzz surrounding these well-meaning causes, watch brands have unveiled a constellation of novelties as the concluding quarter of 2021 kicks in.

Here are the new watches launched in October 2021: 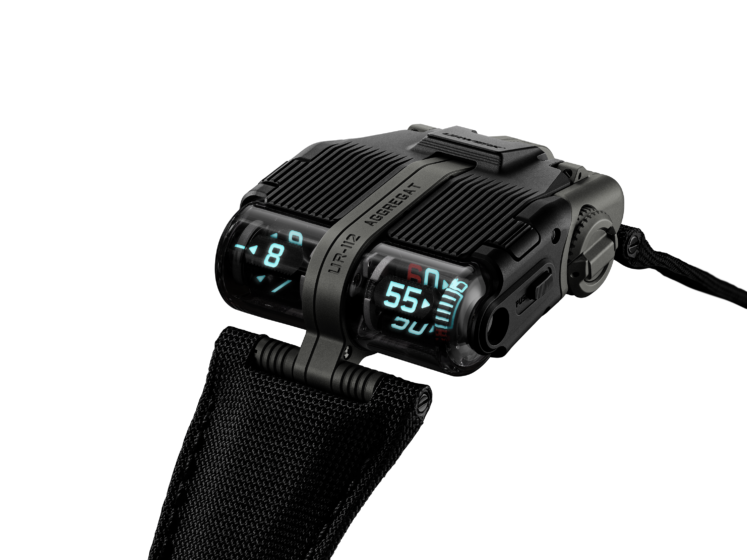 The latest avant-garde creation by Urwerk is an exceptionally technical reinterpretation of timekeeping. Liberated from traditional constraints and practices, the watch displays such information via jumping digital hours and running digital minutes. Made of triangular satellite prisms, the hour on the left adopts an instantaneous switch, while the minute on the right motions in 5-minute increments.

Both work in a chronometric sync as the force amassed by the advancement of the minute is stored as torque to power the changing of the hour. That’s not all. Underneath the titanium hood of the UR-112 Aggregat reside the digital second and 48-hour power reserve indicators. The watch is limited to 25 pieces. 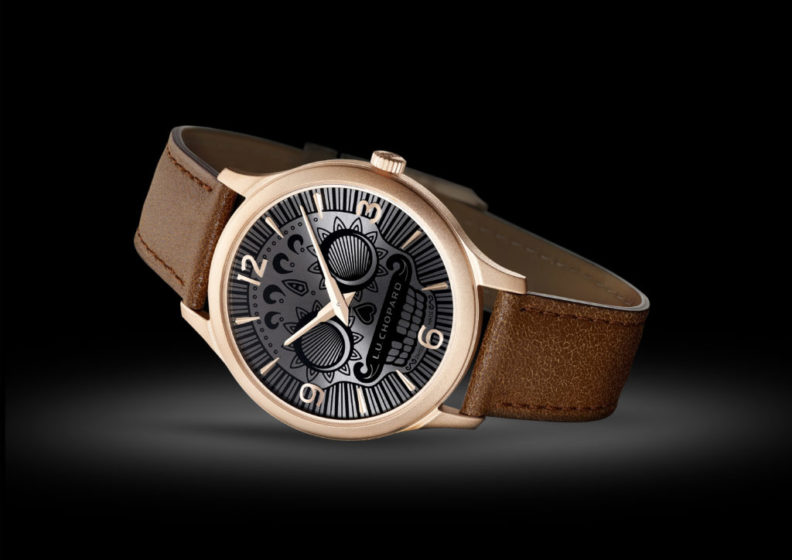 Limited to a mere 8 pieces in bead-blasted ethical 18k rose gold, Chopard’s dressy L.U.C takes on vanitas, a genre of art revolving around the transience of time and impermanence of life. While the incorporation of the skull in artwork can be found in numerous cultures, it takes on a heightened cultural significance in Mexico where festivals lasting days are dedicated to this eerie motif and lines between cultural traditions and religious teachings are blurred.

As a tribute to the Día de los Muertos, the watch dial highlights a Mexican calavera, combined beautifully with lacquer and gilded hour-markers. Like all L.U.C novelties, the Skull One runs on an in-house movement. Limited to 30 pieces each in polished titanium, red gold and platinum, the Bovet Battista Tourbillon is a superlative inspired by the world of luxury automobiles. The muse is the Pininfarina Battista, a stunning pure-electric hyper GT. The design philosophy from the vehicle flows smoothly onto the timepieces. This can be witnessed by the sheer amount of shared aesthetics and references.

The timepiece features a brand-new movement using Bovet’s patented double face tourbillon. Despite the demanding energy requirement of the tourbillon, the timepiece boasts a remarkable 10-day power reserve. Not unlike the bespoke vehicle, each Bovet timepiece is handcrafted and assembled. Luxury takes no shortcut, nor does Bovet. 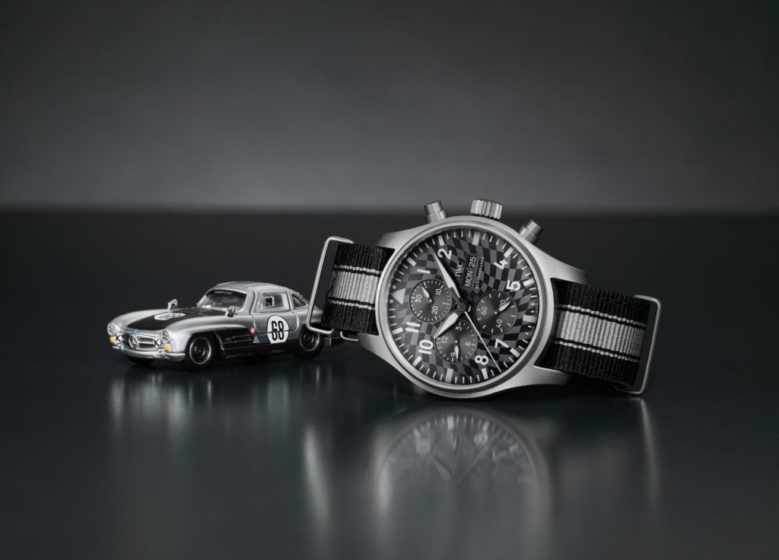 The relationship between motorsports and horology is akin to a ballerina with her ballet shoes – intertwined and symbiotic. IWC Schaffhausen and Hot Wheels join hands to celebrate the 78th Goodwood Members’ Meeting with the IWC x Hot Wheels Racing Works collector’s set. 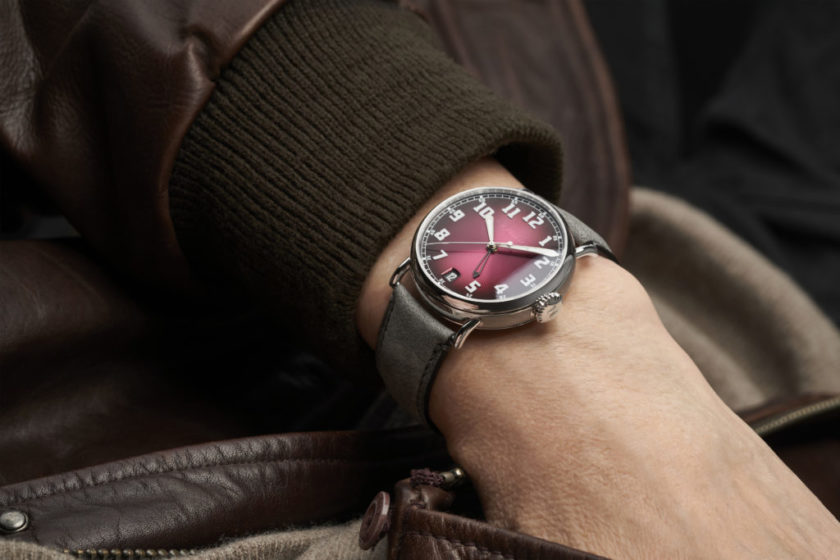 Drawing inspiration from pocket watches and early 20th-century models archived in the Moser Museum, the Heritage Dual Time is H. Moser & Cie. honouring its own rich history. The new watch is aptly imbued with touches from yesteryear. These include tapered lugs, a white railway minute track, a large notched crown and a resolutely classic palette thanks to the Burgundy fumé dial.

Don’t be fooled, however, as Moser deftly imparts modern elements into the watch. The applied numerals, for example, are made of Globolight, an innovative ceramic-based material containing Super-LumiNova. The heart of the watch is the new HMC 809 self-winding calibre equipped with a module developed entirely in-house. 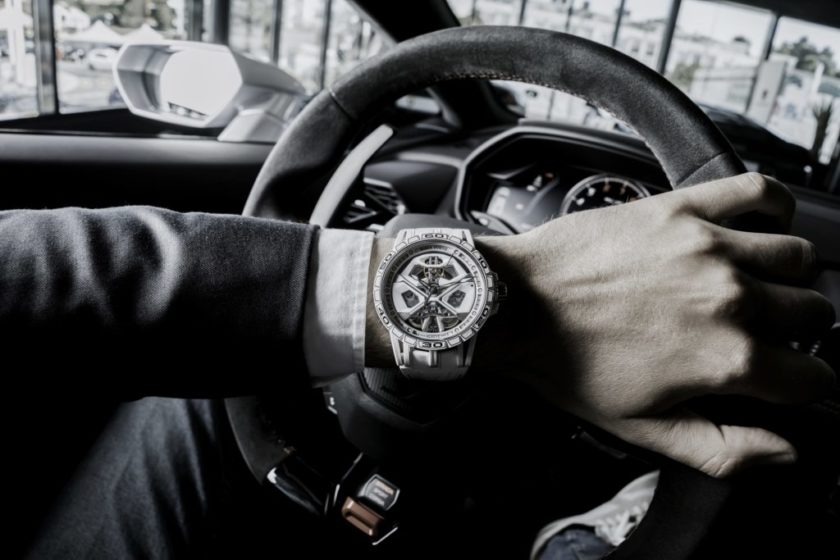 Thanks to its striking frosty white case made of ceramic composite fibre, the Excalibur Spider Huracán is a statement piece at once muscular and sexy. With an openwork showing the RD630 calibre, many of the watch’s facets elicit the adrenalin rush induced by the Lamborghini Huracán. When viewed from the back, the semi-skeletonised movement reveals the 360° oscillating weight reminiscent of the Huracán wheel rim.

The crown is further inspired by the supercar’s bolt and nut. In addition, the twin barrels and a 12° tilted balance wheel represent Squadra Corse, Lamborghini’s motorsports division. An Excalibur model unlike any other Roger Dubuis has ever produced, this watch is limited to 88 pieces. 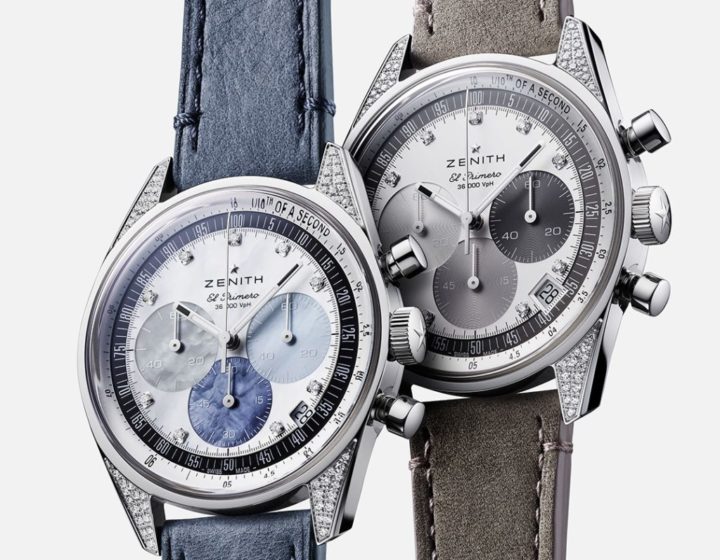 Ladies in search of elegant chronographs may consider the new Chronomaster Original. A product by the pioneer in integrated automatic chronograph movements, the new interpretations spruced up with mother-of-pearl and diamonds echo Zenith’s other famous timekeepers. This is evident in the inclusion of the tri-colour dial.

The first reference features an iridescent palette rendered in 4 distinctive types of mother-of-pearl, while the second reference plays with varying shades of taupe-brown. Apart from diamond hour markers, the lugs are also embellished with precious stones. 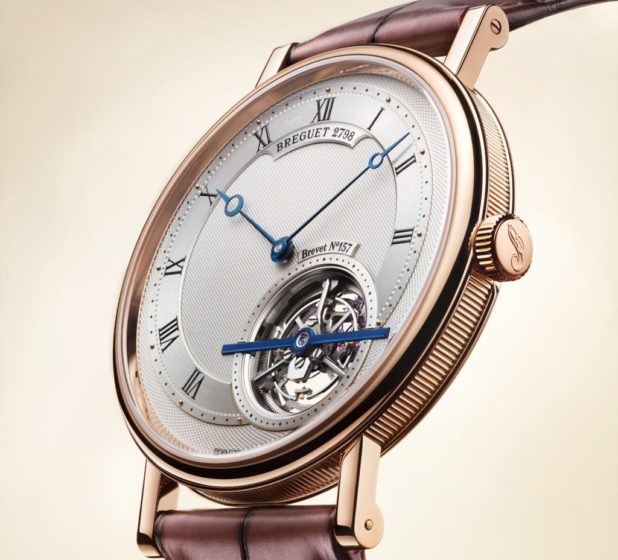 Nodding to the invention of the manufacture’s founder, Abraham-Louis Breguet, the Classique Tourbillon Extra-Plat Anniversaire 5365 aptly features the most ancestral form of the tourbillon. This tribute piece is produced in 35 numbered pieces, equalling the number of tourbillons produced by Breguet in his lifetime.

Patented by Breguet in 1801, the tourbillon regulator was brought to life to neutralise gravitational effects on chronometry. The tourbillon, however, isn’t the only Breguet signature on the watch. Here, you will encounter other hallmarks such as Breguet hands, hand-guilloche dial in grain d’orge and fluted case band. 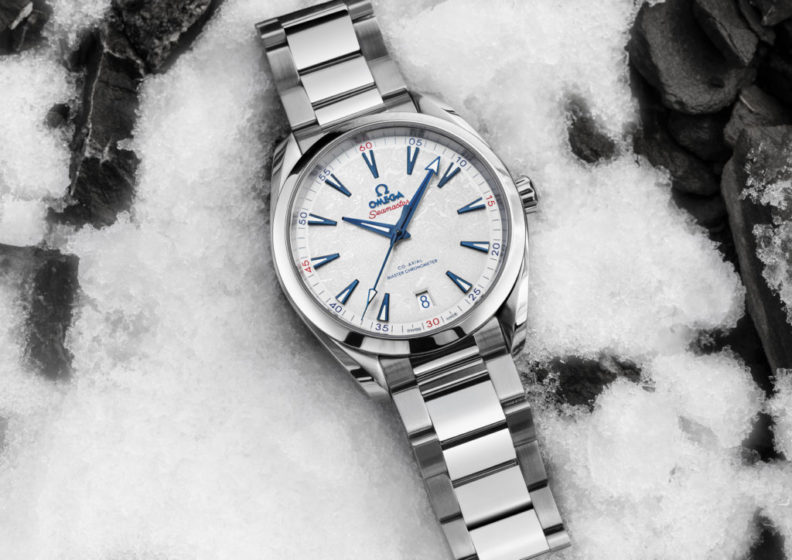 Reprising its role as the official timekeeper for the Olympics, Omega celebrates the momentous affair with a new watch in October 2021. The Seamaster Aqua Terra Beijing 2022 was unveiled to mark the inauguration of the Olympic Winter Games Beijing 2022.

Sporting a wintry, pristine palette, Omega subjects the white ceramic dial to a frost-finish pattern. The predominantly white surface is decorated with blued indexes, while the quarterly numbers on the minute track are redressed in red. The rest is very much expected of an Aqua Terra such as the Co-Axial Master Chronometer Calibre 8900 and waved edging.

Learn more here
IWC Watches Casio Zenith Bovet new watches 2021
Justin Ng
Digital Content Director, Kuala Lumpur
Often think of myself as a journalist and so I delve deeper into a range of topics. Talk to me about current affairs, watches, travel, drinks, new experiences and more importantly, the business, economics and dynamics behind it.