Omega has released the latest addition to its popular Speedmaster line-up.

It is known simply as the Speedmaster Alinghi and named after Ernesto Bertarelli’s sailing team. The Alinghi is a curious addition to Omega’s expansive backlog of nautically-themed commemorative releases, built around the same basic design as the Apollo 8 (what Speedy enthusiasts refer to as the ‘Dark Side of the Moon’).

In 2018, the brand produced a one-off Seamaster Planet Ocean for use by Emirates Team New Zealand. This year, it celebrates its selection as timekeeper for the venerated 36th America’s Cup yacht race with a themed release, limited to 2,021 pieces.

In that sense, the decision to put what is traditionally seen as the definitive space watch on open water seems like a bizarre one — until you consider that the essence of yacht racing is speed. To be sure, the Alinghi is perfectly capable of taking a dip should that need arise (the case is water resistant to 50m) but its primary drawcard is a mix-up of mechanics and construction. 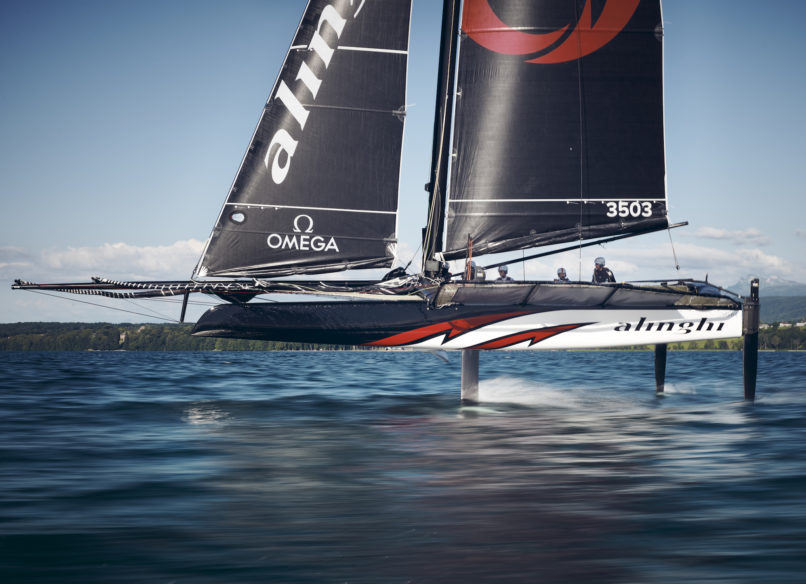 This article was first published on Lifestyle Asia HK. (All images courtesy of Omega)

Omega Omega Speedmaster Omega dark side of the moon New Watches 2020
Randy Lai
Editor
Having worked in the Australian digital media landscape for over 5 years, Randy has extensive experience in men's specialist categories such as classic clothing, watches and spirits. He is partial to mid-century chronographs and a nice chianti.
Style Watches Drinks Tailoring Travel